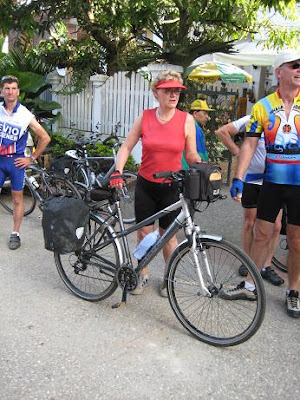 One of the joys of bicycle touring is the many interesting people we get to meet. Those on bicycles particularly become instant friends. I guess we share the same passion and values in exploring and experiencing a new land on our own power.

The Grasshopper Tour gang - There were 11 Dutch cyclists who stayed at our Oudumaxi Guesthouse in Luang Prabang when we arrived. Many of them were in their 50s and it was encouraging to know that they too were going down from LP to Vientiane - though with support vehicles and guides. At US$1850 per pax, they better! The standard issue was a Trek hybrid bike but some brought their own hi-end machines like a Koga Miyata and a Burley tandem with all the nice bits. They did not look like hard core cyclists but more like on a packaged tour. But then again, they are Dutch so cycling is in their DNA. 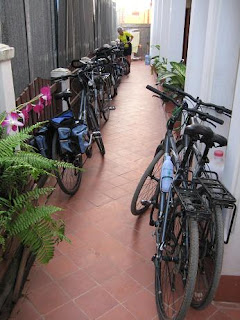 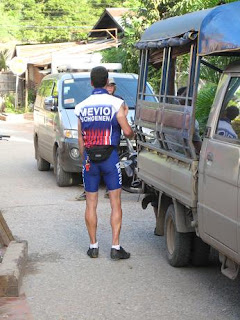 Do those climbs regularly and develop these awesome legs + tight butt!

3 Melbournites - The trio of 2 guys and a lady cruised in with their custom bikes while we were having breakfast in Vien Vang. What caught my attention is that they were following a CGOAB journal (Jan Hountermans - http://www.crazyguyonabike.com/doc/?o=3Tzut&doc_id=4338&v=GM ) to the tee and had printed all his entries neatly in a folder. Again, they were mid-lifers and the lady did not seemed too pleased in having to tag along with the 2 blokes. Wonder why? 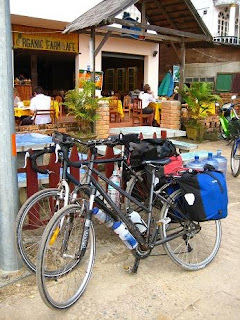 Melbournites having an organic breakfast

Mr Brisbane Busted Knee - We got all excited when we saw a fully loaded Sora tourer with 4 panniers unloaded from a Tuk Tuk in VV. Shaun, a young 20ish man, rode all the way from Bangkok with a buddy and was doing 150kms daily - until he suffered knee problems. I felt sorry for him and hope he recovers. Lesson learn - pace and know yourself. 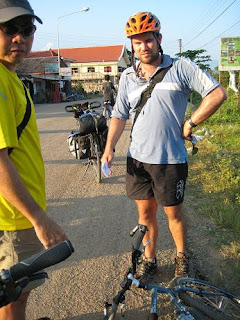 Team Belgium - Meerteen and Katrien cycled with us from KKC to Vientiane. We "suffered" together at Dung Rabbit Guesthouse. Truly enjoyed their company. They are in their 20s and newbies when it comes to bicycle touring but that did not stop them from buying new mountain bikes in LP and cycling to Vietnam. With just a helmet, bamboo improvised rack to carry their humongous backpack, no gloves, no cycling clothes, no map and no spare tube, they just went with the wind. They always managed to catch up with us eventually. Chris joked with them, "Ignorance is bliss" but there is something to be said about their fantastic sense of adventure. I lend them my LP Cycling book, hope it helps them. Hope you guys are having fun! 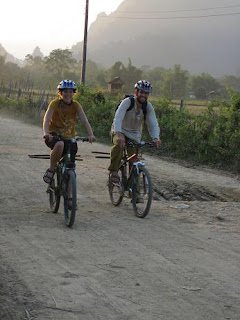 Monsieur Michel - I had the privilege to have breakfast with this French 62yo retired electrical engineer in Vientiane. He has been riding for 7 years on a hi-tech trike with a trailer and has been touring around the world, in his elegant long sleeve shirt and trousers. The Silk road, Turkey, China, South America - you name it, he has been there. Every 6 months though, he flies home to France to see his family and 4 grandkids. Bet they get all sorts of exotic presents.

On a normal bicycle, he covers 15km in an hour but on his trike, he does 12km in supreme arm chair comfort. He usually does 70km daily but has covered 150km. His trike + trailer + gear weighs 78kg and I asked how he tackled hills? Michel produced a tow rope and chuckled confidently, "Someone either on a motorbike or tuk tuk ALWAYS offers me a ride up!" This gentleman is my inspiration and he has got me looking into recumbents/trikes. 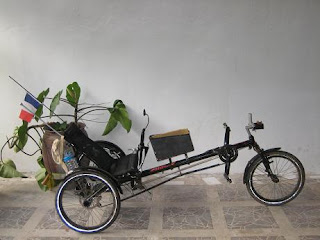 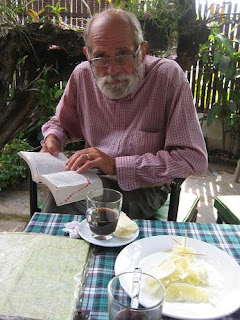 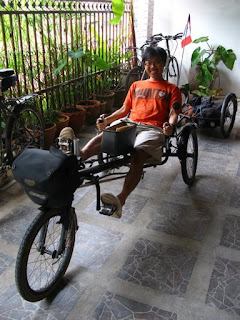 Posted by Oldyonfoldy at 7:18 PM

Laos looks like the cyclists destination. Seems like with the nice weather and scenary, this is a favorite destination for cycle tourists. Any idea if all of Laos is as densely populated with foreign cyclists?

Thus, many foreign cyclists but its far from being swarmed like ECP on a weekend. We see maybe 2-4 each day. Less so in the more remote parts.

You should try it.