Discovering Lingga with the Fellas - Day 1 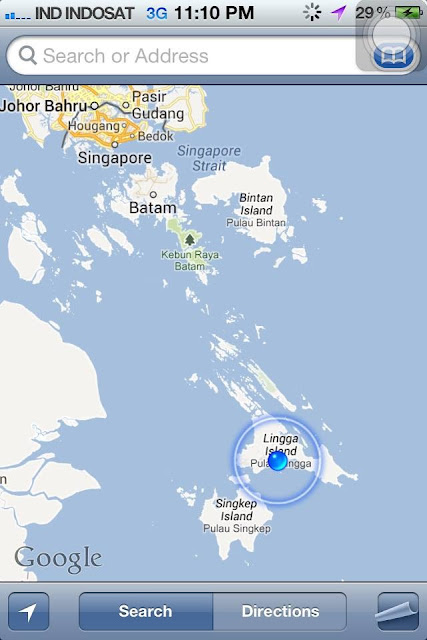 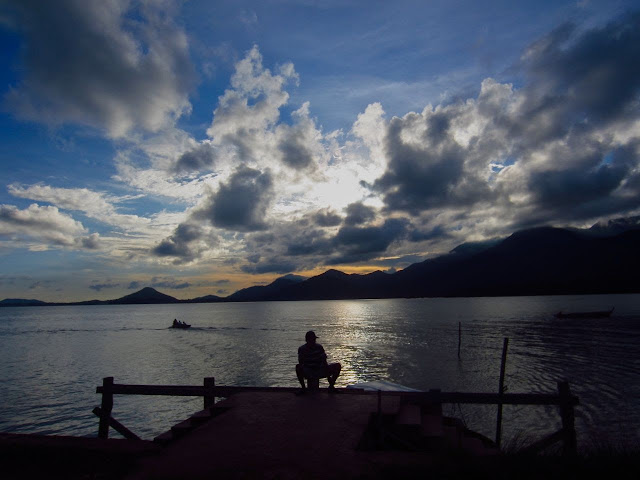 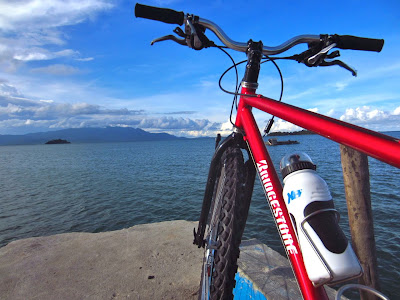 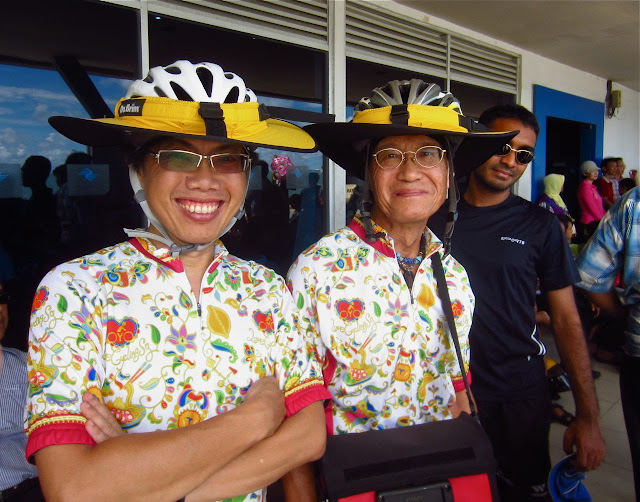 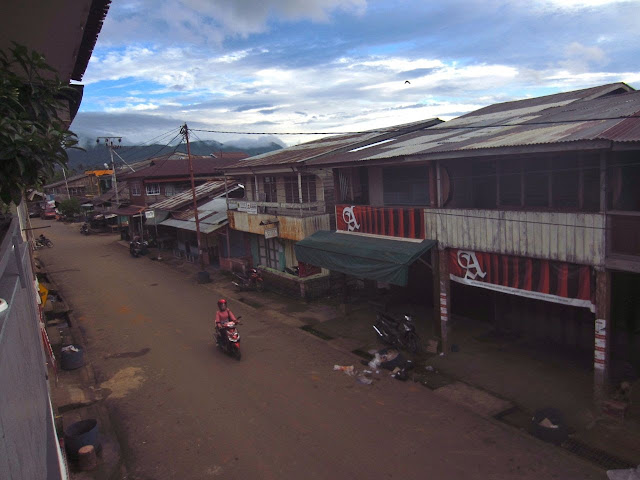 Since my last trip to the deep south of Riau in Dec 12 with the A Team, there has been a big itch to re-visit. I especially wanted to see the Lingga Island that lies opposite Singkep, as we missed that the last time. Its one of the biggest islands in the Riau, lengthwise at least. What fascinates about Lingga is its history where it once was a significant centre of strategic importance to the Malay Sultanate as well as the Dutch. Ruins of the Sultan's Palace and Dutch 18th century cannons are some of the remnants of its rich heritage and can still be seen in this quiet and unspoiled island that sits just at the equator. The origin of the name Lingga is the Sanskrit word for the male reproductive organ, inspired no doubt by its beautiful peaks particular Gunung Lingga that stands 1163m. With low lying clouds surrounding its majestic mountains, Lingga is a sight to behold especially when seen from its sister island Singkep. 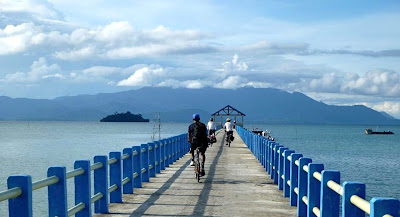 Our all fellas team this time consisted of Uncle KC who came with me in Dec, plus Mike Khor of Wheelopher fame and a most seasoned tourer from KL, Malaysia as well as a brand new cyclist from Singapore, my young friend Ravi. The 3 of us met at Tanah Merah at 745am to catch the Indofalcon ferry to Tg Pinang, Bintan. In our first surprise, Indofalcon turned us down because we had bicycles and their excuse was that their ocean crossing ferry was too small to take our bikes! They pointed me to Wavemaster Ferry that welcomed bicycles and thank God that it left 920am, which still meant we could make the 11am (Indo time) connection to Dabo Singkep. And they are normally a bit late... 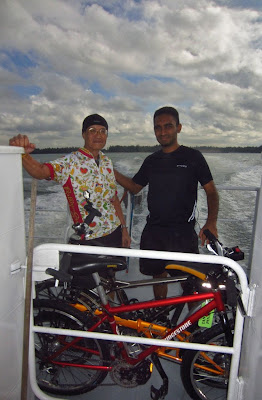 We arrived at Tg Pinang in just a whisker under 2 hours and as we cleared immigration, Mike was waiting for us at the end of the pier with the brightest of smiles, waiting only for 10mins. The change in ferry proved to be divine indeed. He had flown into Batam 3 days earlier and explored Bintan on his own. It was so good to see this fella and we heard his adventures over a coffee shop lunch of noodles and cold drinks. 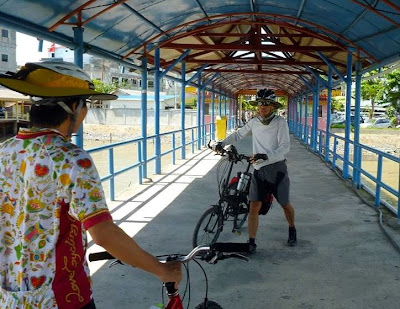 As this was going to be a long 3 hour boat ride, we brought snacks and drinks. Be warned too that it can be really cold inside as their aircon setting is stuck on one mode - freezing. Fortunately, the irritating singer with the crooked teeth on TV was replaced by a more pleasant lady who could really gelak (gyrate). But I was more intrigue chatting with the legend from KL and the trip seemed so short with great company.

This is a direct ferry with only one stopover at a remote island of Cempah and we arrived at Jago Jetty, Singkep at 3pm. Strangely, the public ferry for Lingga had already left at 230pm so a quick quote with a private operator was made. US$50 was what  he wanted and we decided to ride on to Dabo, 24km away. Just out of the jetty was a steep hill, not exactly a good start for poor Ravi who fortunately was on my very agile Dahon Speed Pro. 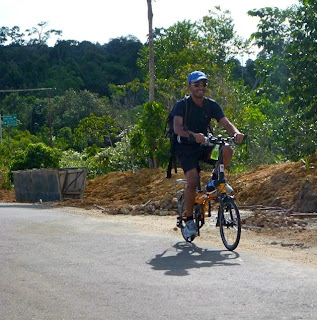 Climbing on my newly restored Bridgestone MB3 was easy and painless. 4km down the road we arrived at the beautiful and long jetty that overlooked the majestic mountains of Lingga. Our presence attracted the local boys and we asked them if they knew anyone who could take us to Lingga. Divine intervention came when a friendly local guy with a fast boat said he was happy to do so at US$35 one way and it was a sealed deal. We wasted no time to load our bikes onto his blue boat and were soon bouncing on the waves towards Lingga with the highest spirits. 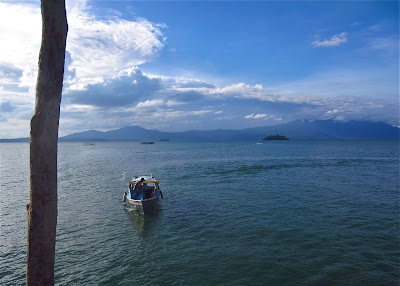 It was sheer magic zipping towards Lingga with the sun fast setting and we each took turns to steer the boat, and that was exhilarating. The feeling of fresh sea breeze and sea sprays on our face just took away any tiredness. 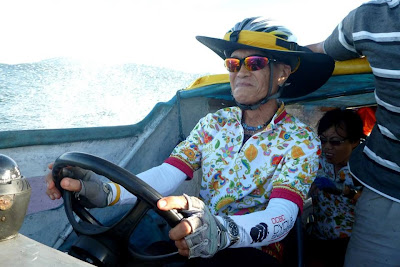 The 30 min ride ended all too soon and we arranged for a 4pm pickup the next day. With our bikes on terra firma once again, we set off to Daik, the main town 5km away and rode on brand new sealed roads. 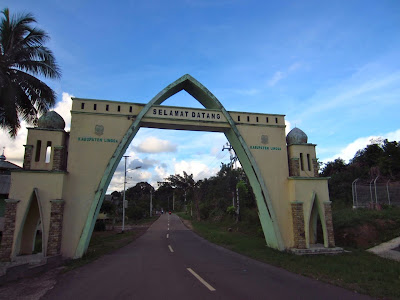 Traffic was literally zero in most parts and people here are very friendly. For such a remote town, Daik has a very rustic charm and surprisingly, there are quite a few Chinese people here with a Kampong Cina even. The presence of Chinese means decent food and that was helpful as it was Ramadan, the Islamic fasting season and food was not sold, openly at least in the day time. 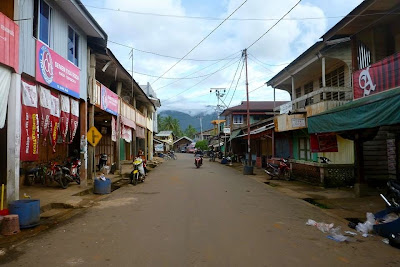 We checked out Sun Ling Hotel and that was grotty and smelly. Moving on to Hotel Persona along the main street, we were not impressed initially as the front was like a typical old run down shophouse. I reluctantly climbed the old wooden creaking stairs to the reception only to be greeted on TV by an American Evangelist sharing God's love. 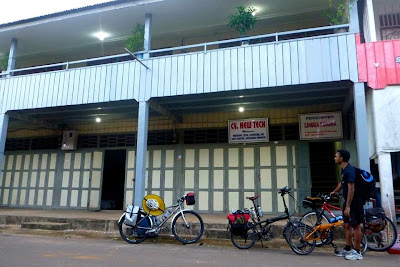 The staff were very friendly and showed us this surprisingly impressive hotel with 3 distinct sections. The first was the original old section, the middle an upgraded extension done maybe 10 years ago but last one was all modern and brand new befitting of a hotel in the metropolis of Batam. We settled for mid class and were happy with our aircon rooms at US$16 per night. Pari even led us later for dinner - Ayam Pengyet (fried pressed chicken) which was a simple warung that served the best fiery sambal ever. Mike was in heaven as he slurped down the sambal with raw cabbage, and we asked for seconds. 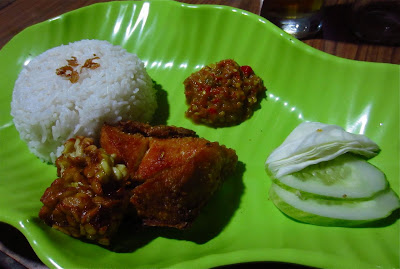 It was fun riding in pitch darkness, with sparkling stars and fresh kampong air. I was glad I brought along my Lenze headlight that lighted up the road. Looking for dessert, we stumbled upon a stall that sold fresh coconut and that was delightful. It was touching to see the family preparing our drinks together, cutting and scrapping the coconut fruit. We enjoyed this sense of simple life and friendly folks, feeling truly top of the world.

We cannot believe that the fellas were all finally at Lingga after 3 boat rides and traveling nearly the whole day to arrive here. Reflecting upon the day's events, I learned not to be too fussed when things don't go as planned because our lives are held closely in God's good hands. Indeed, all will be well. As in every of our adventures, we slept like babies with great anticipation on the the exciting ride planned for tomorrow. 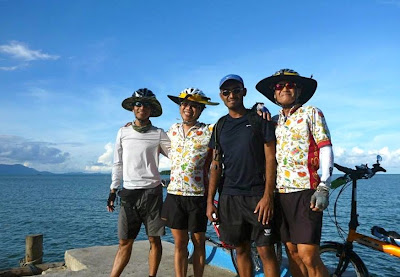 I am leaving you with a gift—peace of mind and heart. And the peace I give is a gift the world cannot give. So don’t be troubled or afraid. John 14:26
Posted by Oldyonfoldy at 6:46 PM

Nice post. I am planning to visit Lingga Island. I have a few questions though, would be great if you have some answers to them!

1) Is there a direct ferry to Lingga from Tanjung Pinang? I see Singkep at the bottom of Lingga, why doesn't the ferry stop at Lingga but instead you have to travel to Lingga via Singkep?

2) Is there good network(for prepaid internet?)

3) Me and my friends do not ride, what will be our options on transportation there?(Singkep and Lingga)

Thank you very much.