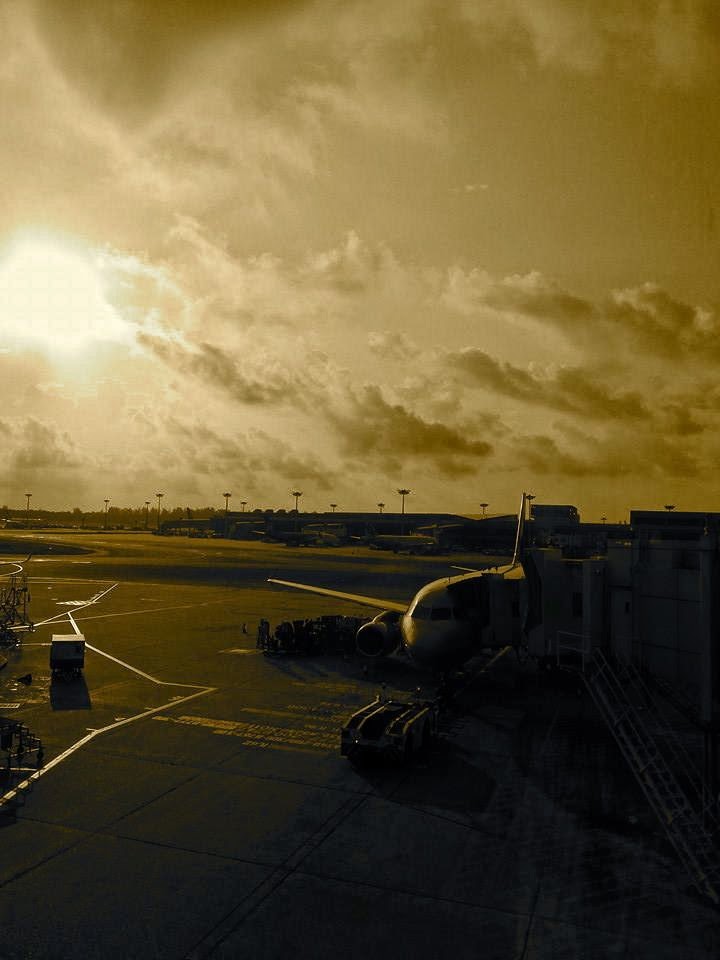 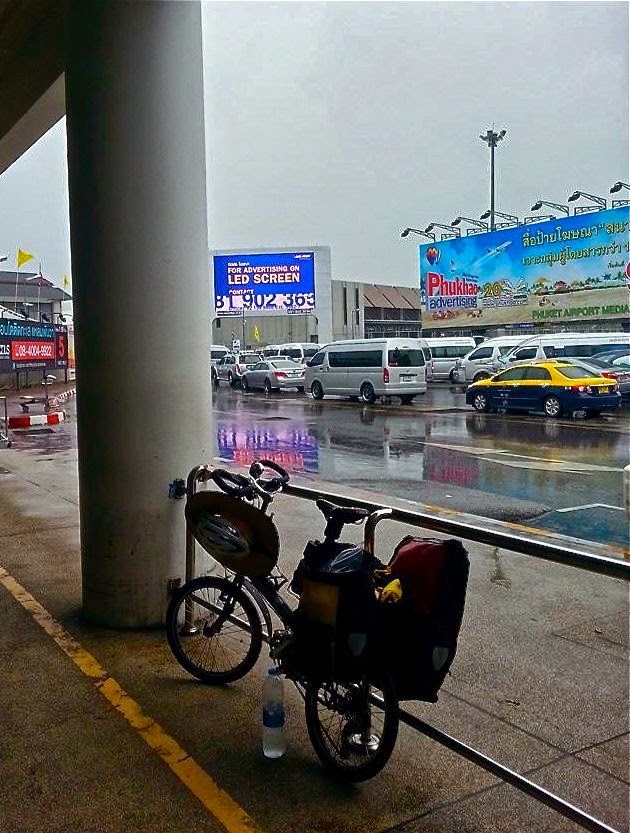 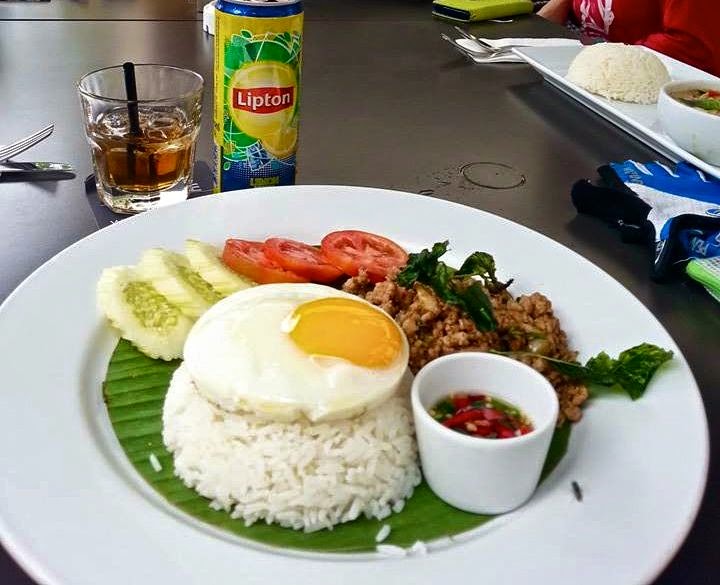 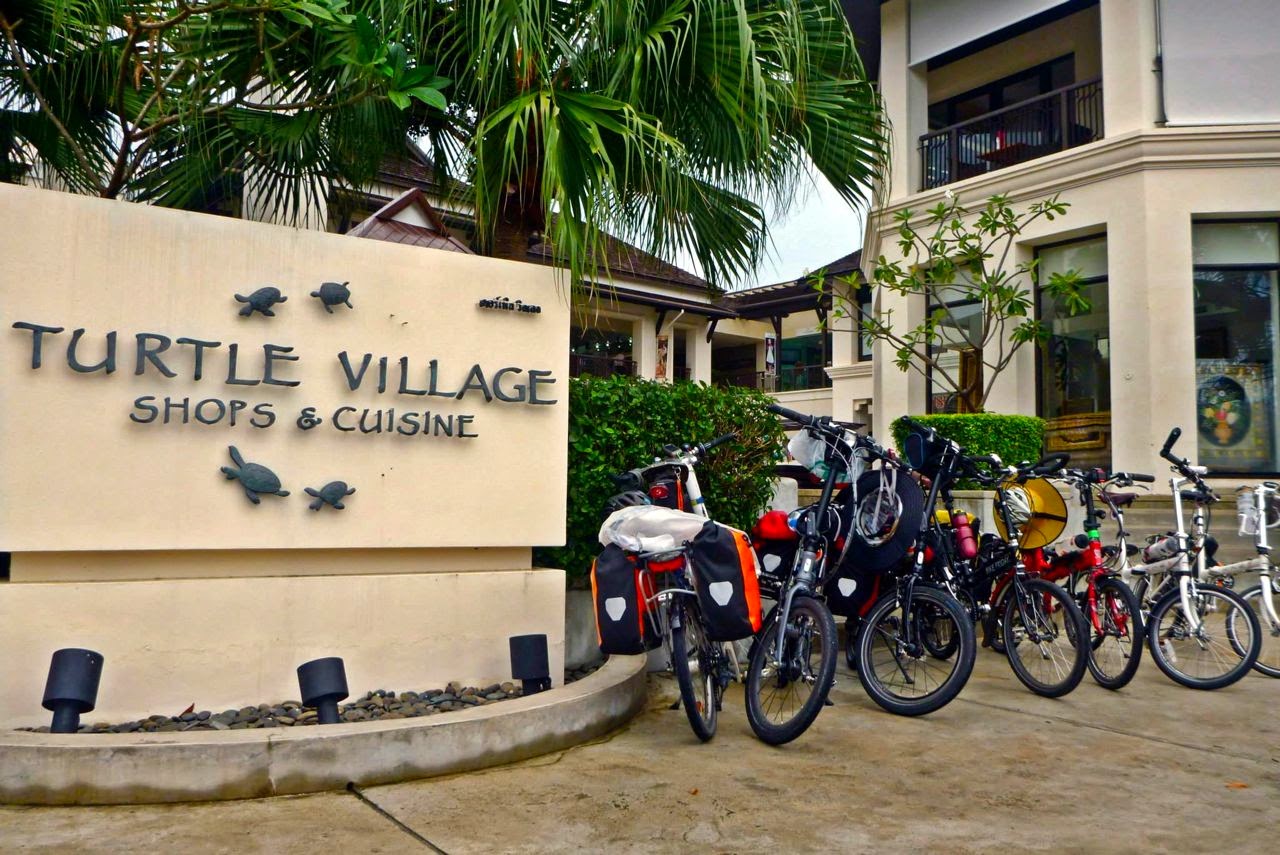 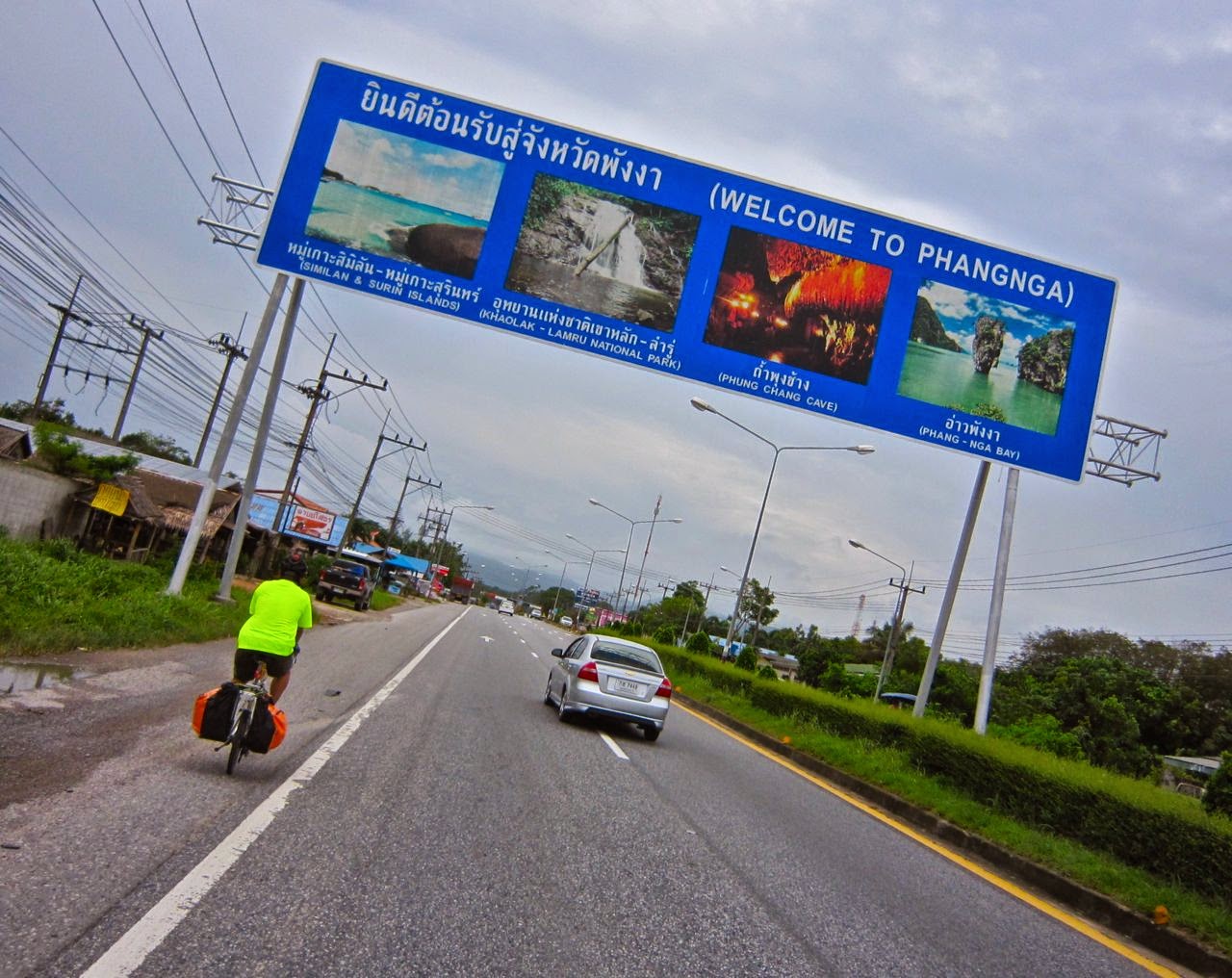 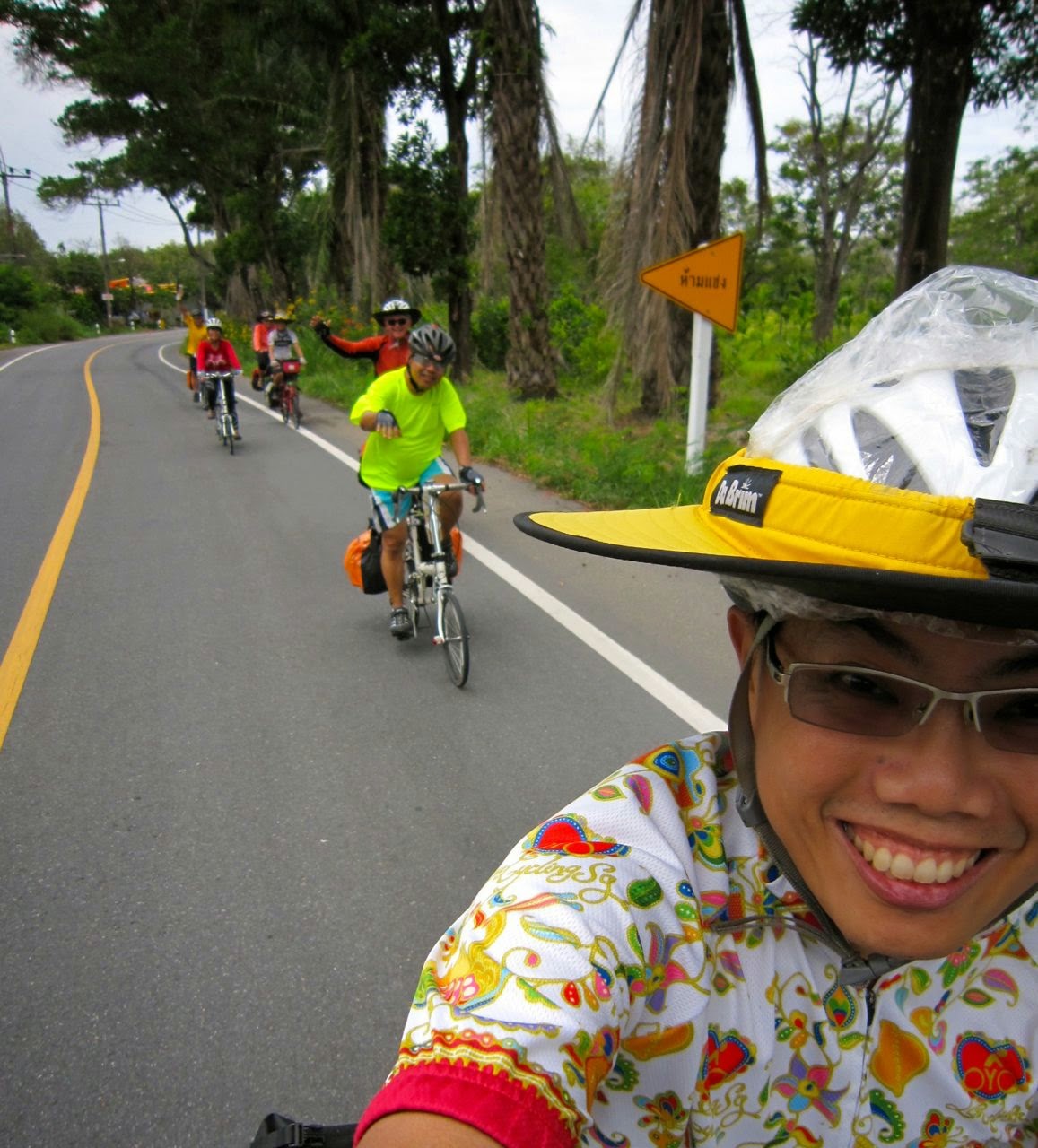 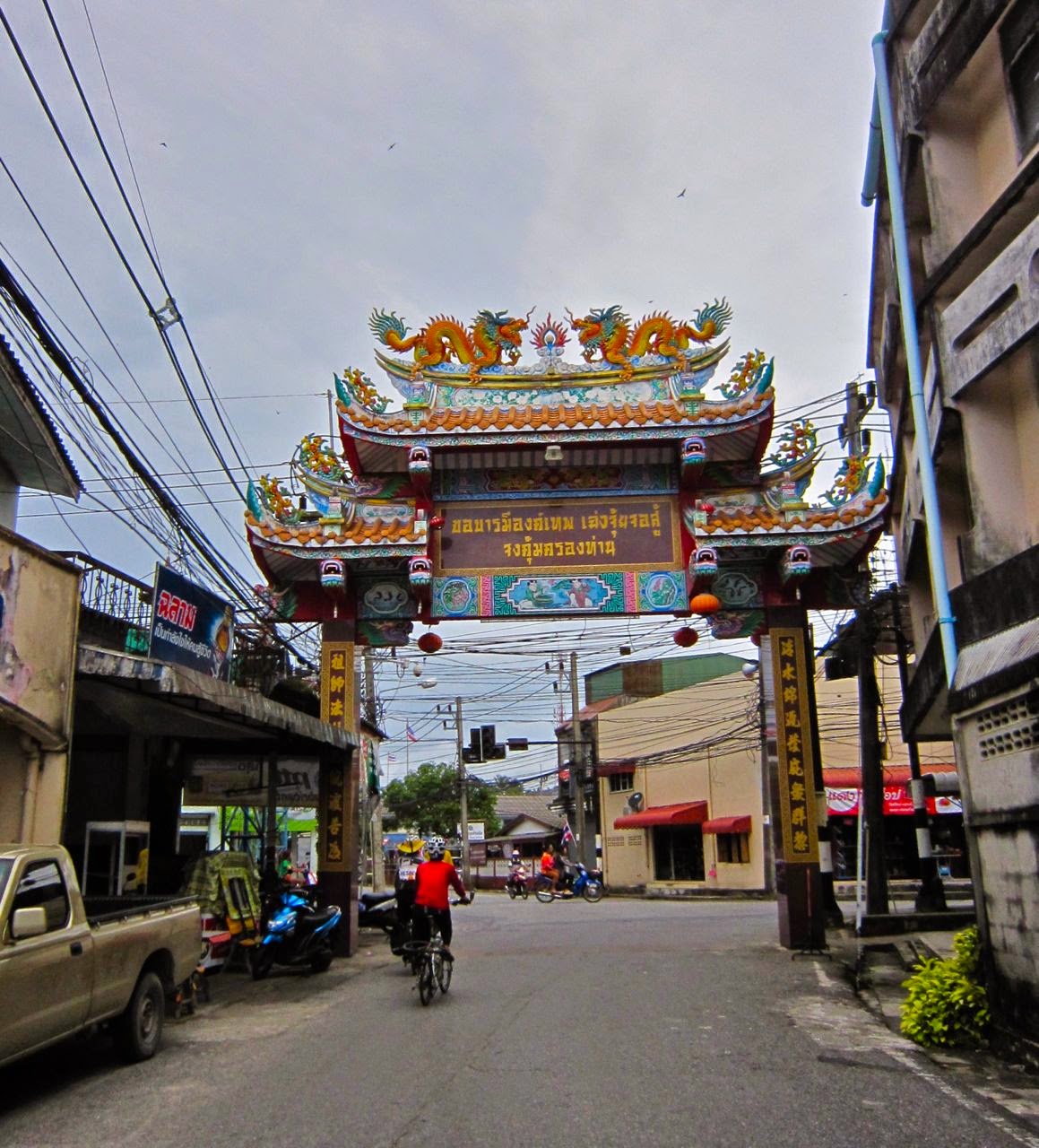 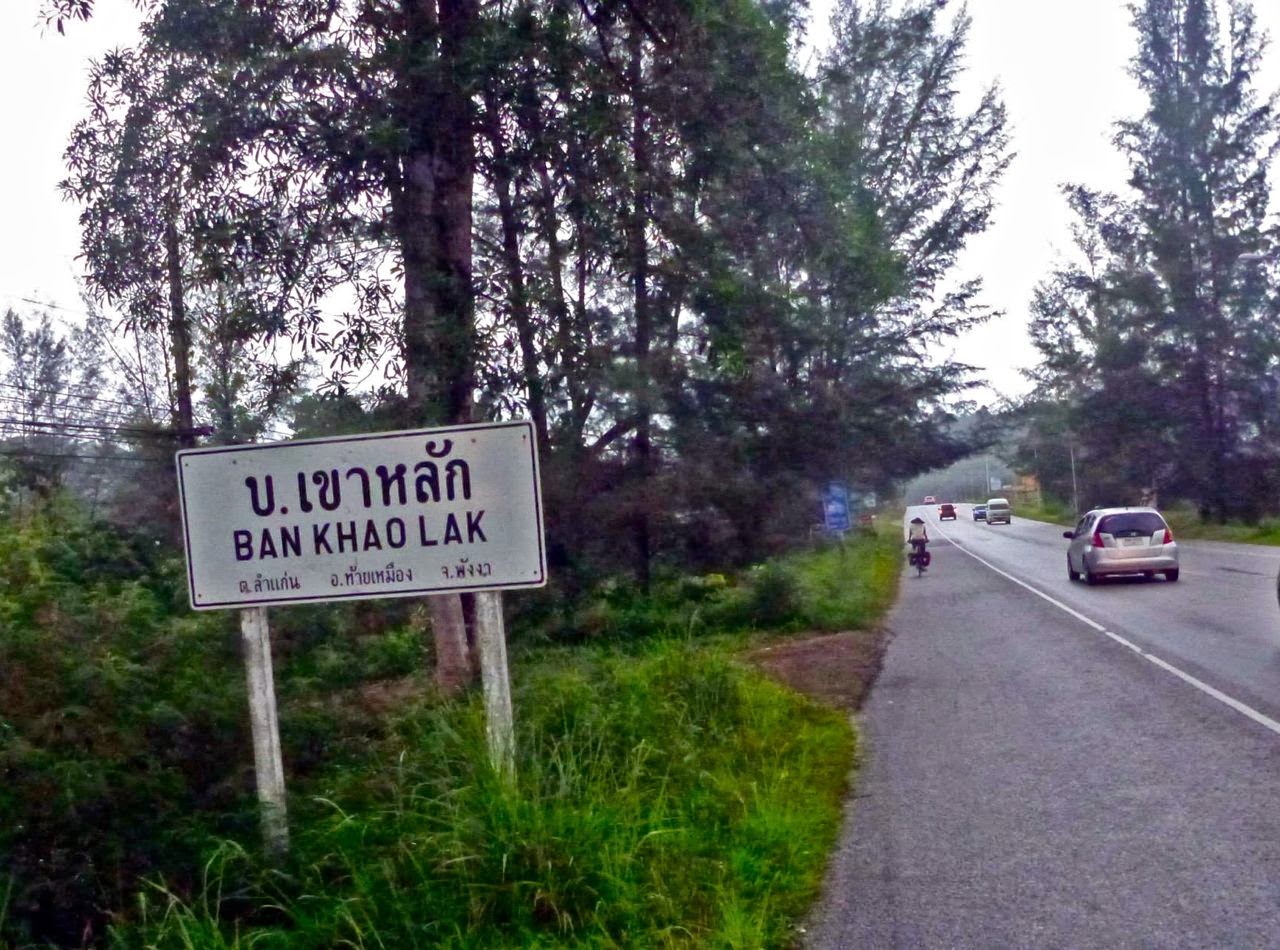 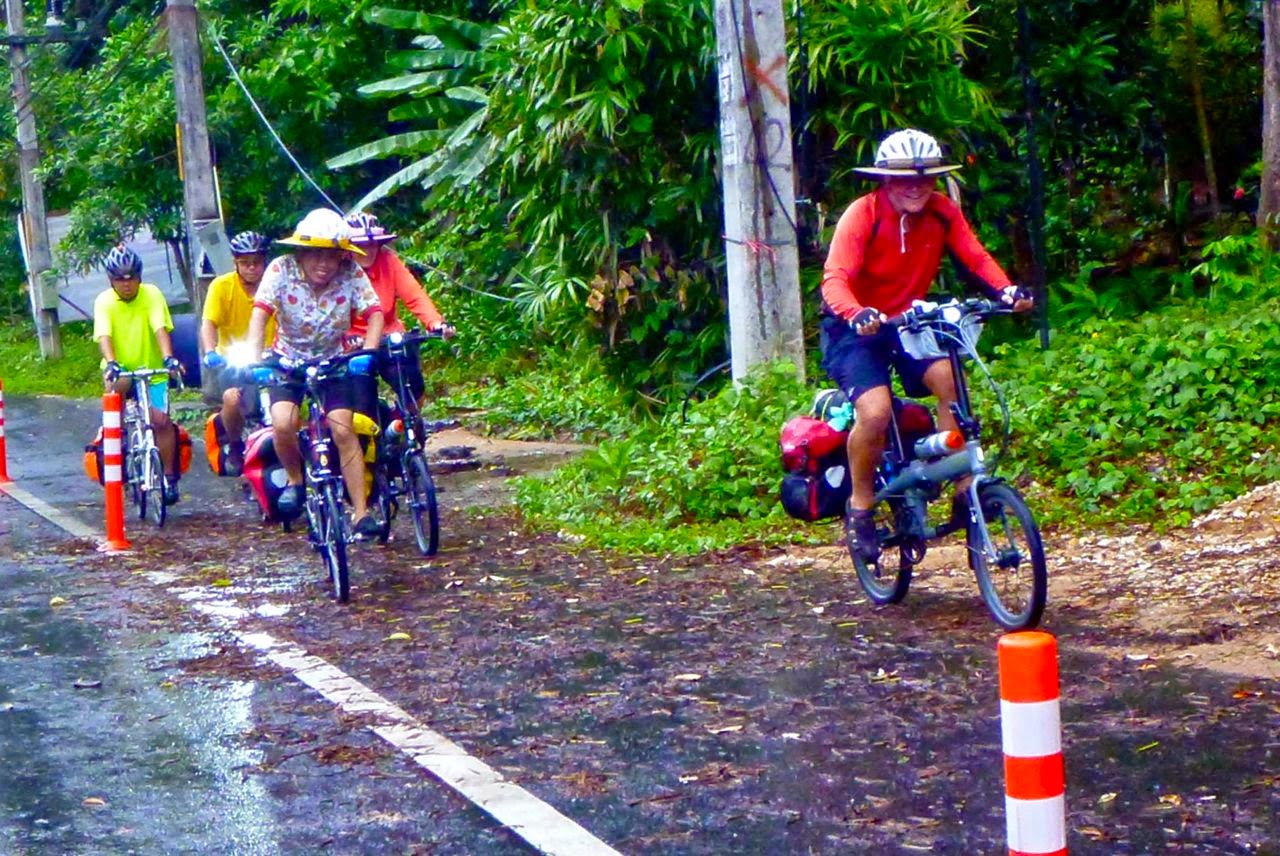 It was exciting to be dropped off at Changi with my Bike Friday snugly boxed up, at 0645. "Yoo hoo-ing" away was KC, way ahead in the Jetstar check-in queue. George and Wendy were nowhere to be seen, but knowing them, they would have checked in much earlier. Our flight to Phuket was just under 2 hrs and we landed at about 9am, still in disbelief that our South Thailand Ride adventure has actually begun!

We took our time to assemble our bikes in the comfort of Phuket Airport and what greeted us were pouring rains. In the world of Feng Shui, water is always a good sign but when we have the Living God ahead of us, we ride confidently under His care, come what may. Ying Chang, Pete and Jan had flown in earlier to enjoy Phuket and were to meet us at Turtle Village, some 15km north late morning. 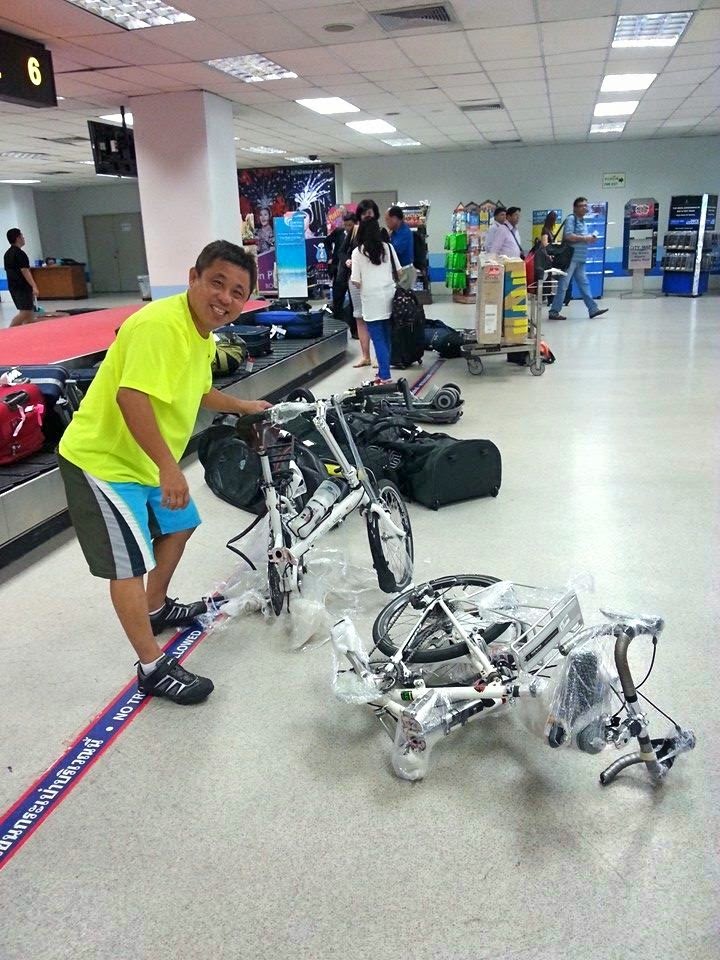 As Aug is the wet season, the rains were what we came for so we set off on our bikes, literally singing in the rain. Sloshing out of the airport, we initially made the mistake of turning right when we should be turning left along 4031. 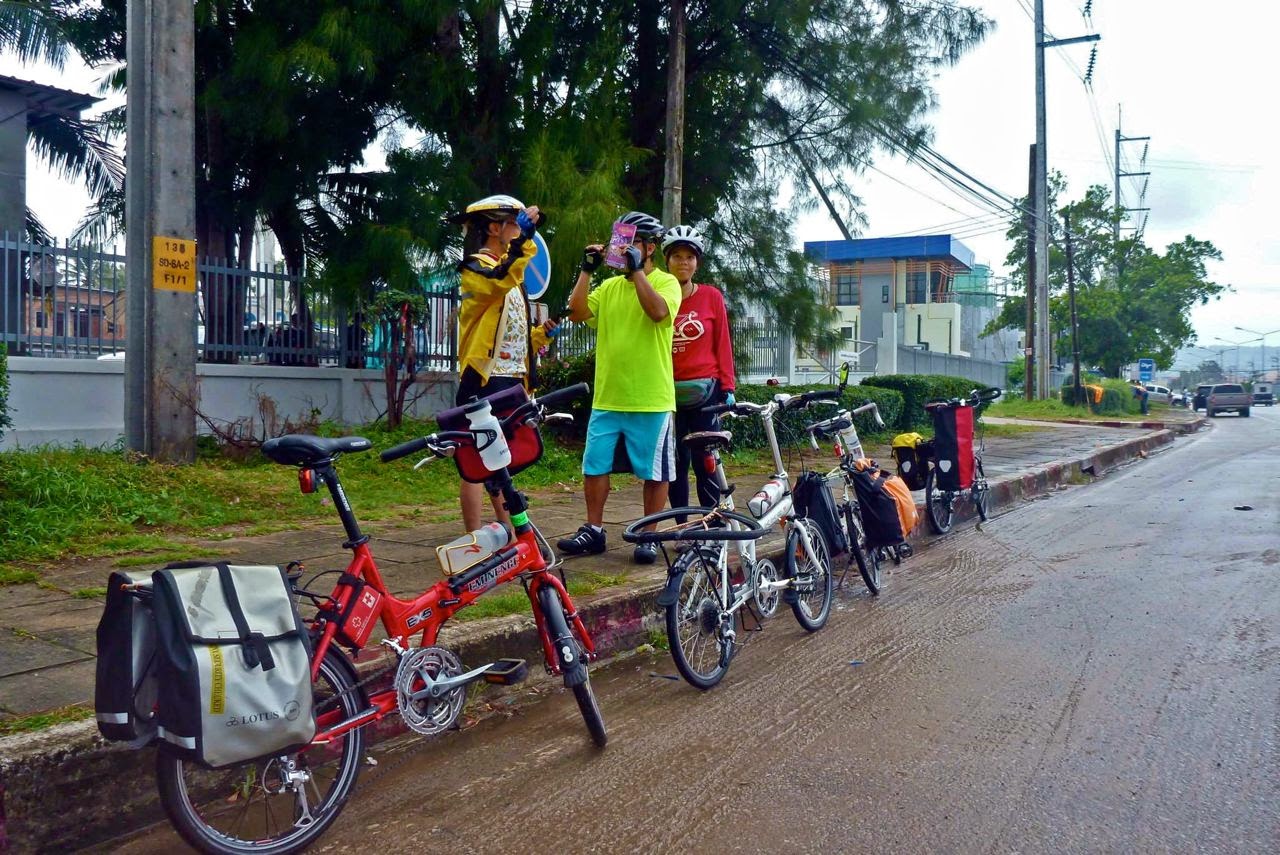 We were soon on our way towards the T-junction of 402 along a rather narrow road where we headed north. Then, it was a quick left along 3033 just 1.5km or so along quieter country roads. The rain seemed to have eased down and we were soon enjoying the fresh forest air. It was special to be riding again with great friends even though I was feeling a bit crooked from stomach troubles and had absolutely zero prior training.

3033 soon joined back to busy Highway 402, but it didn't matter as we were shortly turning into Turtle Village where we were to meet our 3 friends. They were patiently waiting for us at the Coffee Club and we exchanged the warmest of welcomes. 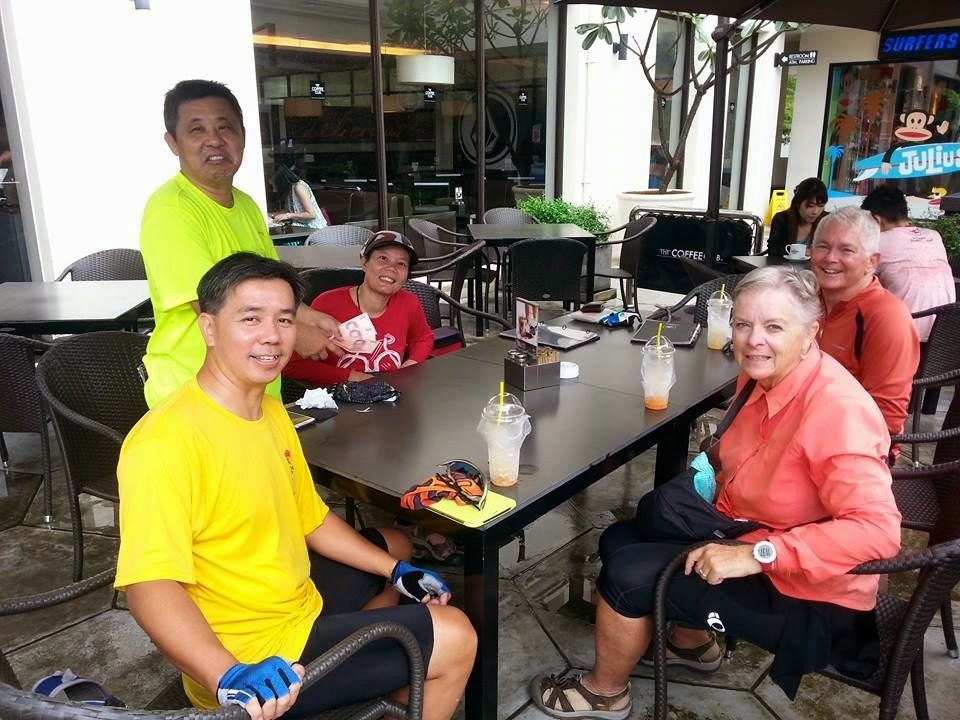 With hot Lattes and freshly cooked food in a beautiful setting, we could not be more delighted. KC and George queued up at the street vendor for Cha Yen, an absolutely lovely Thai milk tea that we soon grew to love. 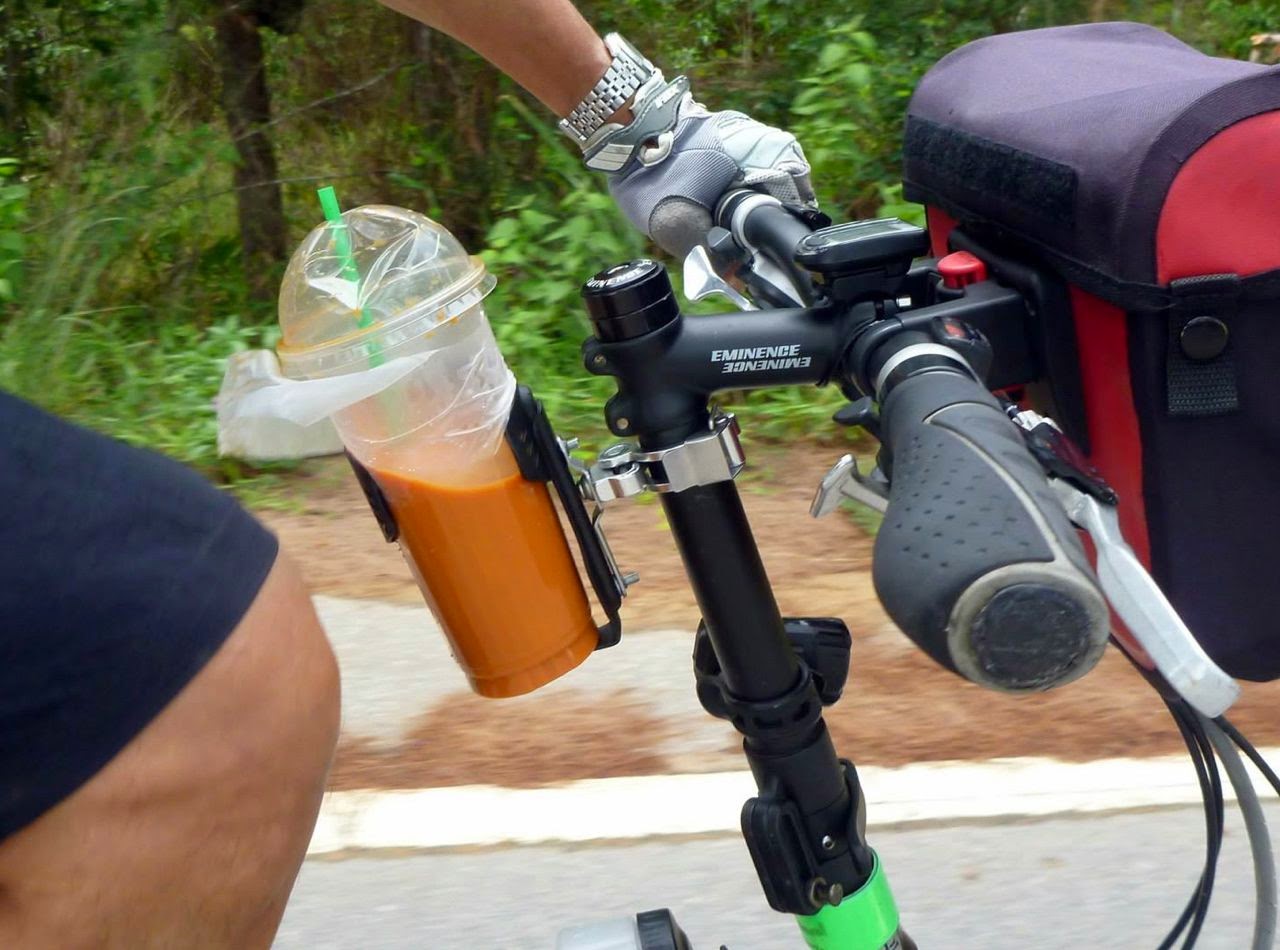 We set off just after 1pm reluctantly, destination Khao Lak some 70km to go. The roads were still pretty wet and some parts were literally flooded. But that just meant more fun for some us! Whoopi woopz... 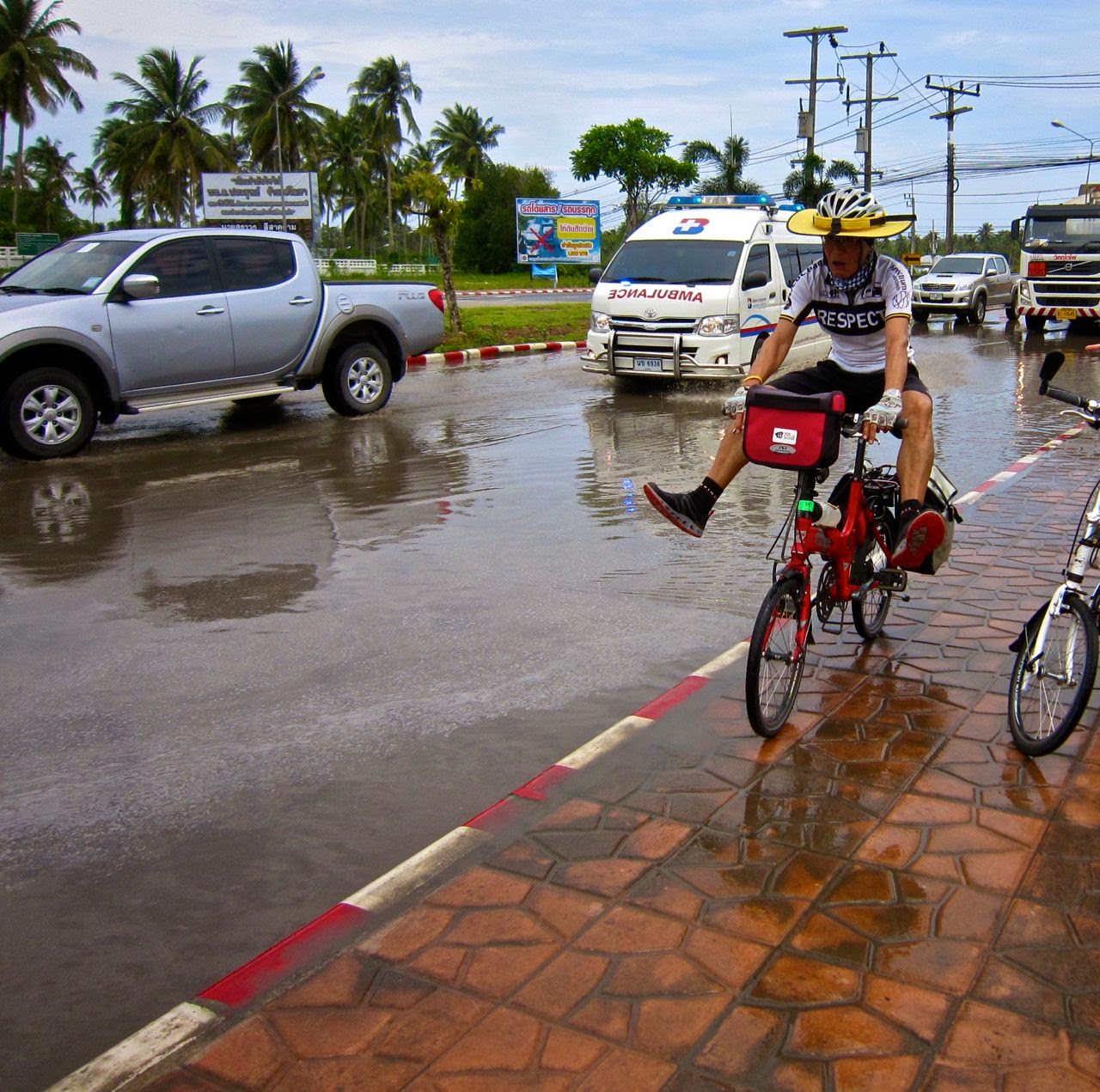 It was very special to cross the Sarasin Bridge, where we said goodbye to Phuket Island and hello to the Thai mainland. George remarked that he has been here once but have never gone further north than this point. Well, we will be going much much further north from here, all the way to Chumporn 500km eventually! 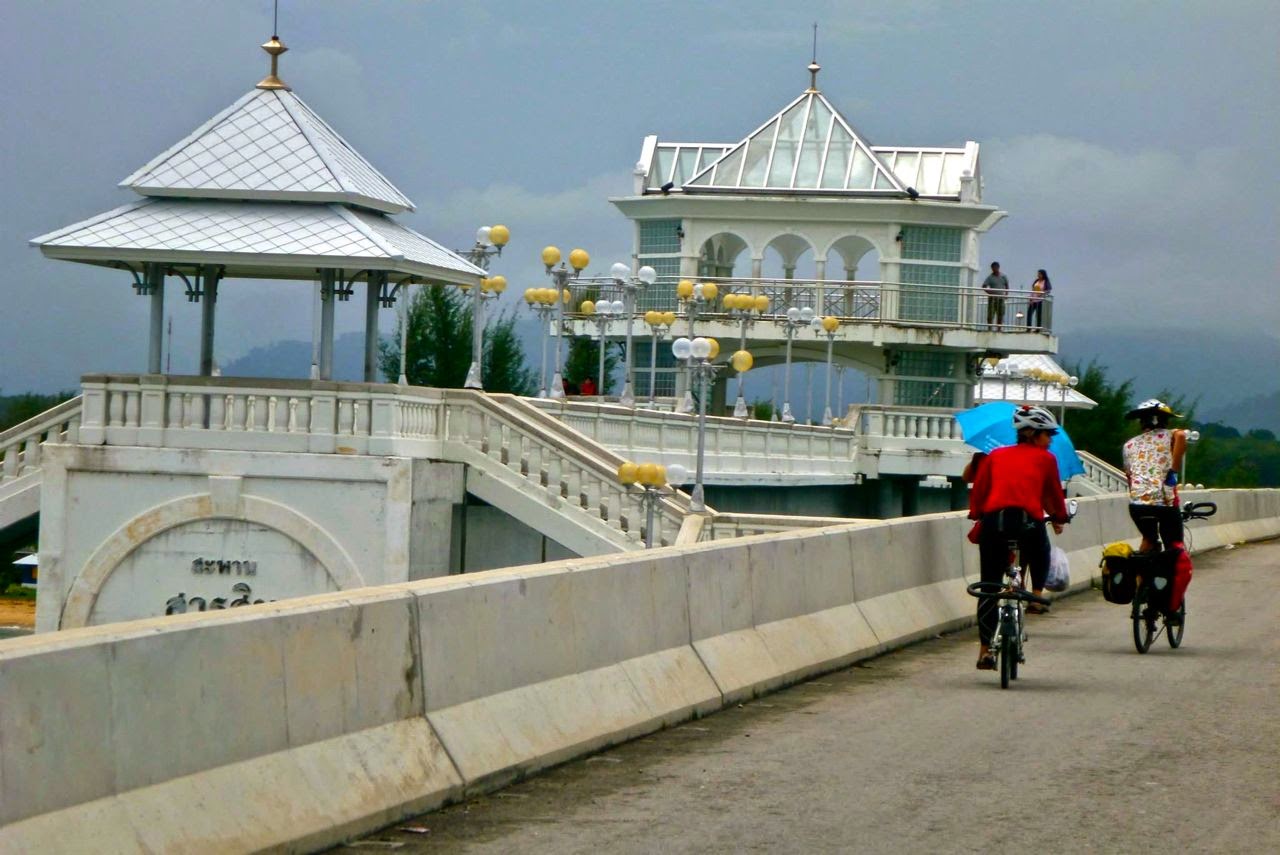 The ride took us along the beautiful coastline, but this being the wet season, the waves and winds were frighteningly strong. No wonder it was the low season as the only safe swimming possible is in a pool! But we were here to cycle and this season meant nice cool rides albeit a bit wet. I honestly prefer this anytime compared to getting burnt under a blazing sun. 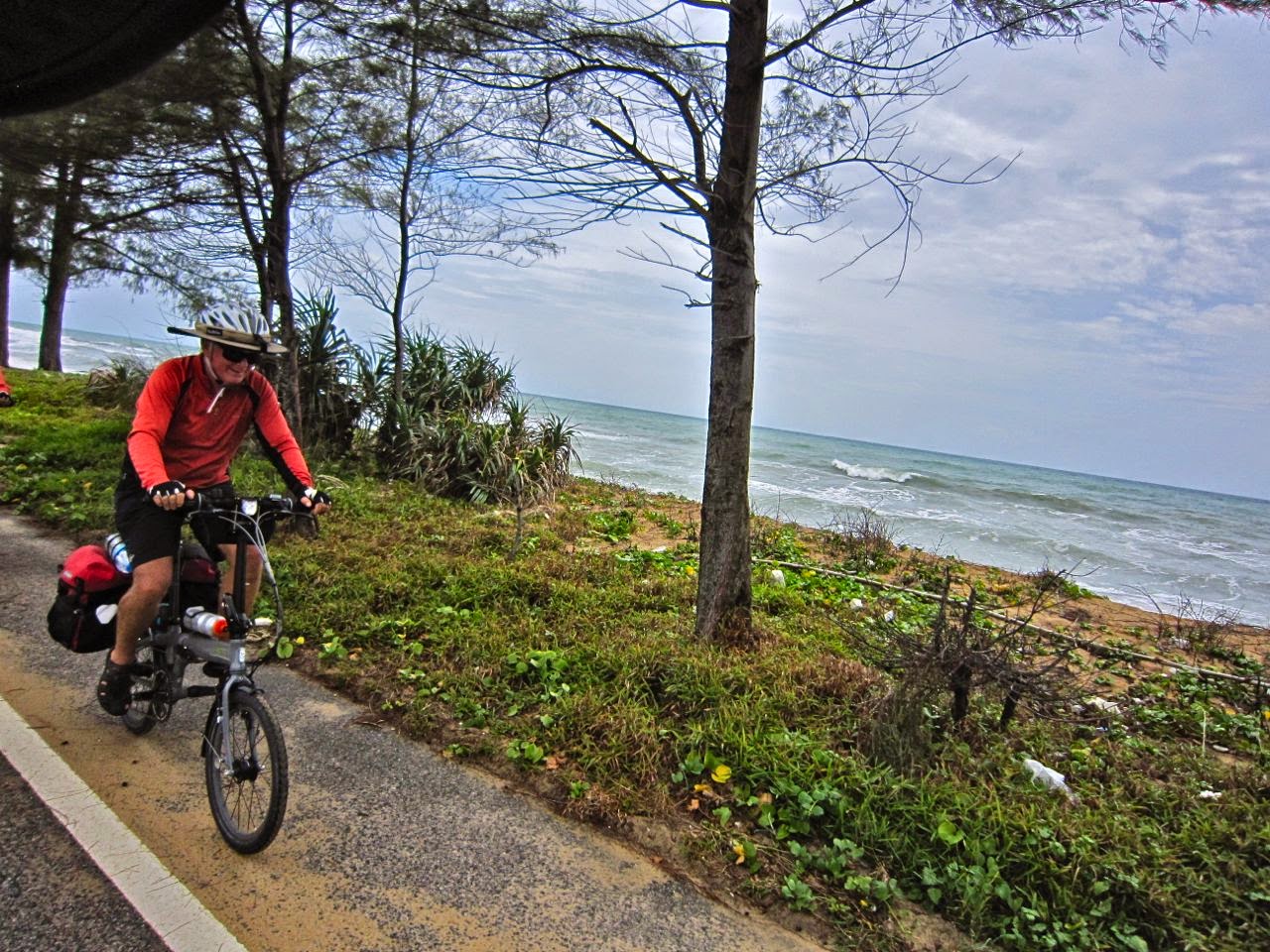 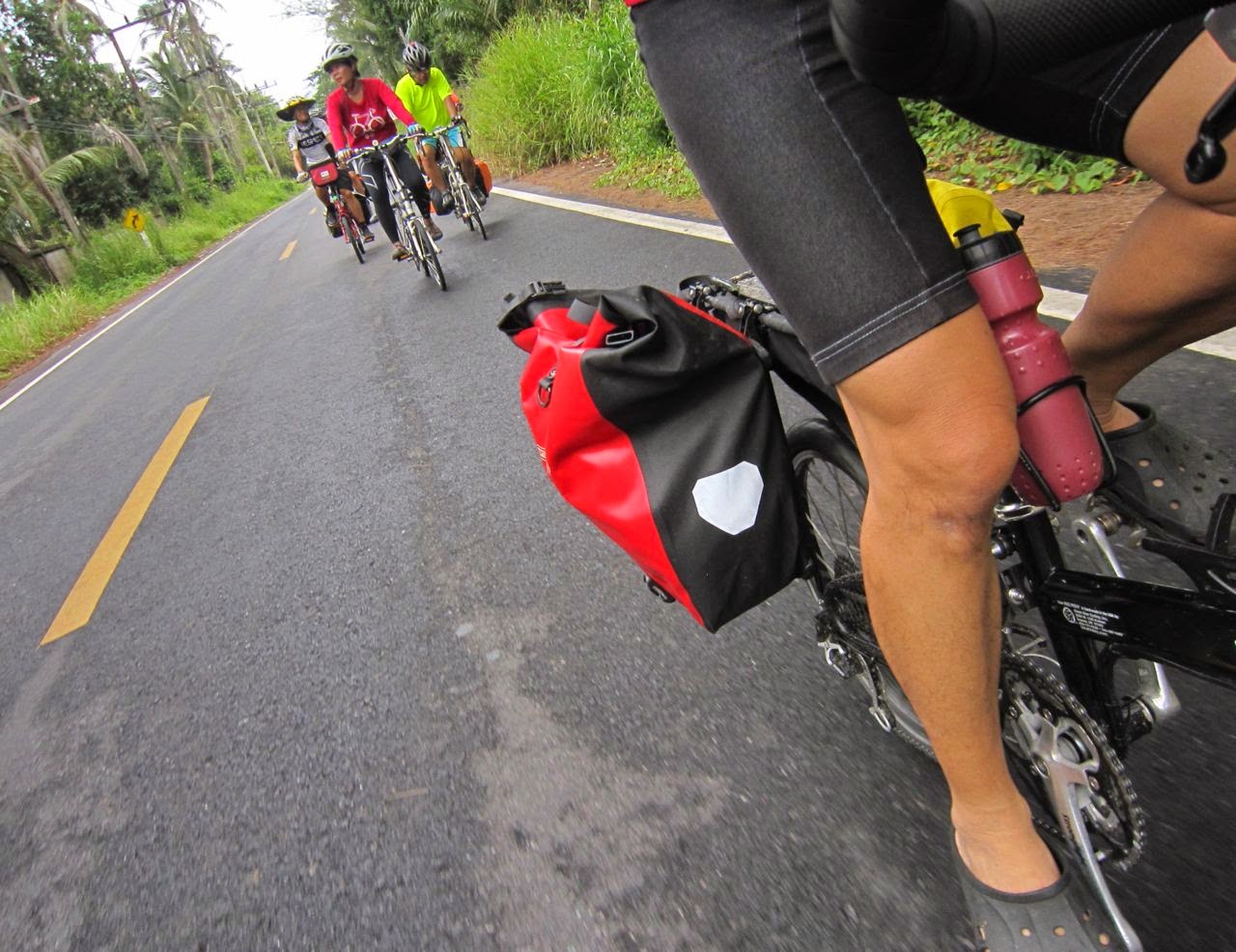 Being the start of a long adventure, we just took it easy and rode leisurely at 20km/h or so, soaking in the sights and enjoying a good chat with one another. We passed by some really seriously luxurious holiday homes and exclusive resorts out in the boondocks, and wondered if they are Tsunami proof. In 2004, a huge Tsunami struck this area and Khao Lak was very badly hit. More than 3000 lost their lives, and many more were injured, not counting huge losses in property.

We took breaks every 20km or so or every hour, and there were no shortage of local drink cafes even along this quiet stretch of 3006. At the major Chinese town of Thai Muang some 50km, we stopped to have a good rest at a noodle shop. Though we drank a lot, nobody seemed hungry somehow much to the disappointment of the noodle seller. KC was still full of beans and jumping up and down literally in front of the local police station! 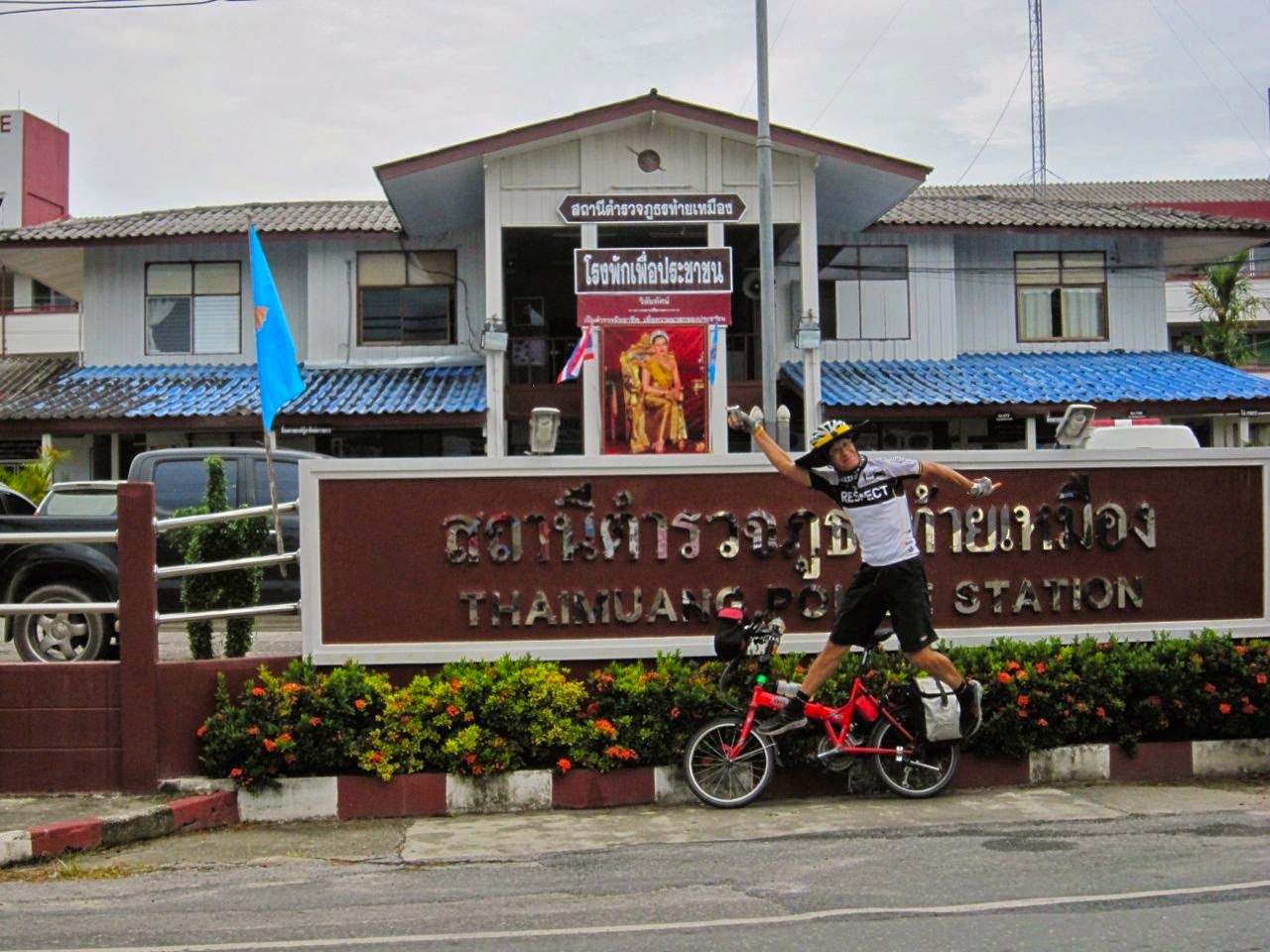 Sadly, I was not feeling so good as my stomach pains were getting stronger. But the show must go on and Khao Lak was a mere 25km away. It didn't help that the weather was taking a turn for the worse too and I felt like we were in the movie Storm Chasers, only instead of riding towards them, we were trying to get away from them.

We stopped at a small roadside cafe as I was feeling very famished and exhausted. An order of freshly cooked Khao Pad (fried rice) served with piping hot radish soup strengthened me gradually. In addition, popping some painkillers thanks to the kindness of our resident Dr, Papa Mike did wonders for me too. With all the rain, there seemed to be another problem I faced. An abundance of mosquitoes and for some strange reason, they preferred my Type A blood over others. So I ended being the de facto sacrificial lamb to these blood suckers. I supposed someone has to "volunteer" for this! I really appreciated the kindness of Wendy who offered me her special repellent. Looking after each other makes all the difference when we tour and I cannot emphasize this more.

We knew Khao Lak was near as we began to pass Tsunami memorials. The local fire station had a big stature of a heroic fireman rescuing a rather well endowed lady, and that warranted a closer inspection for some of us. I always have the highest respect for these fine professionals who risk their lives everyday for others. 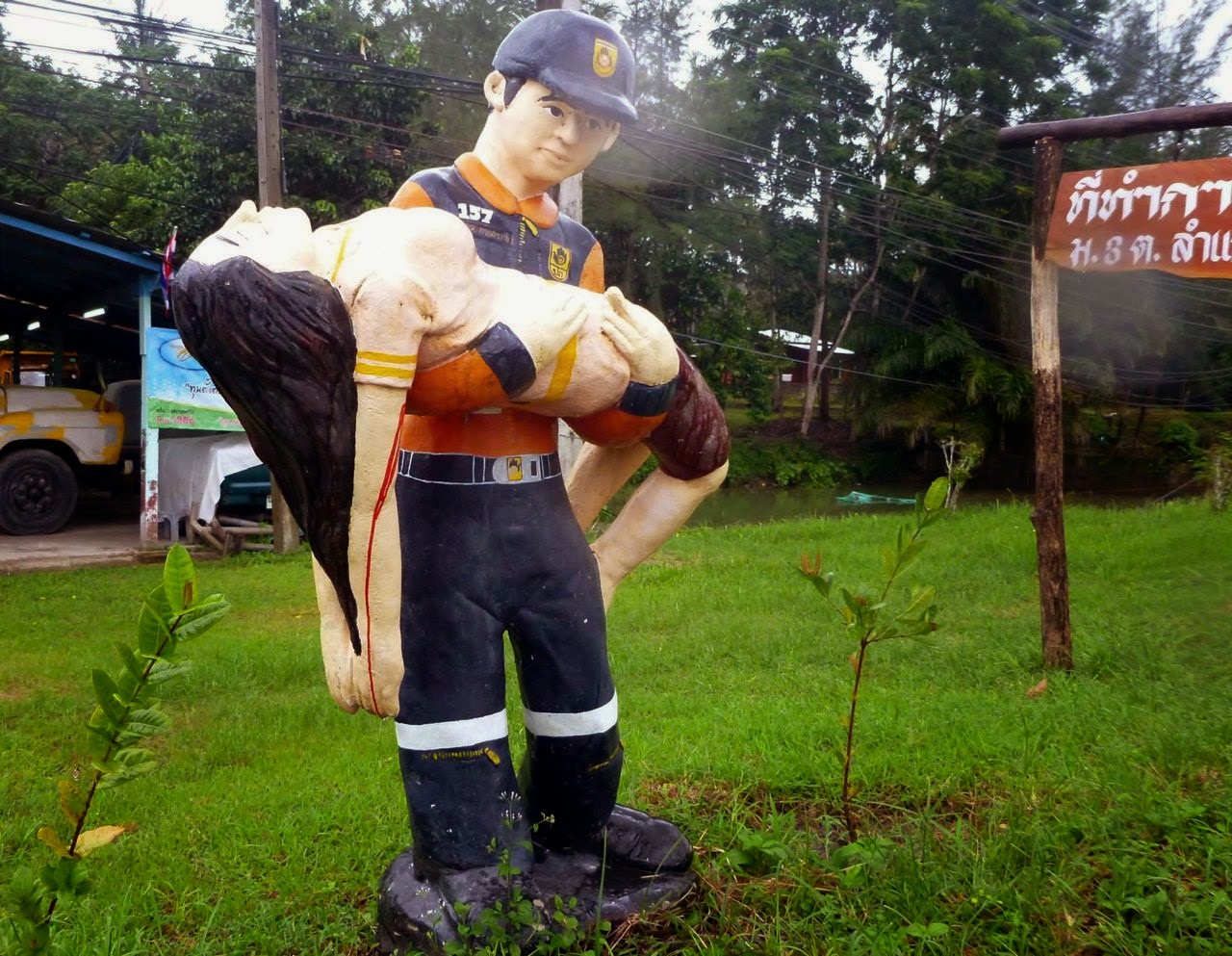 We had to climb some steep hills before arriving in Khao Lak and that was hard work! When we finally arrived in town, we were greeted with bright lights, restaurants and shops all lined up on both sides of the wide road, ready to entice the Farang tourists. There is even a McDonalds, which in many countries, determines a certain level of civility. I was very glad to have reached 80km in one piece given my condition but the bad news was that our hotel, the Aspara was still 13km away from town! 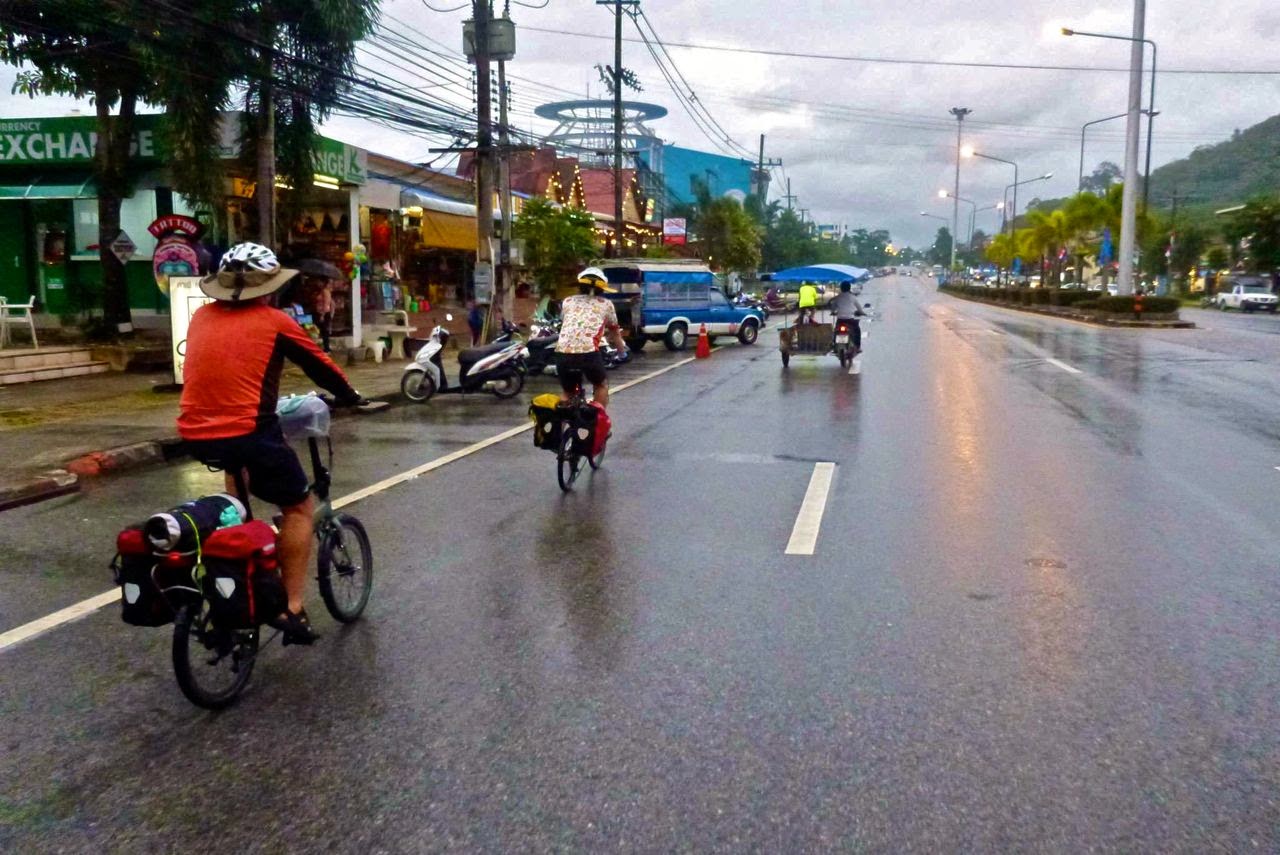 By the time we got to our hotel, the sun was just about to set. The consolation was that the Aspara Spa Hotel was indeed a very impressive 4 star resort with its own private beach We wasted no time to check into our lovely rooms, and hit the shower in the very spacious bathroom. It was commendable of the reception to allow our bikes to be kept safely in the hotel office.

Dinner that night was taken at the beach front restaurant. Though it was to be a candle light dinner, the strong winds blew out any hope for a romantic evening but we didn't mind one bit as our romance of traveling on our foldies with the magnificent 7, exploring the Isthmus of Kra, had only just begun.


A most beautiful song for great beginnings, courtesy of the late Karen Carpenter.

Posted by Oldyonfoldy at 5:43 AM