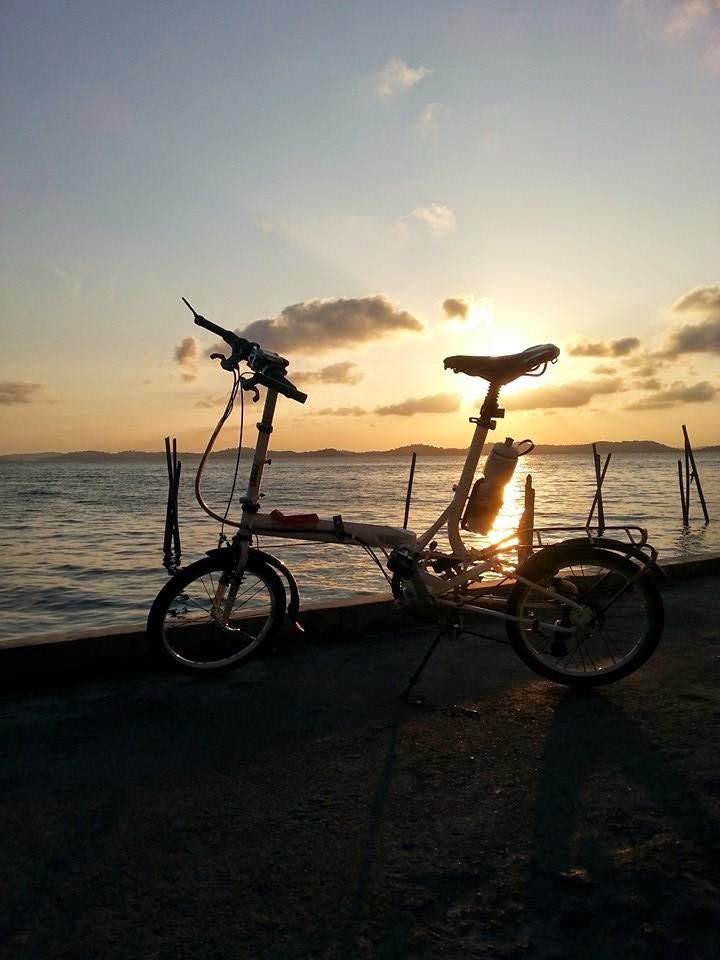 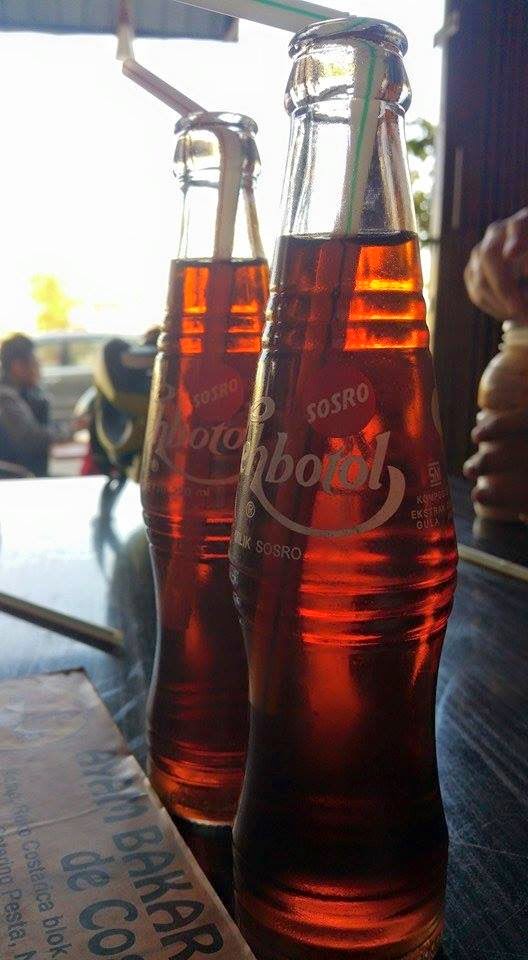 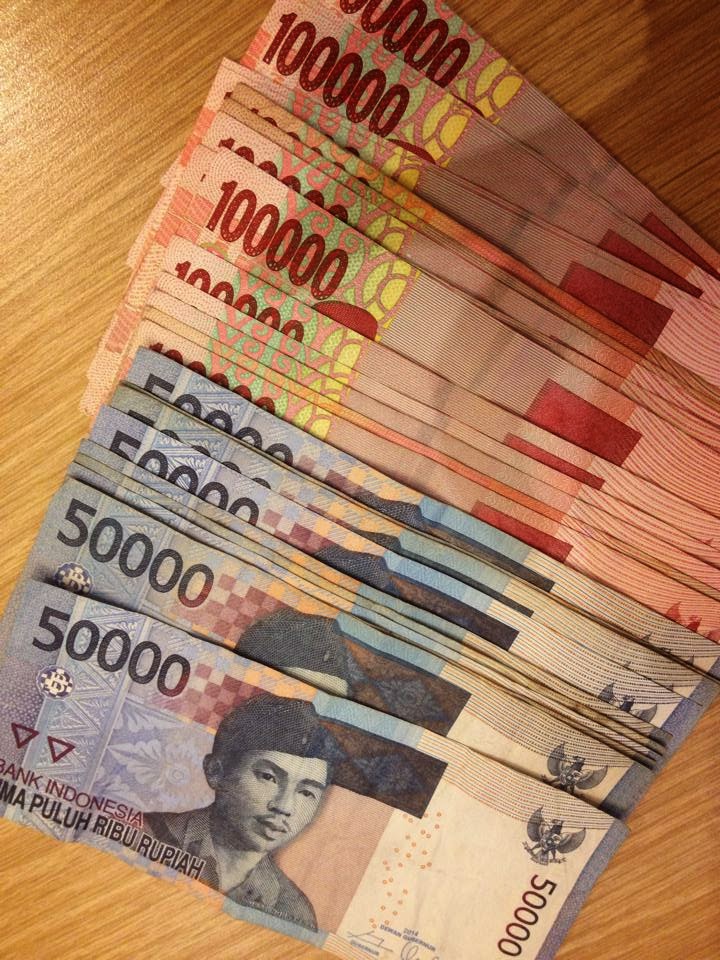 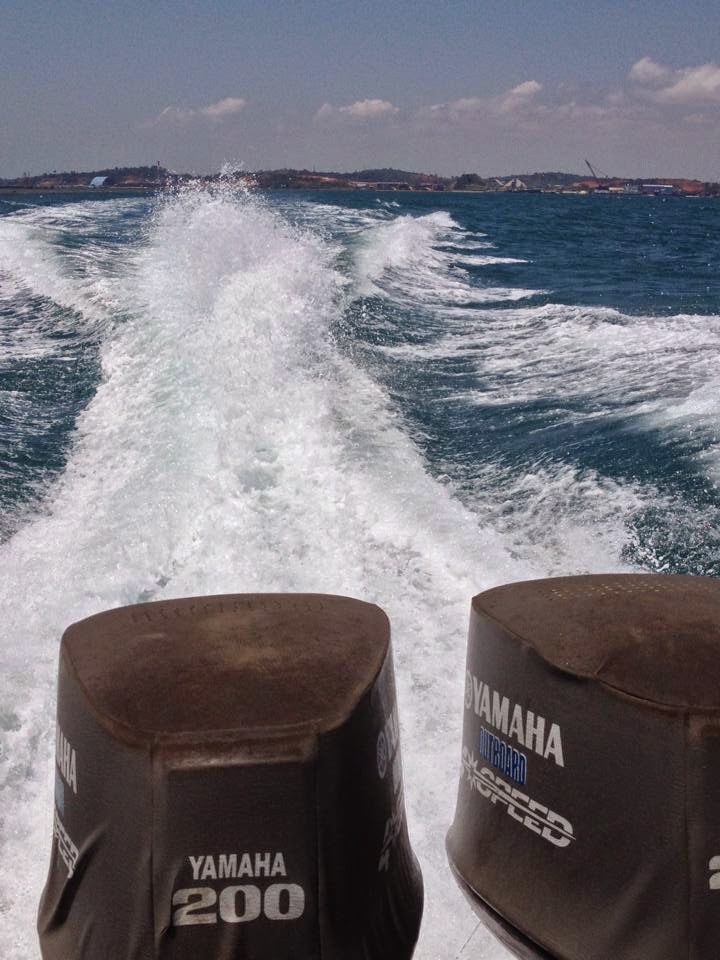 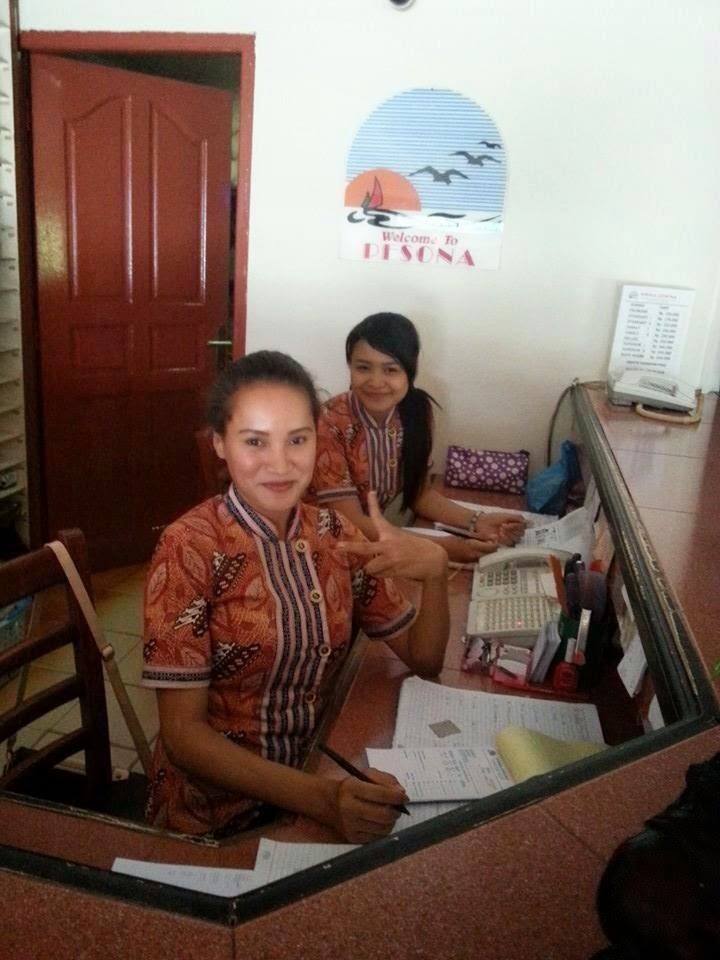 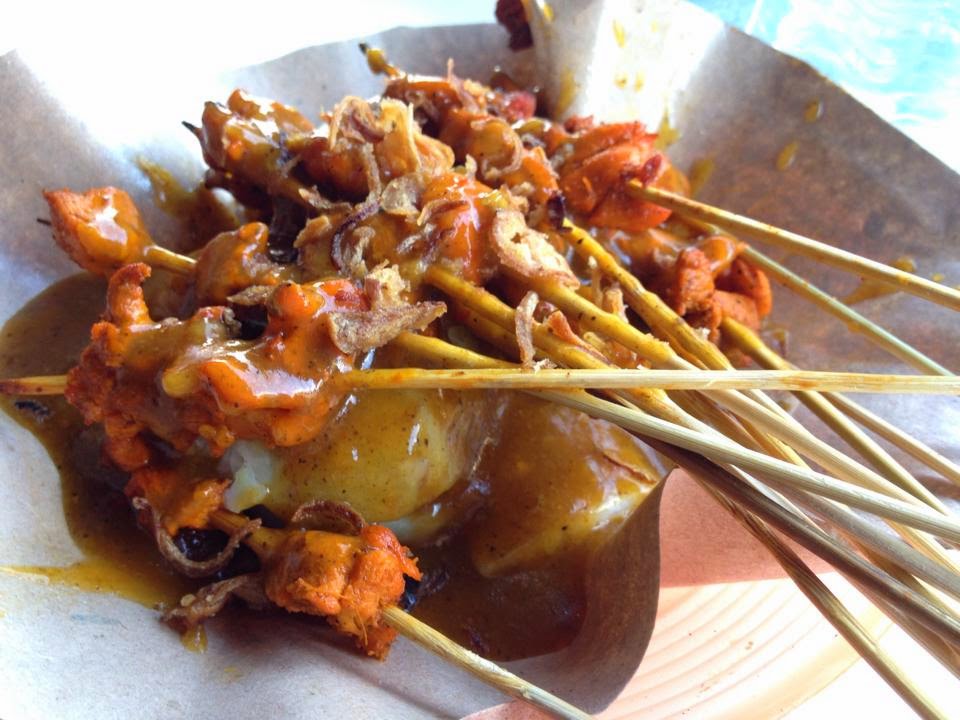 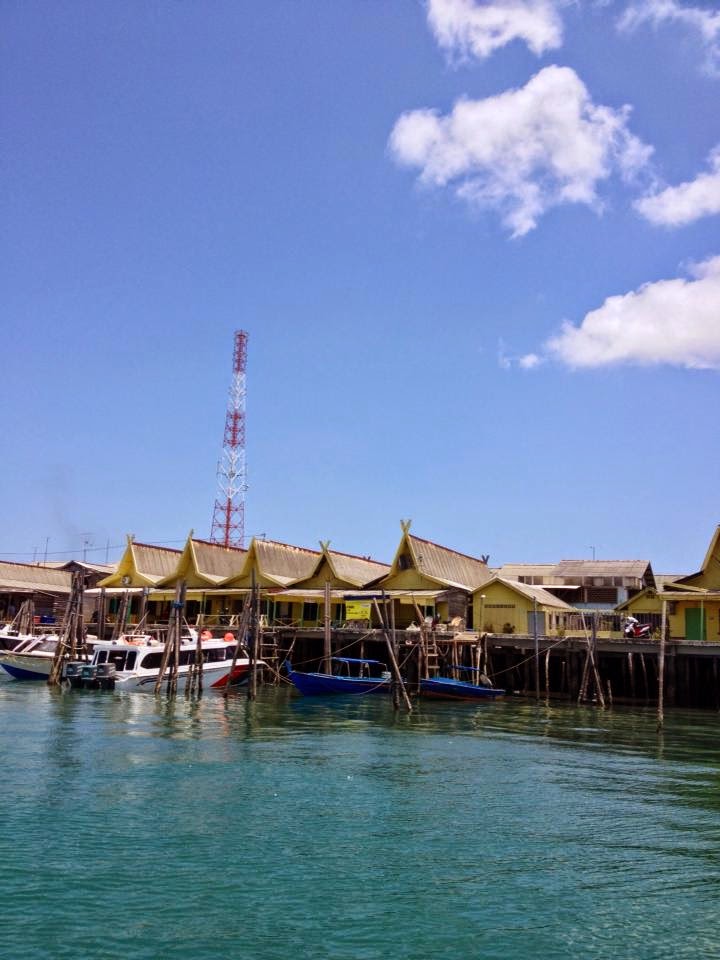 I have always enjoyed riding the Riau Islands so when a request for me to organise one came up, it was not too difficult to say yes. Ying Chang had 2 cycling friends who wanted to try touring and so it was a delight to put one together. We have done a similar trip before some years back.

Our fun team of Ying Chang, VT, Claudine, Berenda and Judith had an amazing time riding and eating, or should I say more precisely, eating and riding our way through Batam and Bintan. For the rest of the story, we are privileged to have a guest contributor in Lovethefold for the first time!

I enjoyed reading it so much and I know you will to. Thank you Makan Mata for your kind permission to share this on LTF!

Written with my basic, broken, "convent school" English, I humbly share my reflections on Day 1 ride. Rather uneventful. Pardon my England though

Day 1 - The start of an Adventure!
The day started early for VT and Claudine. 5 am they were up and about. Taxi arrived at 6 am. Traffic into Singapore was good. They arrived at Harbour Front around 7.15 am, geared up and went in search for breakfast. Breakfast was an egg and ham wrap, downed with a cuppa of Cappuccino. Meanwhile, YC and Alvin were enjoying a McDonald breakfast. Berenda and Judith pedaled power to Harbour Front from their homes. Everyone arrived almost at the same time at the ticket centre at Harbour Front. 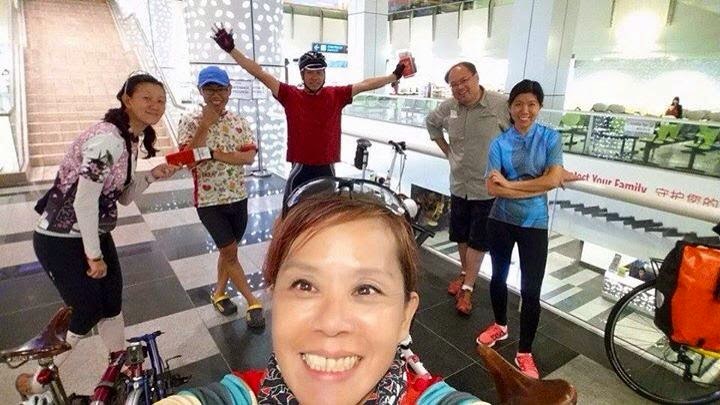 Ferry tickets to Batam were purchased. Only SGD25 one way per pax for a journey of 50 minutes. The "not do good deal" is the porter charge of SGD10 to get our bikes up to the ferry. We set sail at 8.40 am. Judith's and Berenda's Bromptons were compact enough to be placed inside the passenger's area. Alvin's Tikit, YC's Dahon, Claudine's Tern and VT's La Pierre hybrid went to the open deck at the stern. Size does matter! Claudine and VT chose to sit at the open deck with the bikes as she tends to get sea sick easily.
The other team members prefered the plusher seats at the air conditioned passenger's area instead.
At Batam, VT and Claudine hurriedly disembarked. They thought they were one the last few passengers. However at immigration, there were no signs of the rest of the team. They then proceeded to the arrival hall to collect their bikes hoping to see them.

Everyone else's bikes were at the baggage area. But they were not in sight! After much waiting, they finally spotted the other team members clearing immigration. It was revealed that they were seated at the hull of the ferry, waited for everyone to disembark, then, carried the bikes off the ferry. So, the SGD10 porter charge on the  bikes was for one way only!!! Thank you, team!

Potty break for the boys and girls at the ferry terminal. When Claudine exited her stall, the whole lock fell off and off she ran!

Suit up and off we went!

Just 5 minutes later, our first Brekkie at Ayam Bakar Presto. Alvin introduced the group to Teh Botol, which is actually bottled iced tea. Berenda ordered 5 pisang goreng while YC wanted a toast. The toast came in some chocolate spread and desiccated coconut.The pisang goreng however, needed patience. When it was finally served, it was not an order of 5 banana fritters but 5 plates of them. The bananas were drizzled with chocolate syrup and sprinkled with grated cheese. Yummy!!! Some young Indonesian men having breakfast at the same shop had a pleasant surprise when Alvin handed them 2 plates of pisang goreng, compliments from the team! 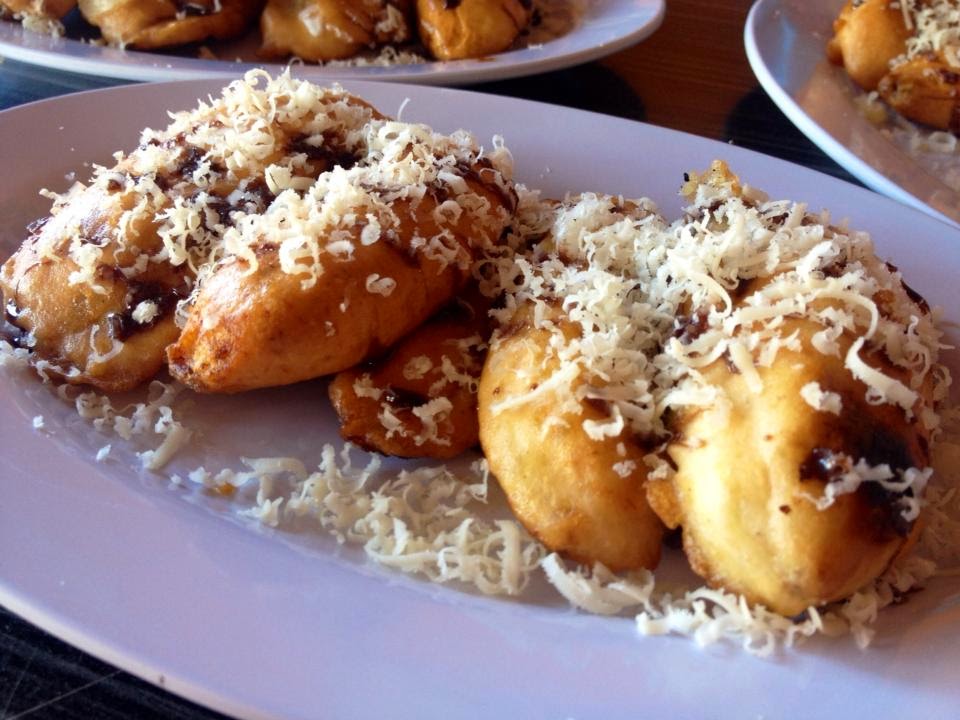 We began our more serious riding in Batam. Hot sun, hills but 30 mins later, another stop! This time, at a Nasi Padang shop. Claudine however was feeling breathless, then paled, finally threw up outside. Out came banana cheese. I guess everyone lost their appetite after that. The poor proprietor only managed to profit from drinks that day.

The ride continued in the hot sun. More hills. Spotted!!! Children on their home run, after school! Then, the air started to feel cooler. There!!! The ocean!!! And within minutes, we wheeled into Panggor Ferry Terminal. IDR2,000 per person for a ferry ride to Tanjung Uban. 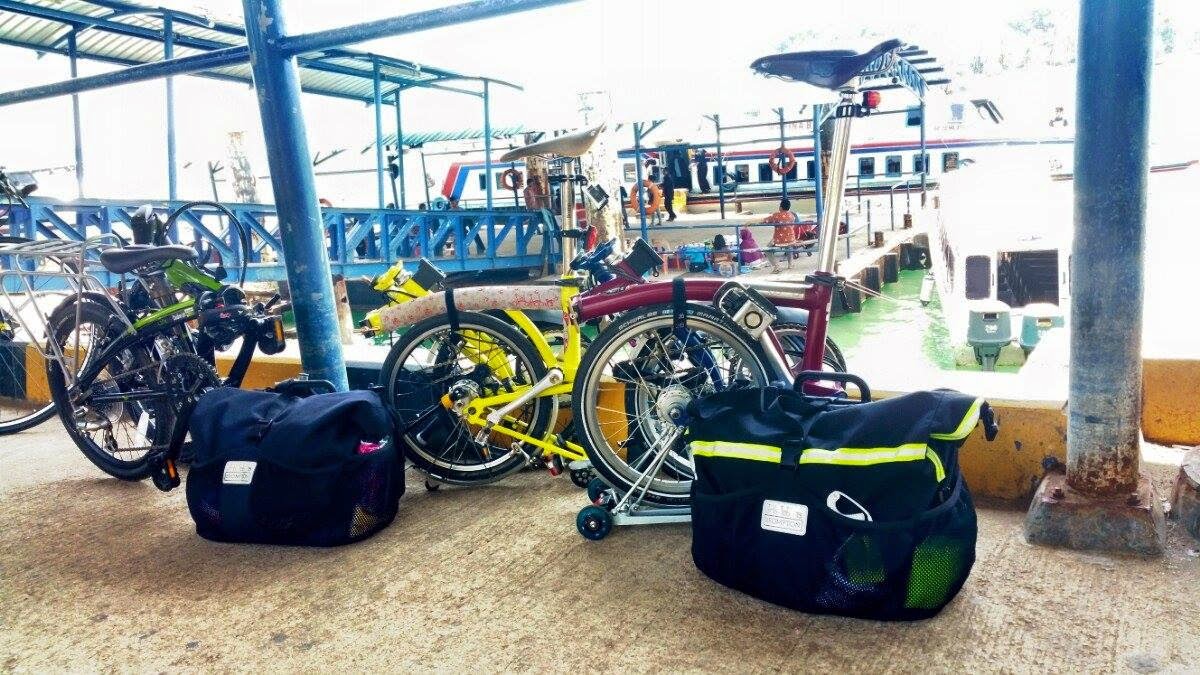 Getting onto the ferry was a balancing act. No gang plank. You hop onto one boat, then you hop onto your designated boat, hoping not to fall into the sea! VT's hybrid bike was too big to go into the ferry. So, it went up the roof and had to be held down with ropes. Again, size does matter! 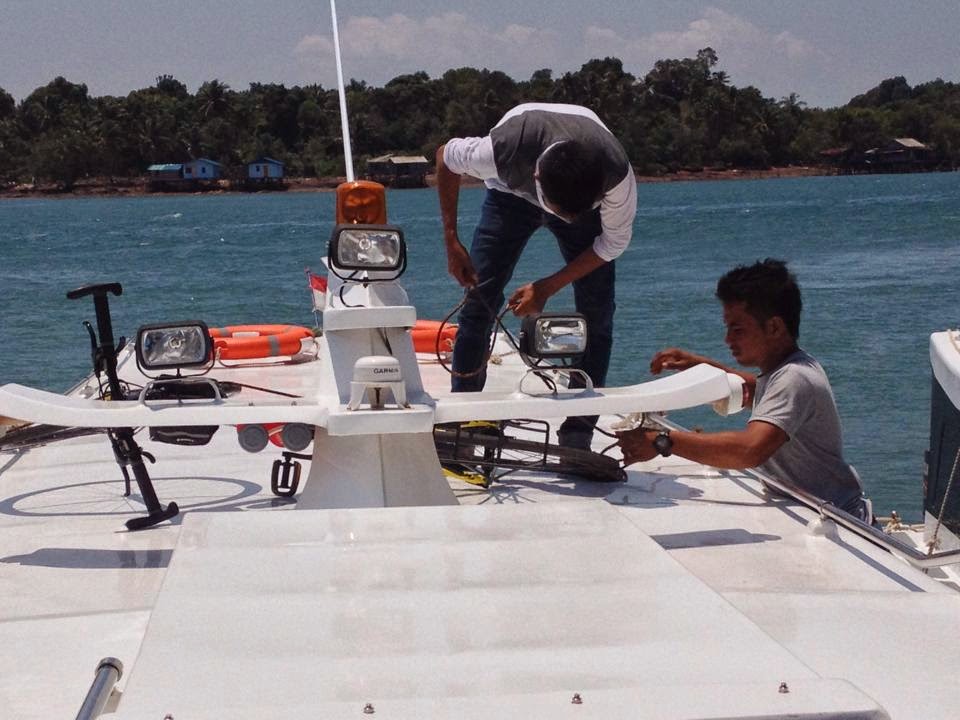 Within 20 minutes, we arrived at Tanjung Uban, a small town by the sea. Again, the men played "passing parcel" to get the bikes off the boat. Thank you, brawns!

We then proceeded to check out Panjang Jiwo Spa. 1 hour massage for IDR90,000. Having made bookings for massages, we then checked into our rooms at Hotel Pesona and agreed to regroup for tea. Alvin and YC went for massage, followed by Berenda and Judith. VT and Claudine were more interested in food. They came back with watermelon and Bakwan (vege fritters). 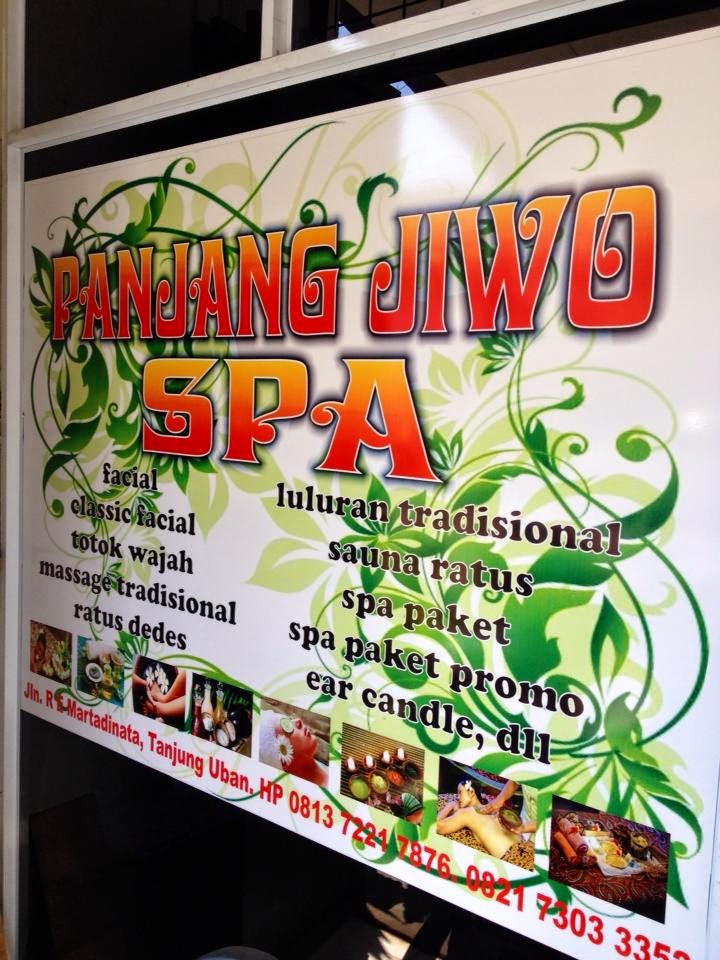 When the team met again, tea was the next thing to do. Alvin ordered 20 sticks of Satay Padang. The satay man served us 3 plates of 20 sticks each before we hurriedly put a stop to it. He was thinking 20 sticks for each person!!!

Berenda and Judith were sent to secure Otak-otak. They came back with 10 otak-otak fish and 10 otak-otak sotong. Immediately after tea, we proceeded to dinner. More like a makanthon than a bicycle tour!
Dinner was at a restaurant by the sea, on stilts, swaying whenever a boat passes by. Sunset and seafood delight! Hors d'oeuvres was Gonggong, a type of sea snail, boiled in salt and dipped in chili sauce. Main courses were curry prawns, hot plate tofu, kangkung belacan, squid fried with salted egg and Foo Yong egg. 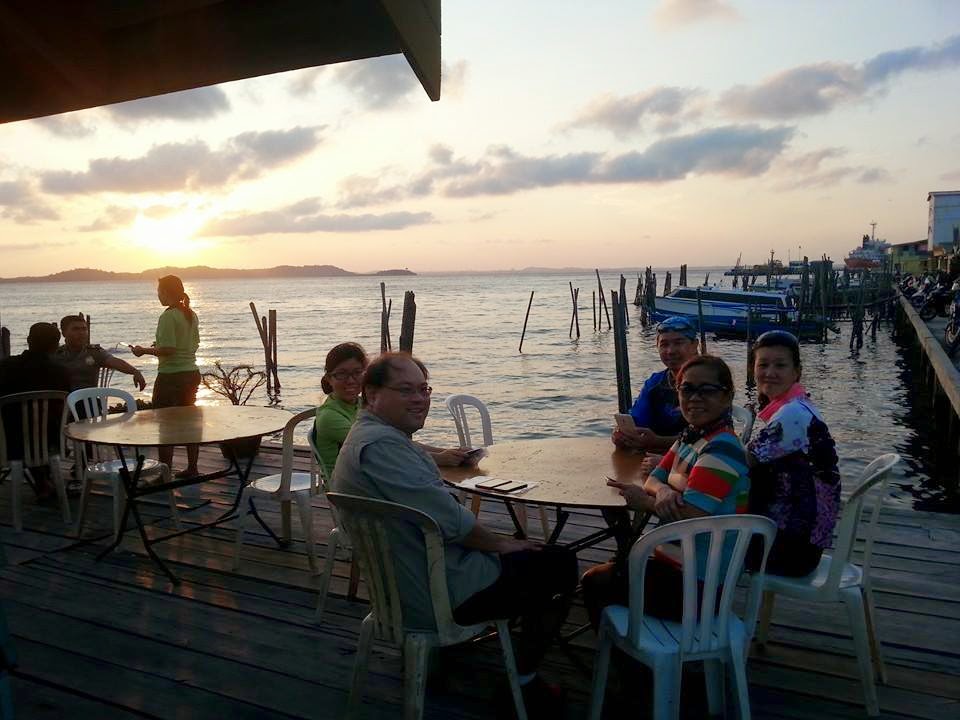 After the great tuck in, more drinks and coffee, a good dose of free wifi, the team left for some shopping. Alvin led the group through a narrow alley between the shops. The alley was dimly lit by orange light bulbs. The platform was an assemble of 5 wooden planks but as you go further in, some were broken and you then ended up with 4 planks and later only 3!!!!

The day was beginning to turn into a circus performance with boats hopping, bicycle juggling and now, walking on narrow planks pathway!

The boys checked out a bicycle shop while the girls were busy shopping for batik sarongs. Cheap! Price range from IDR55,000 to IDR65,000. Then, poop! Darkness!!! Power failure!

A norm in Tanjung Uban. No screaming or crying of frightened children left in the dark. Even the sarong shop had a ready back up light , powered by a generator. After much selection and very little haggling, Berenda and Judith came out with 5 sarongs! This was when they started regretting! Extra mass for the next few days! 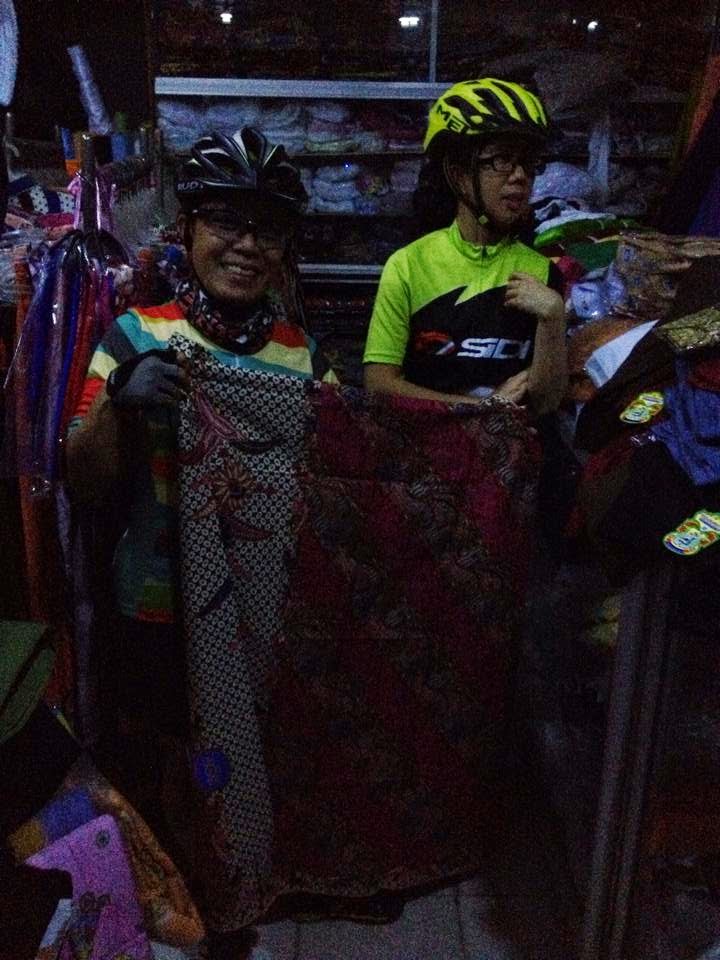 The team cycled in the dark back to the hotel. Power failure and after working hours forced everyone out into the streets. There were so many motorcycles that night! The team was relieved that the hotel had a huge generator. Even the air conditioning in the rooms were still running. But nobody really wanted to stay indoors. After much debate, the team decided to venture onto the streets.

A pleasant surprise! As soon as they were ready to step out, power was back! Hurray!!!

One stall's sign read murtabak but it was the Chinese Ban Chan Kueh. Alvin said no to Satay Padang. There were more signs of Mie Basah, Tauhu Goreng and such! Then we came upon a supermarket! Mini Magnum with almond!

On our return trip to the hotel, VT spotted a sign, Terang Bulan. The stall owner explained he serves murtabak. Curiosity got to us, because we returned to order just one piece for trying. This murtabak was clearly no ban chan kueh. It is more like an Indian murtabak. Here, minced beef with egg and spring onions are wrapped in roti canai but deep fried. It was delish! More tea and coffee to go with Murtabak. 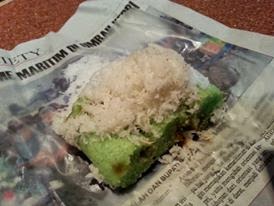 Then our makanthon continued on our return walk to the hotel. This time, Putu Buloh. Steamed rice cake, flavored with pandan juice, filled with gula Melaka and topped with grated coconut. Another yummmmmm!!!! This Putu Buloh owner was on a mobile stall powered by his motorcycle. He gave us a goodnight story of how he went about selling his food with a bamboo whistle, powered by steam, instead of using the conventional motorcycle horn. With that bamboo whistle, he had personalized his own call!

Posted by Oldyonfoldy at 6:45 PM