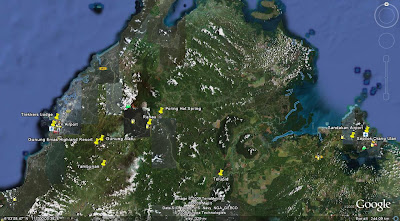 I'm one of those who think planning for a trip can actually be more fun than doing it. Emails between myself, Mike and Kevin are flying around these days as we make preparations for our upcoming ride to the Northern part of Borneo from Oct 1 - 6.
The plan is to fly into Kota Kinabalu, ride through the mountain ranges, enjoy Poring Hot Springs and end up at Sandakan where it marks the start of the infamous death march by many Australian Diggers in WW2. It promises to be a 400km ride and this trip was inspired by fellow adventure cyclist Mike Khor of Wheelsopher who did this some years back. His trip is recorded in his blog here.
All of us will be riding foldies as we may have to take public buses/minivans and the ability to do that is absolutely essential. I can never ask for better company as I shall have the privilege of 3 medical professionals in the team!
.
6 more weeks. Can't wait... but then again, today was quite a super special & blessed one too.
.
This is the day the LORD has made; let us rejoice and be glad in it. Psalm 118:24
Posted by Oldyonfoldy at 7:18 AM 4 comments: 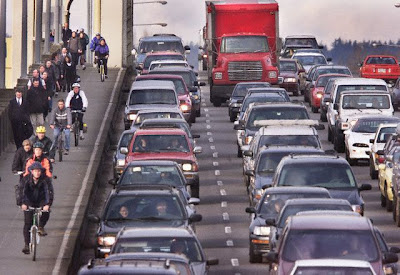 Pic courtesy from cycling.com
With the economic crunch, desire to stay healthy, being sick of traffic jams and perhaps a noble desire to contribute to the green cause, bicycle sales in Australia have taken off in a huge way. Just in NSW, over 430,000 new bikes were bought compared to 75,000 motor vehicle registrations. This is indeed a cause for celebration as more people realise the benefits of being on pedal power but it does create a growing problem.
With more bicycles on the roads, this has caused many motorists to become increasingly frustrated as they are forced to share their "domain" with these slow moving wheels. In some ways, it could be a time bomb waiting to go off if nothing is done about it.
More over, the vast difference in speed is a great cause for concern. There is a lobby group, the National Motorists Association Australia, who believe cyclists cannot safely integrate with fast-moving vehicles on busy roads. Their spokesman Michael Lane claims, "Motor vehicles and bicycles are fundamentally incompatible. Cars are fast and heavy. Bikes are slow and flimsy. The two do not mix. It's dangerous and it's not fair to either cyclists or the motorists." 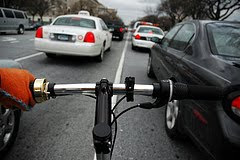 No prizes for guessing which foldie this is!
I'm not sure if I share his opinion but with proper infrastructure and traffic planning, I believe cars and bicycles can co-exist happily together, especially with dedicated bike lanes.
. 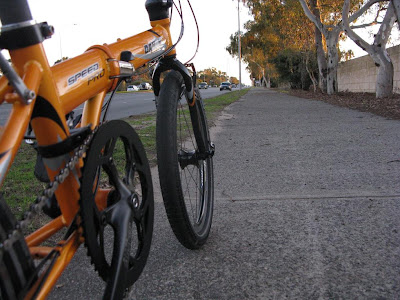 They have done so in the Nordic countries for many years in the past, and will continue for many years in the future. But it won't be easy for Australia and other countries just starting on their journey with the bicycle. It will take very strong political will to give bicycles the rightful place on the roads and the hills in front, though formidable are not insurmountable.

ps: How can motorists and cyclists be friends.... the article from SMH dated 14 Aug 09 which this post is a response to.
Posted by Oldyonfoldy at 5:45 PM 1 comment: 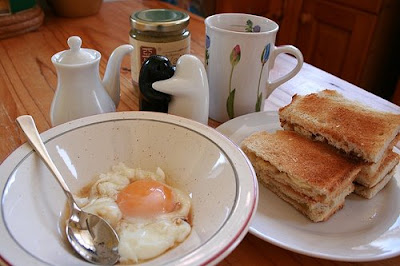 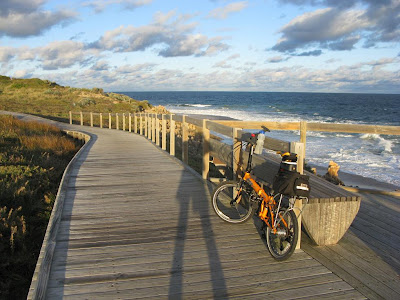 It was a big rush to make it for the 609am train to Mandurah this morning, and I only just scrapped in. Rod was sitting patiently as always at the platform, reading a book looking very relaxed. When our train came, we moved to the last carriage with our bikes only to be pleasantly surprised to see Pat grinning widely with his red Dahon Speed 8 in tow. 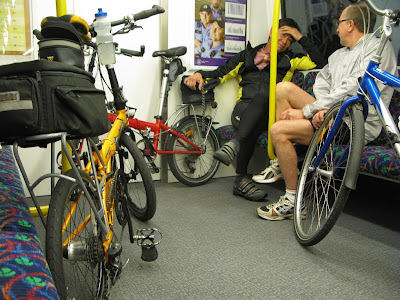 What a wonderful day this was going to be as we met Ken at his Mandurah home, and cycled together in absolutely glorious weather. As Rod said almost poetically, "Isn't it marvellous to be out here away from the pollution, away from the stress and cycling along the coast with fresh sea breezes?" With the morning sun lighting up the sky, I could not agree more and its times like this that I truly give thanks to Him for being alive and for the beauty panned out before my eyes.
.

We noticed that Pat was not his usual energetic self (former tri coach) as he was lagging behind and at 15km mark, he was nowhere to be seen. I decided to back track and in front of me was a red foldie lying pitifully on the bike path, and a black body sprawled motionless near it on the grass verge. I turned cold at that sight and rushed to his aid, expecting the worse. Fortunately, he was still breathing and came around after a while. It seemed that Pat too rushed to make his 543am train and skipped breakfast. Thus, he became Hypoglycaemic - low sugar level. 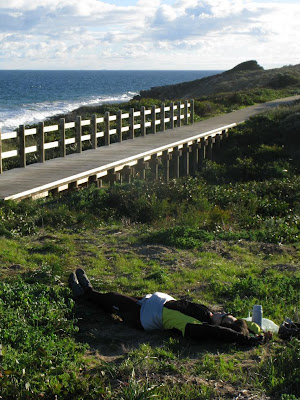 But what followed really scared me stiff. While I was picking up his fallen Speed 8 and parking it properly, Pat got up and tried to stand. He blacked out again and collapsed to the ground like a lifeless rag doll only to hit his head really hard on the concrete path. The impact of that loud sound made my heart stopped! If he wasn't wearing a helmet, Pat could very well have had very serious head injury. 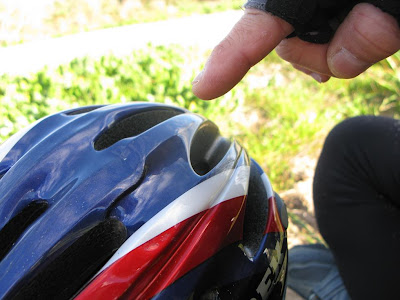 The ride was cut short, morning tea venue was aruptly decided. I fed Pat with hot tea, chocs, grapes and an Otak Sandwich which really brought life to him. Both Ken and Rod were kind enough to ride back to Mandurah to get Ken's SUV and we all ended up enjoying Cappuccino and Latte at the Jolly Frog Cafe, with our foldies snugly in the boot. 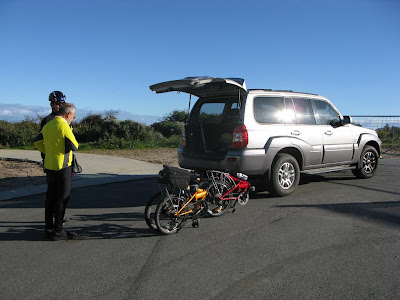 I've learnt 3 precious lessons this morning. Firstly, always wear a helmet. Secondly, always ride with a buddy. They will save your life. Finally, rushing for early morning trains and esp skipping breakfast can be very dangerous!
. 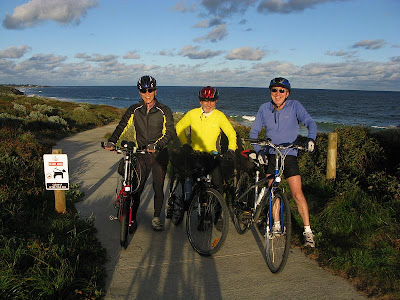 ps: Pat later emailed me to say he was confident that he was in good hands and was not worried about the outcome during the whole ordeal :-)
Posted by Oldyonfoldy at 10:36 PM 5 comments: