Why haven't I got a folding bike? 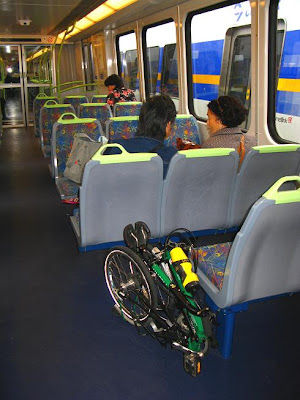 My Bike Friday tikit riding happily in the train
This week's cycling venue is the beautiful Swan Valley and in making meeting arrangements with my buddy Uncle Ken (who has a MTB) on the email, this is what he wrote...

Now I know why you love the fold so much. I am not able to board a train from Mandurah until 09:02 hrs. Then the latest I could leave Perth is 15 :48. Alternatively I need to get some K's up on my Hyundai Terracan so I could drive to your place and ride to Bull Creek with you.. If this is o.k. let me know what time to arrive and your address. The earliest I can board a train to the City at Bull Creek is 09:10. The latest I can board a train from the City to alight at Bull Creek is 16:15. Oh why haven't I got a folding bike?

Transperth states that full size bikes can only board after 9am and before 4pm but foldies, no such restrictions. Enough said :)
.
Lynette Chiang of Bike Friday here talks about her experience of using a folding bike as her personal transport. Definitely worth a listen. Be warned though, as you may be asking the same question as Uncle Ken after watching this...
.

Posted by Oldyonfoldy at 4:57 AM No comments: 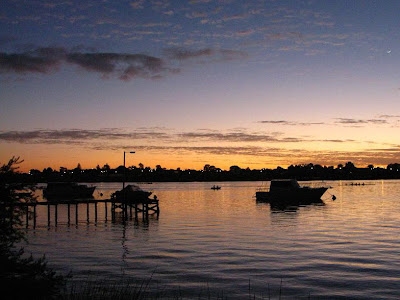 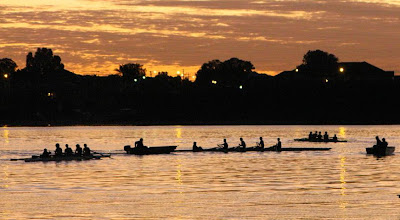 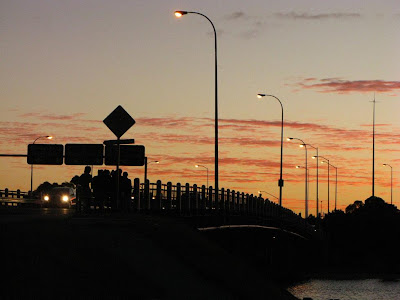 Blowies - last night's unwanted catch from the jetty.
Even the Seagulls won't touch them...

There is something magical about early morning rides. Today was exceptional as the weather was absolutely perfect. It was a cool 14c and it smelled fresh after a light drizzle. It was still dark when I met Ken at 0645 for our usual Wed ride to Point Walter.

It was great to see his young son Scott as well at Canning Bridge. He rides a Specialized carbon roadie and is an ardent MTBiker as well. Seeing him all decked up in matching lycra, I remarked, "You are going to get bored riding with us mate..." but he replied he was here for the company. Great attitude from a guy who averages 38kmh, and maxes 72kmh! Scott has my respect. 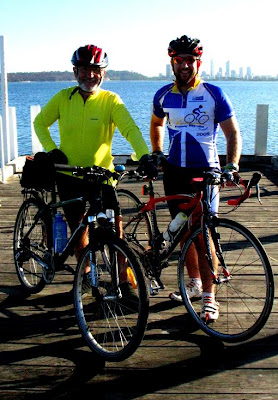 The mysterious thing about cycling here is though the route may be the same, the weather always changes and today, everything seems all too beautiful. The soft orange hue of the sun peeking slowly through the clouds, lighting the darkness gently was divine. It was also nice to see the world gradually wake up. I'll let the pics speak for itself... 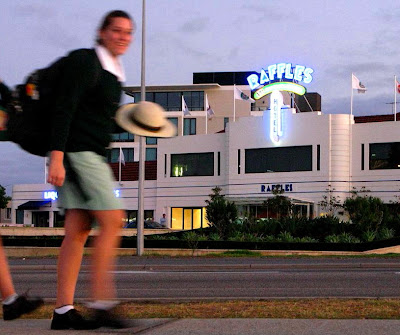 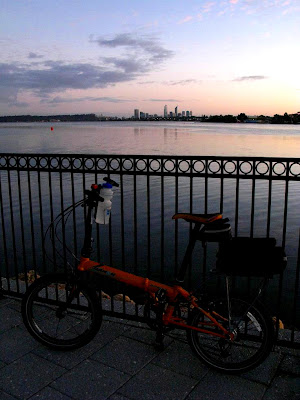 This old song by Bee Gees seems very appropriate for the morning.
http://www.youtube.com/watch?v=l2nMFrkL4l8

Posted by Oldyonfoldy at 12:13 AM No comments: 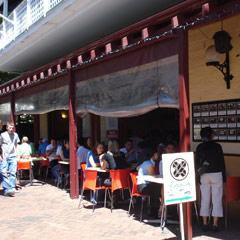 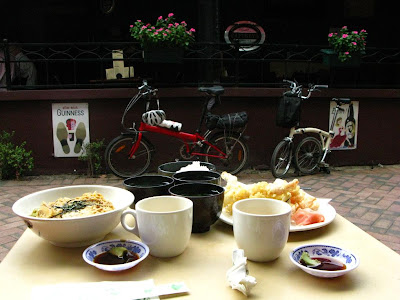 Cheap & good Japanese fare, with plenty of parking for our bikes 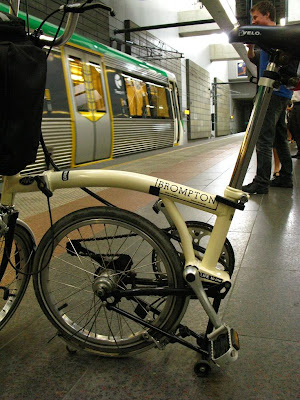 Pat and I decided to continue riding to the city after our usual weekly ride with Rod and Ken. This time from Point Walter. It was one of those "we can't stop riding" mornings. The 10km or so by the Swan River was too easy, and we smirked at the cars on the highway, all stuck behind one another, as we passed them by at a leisurely 22kmh.
After a quick errand in Northbridge, Pat brought me to Taka Japanese Cuisine. It was truly fun zipping through all the small lanes in Perth city and truly, I can't think of a better way getting around than with a foldie.
Taka is one of those cheap & good eats. From about $4 to $8 with a miso soup, you get a decent Japanese set lunch with complimentary tea. My tempura ebi with veggies was delightful. As expected from the hi-tech Japs, they give you a remote circular buzzer which gets activated once your order is ready. The al fresco ambience was described by one forummer as "cafeteria dining meets Japanese cuisine" but it suited me fine.
The plus point is that it has plenty of outdoor and safe parking for the foldies (a very impt consideration). Feeling too full and bloated, we decided to take the very efficient train back. Pat headed north, and I, a 10 min ride south.
.
Lunching with foldies, this is as good as it gets! 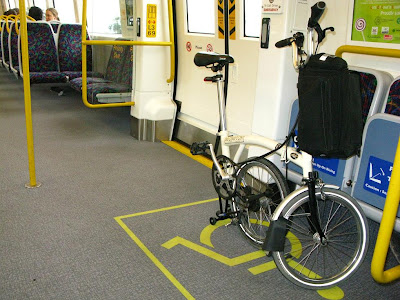 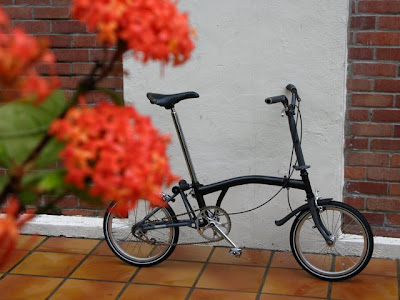 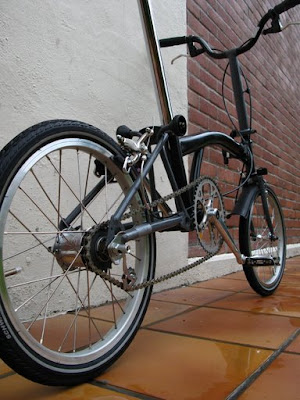 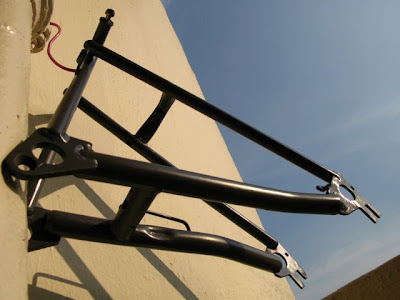 My good buddy came across a "Brompton" at the bike cemetery recently. The former owner had actually made it into a motorised tricycle by welding part of a golf cart onto its rear frame and I'm not sure if it worked. But it certainly was extremely neglected and worst still, a truly disgusting Frankenstein project. An abomination to all foldies!
.
Punctured tire, cobwebs, seat and chain nowhere to be found, rust everywhere, missing parts etc. Only his very sharp eyes spotted the faded Brompton decal on its red frame.
.
As a founding member of the SPCF (F for foldies and not animals), he had had to rescue it and restore it to its full glory. After all, who has ever heard of a neglected Brompton? This must surely be the greatest sin in the folding bike kingdom.
First things first was to repair and repaint the frame. A specialist frame builder in Spore, trained all the way from Medford, Oregon undertook the task of welding and fixing the bits, and Sul did an excellent job. Next, a brand new coat of black paint applied judiciously for that classic look.
. 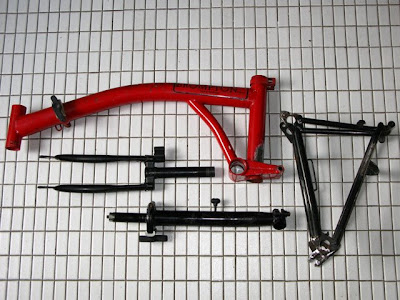 Phase 3 was to order all the missing parts from the UK. Not as easy it sounds as this was a 1980s Brompton and the rear hinge frame was somewhat smaller. Some new parts too would not fit this ancient Brommie and thus, the arduous task of actually making and machining those parts one by one, by hand. He even managed to find a 1970s Sturmey Archer hub that fitted in beautifully. 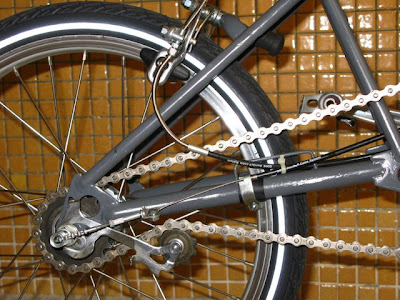 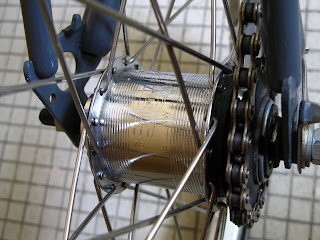 It took 3 months to slowly undertake the restoration and the resurrected Brompton is finally ridable. Save for a chain that keeps falling off during the fold (soon to be rectified), it is able to hold the honour of being a Brompton once again.
.
Here it is in all its British splendour. Looks good , doesn't it?
. 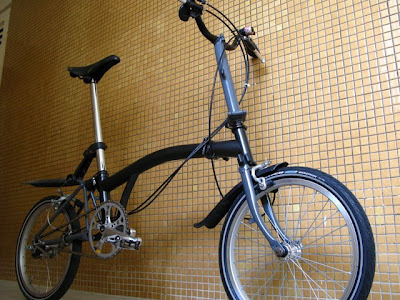 ps: I asked him why bother with this and not just get a new one. He replied anybody can plonk money for a new bike but he is not anybody. I think my buddy is the Saviour for sick and dying foldies but unlike the real Saviour who took 3 days to rise from the dead, he took 3 months and a whole lot of perseverance and determination. An early Easter project, you might say!
.
They killed him by hanging him on a tree, but God raised him from the dead on the third day and caused him to be seen. Acts 10:39,40
Posted by Oldyonfoldy at 12:45 AM 2 comments: 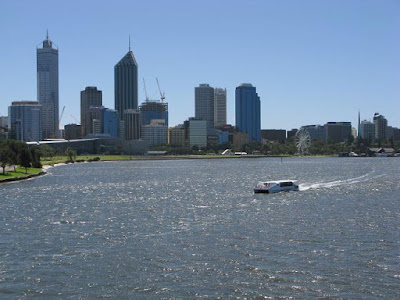 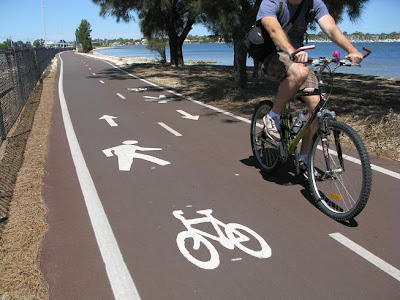 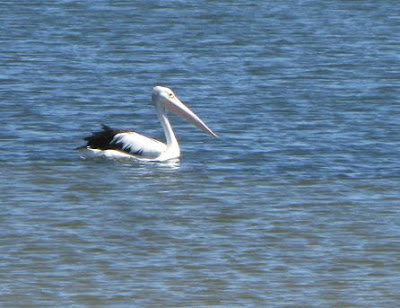 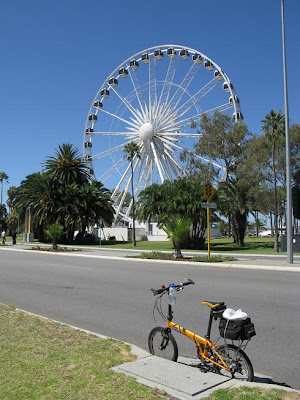 A very kind friend Raymond allowed us to use his huge Avensis MPV till our new car arrived. Friends like him are truly a gem and it was time to return it to his townhouse in the city. Driving there was not a problem, but how was I to come home without troubling people? Good thing I had my emergency transport - the foldie! Chucking it into the spacious boot, I drove off merrily. However, I arrived at his home slightly flustered, after getting stucked on the freeway with bumper to bumper traffic. There was a 3 car collision.
.
A quick unfolding of the Speed Pro and I was on my way through the city of Perth. Cities mean traffic, cars stuck behind each other and this being mid-day, it was "chockers". But being on a bike, I imagined myself as a courier and weaved through too freely. I'm not sure if this was allowed but heh, I sure ain't waiting behind a car and getting all poisoned with awful carbon monoxide gases.
.
Managed to grab some lunch - crispy roast pork at ABC Chinese restaurant along William St and soon I was on the bike path back home. I took the opportunity to see the famous Bell Tower at Barrack St Jetty. Was a bit too early for the bell ringing at 1230pm. 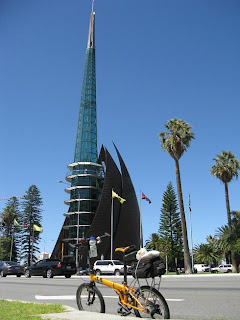 And of course, I visited the new Wheel of Perth ala London Eye, Singapore Flyer et al. It seems like you cannot be considered a world class city unless you have this Ferris Wheel thingey these days.
. 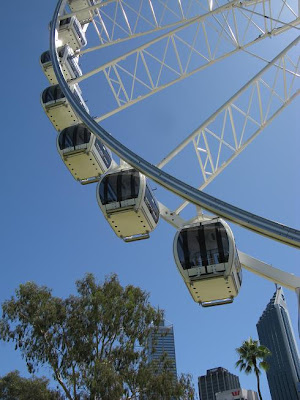 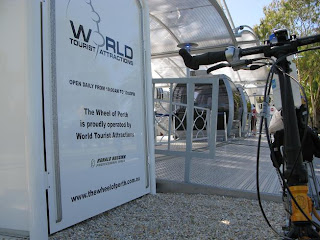 I rode along the Swan River and passed King's Park and was soon heading south on the bike path hugging the river. The directions are abundantly clear with helpful distances given. But one sign that really got my goat was the yellow "Caution Cyclist" everywhere - for the benefit of pedestrains. Yes, beware of us, we are the Big Bad Wolf waiting to eat you up, you who constantly us slow down! Are we cyclists that inconsiderate I wonder? 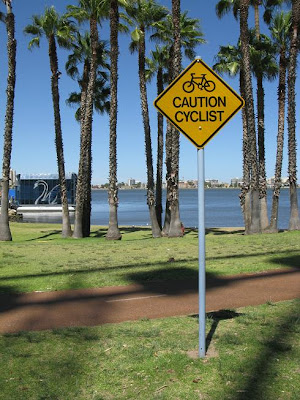 It was an easy 17km ride home that took just under an hour. No rush. Snapped too many pictures and stopped too many times to admire the views. I think my next errand in the city will be on the saddle. This surely must be one of the most bike friendly city in the world. 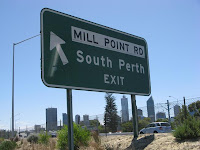 Posted by Oldyonfoldy at 5:01 PM 3 comments: