We survived the Hail Storm 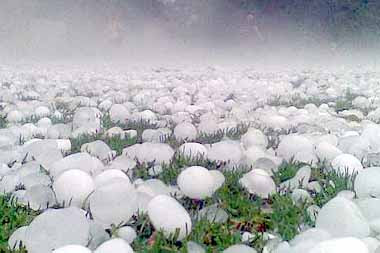 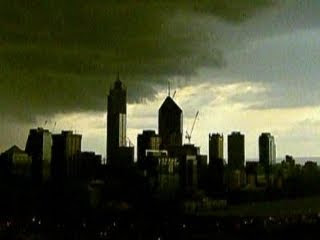 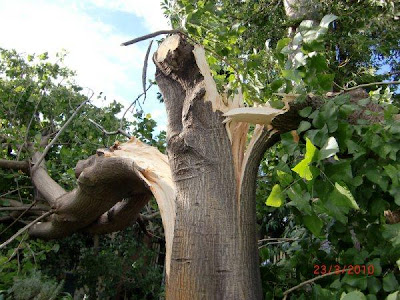 A massive storm hit Perth 2 evenings ago (22 March) at just after 4pm. 2 months worth of rain came down in just 2 hours bringing with it hail stones, some as big as golf balls. Causing 100 million dollars of damage, Perth was declared a natural disaster zone.
I was working on my computer when it started to rain which was then followed by 1 cm hailstones. It was exciting to hear the roof getting stung by hi-speed pellets from the sky and I was glad my car was in the garage. Seconds later, the wind really increased and was at 120kmh at some parts of the city. Then massive rain and we bolted all the doors and windows. Soon, my backyard became an unwelcome swimming pool.
As we were just holing up in the house, suddenly there was a waterfall from the ceiling. The gutters had apparently overflowed and my living room was getting very wet. I took all the 11 bath towels we had to try mop up the water and disconnected all the electricals for the water was rising and approaching the power sockets. Fortunately, the rain eased a little and the waterfall ceased.
Although Jem and I had lots of clean up after that, we were fortunate that nothing was lost or broken. Many people in Perth suffered damage to property, cars etc. Traffic lights were down, power was cut, mobile phone lines down and fallen trees on the roads causing massive jams.
.
The poor cyclist at 1:37...
O yes, my foldies were dry and snug as they were kept indoors although my Bridgestone XO5 in the backyard got the washing of the century. I reckon my next task is to give it a good lubrication this weekend.
.
A quick drive this morning saw many of the bike paths littered with the storm's debris which I hope will be cleared soon. Apart from that, everything seems normal again and we are grateful that all is well. No need to water the gardens for the next few weeks I reckon.
Posted by Oldyonfoldy at 5:53 PM

That is just freaky. Glad you made it through without any major damage. I hear the morning after is bright blue and sunny. Bizarre.

Good to know you guys are fine! But what a mess!!!