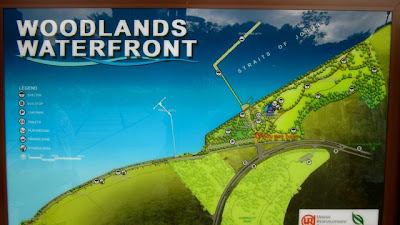 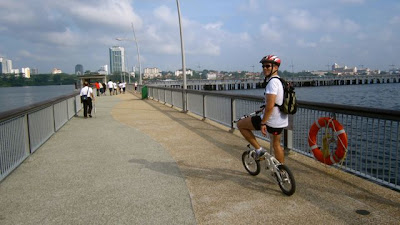 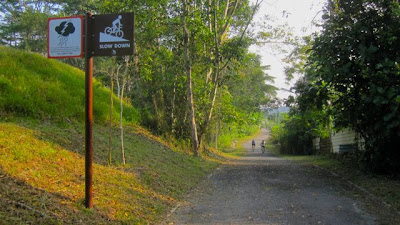 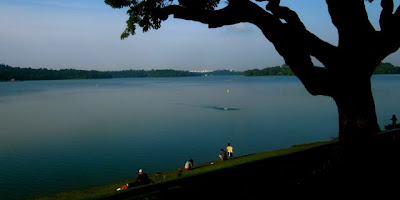 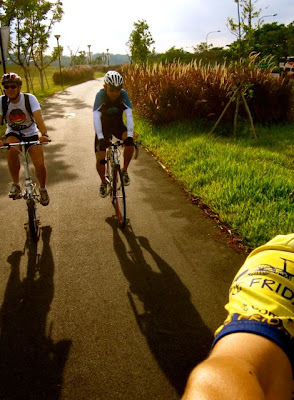 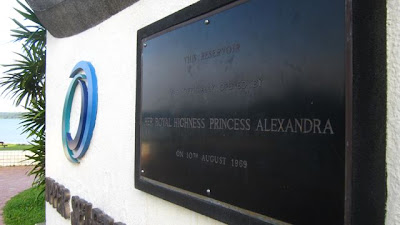 It was a great joy to ride with my buddies the 2 Chris-es for an early Sunday morning ride in Singapore. The weather was perfect, cool and cloudy. We wanted to see the newly opened Woodlands Waterfront Park. I've read about this from another friend TW and this was one of the must-dos while I'm here in Spore.
CT and I rode to Thomson to meet up with CW and every Sunday, this part of Singapore transforms itself to roadie paradise. Hordes of roadie groups would take this route and for very good reason, its quiet, very green and skirts around the beautiful Seletar reservoir. Riding a Tikit and a Curve, the roadies were probably quite amused to see 2 kids' bikes on their race track. 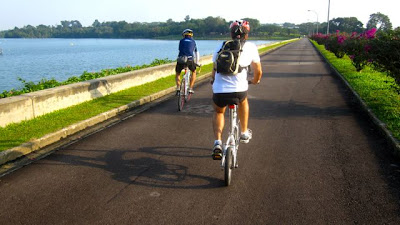 What got even more bizzare was CW decided to ride his nearly 20 year old titanium racer so our group of 3 was indeed so counter-cultural to the men in colourful lycra brigade. CW is an expert on the backlanes of Singapore so it was great to be brought along Old Thomson Road where monkeys play freely along the road, mischievious as ever. We also rode past the Seletar Golf course and I was very pleased to see the look-out tower of Seletar Resevoir. The last time I was there must have been during a primary school excursion some 30 years ago! 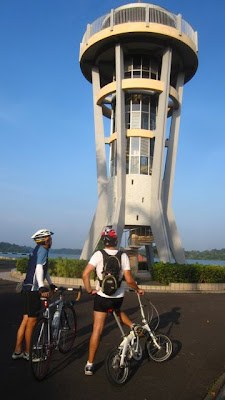 Just 1km into Mandai road after the turn-off, CW led us to the start of a PCN (Park Connector) and this was an old road that used to be an army training ground. Parts of it was rough and I got a bit worried for my new Kojak road tires. 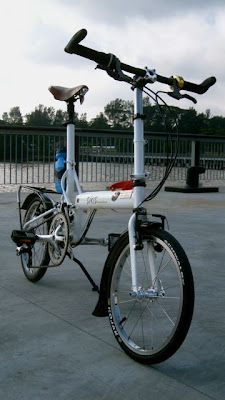 This led us through the thick of the rain forest which was absolutely breathtaking and we passed some flower orchards with their Chinese New Year colourful plants all ready to go. 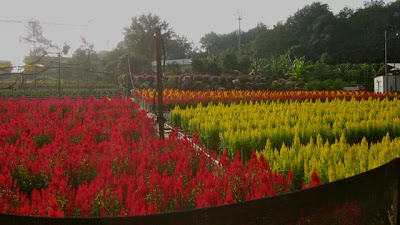 This was a mere 2km road that ended too soon and we once again arrived to modern Singapore at Woodlands housing estate, via the Singapore Sports School.
We had a peek at the newly opened Republic Polytechnic and took a group pic on its mirrored wall. 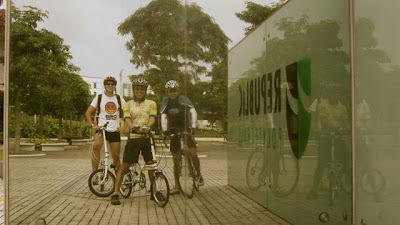 The short-cut that led to the Woodlands Waterfront Park then became a big challenge as it was gravel and both CW and I had to ride carefully on our skinny tires. CT on Big Apple tires rode past us with a big grin on his face but there would be another opportunity to get our revenge. Though the path was rough, the views were magnificent. 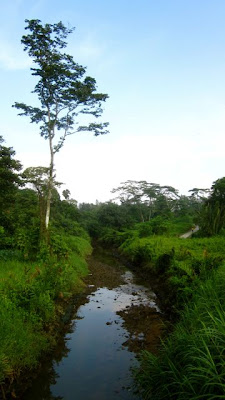 Upon arriving at the WWP, there was a big welcome for us with music, crowds, food and police. Little did we know it was the official opening with even a Minister gracing the occasion. CT remarked to CW, "Heh, you don't have to go through such trouble for us lah!"
Being averse to crowds, we rode straight through and soaked in the views that the impressive L-shaped jetty offered. Here, the causeway to Johor could be seen clearly as well as the city skyline of JB across the Straits of Singapore. We spent too much time here just joking and enjoying ourselves with cool sea breezes and a cloudy sky. 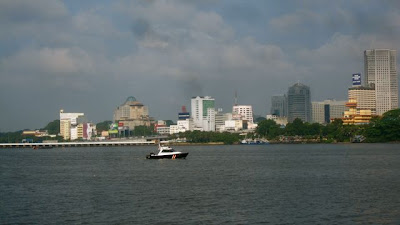 CT had to rush back home as he had a 10am curfew and could hop on a bus thanks to the versatility of his Dahon Curve folding bike while CW and I made our way home. A most satisfying 46km ride all in on a Sunday morning. 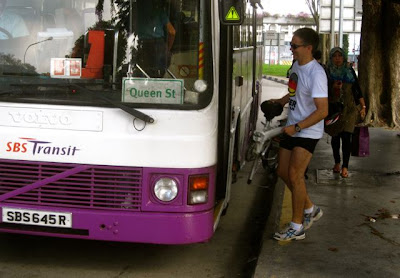 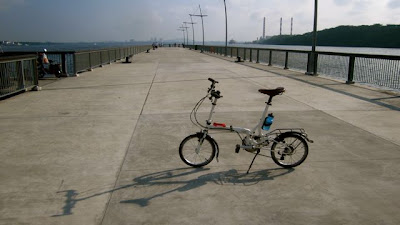 Posted by Oldyonfoldy at 4:31 PM