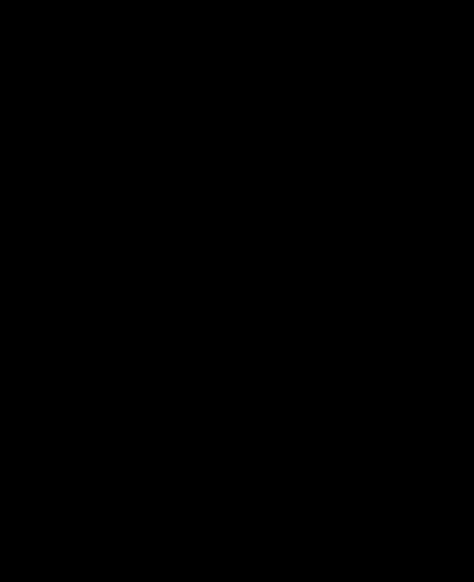 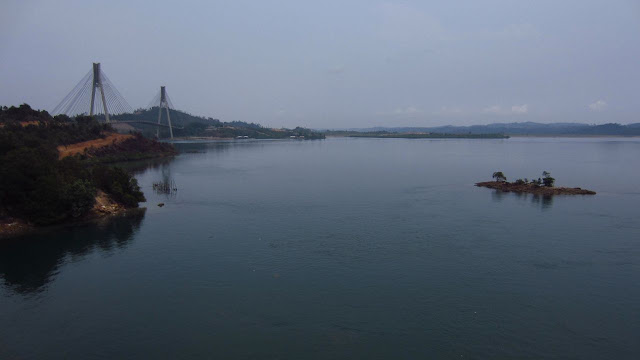 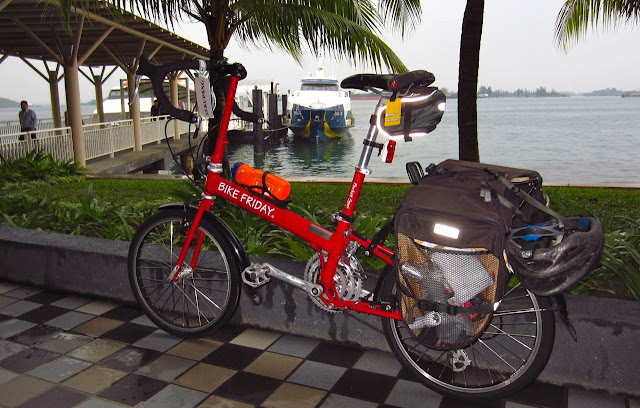 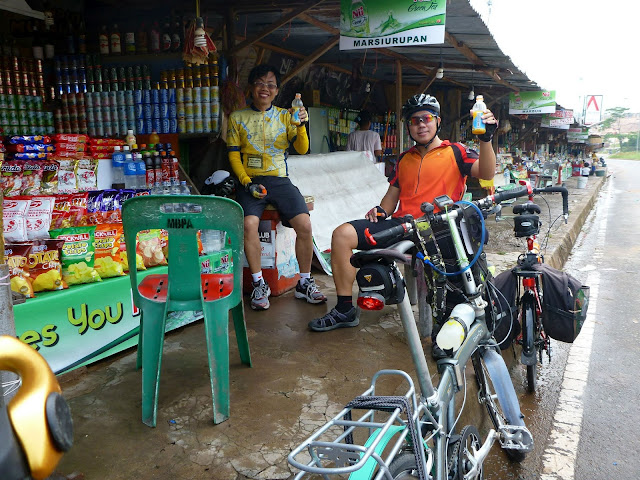 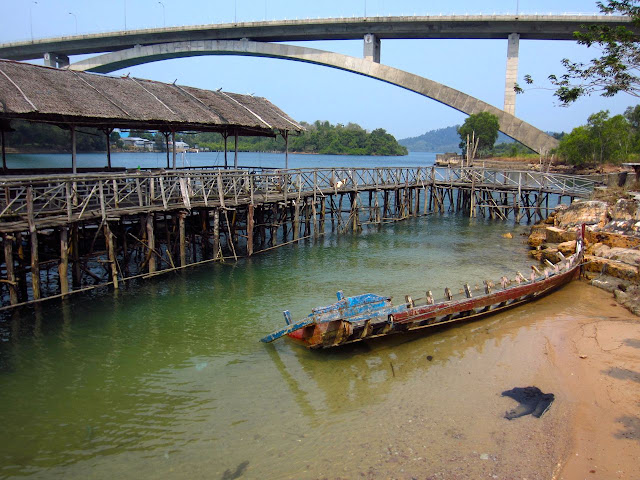 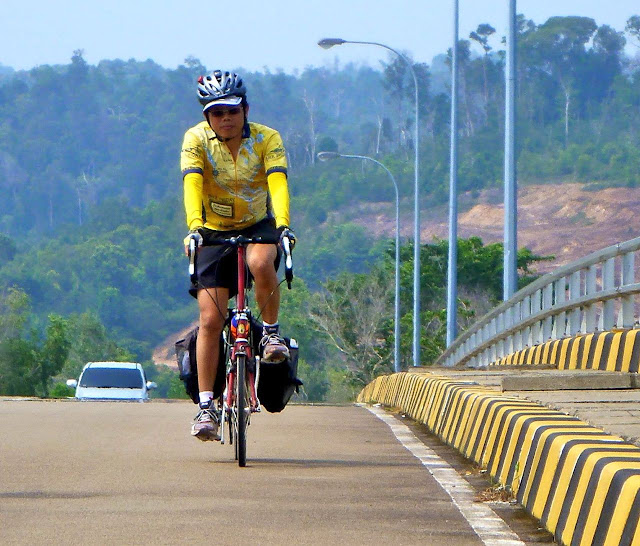 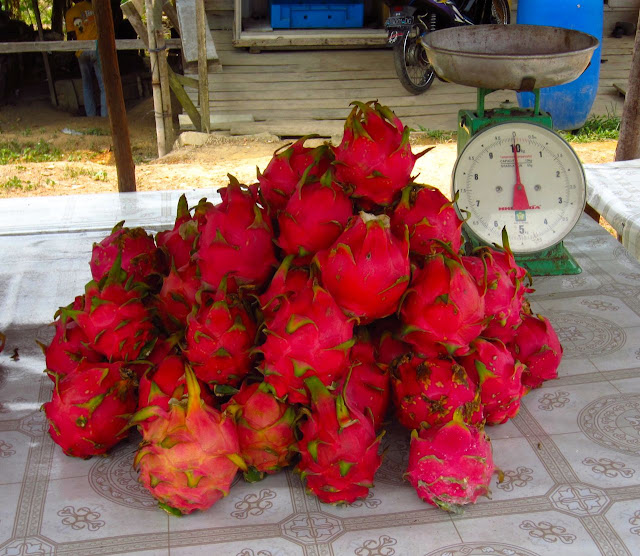 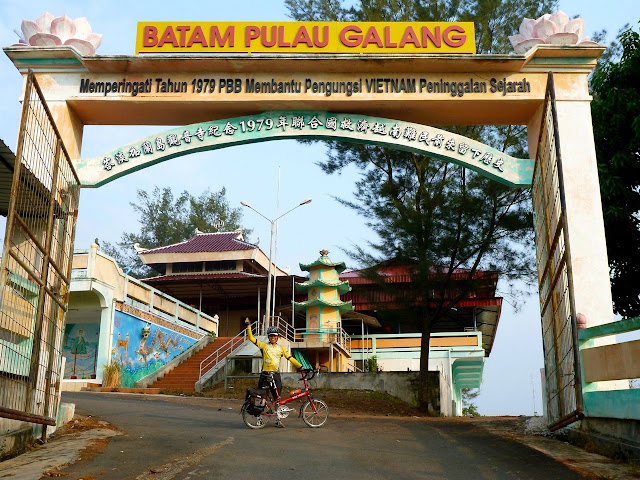 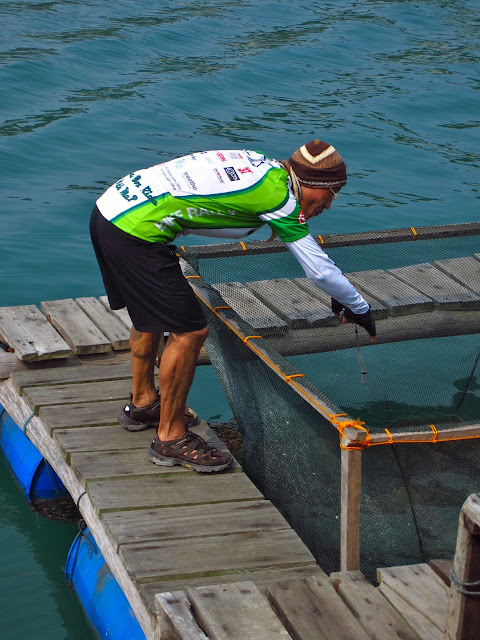 Just an hour's ferry ride south of Singapore in the island of Batam, lies a little known cycling route that Jan Boonstra, a famous Dutch cyclist and cartographer, describes as cyclists' paradise. This is a 64km beautiful road that links the 3 main Riau islands of Batam, Rempang and Galang with 6 bridges. It was one of President BJ Habibie's dream to connect these islands together to form a formidable economic zone. Alas, the only thing formidable about the project was its cost where some pockets were said to be well lined. It is now a tourist attraction more than anything else, but for us cyclists, long deserted roads with scenic bridges make for a compelling reason to ride it. 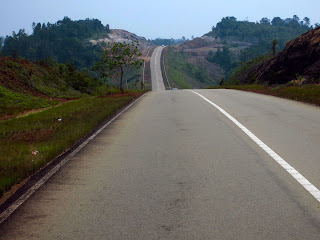 And ride it we did, all 3 of us in late September. KC, YC and I jumped on the early morning 830am ferry from Harbourfront Spore with our foldies and arrived at Sekupang, Batam on an easy 45 min boat ride. The weather was a bit rainy and we waited it out with a nice hot breakfast at the noisy domestic ferry terminal's canteen.

Setting off at 10am, the roads were still a bit wet and it was still drizzling but that made for a very cool start. Traffic was manageable considering we were cycling through a heavily built up area until we arrived at the 16km mark, where we turned off to the southern gateway to paradise. I was told that drink stalls were scarce as this highway was practically deserted so we stopped to watered ourselves good when we saw a string of them. The drink seller was a jovial and friendly fella and was gracious to pull a couple of chairs for us. We found out later that there are plenty of drink stalls along the way! 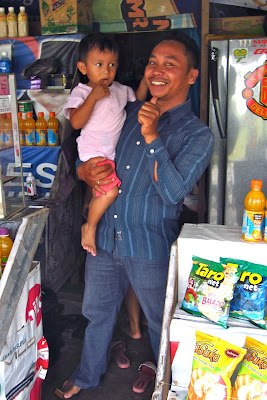 Just 3km into the ride we encountered a massive traffic jam. So much for all the feedback of quiet roads, I thought until I discovered that the road was severely flooded due to last night's rain. It was fun to weave through the thick traffic until I got to the front. The choice was either to ride through the flood which was about half a meter deep or riding through a muddy side road. Since all the mopeds took the latter, we did the same. It was harrowing slip sliding away in wet mud on skinny Primo Comets on my Pocket Sport but the skills picked up during my early MTB days came in useful.

Once that section was cleared, the promise of deserted roads came through. It was a lovely ride but all the mud caking the various drive train components of the Friday made things a tad messy. That is why touring with mud guards is a must. After a few hills to warm us up, the first bridge came at 24km and this is by far, the most beautiful steel cable bridge in this part of the world. Riding through it was special as it is really quite an engineering feat.

We stopped to take photos and just enjoy the scenery before us of many islands and emerald green waters. This is quite a tourist spot judging from the large number of drink and food stalls clustered on both ends of the bridge. 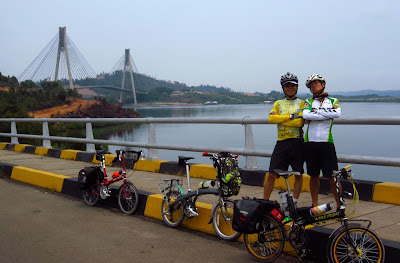 Moving on, I was surprised that bridge #2 came within 10 minutes. It was not as grand and obviously, the engineers believe in the maxim that first impressions count. Bridge #3 came at 32km marker where we stopped for coffee and Nasi Lemak. This is a fishing village with friendly folks. We had all the time in the world and were really sightseeing more than anything else as our destination was only 80km, a most manageable distance, so we thought. 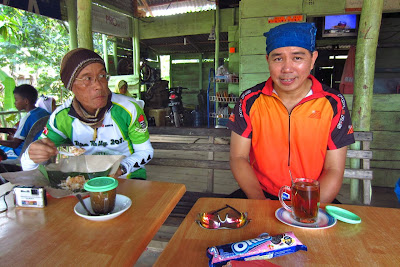 The road after that started to get interesting with rolling hills becoming the order of the day. We were grateful for cloudy weather but that still saw granny being called more often than I would like to admit. Hills are what separate the men from the boys and KC was no where to be seen. YC was kind to accompany me as I was puffing my way up and tearing down the hills at full speeds in the hope of catching up with KC. All in, there were 66 of these beauties so be warned, its not for the faint hearted. KC, a most seasoned tourer rated this route 4/5 in term of challenge. 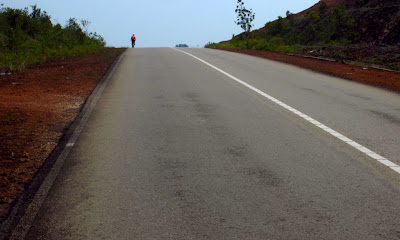 We finally arrived at the 5th bridge which offered a commanding view of surrounding islands. Lucky Seafood restaurant at the bottom of the bridge beckon us for lunch and that was much needed after all the energy expended. 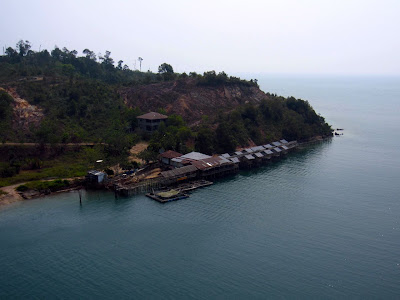 The 2 staff operation with 2 kids didn't seem to be too happy at our arrival as we interrupted their afternoon siesta, which was probably the best thing to do in the middle of the afternoon. Good thing their fresh seafood and priceless views made up for their lethargic service. A small blessing came in the form of several colourful Kingfishers that entertained us with their spectacular dives and we were enthralled by their amazing gracefulness. 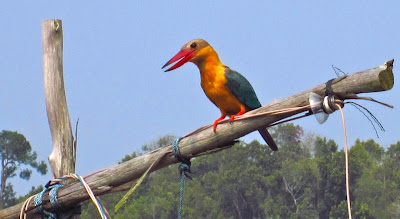 As we were enjoying our lunch, a powerful boat cut across the sparkling waters and disappeared behind a cove. We discovered then that we were just a stone's throw from the seaside town of Galang, where we next veered off the highway to investigate. This was the jumping point to Tg Batu in Kundur that leaves at 10am and Tg Pinang in Bintan at 9am, or is it the other way round? Rats, I forget. 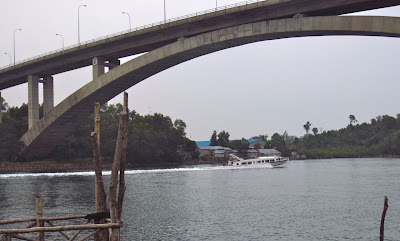 This turn off is also where in the late 1990s, a whole lot of Vietnamese refugees sailed all the way from communist Vietnam and landed here. They stayed at Galang Refugee Camp for up to 15 years till they got resettled by the United Nations. 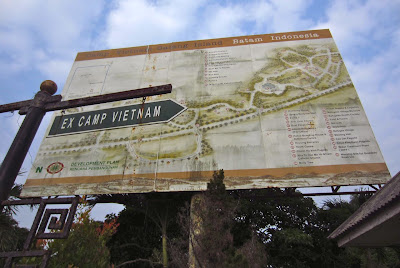 The only thing left behind now is an old Catholic church, a very nice Chinese Temple and sadly, a rather large cemetery. 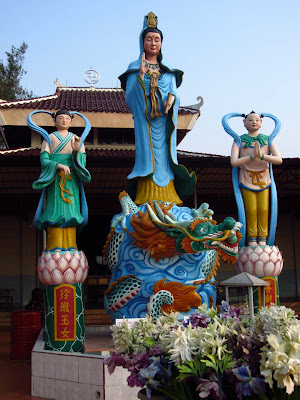 It was already 5pm when we picked up the pace again and it was starting to get dark and our legs were getting fatigued from the many hills that sapped us. 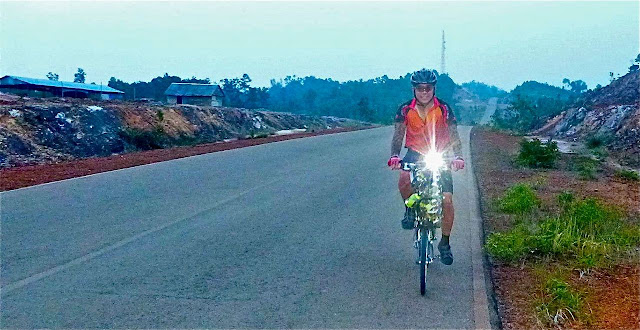 I thought the last leg was really the toughest and when we finally arrived at the end of this great highway, I breathe a big sigh of relief. 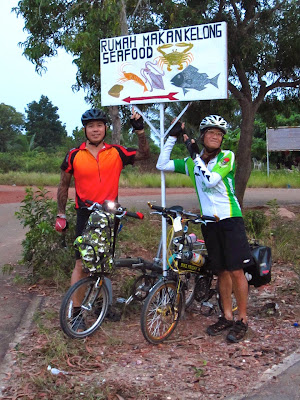 YC's GPS saw a reading of 83km and it was one of  the toughest 83km I have encountered. We have bridged the Barelang Highway and felt a deep sense of satisfaction, proud that we conquered it with so much fun, in such esteemed company.

Posted by Oldyonfoldy at 8:02 AM

Well done. Well done. If its rated 4/5 by KC, it will have to be the ride of a lifetime. More pics of the rolling hills will be great.

Please be advised that as at Dec 2012, 3 of our friends have been infected with Malaria after cycling in this area. Do not cycle here unless you are prepared with the necessary anti-Malaria drugs. http://lovethefold.blogspot.sg/2012/12/malaria-alert-in-batam-indonesia-dec.html

Hi, did you do a roundtrip, or stayed somewhere for the night?

i hope to cycle there in Feb soon !