Thin Air and not so Fat Tires - Bromo Day 3 "Staring into the heart of the Volcano." 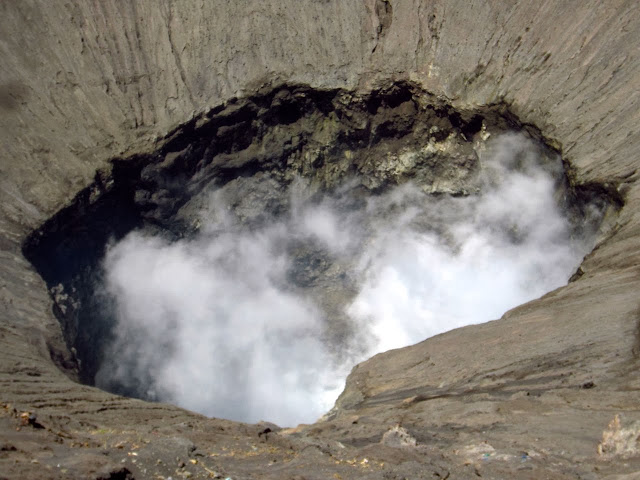 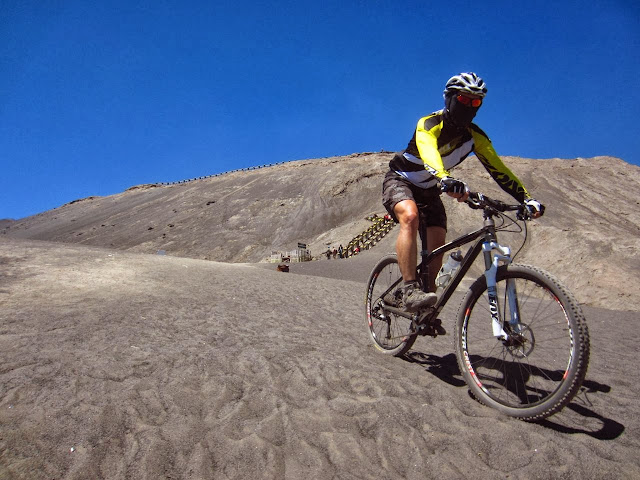 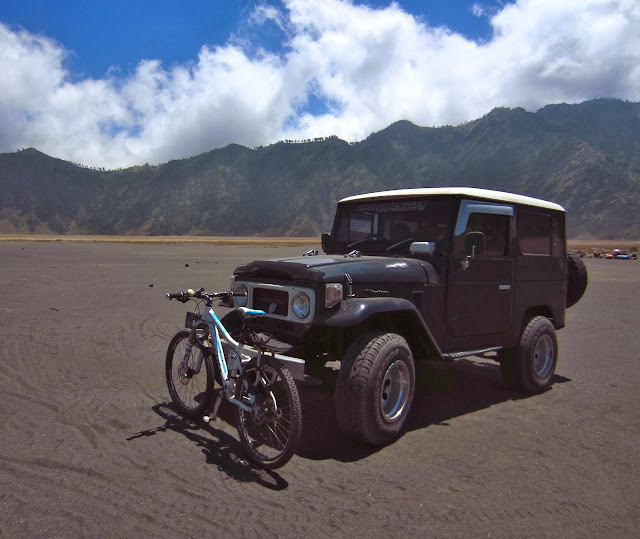 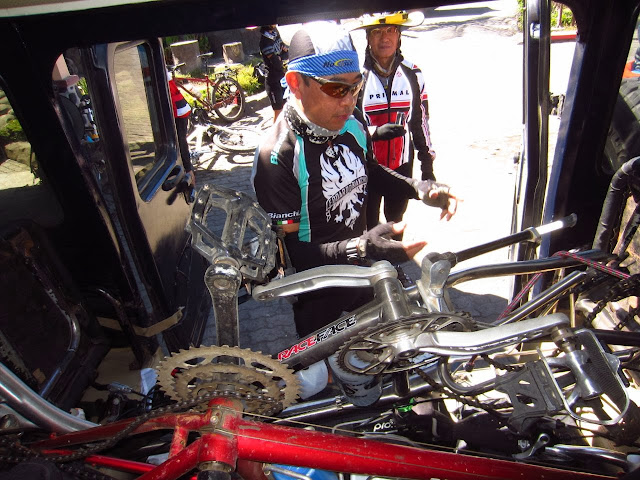 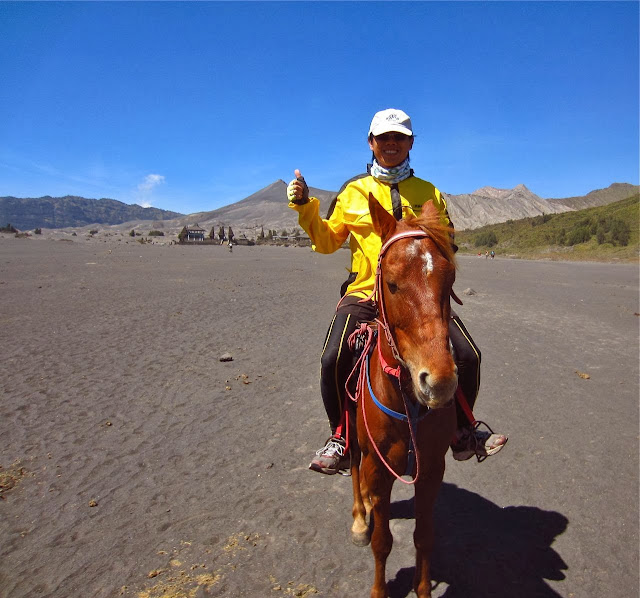 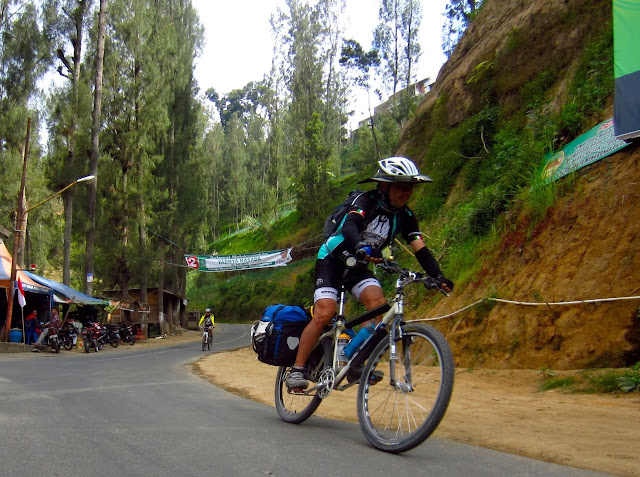 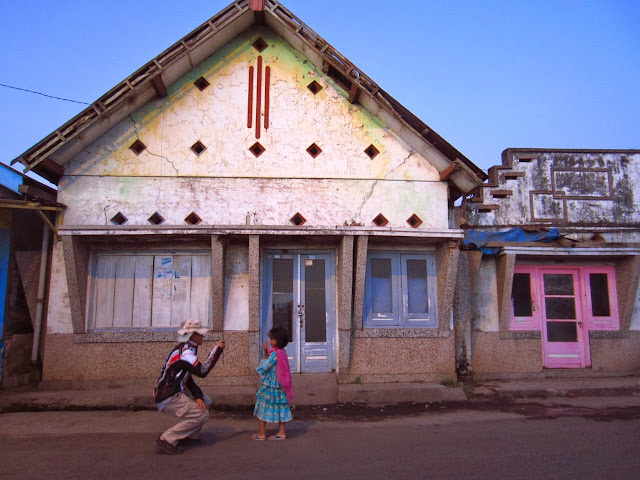 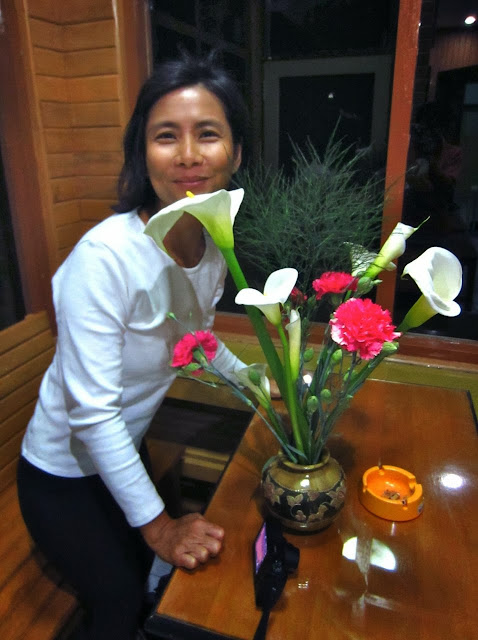 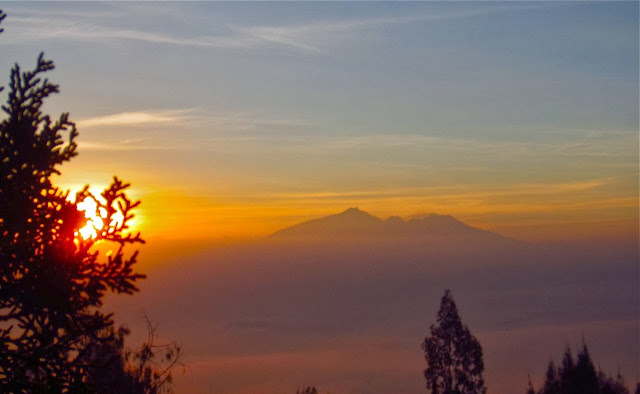 The breakfast buffet shrunk to become an ala carte as the Bromo Permai Hotel was devoid of guests this morning except us. We took our time as today was an easy one. A quick visit to see the caldera of the volcano, then a climb out of the crater and a fun 14km downhill to the town of Tosari. After breakkie, we went for a walkabout around town in the cool morning air. 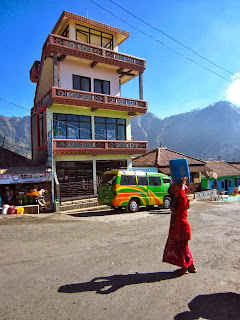 Fascinating to see the happenings of the town and one resident dog recognised Chris even after 5 years! We paid a courtesy call to the Tourist Information Centre to get an overview of the National Park and marveled at the distance we did yesterday. 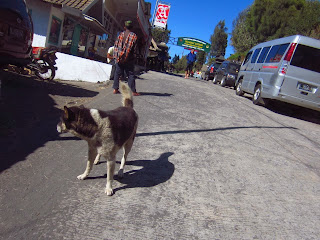 After packing everything into our panniers, our all terrain mothership, a black 1970s Toyota Landcruiser showed up in the hotel carpark driven by a 19 year old and that got us slightly worried. With careful packing by Chris, KC's and my MTB fitted in wheels taken out, plus everyone else's panniers. The 5 Amigos on their bikes took off towards Bromo Volcano while both of us enjoyed the ride on this powerful beast. 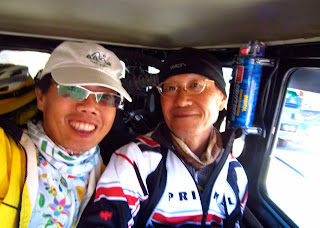 What was a tough struggle through the sand on our bikes was a piece of cake for the wide tired monstrous 4WD. We arrived at the bottom of Bromo, with no sweat and big smiles only to be greeted by horsemen offering rides up to the volcano stairway some 2km away. As I love horse rides, I jumped on this opportunity to saddle up. Our friends on their iron steeds arrived surprisingly quick and if cycling through sand wasn't enough, George, Sunny and Chris decided to ride up the volcano base.

The ride on the horses was a refreshing change from being on our bikes as all it took to move was a mere flick of our wrists on the reigns. Going up towards Bromo, the landscape was like the grayish sand dunes of the moon and it was breathtaking. 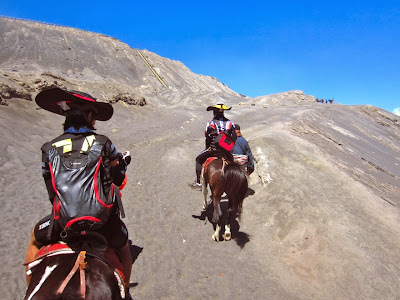 The owner had to walk beside his horse and does the 4km return trip several times a day. No wonder they all look so lean and fit. Upon reaching the stairs, it was a tough 15 min climb. Yet, the 3 crazy guys carried their bikes up these stairs and I know I love my bike, but I guess my love don't run as deep as these fellas. 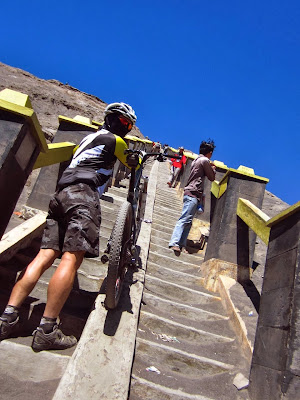 One of our mission was to honor our late friend Paul Lim there and we put his decal strategically with the best view of the caldera. Paul had visited this place a few years back with Chris. Here, we got close enough to actually smell the sulphur fumes which was really pungent, akin to rotten eggs. 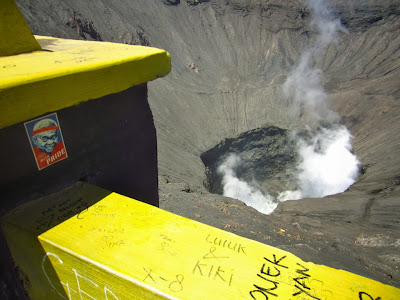 Sonny as usual was having a go posing with his MTB, exploring all sorts of interesting positions. If that wasn't enough, he found a broom and experimented to see if he could fly with it. Amazingly, he did! The Harry Potter of MTB even managed to convinced some tourists to do likewise and that provided hilarious entertainment for all of us. 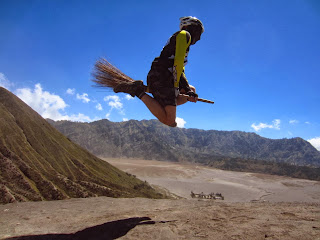 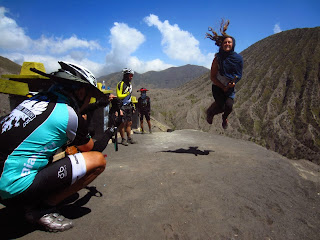 As we still had a long way to reach our destination, we had to say goodbye to Bromo and like all things, the downhill is always faster & easier than the climb. Our horses brought us to the mothership in no time while the rest of the gang on their bikes were even faster. George had time to get into a Lion King position, watching over his subjects and the vast land that he inherited from his ancestors.

It was about 3km of traversing sand to the rim of the crater before hitting the road upwards to Dingklik. The Landcruiser prepared for the climb by going immediately into low range gear. The steep climb caught me by surprise and I had to hang on for dear life as the powerful 4WD charged up with all eight pistons firing hard to overcome gravity. This was a 6km climb before we arrived at the junction where we unloaded bikes and gear, and waited for our heroes and heroine.  I was concern for Joni and wrote a note to her, instructing the driver to pick her up on his way down if she so wished. But the boys cheekily intercepted the letter and got Joni to cycle up, and she did, feeling very proud of herself, and deservingly so. 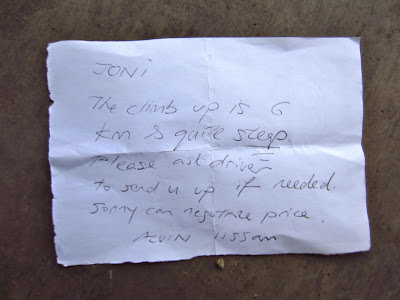 KC and I waited about 1.5 hrs and had all the time in the world to assemble our bikes outside some warungs. As expected, lunch was dismal but one cafe had Bakso which was a welcome change - hot beef ball noodles. We were so excited when the first rider arrived and as anticipated, it was King George followed by Chris, the Sultan of Spin. I really salute all of them for grinding up those steep slopes and they deserved a Bakso or two. It was fun to be reunited again and to see 7 bikes ready for the best part of the today's ride - a 15km downhill all the way to Tosari. 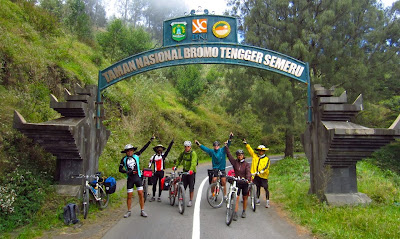 It was really pure adrenalin to be flying downhill without wings and getting our faces pressed hard by the cold mountain winds. I tried to take it slowly with Christoph as we wanted to savor the beautiful terraced plains and magnificent surroundings but it was hard as the inclines were at some stages forcing us down faster than expected. Our brakes got a really good workout. We had fun carving the many hairpins and the exhilaration didn't last very long. As they say, time flies when you are having fun.

Our abode for the night was a beautiful Catholic retreat centre in Tosari. A few missed the turn off to the retreat and it was pretty tough to cycle back up such that a motorcycle was sent to rescue them. This retreat had 3 bedrooms and could swallow our group comfortably. The views offered here was second to none and we really appreciated the spacious living area and hot water showers. 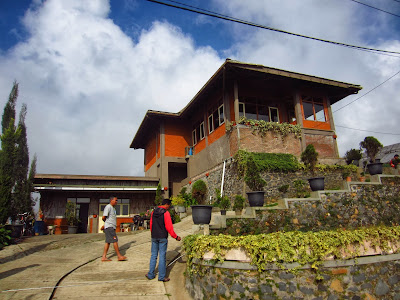 I was mesomerised by the beautiful scenery outside my bedroom window and just stared at the splendor for a while. The cool air, quiet and sense of serenity made this truly a perfect place for spiritual reflection and meditation. 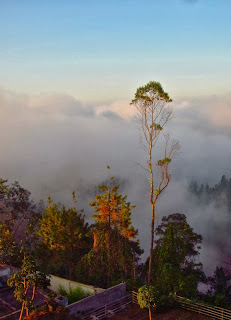 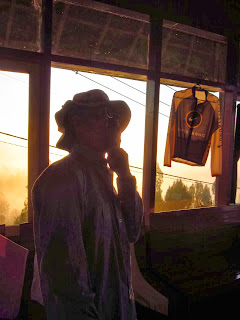 As we made our way for dinner by foot, the amazing sunset stopped us in our tracks. Words cannot do justice to capture what we saw so I will let this picture, that is worth a thousand words, do the talking. 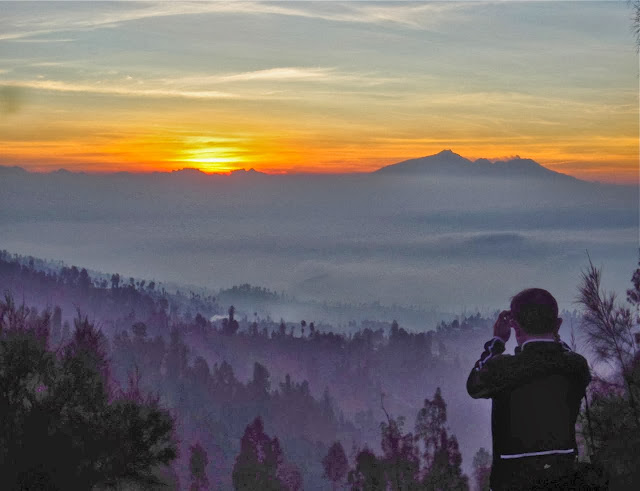 We went to the best cafe in town, Warung Fatimah and ordered like there was no tomorrow. This place is highly recommended and well stashed with lots of drinks. The food too was not bad for this remote part of Bromo but obviously, it didn't meet the standards for some of us. 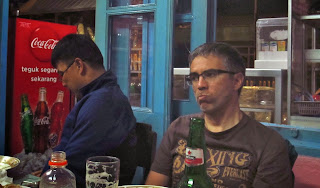 Meanwhile back at the retreat, the nice care taker put together a beautiful flower arrangement to welcome us with flowers carefully selected from its lush gardens. 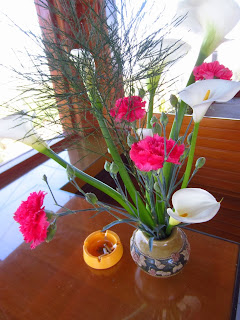 Such nice hospitality really makes all the difference and we certainly felt very welcome here. We spend the rest of the evening glued to our smart phones and sharing our rations together feeling rather pleased at how the day has turned out. In moments such as these, it is always good to give thanks to Him whose goodness and grace to us knows no bounds. We all slept with gladness in our hearts. 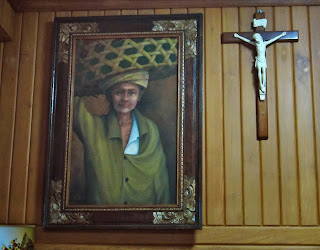 Posted by Oldyonfoldy at 9:47 AM

What an experience! And that was really nice of u to remember a friend. :) You da man!

Who is the cutie pie next to the flowers ? Never seen her before, is she from Tosari ??

She seems to be everywhere! :)