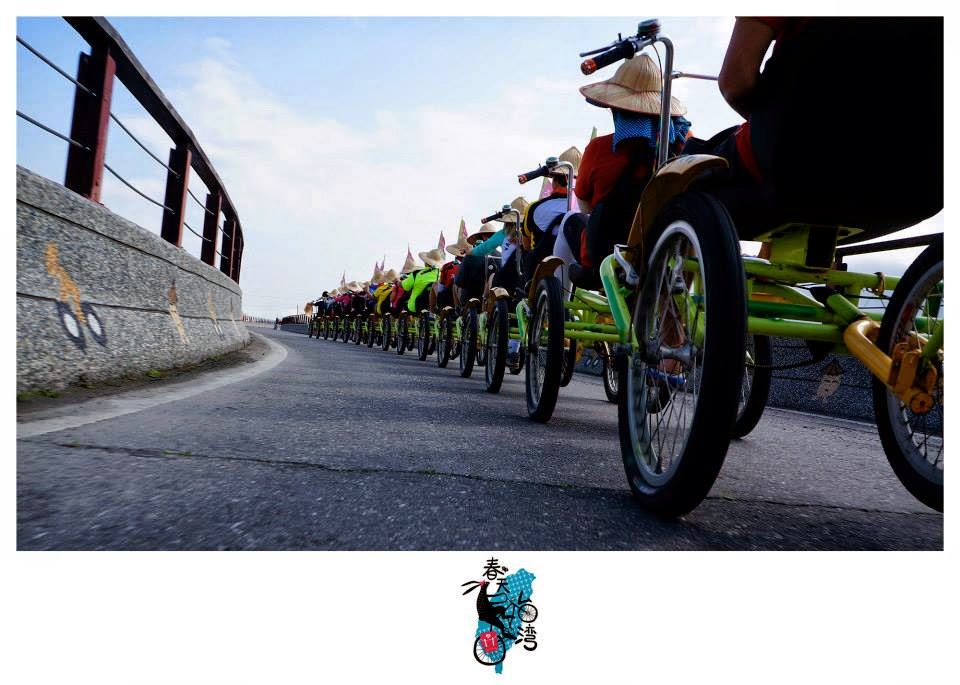 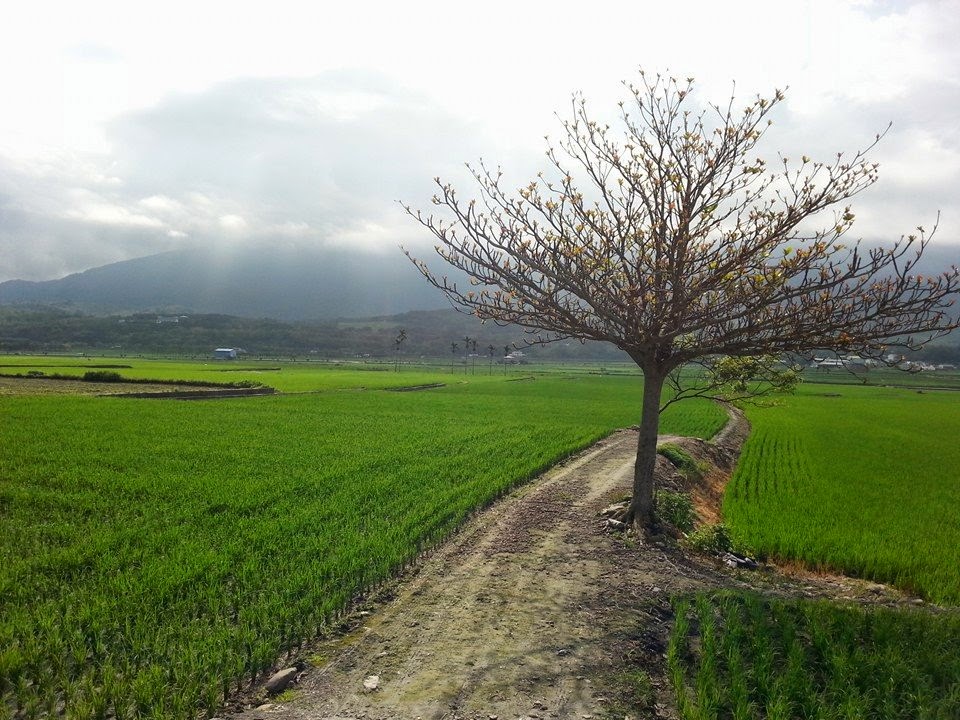 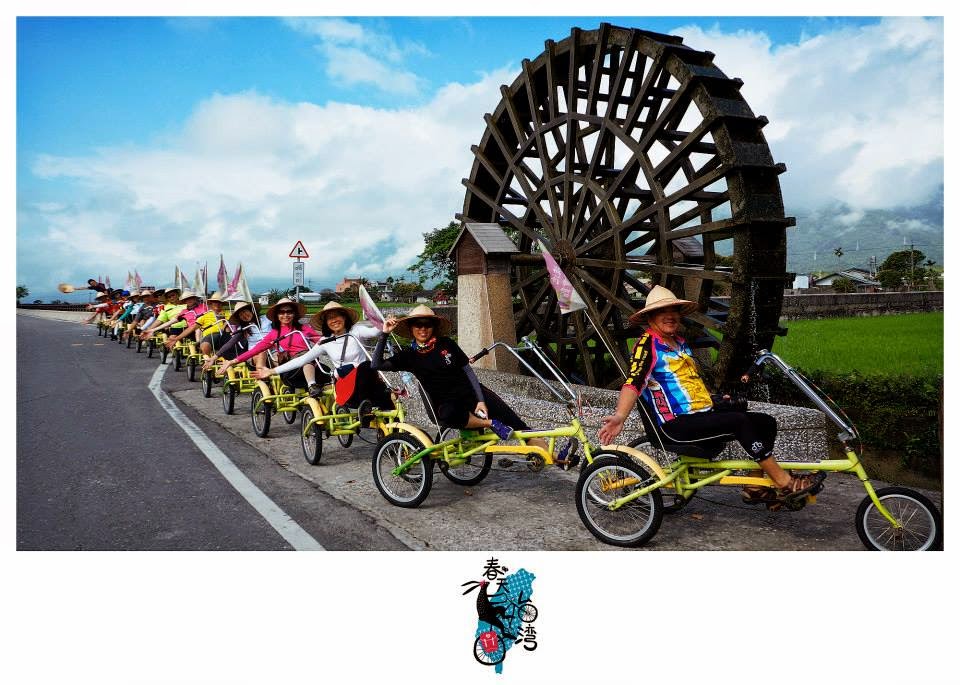 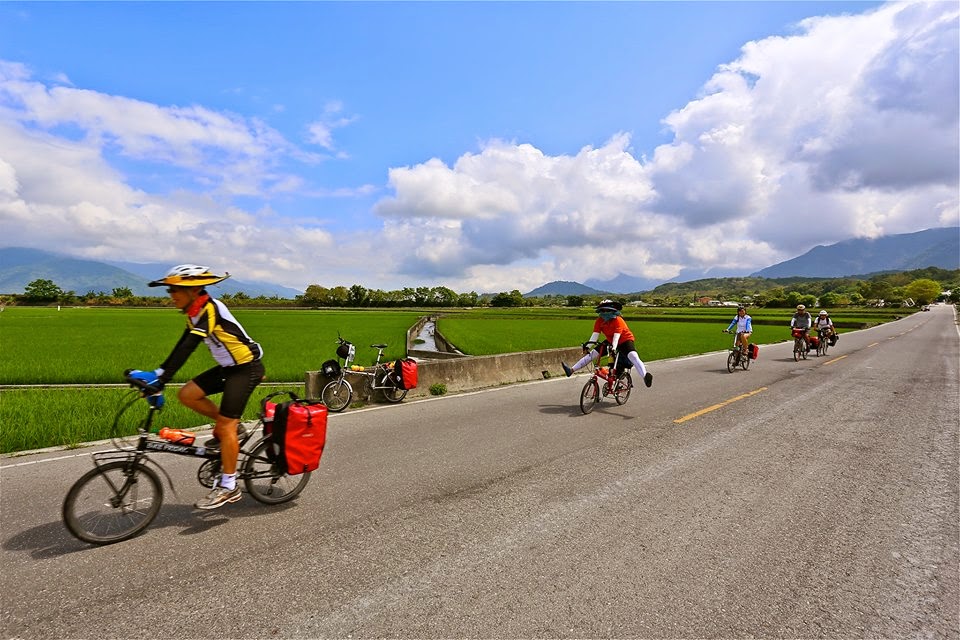 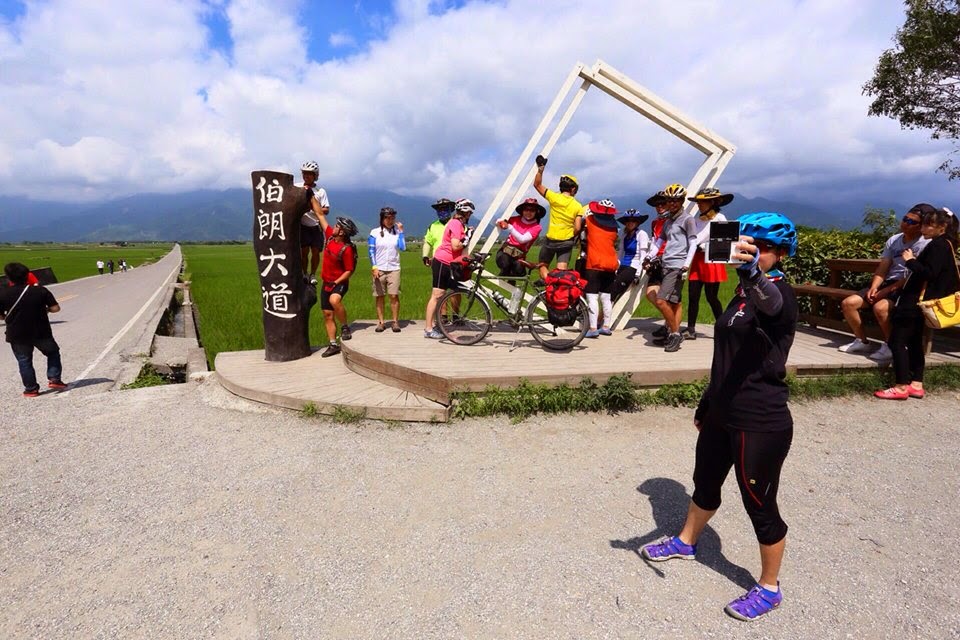 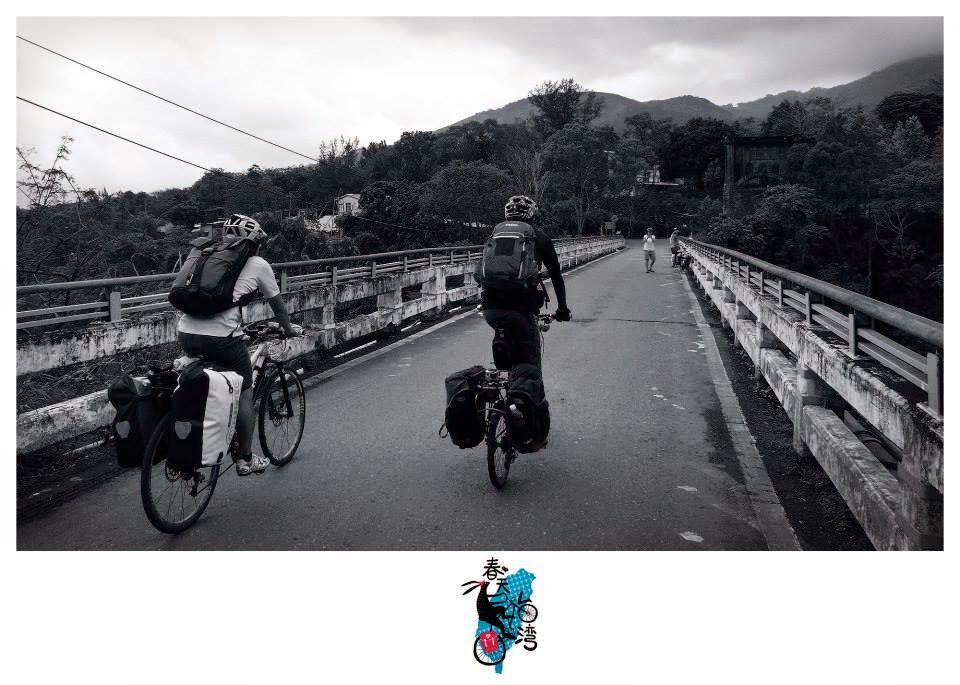 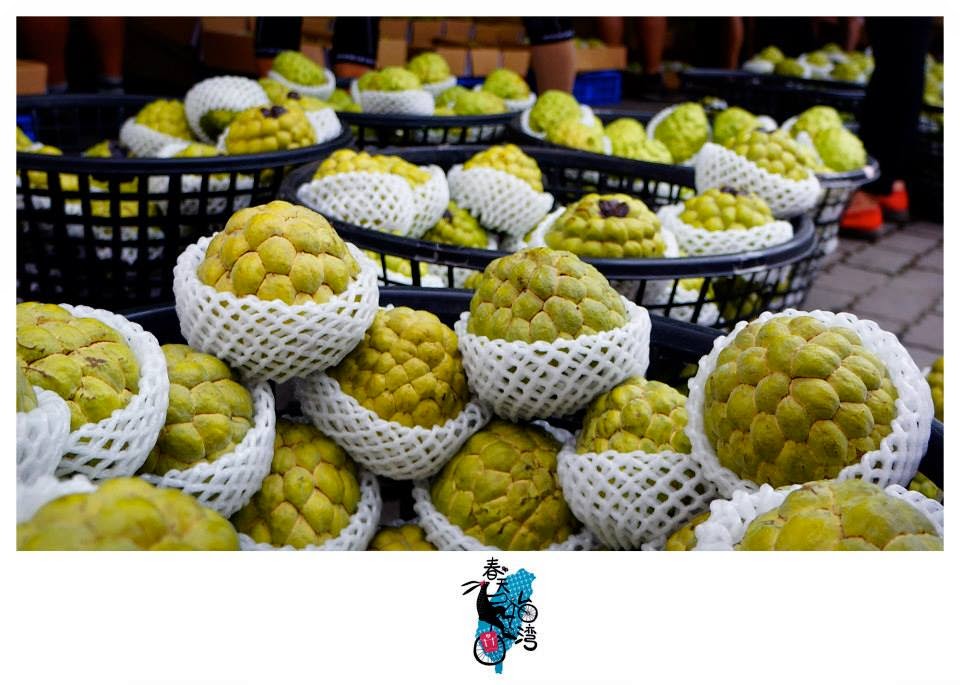 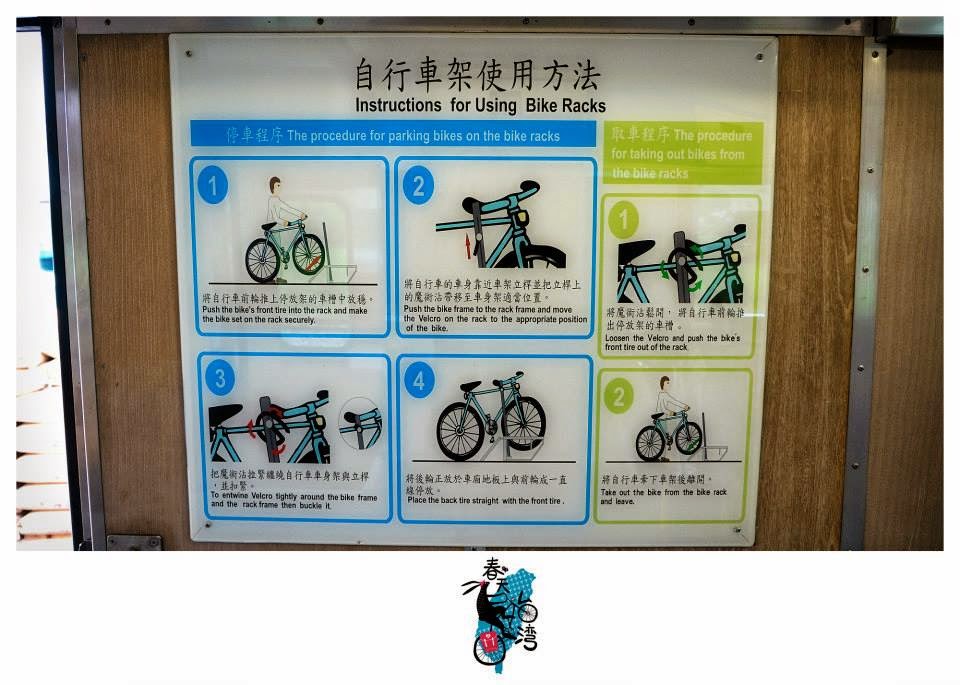 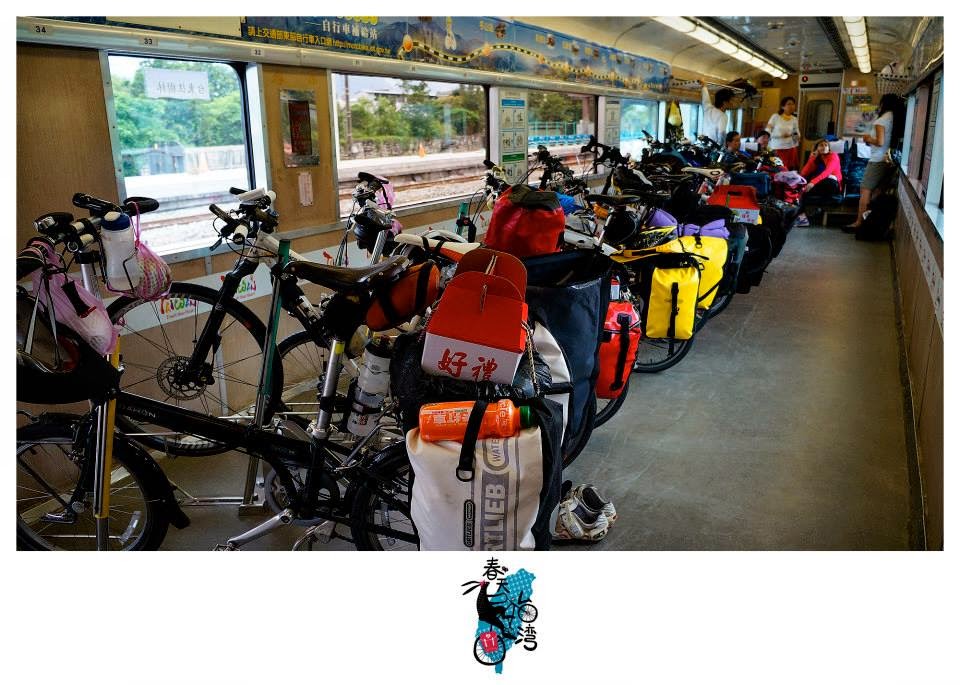 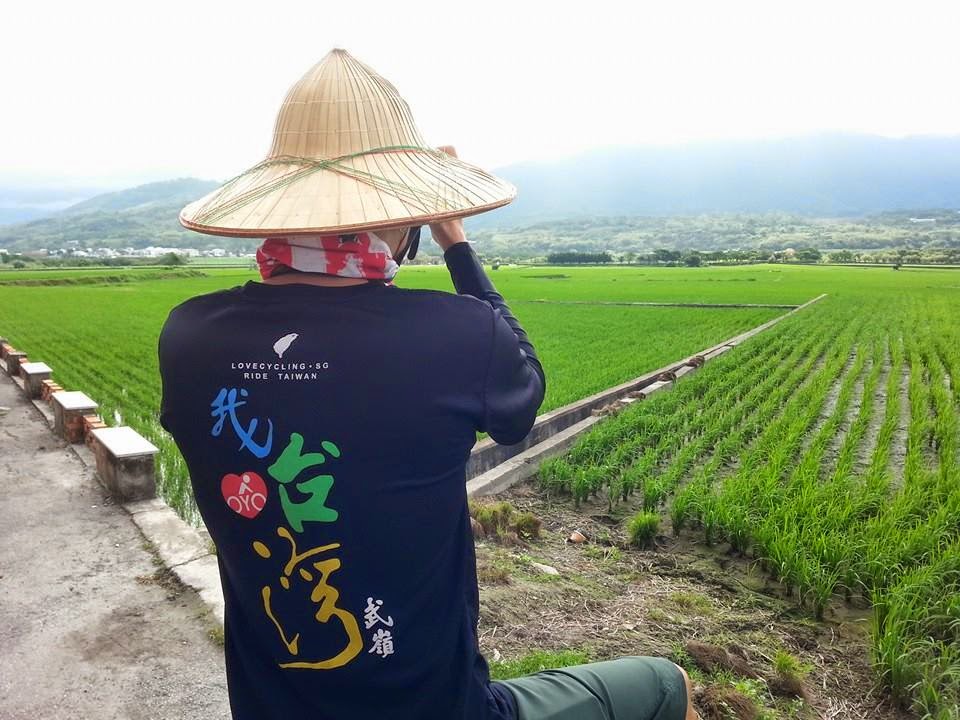 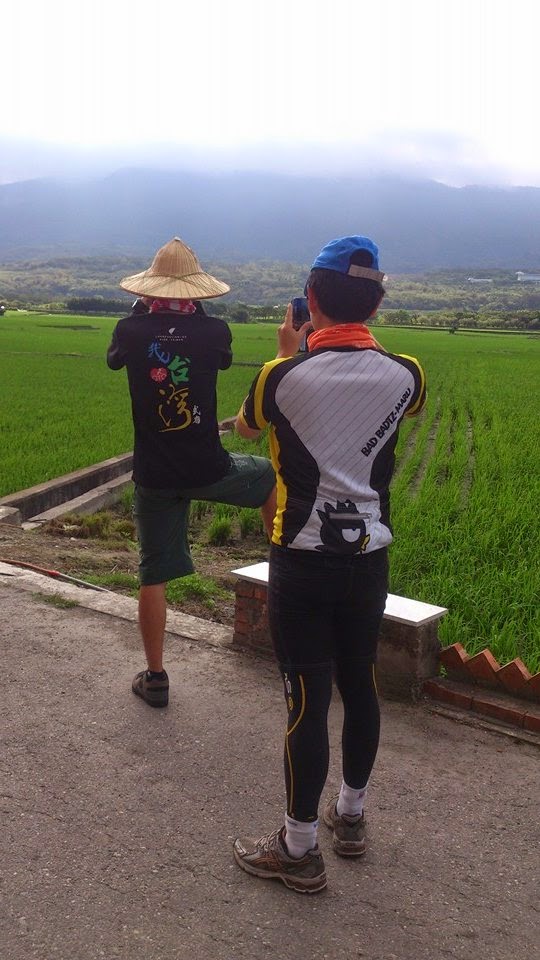 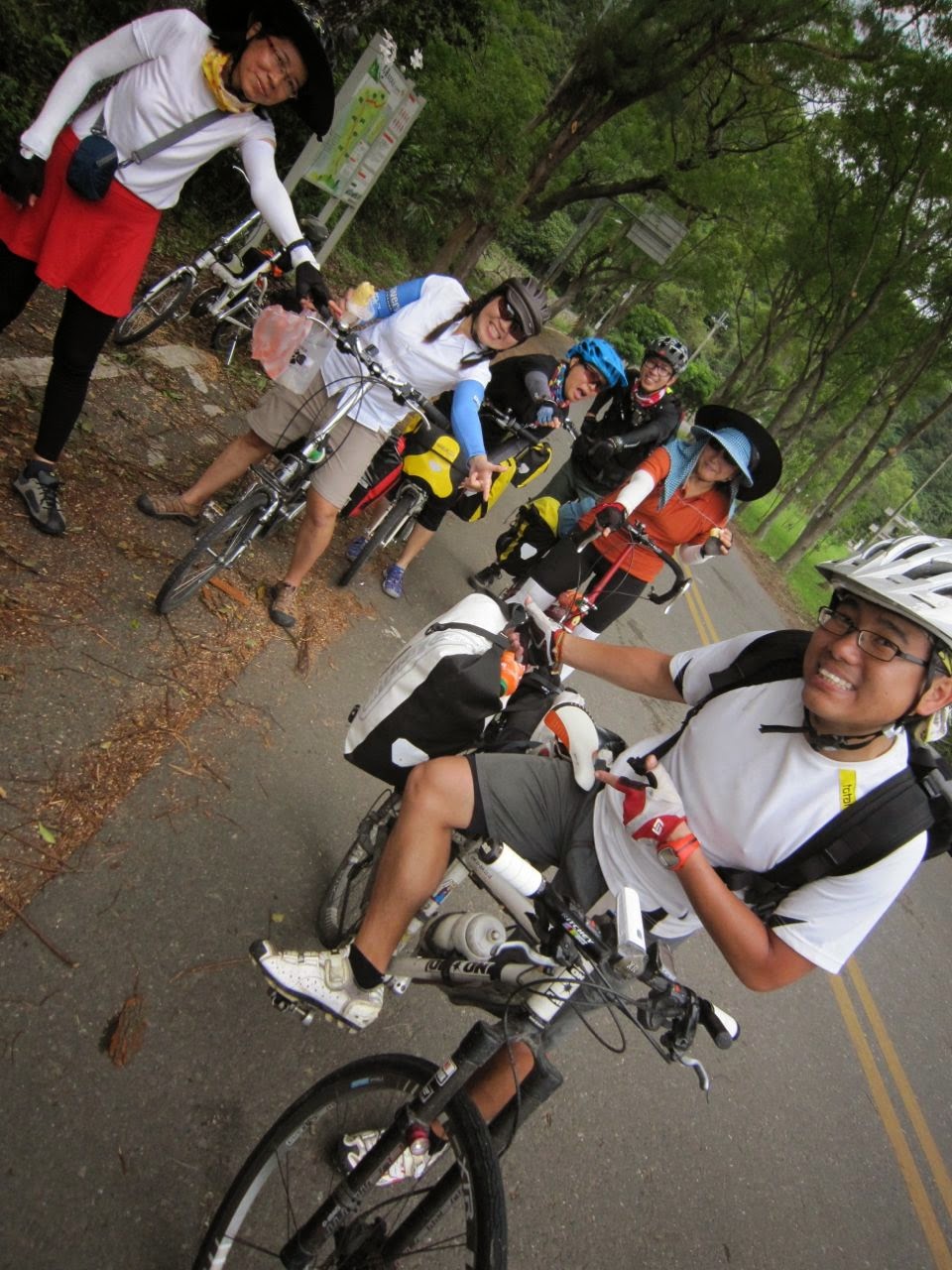 It's usually not my thing to enjoy breakfast with hordes of Chinese senior citizens all talking loudly and slurping nosily in the same restaurant but this morning somehow was delightfully different. The Taiwanese seniors were very sweet, friendly and inquisitive about us "youngsters" all dressed up in tight, colourful attire. I found out in my limited Mandarin that they were on a conducted tour of Taiwan and I was very glad to see them having a whale of a time. Once again, eating Taiwanese porridge for breakfast was absolutely delicious and I felt sad gobbling it down as this was our last day of riding.

The plan was to cycle 55km from Chishang to Guanshan and catch the 330pm train at Taitung all the way back to Taipei. But first, we had to have a special warm up session with none other than the famous Choo Choo cycle train. This is what the Dapochi Hotel is renown for. Basically, this is a special tri-cycle that can hook up together to form as long a train as possible. The Senior Citizens have the advantage of having an "ëngine" that pulled them around the beautiful cycle circuits but for us youngsters, there was no such thing. The hotel staff divided us into 3 groups and with our rice farmer hats all donned up, we soon were pedalling furiously, tearing down the bike paths at a paltry 15km/h! Boy, they were so heavy. 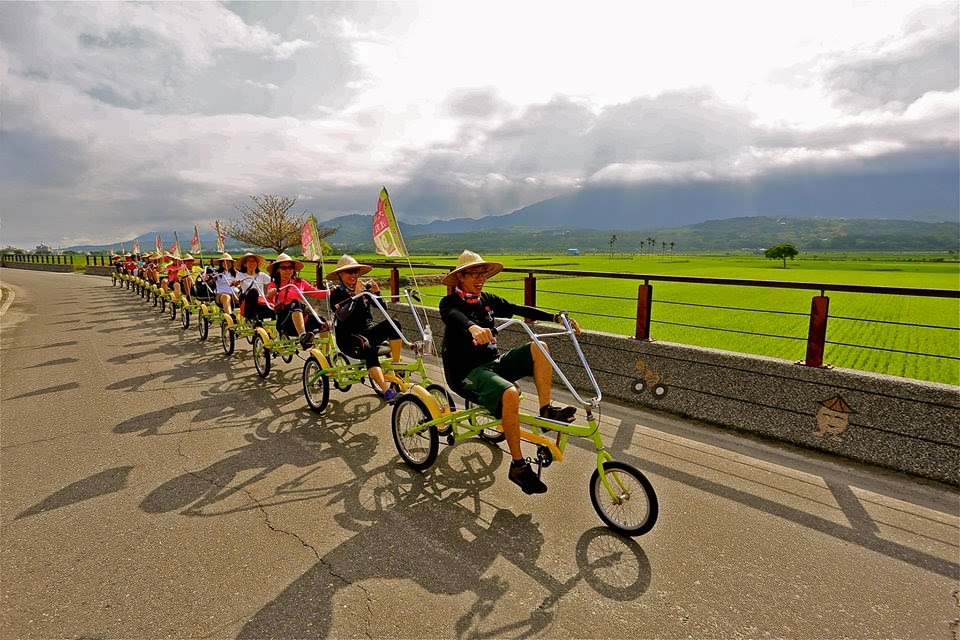 We soon figured that if we were to join all 16 tri-cycles together, we had one long road train and that would be real fun. Of course we made sure we did this far away from the hotel as they would not have approved of such a long train. However, with some folks cycling and some goofing off taking pictures and what not, our train was really crawling. Which is a practical lesson in communism actually - why it does not work. After all, why pedal when there is someone else who is doing the pedalling? You still get the same reward... So those who pedalled eventually gave up as it was too difficult and the whole train just stopped!!! Here is what I mean...  :) 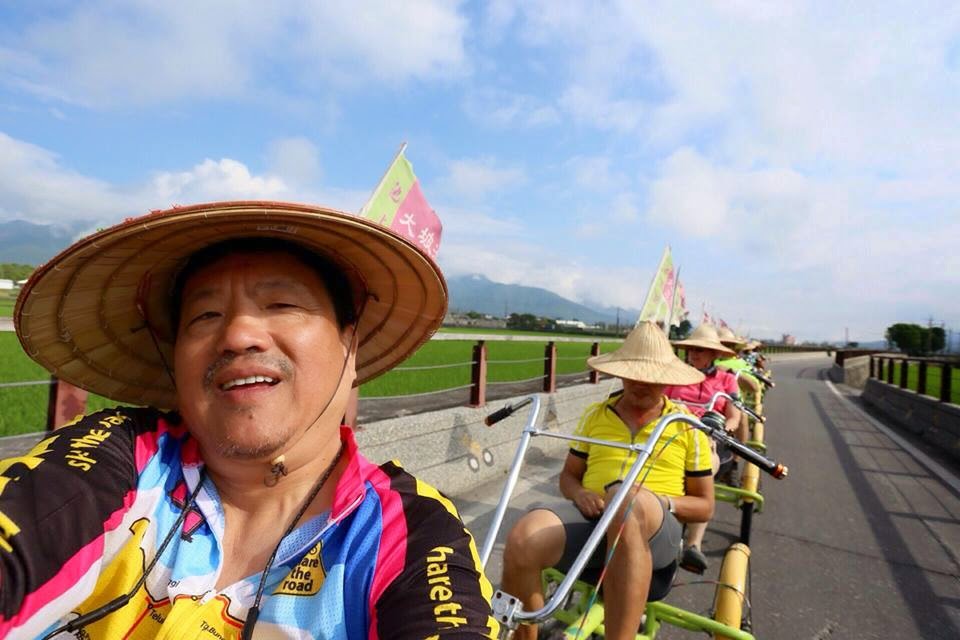 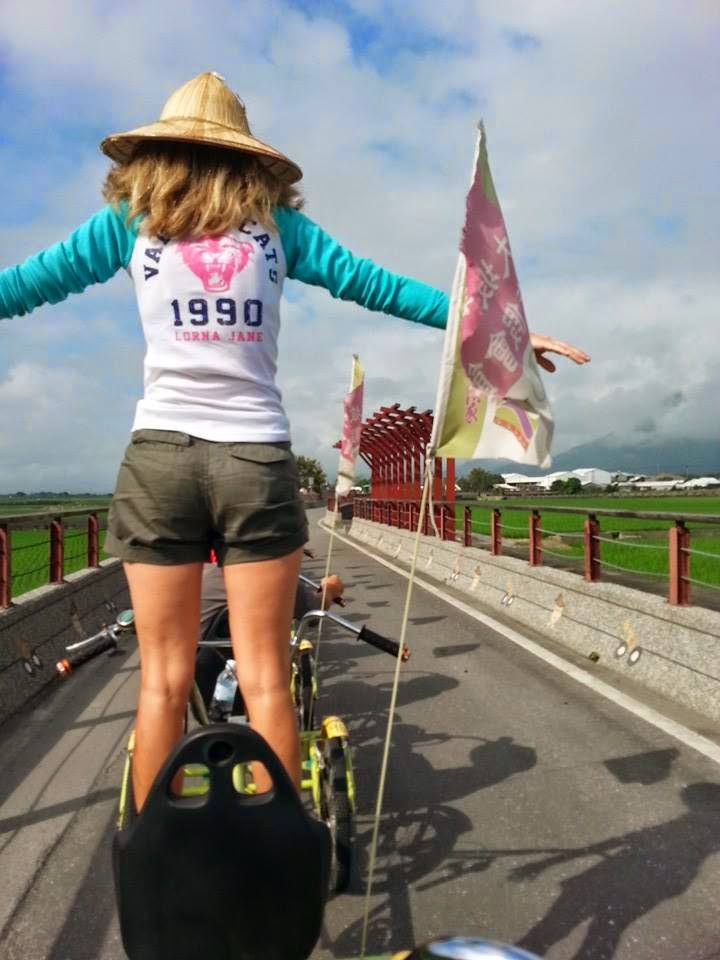 As the morning was getting on, it was soon time to hop on our real bikes and ride south towards Taitung. After slogging on the choo choo cycle, our foldies felt like fighter jets, nimble and fast even with fully loaded panniers. As we rode through the lovely green rice fields, our destination is the famous spot where there is a huge picture frame a short ride away. It was pretty crowded with other tourists but we soon got our chance to take the obligatory group photo. Esther of course managed to get all of us on a selfie and that was incredible. I was pleased to have a nice framed portrait of myself too. 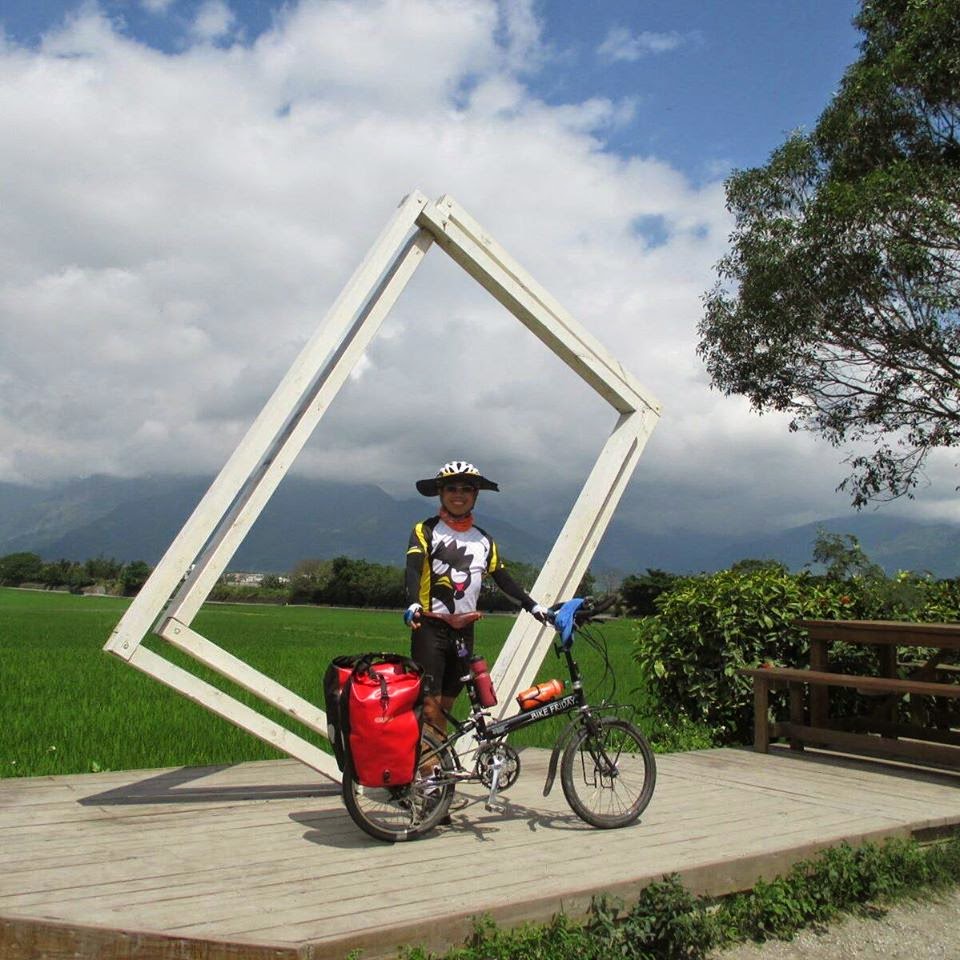 This particular road just after the Frame is perhaps the most beautiful road for photography as it is straight as an arrow, surrounded both sides by rice paddies and right in front are mountains. Many commercials were shot here and I felt very privileged to be riding on this famous Mr Brown Ave. 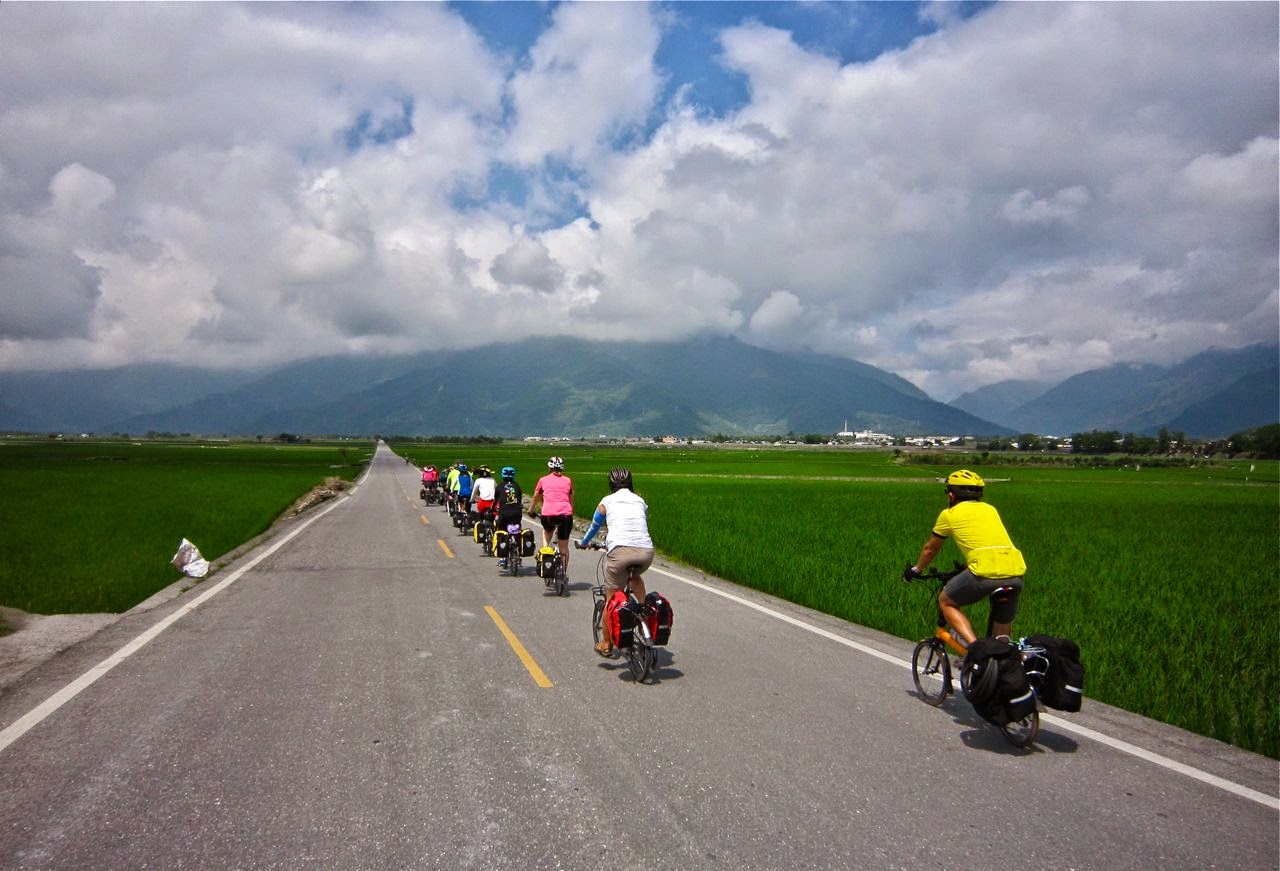 Riding out of Chishang, the roads soon became less scenic and the hills started appearing. We were leaving dreamland and facing touring reality once again as we headed south on Highway 9. Still, we savored every kilometer as we knew that the long ride was soon coming to an end. We did a pit stop at Guanshan at our favorite 7/11 to fuel up and that was really appreciated by all. 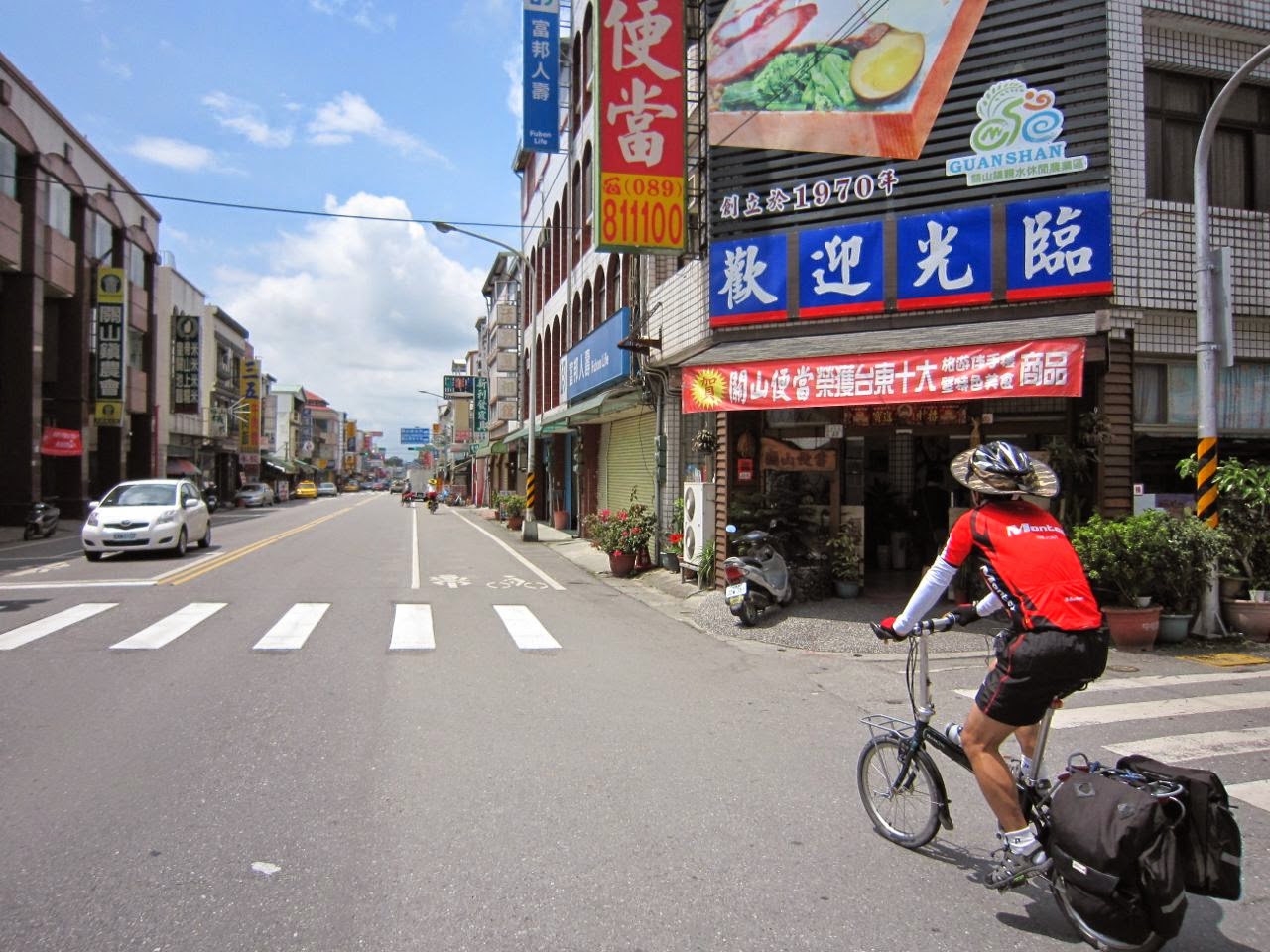 To make things interesting, YC had a very nice detour planned for us so that instead of waiting for the slower riders, we could take this scenic 3km detour and rejoin the gang at the highway. This is an old section of Highway 9 and is a lovely side road into the woods, passing the Taitung Drug Rehab Centre along the Wulin Green Belt. It is traffic free and it was fun crossing a scenic bridge. I had a blast just cruising along at a fast pace with Carolen and Chor Kooi on our foldies.

What goes down must go up and as we rejoin the highway, it was a gradual climb. Only 30km to Taitung! What is intriguing were the many signs informing the cyclists how many calories were burnt off and that was supposed to serve as a motivator as we cranked our way up slowly. At this stage, some newbies were really feeling worn out but with constant encouragement, everyone got up those hills. 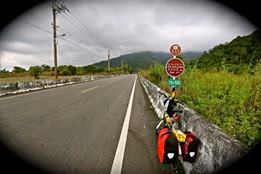 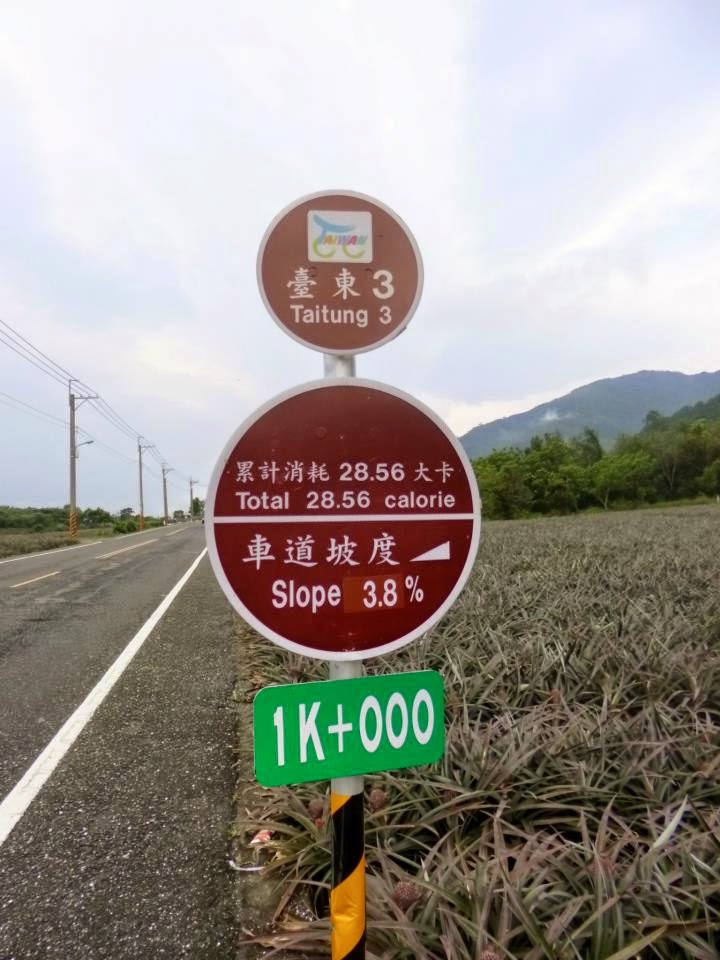 The reward was a beautiful long downhill towards the Luye River and we had a blast spinning our small wheels at top speed. As we approach Taitung outskirts, I was drafting KL Mike and Carolen. Mike was really flying at 45-50km/h and we were covering ground like that was no tomorrow! We went so fast that we forgot to stop for Custard Apples unlike the rest who did. It was providence that when we stopped at the Family Mart to regroup, there were a couple of Custard Apple shops and we bought heaps and got them delivered to Taipei. 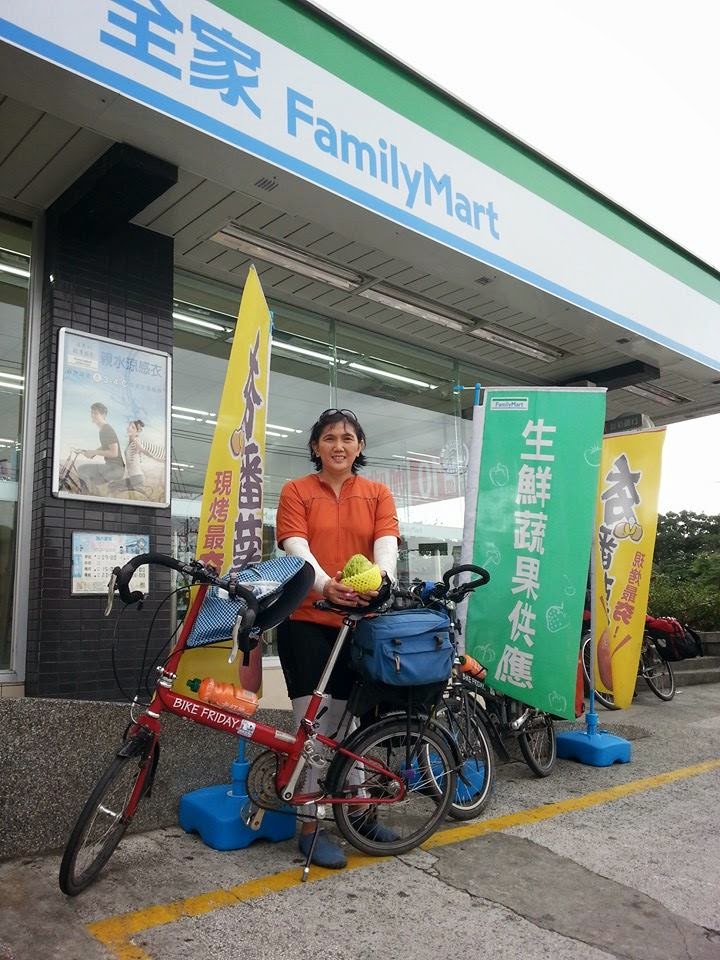 It was fortunate that one of the vendors looked rather familiar so we felt very comfortable buying from him. He showed us the best ones and we were very pleased with our purchase. 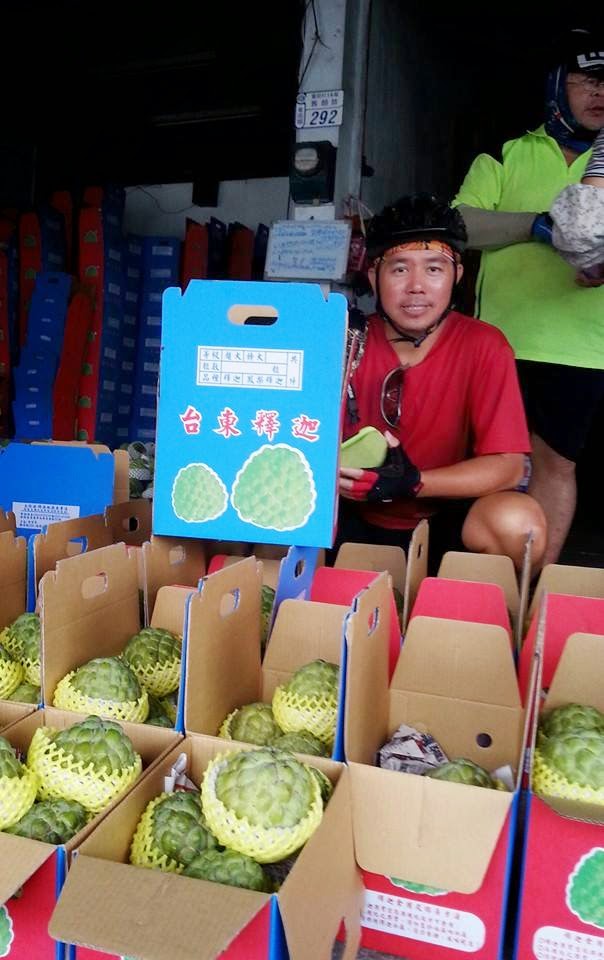 Lunch was at a simple local eatery and the poor seller was running out of food with 16 of us hungry cyclists swarming around. Roland was kind enough to sacrifice the last bowl of Lu Rou Fan (braised pork rice) to me which was my favorite. I really appreciated that so much and many a times, Roland and May extended such kindness to us all. 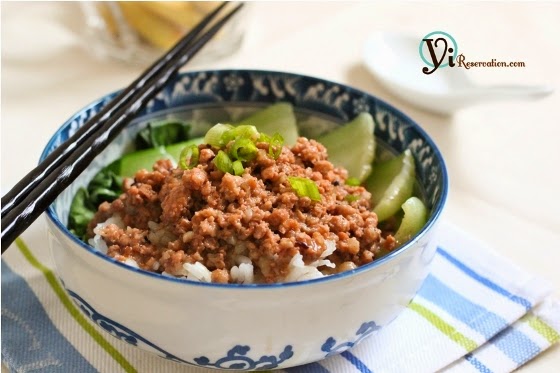 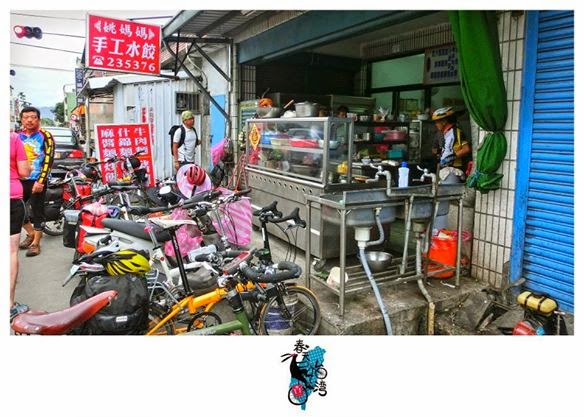 Our timing was clockwork and we made it to the Taitung Train Station with 30 mins to spare. It was great to have all our tickets sorted out early and this was to be a long 5 hour train journey. After all, we will be boarding nearly at the southern tip of Taiwan Island and would make our way all the way north. As usual, a group selfie was in order! 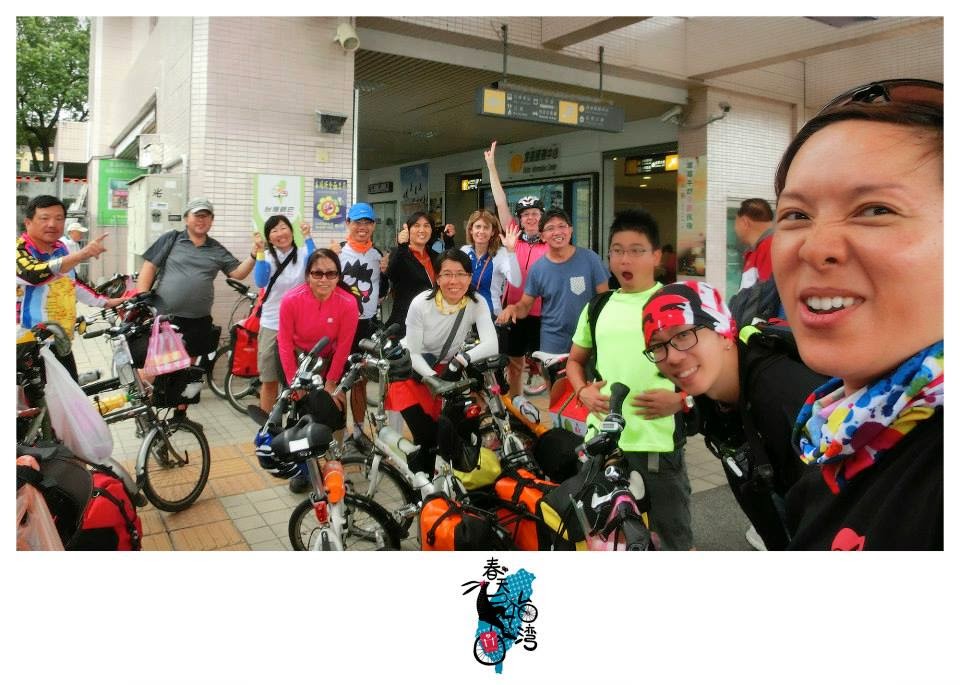 It was amazing to know that we actually made it! A great sense of satisfaction and accomplishment filled our hearts. We owed it to Ying Chang who put so much thought and planning for every detail of this trip, and to everyone for their contribution big or small.

As we boarded the train, we were booked in a special compartment where half of it was solely dedicated to bicycles and the rest for passengers. This is another shining example of how bicycle friendly Taiwan is. 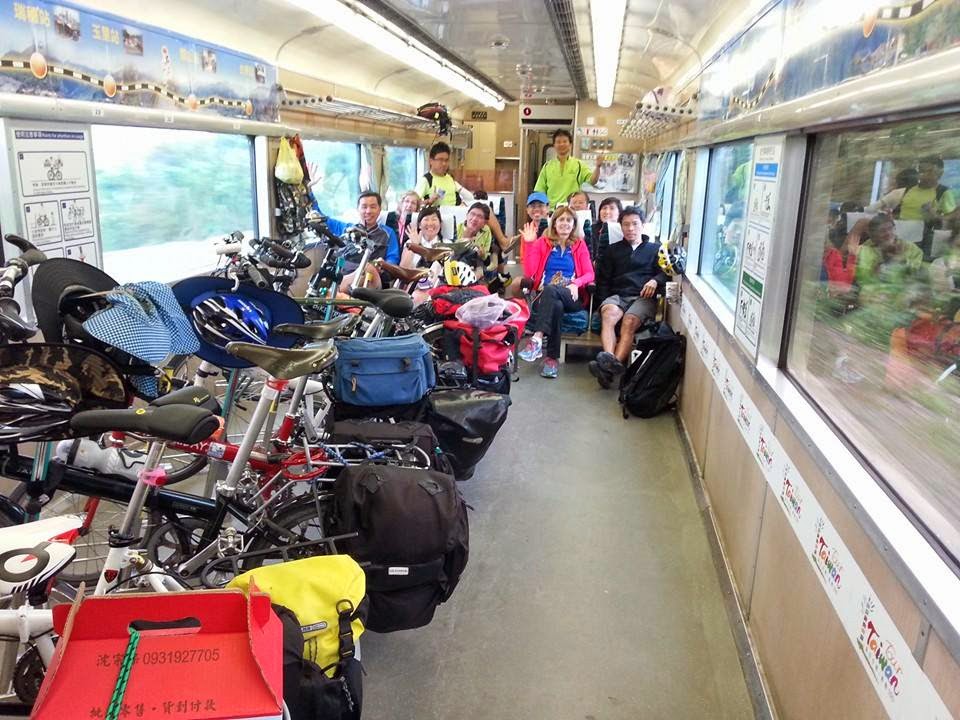 Although we were all visibly happy, in our hearts we were somehow sad that this great ride has come to an end. The last week has been like a dream and how I wish we do not need to wake up from this beautiful dream on our foldies together!

Our hearts have indeed been touched by Taiwan... 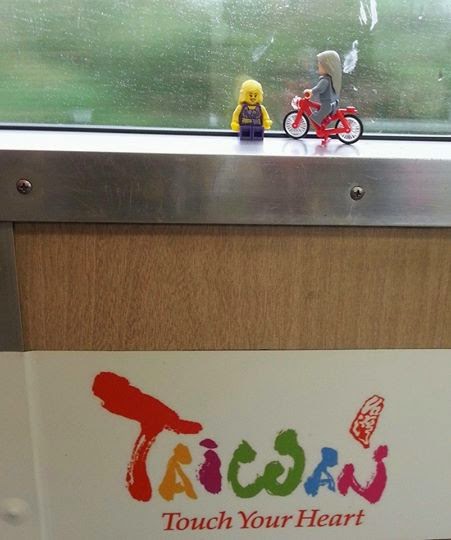 And not forgetting Doreen, Wayne and Mark!

Posted by Oldyonfoldy at 8:27 AM