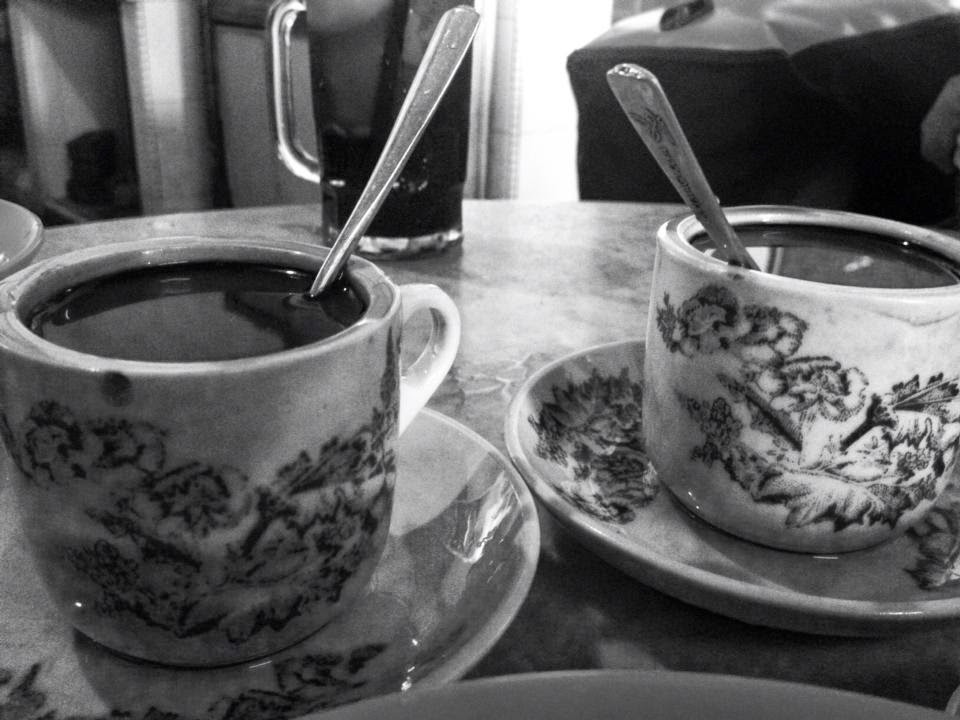 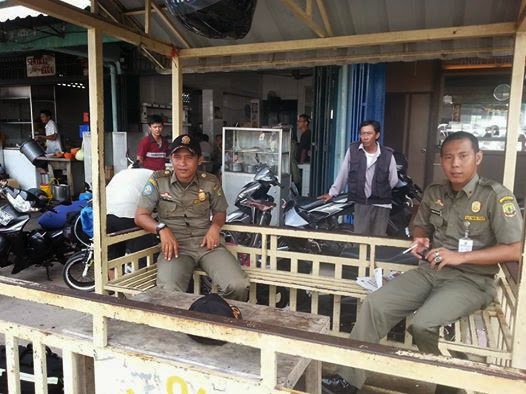 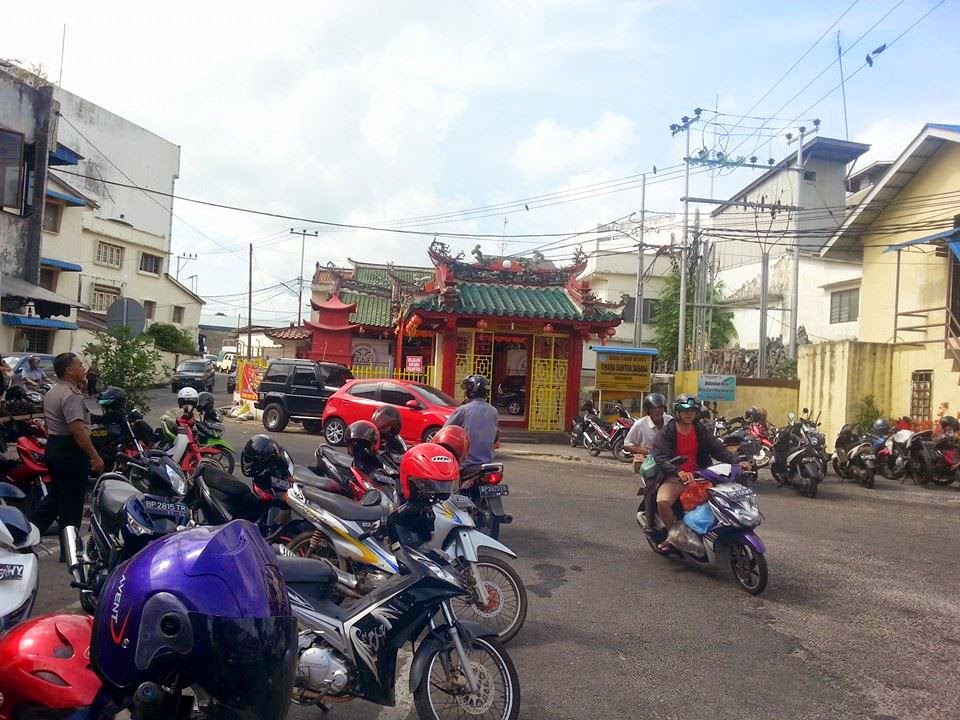 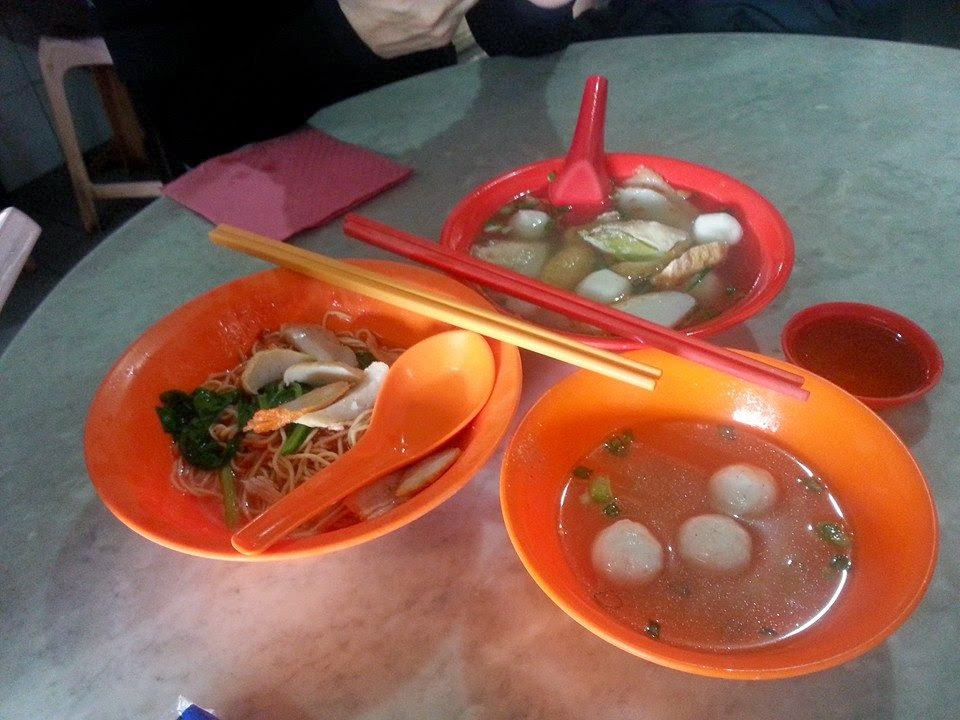 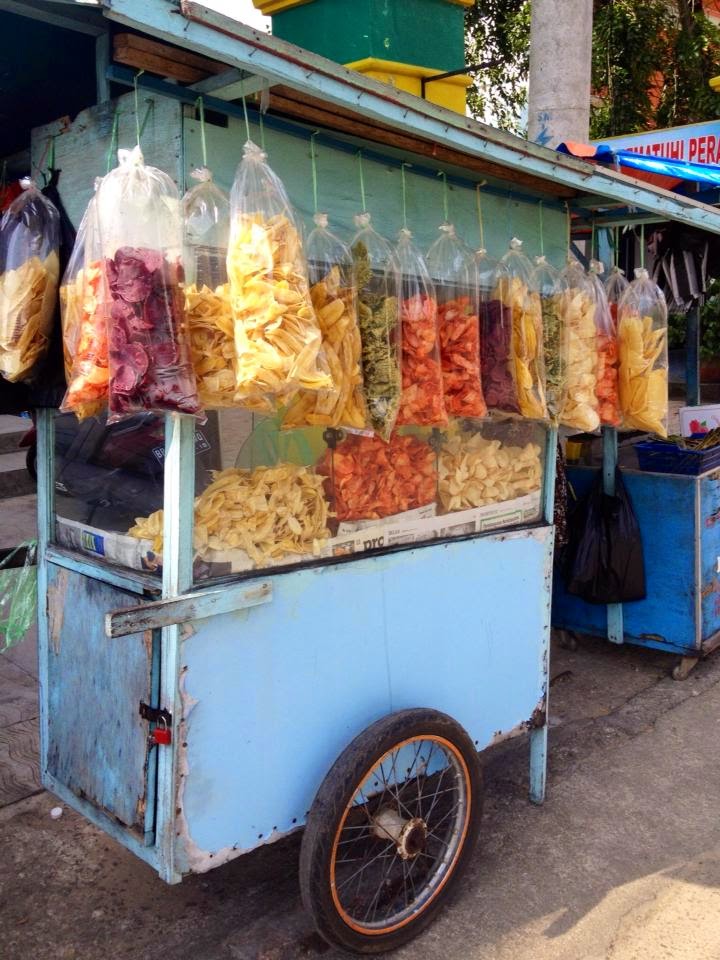 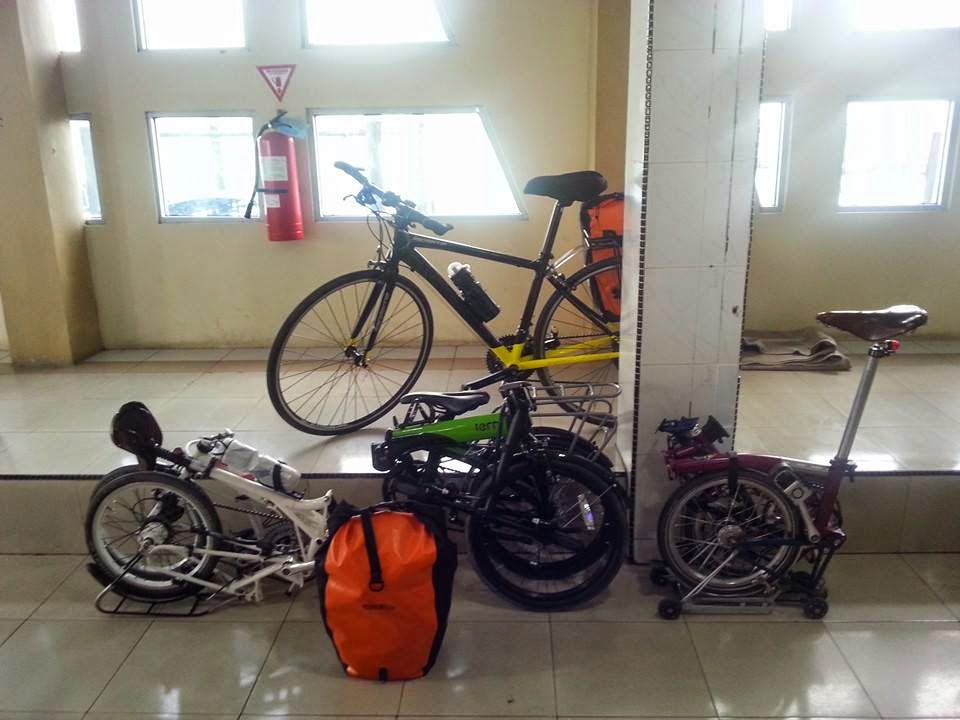 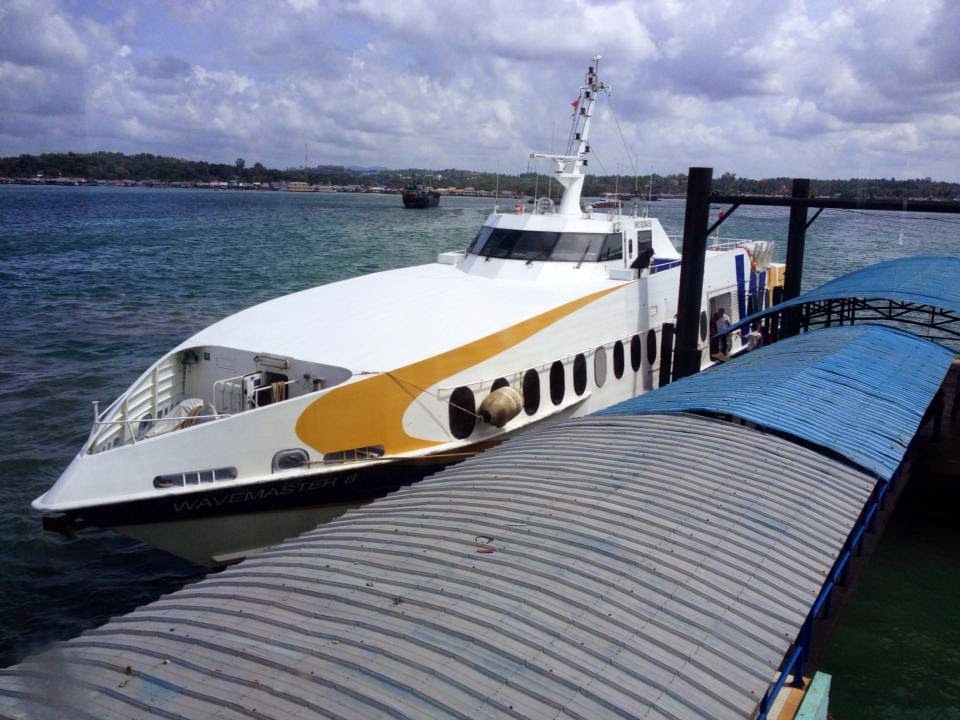 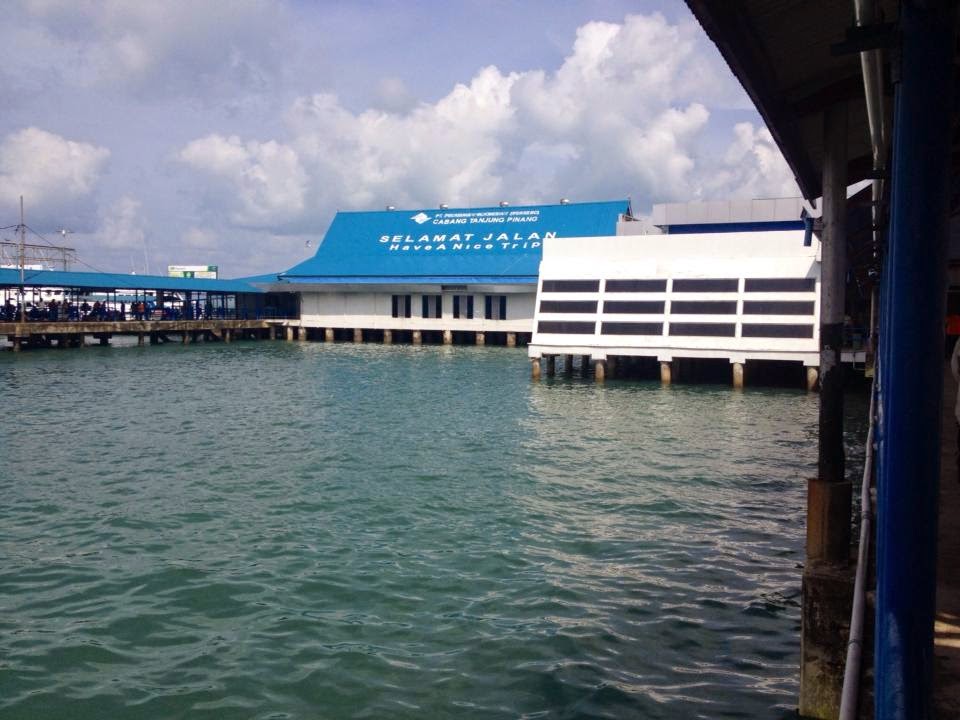 It is always sad when a tour comes to an end. Our B2B is no different. I enjoyed discovering unfamiliar places in Bintan despite being there a few times, and making new acquaintances in VT and Claudine. Thank you Berenda, Judith and YC for making this another very special Lovethefold Adventure! 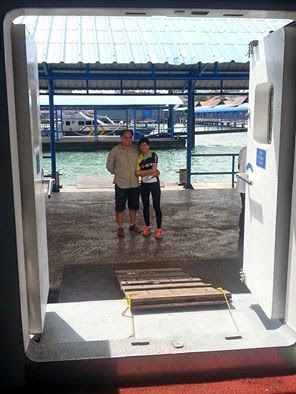 My grateful thanks to my guest blogger for allowing me to share her blog post on LTF. It provides an alternate and synoptic account of the trip and I find it so refreshing. Hope you think so too. I have learned that her passion for food extends to her culinary skills, and this truly is one of the great joys of touring - making wonderful new friends.

Im grateful too for old friends like Uncle KC who kindly welcomed us at Tanah Merah Ferry Terminal, Singapore when we arrived.


Till we ride again, God bless all of you!


Day 4 - Home Sweet Home!
Their biological clock tuned to early rises for the past few days, Claudine and VT again woke up early. By 7.30 am they were at the dining area checking out the free breakfast. Bare breakfast spread of bread slices with some jam spreads, fried noodle and fried rice.
The group were meant to meet for breakfast at 8.30 am. Ferry home was 10.30 am and they were told to get to the terminal one hour before.
VT and Claudine decided to scour the town for food. Same way to Chinatown. Monday was a working day and the whole town was up and about. Familiar ground, they went back to the Char Kueh Teow shop. The Char Kueh Teow was closed. Instead in the shop was a skinny old man selling Yong Tofu. All the tables were taken.

A friendly old man standing outside pointed to other food options down the street. Claudine and VT decided to check them out. A shop selling roast pork, a shop selling colourful bread, a stall selling kueh.

A corner shop by the market looked busy with few food stalls inside. This one also sells Yong Tofu. The fish paste was good but the kueh teow that they uses were broad, thick and slightly harder. They also tried wantan mee. The springy noodle was sadly mixed with chilli sambal and tomato sauce. The cheap industrialized sauce adds a "Yuck" to the otherwise good meal. 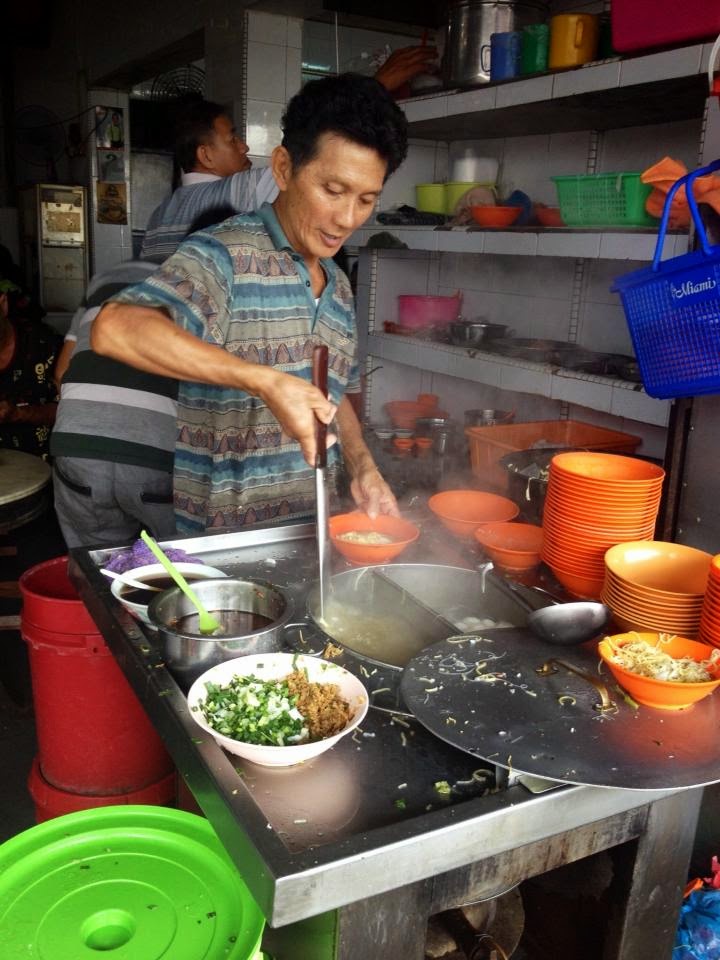 A thing to note about Bintan is most places serves quite good coffee but slightly too sweet.
While waiting for Claudine to finish, VT's radar picked up on a nasi campur seller in the same shop. Knowing he can't down anymore food, he uses the pretext of buying home for Claudine's mum. Rice with sambal, keropok, preboiled then fried egg, tofu, sayur lodeh and salted fishes.
They returned to the hotel just as Judith and Berenda were starting breakfast. VT got a cup of tea. Claudine asked a waitress for milk to go with the tea. The waitress informed her she will have to pay extra for milk.
Alvin came down much later. He tried some food but when he got news of the bustling Char Kueh Teow cum Yong Tofu stall, he decided to ditch his meal.
Everyone checked out. We went to the said shop. Sadly, good food does not wait for people. As we parked, the shop owner informed us they were sold out. At 9 am in the morning!!!!!
It was Yong Tofu and wantan mee again. VT bought some onde-onde and some kueh to try. 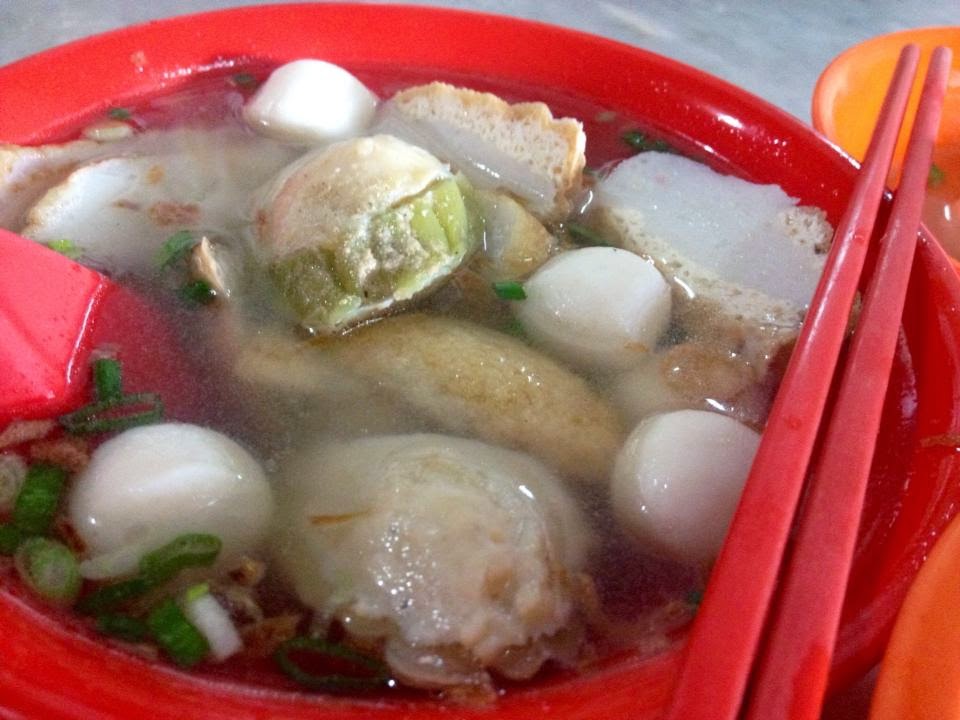 Alvin tried taking the photo of a young waitress with a large zit on her nose. He failed.
Then, it was time to leave for the Ferry terminal. Here, the porter wanted to charge us IDR100,000 to take 5 of our bikes up the ferry. It works up to about SGD2 per bike only.
Somehow, Alvin and Claudine were not feeling charitable that morning. They tried bargaining for half the price. The porter refused. Swallowing their pride, the gang had to carry their bikes themselves through immigration and into the ferry. 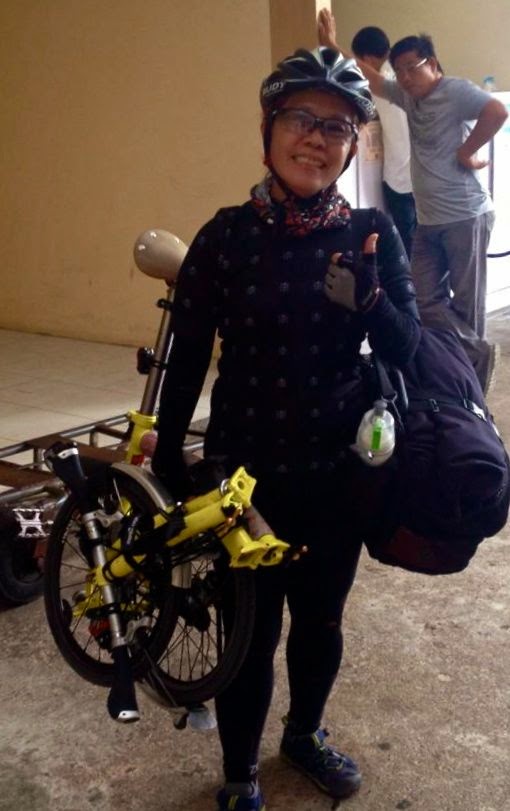 In a way, it did make sense to have the bikes with us. The porters could have been paid by us to steal our bikes had they not been honest people. It was a casual arrangement with no baggage tags issued!
Waiting at the terminal, we saw "James Dean", with sleek shiny hair combed back, clicking at his typewriter. They are still using typewriter for documentations. Only in Tanjung Pinang! 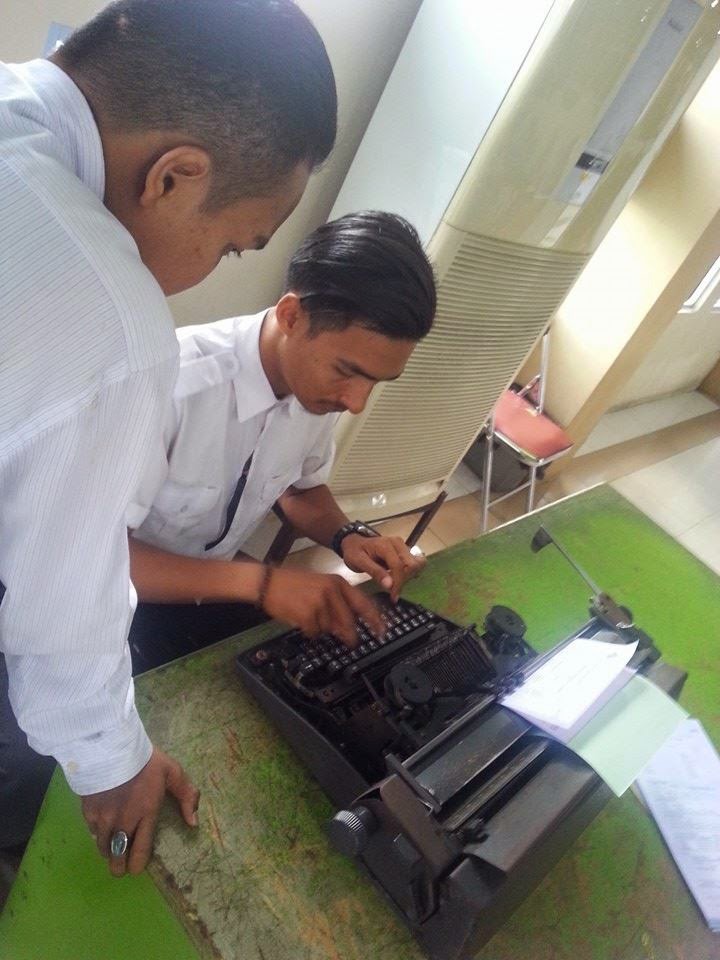 The ferry ride home was quiet. Claudine and VT slept through half the journey. Judith was caught taking a selfie. 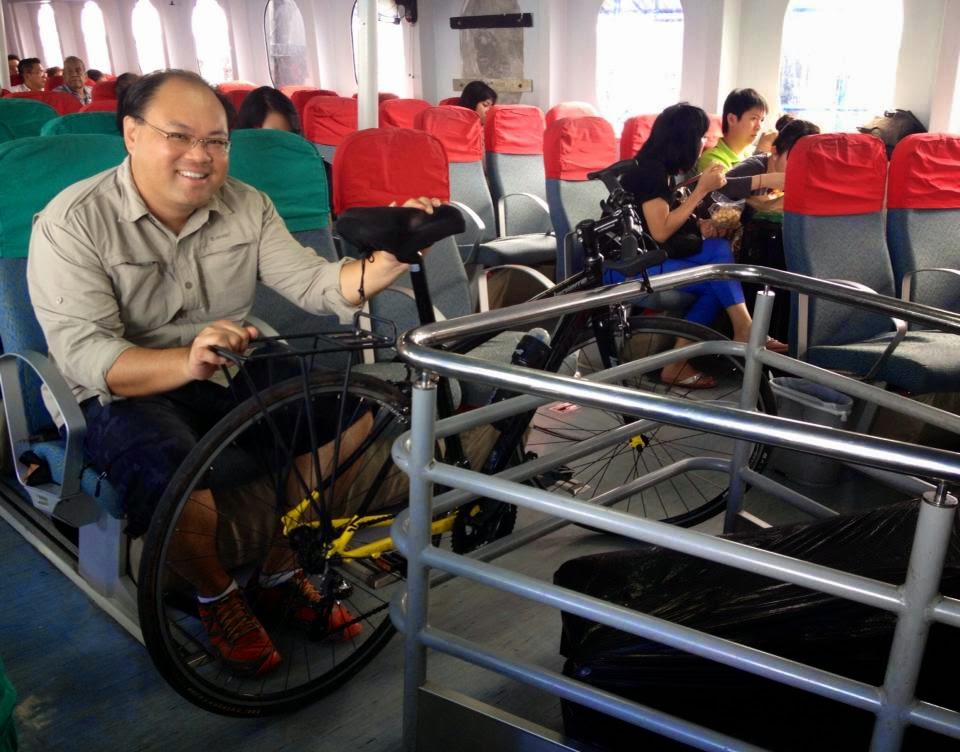 Tanah Merah Ferry Terminal has a special immigration lane for bicycles. We were the last to disembark but we cut so many queues!
And just at arrival hall, the Legend greeted us! Uncle KC!!! Claudine has heard so much about him from the team. He had a lunch date with the rest while Claudine and VT rushed home to reality!
Now what????
Having had so much street food, Claudine and VT thinks it is time to take Zentel, anti-worm medication !!! 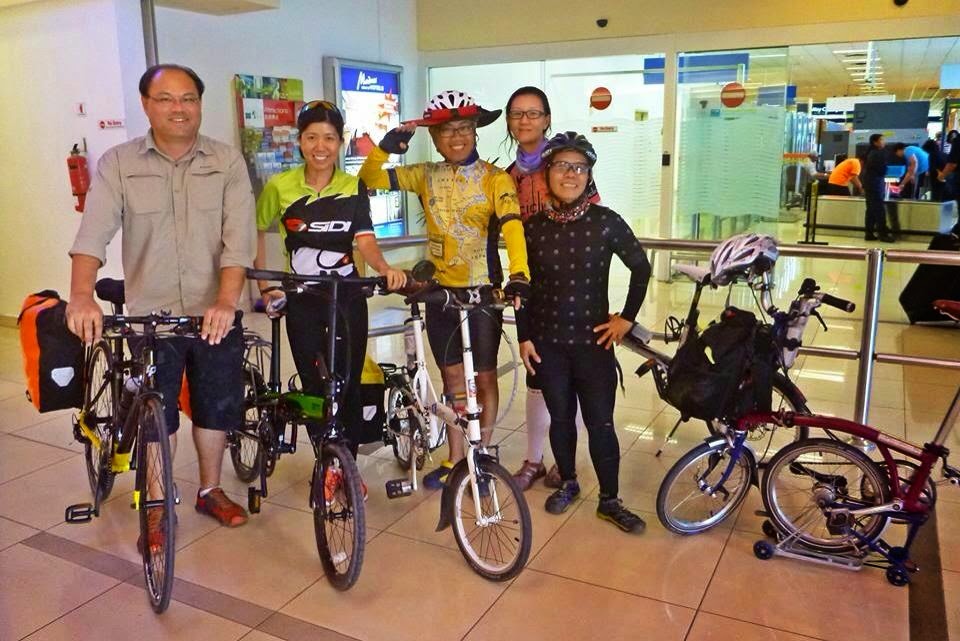