We woke up excitedly and at 0730, everyone was busy getting their gear and bikes ready to go outside our hotel. The key to climbing is lightness and less is best. However for those who don't like the cold, it can sometimes get chilly up at Frasers, falling down to 16c so therein lies the challenge of balance. The hamlet of KKB was quiet and peaceful, even dead on a Thursday morning. KC went around on his foldie trying to wake up anybody, anything...

We were recommended to go opposite the Post Office for breakkie and that too was pretty dead save for a few stalls. But we managed to order some wanton mee, coffee and for me, a Pau for added energy and off we went.

I was fascinated by the number of really old cars still running around in KKB and one 1980 Datsun 120Y was parked where we ate. It is still running despite it's scrap yard look!

We packed with us some peanut better biscuits, a small milo drink, some chocs and one filled up water bottle. No dramas expected and I was cycling with some very accomplished mid-life tourers who have toured the world and more. For some, it almost tinged on boredom! After committing the day to the good Lord, we set off with grateful joy.

The road out of KKB was pleasant enough, shady, light traffic and still sufficiently cool at 0830. The climb was gradual and we began in the highest spirits. It was more like a touristy ride for us as we joked and laughed our way up.

After about 5km, the shade disappeared and the sight of the dam came before us. The road was beautifully new and tarred, a 1000cc superbike paradise! Unfortunately, we were squirreling at a 10km/h pace but what is the rush? The dam is indeed breathtaking and with the different hues of the mountain range in the background, the sight was indeed priceless. KC found an Um-Brim, an upgraded version of the Da Brim and quickly put it to good use.

Just as we were coming out of the dam area, we had an incoming furry with a wagging tail that was only too pleased to see us. George, our resident Doggy Whisperer sprang to action with gift of biscuits and water. Perhaps she knew that George was coming and she really made our day.

The climb continued on with Mike powering right ahead. We gathered again at the Yellow Bridge which span across a peaceful gurgling creek. While others were enjoying the tranquility, I was eaten alive by Commando Mozzies. For some reason, I have a built in DNA that attracts all the mozzies away from my mates and towards me. With a liberal application of repellent, that still did not stop the onslaught and the only way was to vamoose fast, and that I did.

It was lovely to start experiencing the cool air and as we slowly spun our way higher and higher, we were in shady country once again. The thing about climbing is to find your own pace, don't try to follow someone and to spin spin spin.

Besides the great cardio, the other joy of climbs is usually the breathtaking views that appear before the eye. Frasers does not disappoint and I savoured each km as we progressed. The fast riders Mike and KC waited for us at a beautiful waterfall and it is a really good spot for a break, situated at about the half way point. By this time, we had burnt out our breakfast and replenished on our rations.

The cool showers of the waterfall provided instant relief and it was as though this was divinely planned for us. We hung around this beautiful spot too long until a group of noisy tourists came and that was the signal to saddle up.

As we ascended further, we came across a most historical marker. It was here in 1951 that the Communist Party of Malaya had a chance ambush where they assassinated the Governor of Malaya Sir Henry Gurney who was chugging up on his chauffeur driven Rolls Royce. Unfortunately for him, his armoured vehicle broke down and he decided to go up without the necessary escort. That marked the start of a more concerted effort on the Malayan Emergency that eventually ended the war some 20 years later. The Rolls Royce is said to still be in Penang. More about it here. Interesting read! 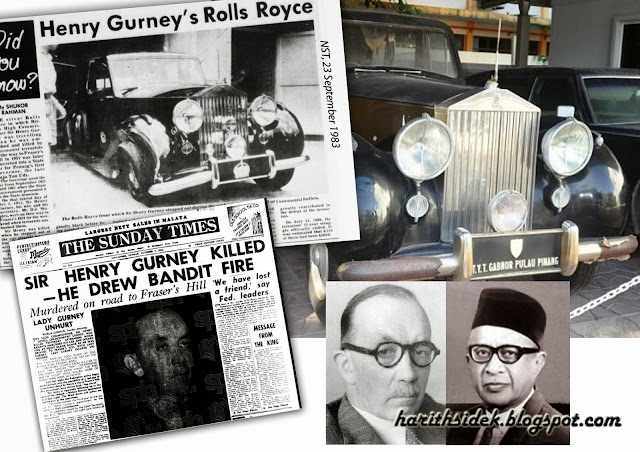 Reaching the Gap, a sort of gathering place where vehicles once queued to go up the 8km to Frasers, I remembered being in my father's car when I was a lad and waiting anxiously for our turn to go up. Sadly, it was heart breaking to see the old colonial rest house at The Gap all rotting away. Ying Chang had stayed here before and truly, it is a magnificent piece of architecture that deserves to be restored.

The 8km climb was like a Phase 2 of the Climb where the gradients were significantly steeper and the roads were old and worn. At this stage, many of us one water bottle heroes were nearly running out of water. We needed more water than anticipated it seems and we were paying the price for being too complacent. But it was not that far so we soldiered on. It was a pity too that my right knee which suffered an injury up Wulin Mountain in Taiwan 3 years ago started acting up too so it was quite excruciating at this stage to say the least. However KC was taking this all in stride, still clowning around and he is the oldest among us. Life certainly is not fair!

It was very kind of Ying Chang our sweeper to keep me company together with George. We enjoyed delightful conversations as we rode up, pedal by pedal. Just 6km into the ride when we were all feeling rather dehydrated, God sent an angel down to us bringing glad tidings of cold drinks and water to us. Angel Mike the mountain goat had went ahead to buy a bottle of isotonic drink aptly called Revive and a much appreciated cold bottle of water. With that, we were certainly feeling revived and crossed the finished line together at the entrance of Frasers Hill as one team!  Really love my mates for their thoughtfulness and amazing consideration shown generously to each other.

We gathered for the obligatory group pic of the iconic Clock Tower and it was here that our poor foldies collapsed upon each other. George's classic Dahon chain fell off and worse still, his rear tire blew up almost like a final protest from his steed that it had had enough. Inspection revealed not a tube problem, but a tire problem and that is serious when we have no spare tire.

Being Ramandan, the Muslim fasting month, many places were closed and we had to settle for a dismal Indian stall that was thriving because no one else was opened. But we were hungry and beggars could not be choosers. Fortunately, we made it up by having a grand tea at our 3 bedroom apartment at Silverpark where we enjoyed a stunning view. Snacks that we bought from the 40 year old Bakery came in very handy, and that with piping hot coffee sealed the deal.

Meanwhile, KC was on the prowl for some rubber hose and found a luminous yellow one in the garden. A short strip was cut out to serve as a inner re-enforcer for the split tire and it did the job. KC truly is an engineer and bike mechanic par excellence. He did a similar tire repair job in our last 321 Tour in Laos in Jan this year.

We had a pre-dinner sunset viewing and was really impressed with what we saw. The splendor of different shades of orange hues against the silhouette of the mountain ranges were priceless. Dinner was a much more agreeable Chinese food at Hillview Restaurant and we all enjoyed it immensely. The elderly man who ran the eatery totaled the bill impressively in his head without a calculator. No other places were open for coffee and we ended up going to the provision shop to buy snacks and had coffee in our apartment.

With the cool weather and tired legs, sleep came easy. It was so special to be in the mountains especially coming all the way up on our own steam. A deep sense of satisfaction dawned on us and for me at least, it was a spiritual experience. The day will soon come when I can no longer ride up hills and mountains but as for today, we are blessed to be able to accomplish this and I give thanks to God for giving me a very special experience with such wonderful friends.

He is good and his love for us truly is incomparable.

From east to west, from dawn to dusk, keep lifting all your praises to God! Ps 113:3