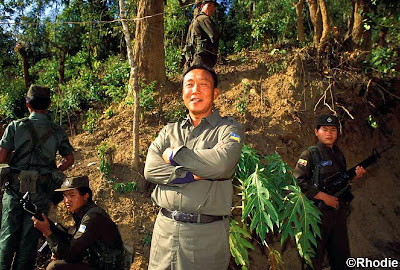 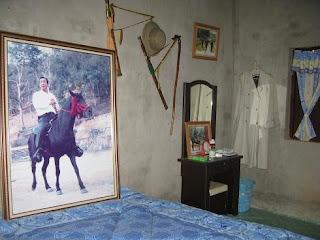 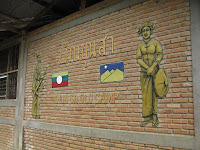 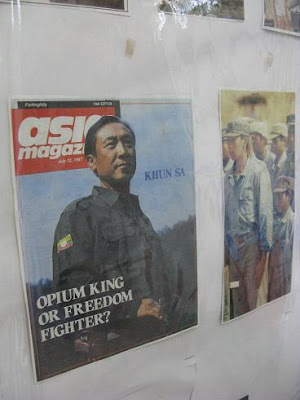 Out of Mae Salong, we did a short detour to Khun Sa Old Camp Museum, the famous Golden Triangle drug lord and self-proclaim Shan state freedom fighter base at Bhan Thoed Thai. His hideout on our map indicated "sensitive area" (6km from the Burmese border) and we had to pass by some serious looking police roadblocks to get there. We were fortunate that there was a private tour group there and a guide, who may be one of his ex-soldiers, proudly opened up the sorry looking building for us. We saw Khun Sa's bedroom which was remarkably simple, his dining parlour, prayer room as well as photo exhibits. No one would imagine this squalor of a place would belong to a cash rich drug lord.

He was born to a Chinese father and a Shan mother. Trained under the KMT, Khun Sa led an army of 15000 men. At its peak, this region of Lao, Thailand and Burma supplied 70% of the world's opium (taken over now by Afghanistan) earning Khun Sa the title, "King of the Golden Triangle" as well as the privilege of being the US most wanted drug lord with a US$1 million bounty. His opium too had a distinct brand with 100% quality guaranteed.

Khun Sa supposedly poured a lot of money into developing the village of Thoed Thai with roads, electricity, school and hospital. No wonder his funeral in Nov 07 was very well attended. He actually died in Rangoon, Burma after surrending there in exchange for diplomatic protection from the US Govt and lived his remaining years very well, even running bus and tour companies.
.
Prince of Darkness or Robin Hood, Khun Sa's name still inspires a mixed sense of awe and controversy for some time to come.
Posted by Oldyonfoldy at 6:34 PM