One of the drawbacks of a non-standardised global bicycle system is different standards applied across bike manufacturers. This is especially seen in the tyre valve stems where there are at least 3 types - Schrader, Dunlop and Presta.

If you own several bicycles and thus possibly have to live with different valves, this can be a pain as you either have to keep switching the pump adaptor or carry an adaptor permanently in your wallet (I do this!).

So lets start with the most common valve first - the Schrader also known as the automobile type valve. It was invented in 1891 (yes, that long ago) by an American called August Schrader. It is the most widely used valve even outside the bicycle industry where it is common in aircon and refrigeration applications. It is usually found on thicker rim bicycles as it is 21/64" in size. By far the easiest valve to live with for me, as any petrol station air pump will do the job. Also because it is very common, its easy to buy tubes with Schrader valves especially in third world countries and is my choice for touring. It is also arguably more robust.

That said, the Dunlop or Woods valve (patented 1888) is reported as still popular among third world countries especially in China or some parts of Europe. Its was invented by a Scotsman C.H. Woods. Its a very rare valve where I come from and I've seen them only on Flying Pigeon Chinese bikes in Singapore but surprisingly, Schwalbe website claims its the most common worldwide! 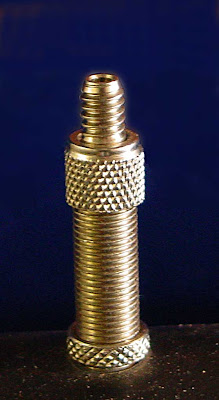 I don't know why but when it comes to Presta valves, they seem to be sexy and held in high esteem. This is probably because they are used strictly in racing bikes or roadies and more expensive bikes, as their narrow rims demand the smaller sized Presta. They are also easier to pump as there is no spring pressure valve unlike the Schrader type. They usually also have a lock nut to prevent the tube from slipping/shifting in the rim. Purists would claim they are more aerodynamic.

Its main disadvantage is because the hole in the rim is so small, only a Presta valve tube can be used making it extremely challenging when it comes to fixing a puncture while cycling in Angkor Wat, Cambodia and running out of tubes! Of course, you can always travel with a file like my buddy Chris when he tours.

And yes, both Presta and Schrader valves are capable of managing high pressures... don't let anyone tell you different though Presta seem to hold air for a longer period of time.

I reckon the world would be an easier place if there is only one valve, be it Schrader or Presta!
Posted by Oldyonfoldy at 2:25 AM