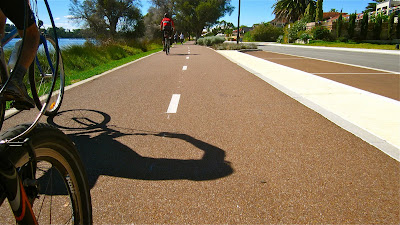 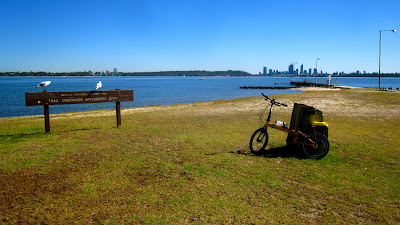 It was great to be back into my Wed cycle routine. In preparing my Speed Pro for the ride, I was surprised at how little air the tires lost even after a 2 months hiatus and it is true that Presta valves keep air better. 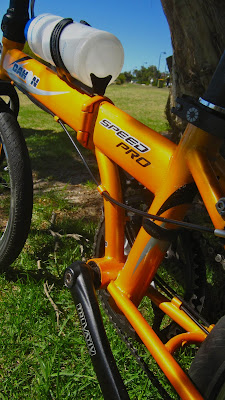 Rod and Ken showed up like clockwork at 0725 at our usual meeting point. We had the privilege of having Colin join us as well. He hails from the plains of Africa many moons ago and long distance hiking is more his cup of tea. Unfortunately, Colin arrived a little early and went off first, thinking he could catch up with us. I had told him the wrong time - 0715! It was a cool 22c when we started off to Point Walter and it was glorious to be cycling the beautiful bike paths of Perth once again. 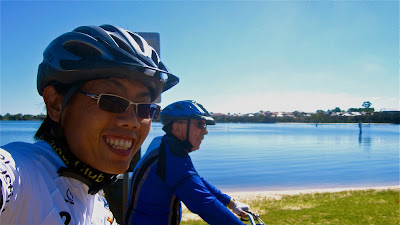 Somehow, the ride went by quickly as we enjoyed good conversations on the saddle. The smell of fresh air and deep blue sky were in sharp contrast to the smoke that engulfed us a few days ago due to bush fires in the hills where 72 houses were destroyed. It was good to see many people jogging, walking their dog and cycling along the river.
We rang our bells as we passed walkers and one elderly man exclaimed, "You should ring your bell!" and Ken replied, "But we did, mate!" Apparently, he was hard of hearing and Ken stopped his bike and had a good and friendly banter with him on how to get his ears tested by phone.
With Colin on a racer, that got me moving at a faster clip and it was fun cruising 30kmh at times. Made me appreciate the vast gearing of the 24 cog Speed Pro. All in, a great ride as usual and I can't wait for Wednesdays to come, once more.

Posted by Oldyonfoldy at 8:41 PM

love the cycle tracks there. so wide! and with the scenery...bonus!

Brrother Al! U have a speed pro? I am so jealous!!! I just got a Speed D7 and I am quite happy with it. It's much better than my Aeon. I am saving up for a Hammerhead! Email me the next time u are in Singapore and we can go for a ride together yeah? Take care!