Day 1 - A dusty start to Takeo 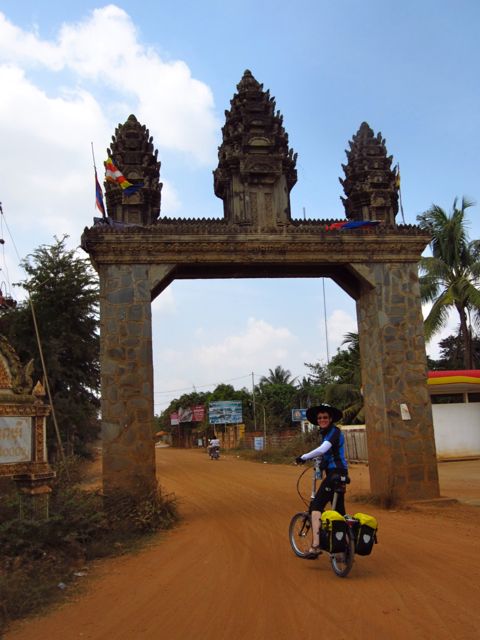 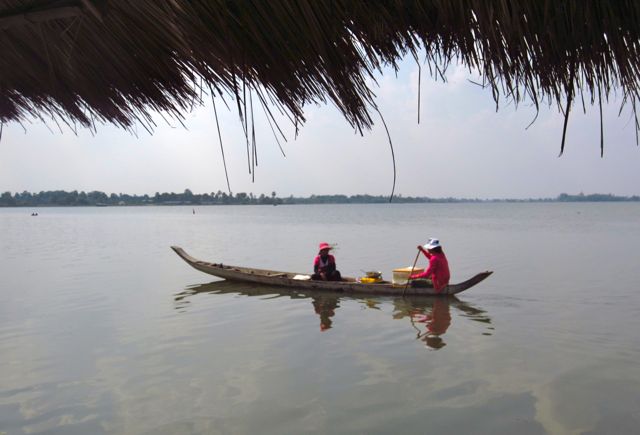 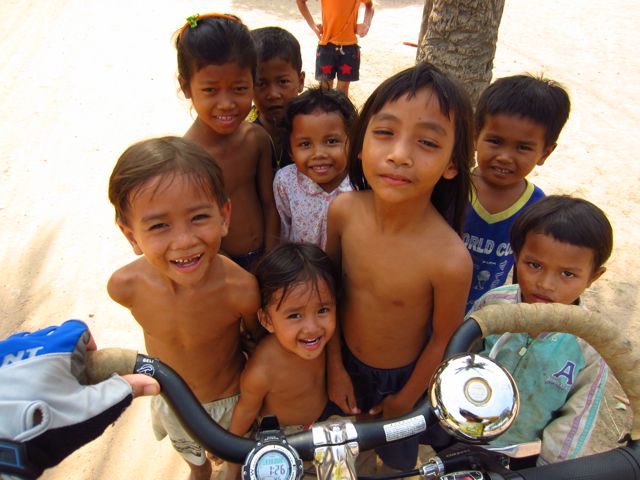 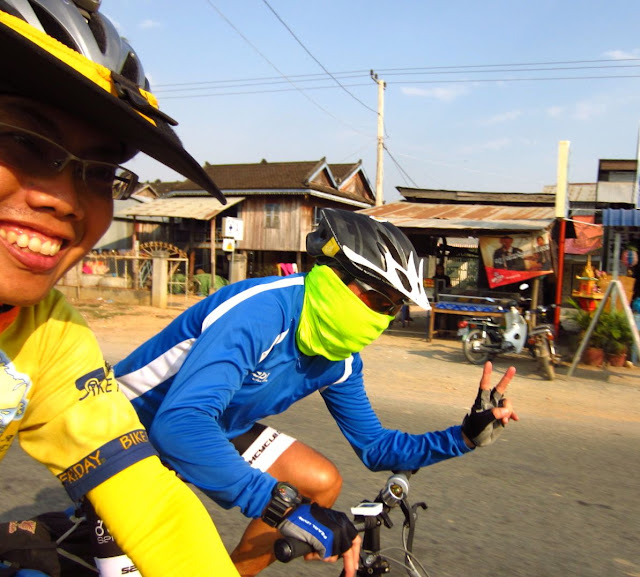 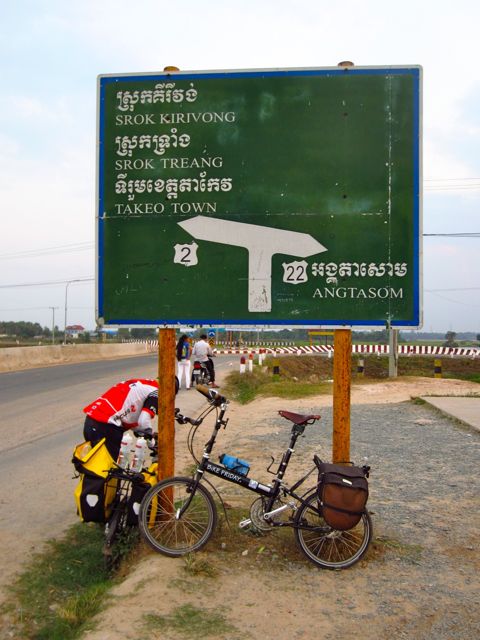 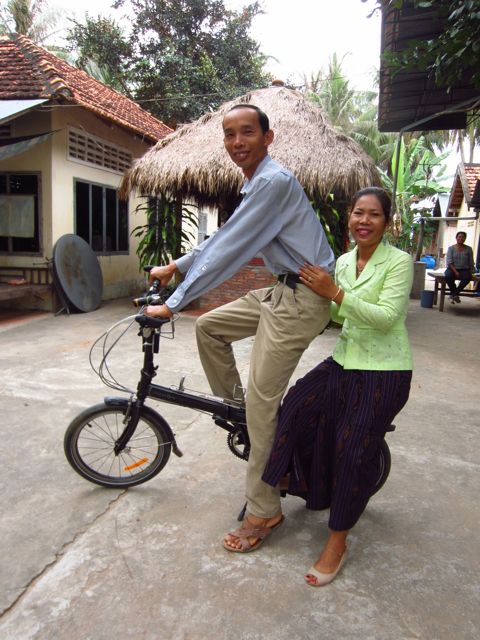 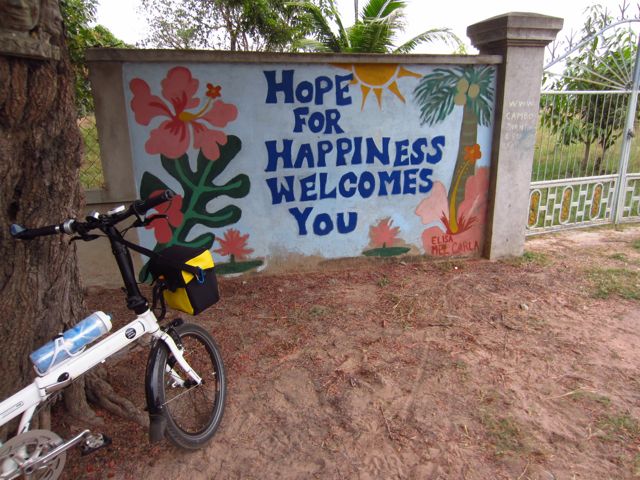 The words of Shakespeare, "parting is such sweet sorrow" became reality that morning as Ying Chang and I bade farewell to our better halves (& family) who were flying back to Spore. However, the sorrow was quickly drowned by the great excitement we all felt in our hearts and everyone was ready to roll at 830am. Well, almost everyone! We wolved down our breakfast quickly and there was much activity as we adjusted our panniers etc to make sure it was dust proof for the long 90km ride ahead to Takeo. Would our bikes be able to take the pounding? That was the question on everyone's mind.

Reaksmey, my Cambodian son, showed up with his friend on his yellow scooter, all ready to lead us out of the chaotic streets of Phnom Penh to Highway 2. He was teary as he so badly wanted to join us in this epic ride, but could not. So he being there meant a lot to me. 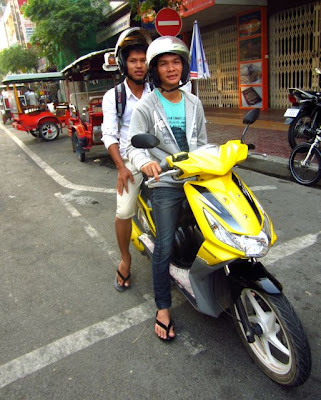 It was quite a challenge to lead the long convoy through numerous traffic lights and crazy cross-junctions but we all made it out alive. I imagined myself leading a bomber raid across Germany, and wondered who will make it out ok through all the deadly anti-aircraft bullets/flak everywhere! 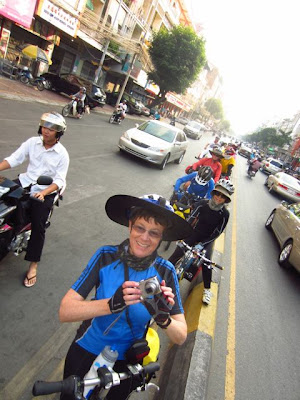 When we got to the start of Highway 2, I breathe a sign of relief and we thank Reaksmey for his much needed guidance. With dust mask/scarfs on, we took off heading 15km for our first destination - The Killing Fields of Choeung Ek. 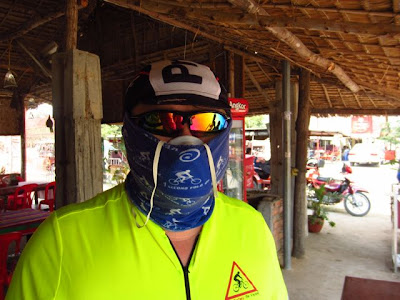 The journey there was as expected, hot and dusty but we were fresh and eager, so the ride was no real drama. This is a very historical place as the Khmer Rouge during their reign from 1975 - 1978, murdered and buried thousands here. This is indeed a very grim place and it reminded me of how much evil & darkness the human being is capable off. Such was the state that many in the team didn't want to go in to experience this, and that was understandable. Sol Sol declined too. 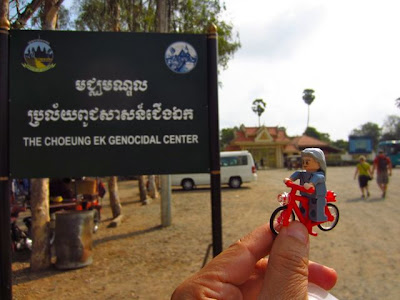 We set off again with a heavy heart and the sun was now beating down upon us in full force. That got me worried for the group especially those from Australia, as heat stroke was a real risk. Barbara was obviously quite affected by the tough conditions, but she soldiered on, dunking herself in water at every opportunity to cool off. At the 40km mark, there was a turn off to a beautiful lake and ruins of the Ta Promh temple, and that made for a perfect place to cool down and fuel up with lunch. 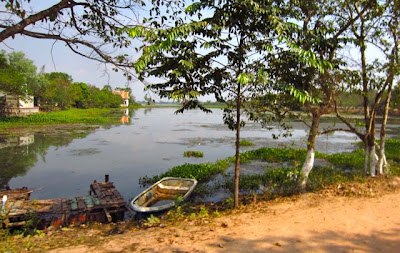 Unfortunately, we started to have bike trouble. Mike and his team at the tail end of the group was delayed due to mechanical problems. May's Dahon Speed TR with new Schwalbe Marathon Racers got her rear tire badly cut on the bad road so much so that it had to be replaced. Trouble was - we didn't carry any spare tire although YC had a skinny Kojak. The fixing of the tire was probably the highlight of the month for this quiet hamlet and kids all came a running to witness the most exciting thing here - the repair of a tire by a Barang (foreigner). 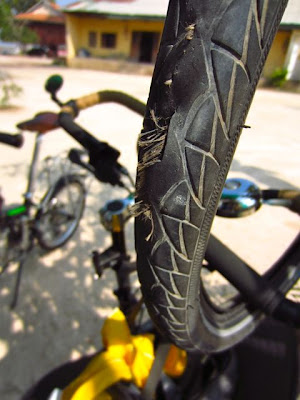 While the rest of the team were enjoying lunch, all relaxing & hammocking in the floating hut by the shore, poor Roland was not at peace with his wife's tire episode. Providence came in the form of a nice Cambodian man on a scooter who went to the local bike shop, and got him a brand new tire. Although it was no Schwalbe, the made in China tire lasted the whole journey and for US$10 plus delivery, it was truly God sent! With that settled, Roland could enjoy his lunch of rice, grilled fish and chicken, + veggies. It was a simple lunch and the Cambodians do not have the habit of wasting any part of the chicken. Neither did Joshua! 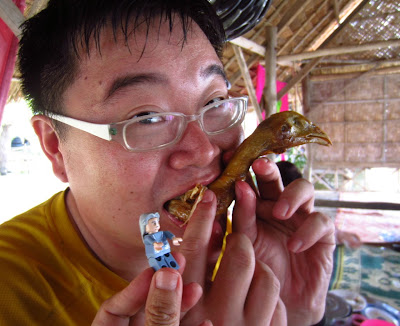 With the new tire all pumped up and our stomachs filled, we continued on our journey but not before getting a free tour of the ruins by a very nice Cambodian young man who spoke perfect Mandarin. We were touched by his kindness to befriend us and show us around. By this time, we were a bit behind in our schedule and I turned on the speed dial slightly. I soon discovered that in the group of 11, we can only go as fast as the slowest rider. Nevertheless, we tried our best and this being Day 1, everyone were just finding their legs.

One way to break the monotony of a long ride is to play games on the road. My favourite is to draft behind slow moving vehicles. I was fortunate to find a motorcycle Tuk Tuk carrying concrete pass me and I tailed him for a good distance. He was cruising at a very comfortable 30-35km/h which was perfect for me. Drafting cuts 20-30% of the drag so I had a very nice time getting some serious wind in my face!


We arrived at the end of Highway 2 T-junction at 6pm and have cycled through some beautiful countryside. The sunset we saw too was magnificent and we found out later, there were more to come. At this stage, we were all feeling a little buggered, not so much from the distance but more so, the dusty and hot conditions. 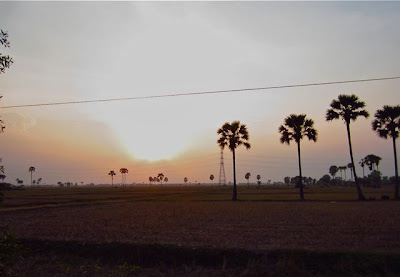 A life saver appeared in the form of an airconditioned petrol station that served ice cold drinks. We raided the place and drank like thirsty camels. It was good for everyone to re-group once again and we didn't have to wait too long for everyone. Our abode for the night was the Meas Homestay, another 7km more towards Highway 3. As the sun was fast sinking, we mounted our lights and the darkness descended upon us quickly, catching us by surprise. It was no fun riding in the dark especially with roads marked with potholes and sand traps.

It was really nice to have Siphen and Mach waiting for us along the road on their scooter. We had called them earlier and they knew we needed help to make the right turn into their beautiful home. Upon arriving at 7pm, we were given a humongous and delectable dinner of rice, pineapple curry, vegetables and pork ribs. 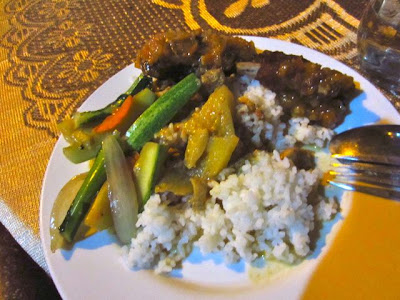 Its so good to end the ride with such amazing food and more amazing hospitality. Siphen and Mach fussed over us, making sure we had enough water, that our rooms were ok and even provided mosquito coils as we enjoyed dinner.

After dinner conversations with the Meas and their extended family proved for me to be the highlight of the day. Mach is a school principal and Siphen is an English teacher at the same school. We found out that they had asked their students to come at 5pm, so that they could practise English with us. Unfortunately, we came late. We shared so much about life together, from politics, economy, culture, lifestyle etc and I came away resolved to bring a team to help the school next year. The Meas also told us how a B52 bomb rained down upon them during the war and one landed right in their garden. They have converted that to become a fish pond now. 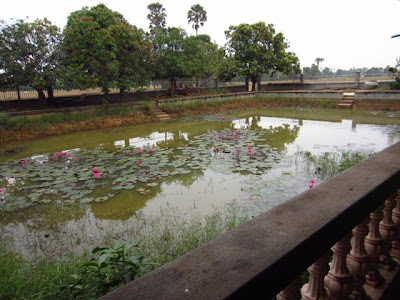 Our accommodations were simple but very comfortable. We basically were sleeping in a typical Cambodian house and it was so quaint to be snoozing inside a mosquito net. This being winter, aircon was not necessary and we all slept like babies. Shakespeare must have ridden a bicycle when he penned those famous words as there were more sweetness than sorrow for Ying Chang and I, on this most special day of our ride. 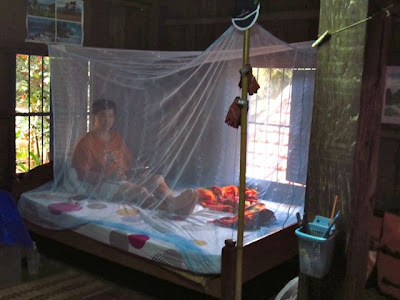 Kudos to you, Bro Al for leading half a platoon! Looks like lots of bandits leaving the city!

What was it that did the tear to the racer tyres!

I believe it was a jagged rock as we were cycling on the sandy path... must have been razor sharp to cut the tire to bits.