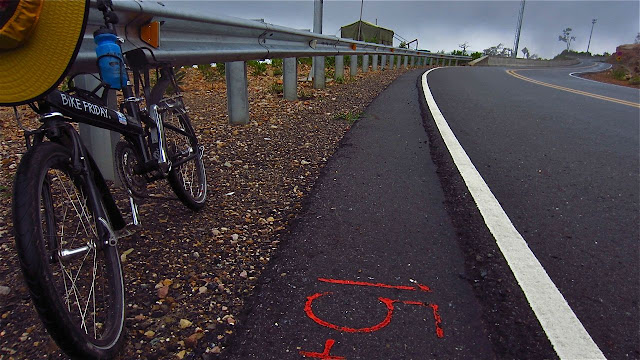 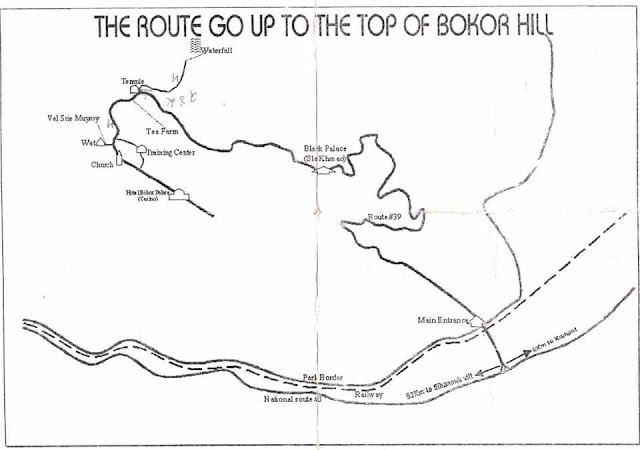 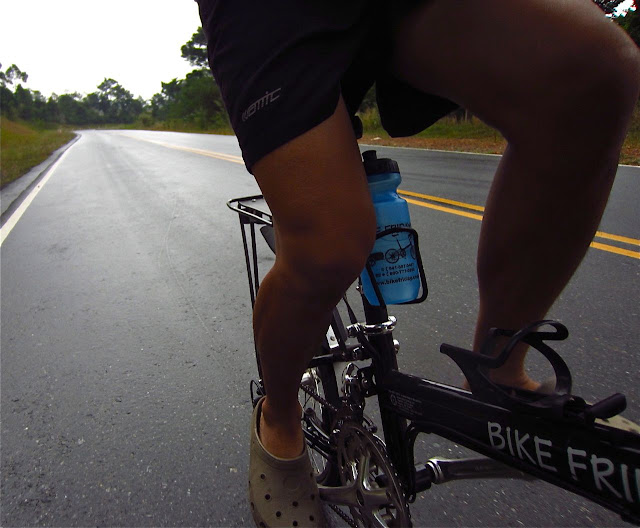 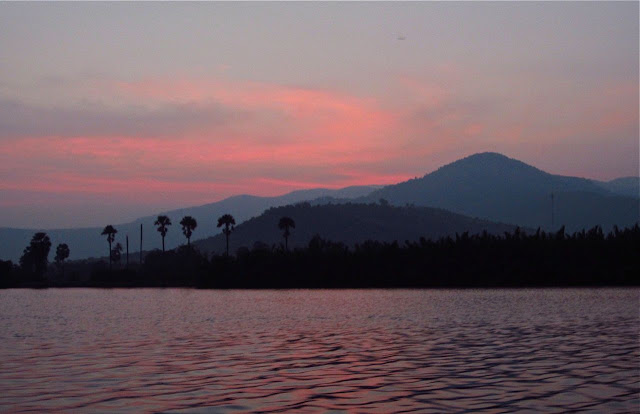 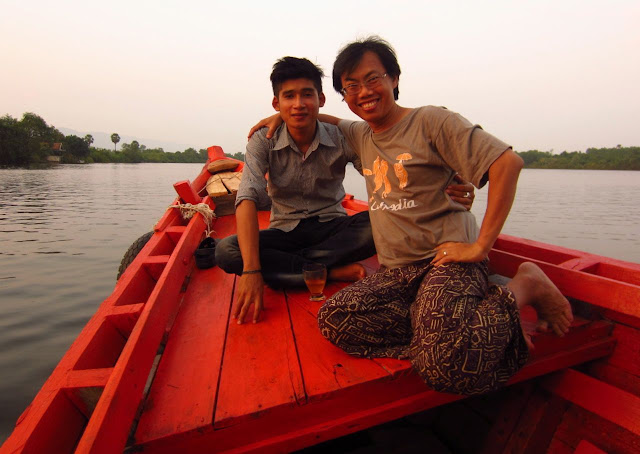 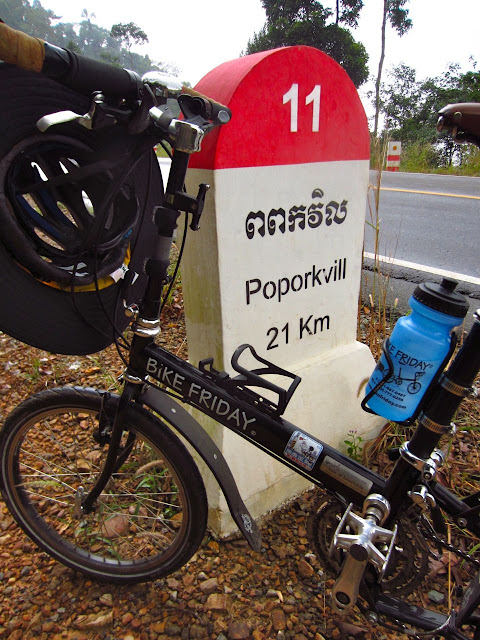 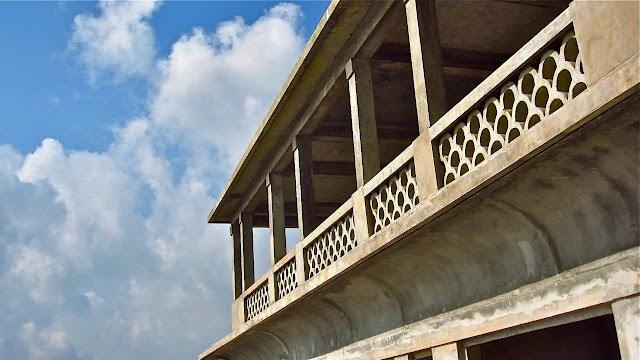 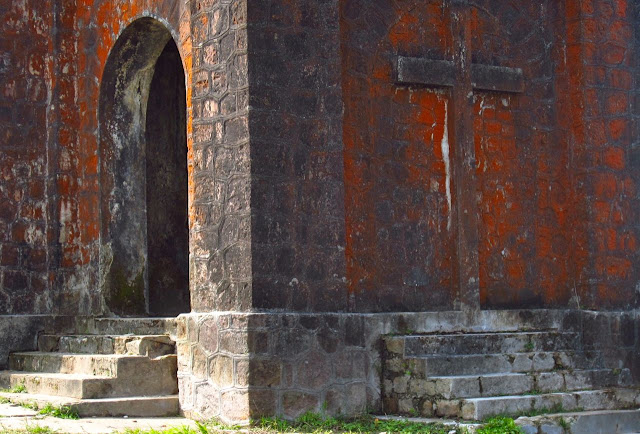 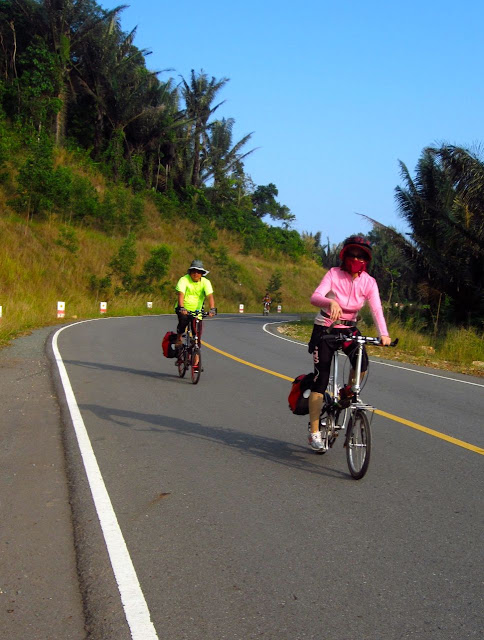 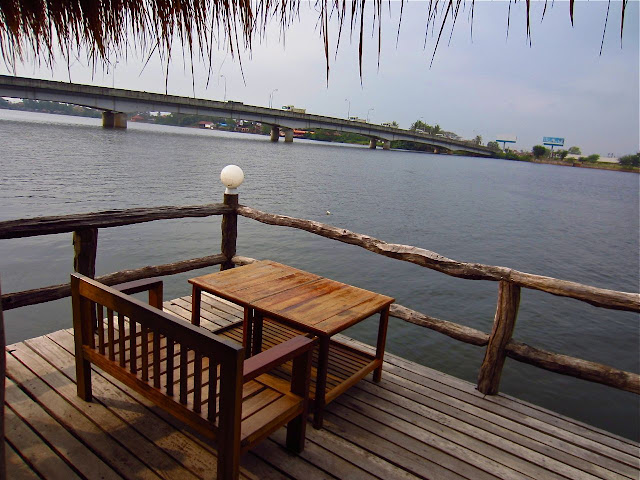 It was nice not to pack and move along again this morning as this was supposed to be our rest day in Kampot. We hired a van to take us sightseeing and our target was to visit the Bokor Mountain National Park.  I had missed that last year and wanted to go up the 40km distance by bicycle of course and wondered who was crazy enough to join me on this supposed "rest day". Amazingly, I had Uncle Teo, Papa Mike, Ying Chang, Pete and Joshua all gung-ho putting their hands up and insisted on doing this hard climb with me, so much for a day to rest! Really love these boys. The rest of our friends got up the chartered mini-van with their foldies to meet us up Bokor later. 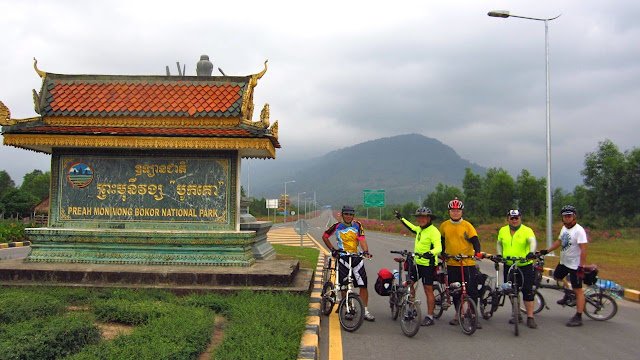 We left at 830am after a huge breakfast and a slow morning of lovely banter. Kudos to Natural Bungalow and the amazing river view we enjoyed. Our time here must count as one of our highlights. The ride to the foot of Bokor National Park was only about 8km on flattish road. The fresh and crisp morning air inspired us to ride at a fast clip and we were flying at 30km/h easily. As instructed by Daryl the hotel manager, the turn off is just after the petrol station and true enough, there it was. Hard to miss actually with the big grand entrance! Looking at the peak, I felt a sense of deep desire to conquer it at all costs. Somehow after my Taiwan trip up Wulin, I have strangely developed a taste for hard and long climbs.

It was nice to pass the Guard/Toll house and to discover that bicycles go in FREE! The initial climb up was very gradual and I was pleased but secretly disappointed. Soon, Ying Chang and I pulled away from the pack and it didn't take long for him to disappear from my sight. 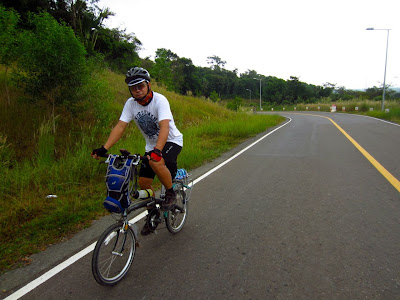 I have learnt that during climbs, it is best to go up on your own pace and wait for others later to regroup. Poor Pete got stuck with the group as he felt bad to break ranks, fit as he was. The solitude I enjoyed while soaking in the scenery as I climbed higher and higher was divine and I broke up into songs of praise to the One who has made all this possible. I started to perspire even though the temperature was fast getting cool. Then, dark clouds came and a light drizzle started. I sensed the love and care of my Heavenly Father even more. 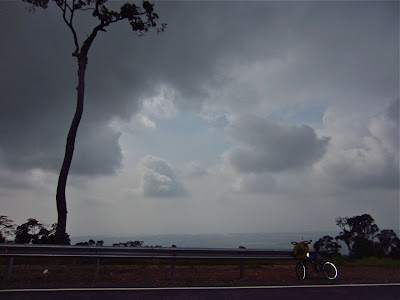 It was delightfully special to slowly conquer each switchback as my legs spun at a constant cadence. No need for granny gear unlike Taroko or Laos, mid chain ring was more than enough. 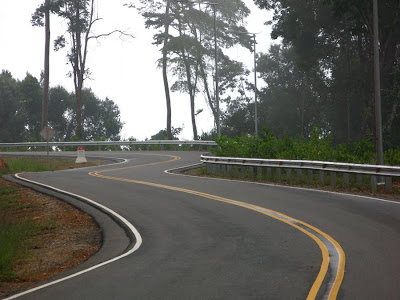 It was extremely satisfying to see how much altitude gets gained with time. Soon, the coastline of Kampot came into view and I could see even as far out as Kep. I was getting a bit worried as I was running low on water. But at the 17km mark, salvation appeared as our mini-van came alongside. Roland was offering me a ride up the van for $50 but I told him that I would pay him $50 if he left me alone sans for a top up of my water bottle and some food. With fuel in my belly and a full water bottle, I continued my climb happy to see the mini-van drive on.

At 22km, there is a big car park with a huge Buddha. Here lots of drink and fruit stalls were strategically positioned, and we had our lunch at a restaurant. Climbing somehow makes for a healthy appetite and we wolved down our rice and noodles in no time. Feeling very satisfied, I managed to encourage Barbara to climb up the next 10km with me and she protested at first. I offered her my Bike Friday and that sealed the deal. It was fun to teach her the finer points of climbing and soon, she too discovered the joy. It was harder for me though as now, I was on a very basic Tern C7 with only 7 speeds but it was surprisingly manageable. I was mindful of the saying that a bad workman blames his tools but with good tools, it makes for lighter work! Always. 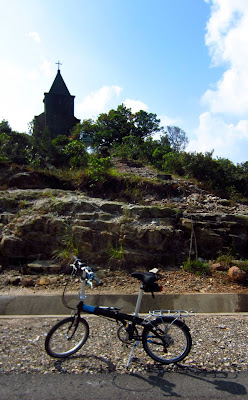 The casino soon appeared and this is the reason why the roads were first class all the way up. Some big money have been invested here! A few of the gang went in and discovered that there was a nice lunch buffet offered at only US$8 so we would have to do that on our next climb. The security staff were not thrilled to see us cyclists and directed us to park at a quiet corner. Given that we did not smell exactly of fresh roses and more like dried salted fish, I fully understand. I supposed too that it would have been a different story if we arrived in a sparkling black Mercedes Benz with wads of cash. 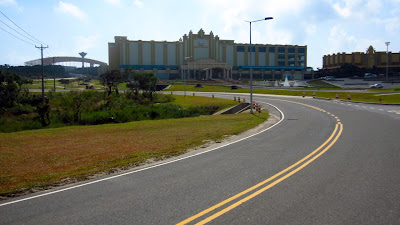 Further pass the new casino lies the 100 year old Catholic Church and a km on is the old French built casino. A church between two casinos! It is said that during the Khmer Rouge times in the mid 70s, frequent shoot outs occurred between the old casino where govt forces were and the church. Bullet holes can still be seen. 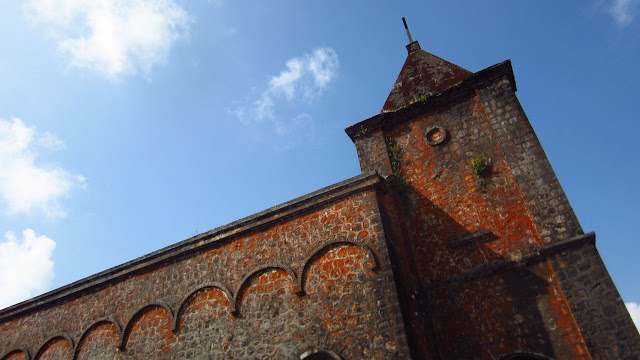 I am very glad that the old casino is being restored to its former glory. A movie, City of Ghosts was shot here in the 80s which featured the old casino and it triggered Chris Wee's memory enough to lend me the DVD later on. 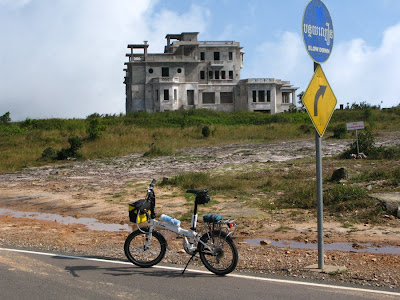 After an hour or so of exploring the old casino and the church, it was time to go - down! After a quick briefing to the team on how to descend safely, we were off. It was magic to glide through thick mists and fog, with the wind in our faces. I was in no hurry to finish off the 32km of downhill and took my time to savour the changing scenery once again. The grace of God allowed us to witness the beautiful setting golden sun against breath taking mountain views and I was so moved. Papa Mike, with the natural advantage of weight, was the fastest one and try as I may, I couldn't catch him, at least not on the humble Tern C7. He clocked 56.1km/h on his Dahon Speed 16! 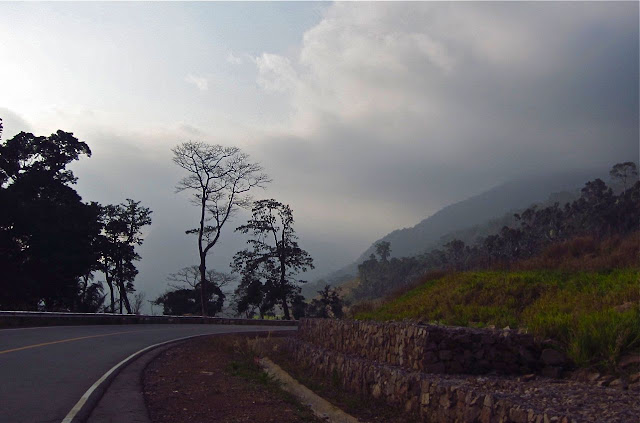 We all arrived safely at the foot of the National Park feeling truly exhilarated. For some, this was their first long descend and everyone was jubilant! I tried to get my Bike Friday back from Barbara but she wouldn't let me! It was a mad rush back to Natural Bungalow and I went at full speed as I wanted to ensure the boat we booked for the evening river cruise was in order. I managed to reach back in 20 mins flat and even had time for a quick shower before the rest of the team arrived. They took their time and rode like it was their grandfather's road, enjoying the evening ride. It was straight to the bar for some well deserved ice cold drinks when they got to the hotel. 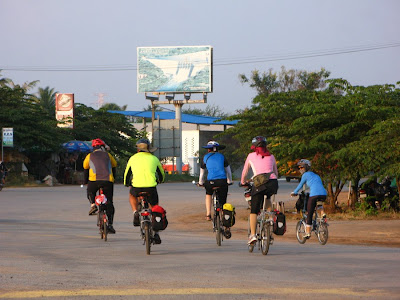 Being on a boat chugging up the Kampot River, drink in hand, with the setting sun was a refreshing change from sitting on a bike. Our boat seemed to have a mind of its own as far as listing to one side and we all had a lot of fun trying to make it stable. The sound of laughter and bright smiles masked the tiredness of our legs. 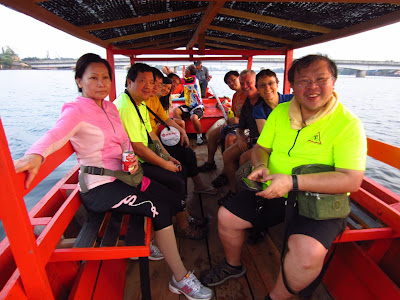 As we cruised past the interesting river bank, large flights of birds would pass overhead us and we gaped in awe at the richness and beauty of this special part of Cambodia.

Dinner was a rowdy affair at a local Cambodian restaurant which Daryl recommended. Apparently, it is popular to eat with loud music and listen to ballads by short skirted singers. 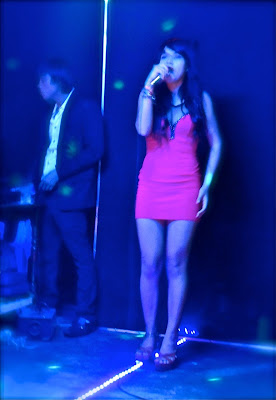 The food was tasty but devoid of flesh, particularly the chicken. Seems like we ate mostly bones cooked with the freshest tasty ingredients, and that reflected a bit of the state of the country. But we didn't mind it one bit as we felt very privileged to support local businesses and go native. 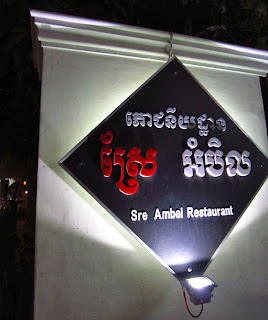 What a "rest" day it has been, 80km almost half of it uphill! Our bodies were a bit weary but our spirits were so refreshed and renewed today at the beauty we have seen and experienced.

Posted by Oldyonfoldy at 8:48 AM

Very nice account Sir Al! How do u compare this experience vs say a Taiwan trip. Do you see any common traits that just make u come back for more?

Hi Bro TW. Cambodia and Taiwan are like chalk and cheese as far as road conditions, climate, scenery and food are concern. What binds is the hospitality of the gentle and kind people. As they say, its always the people that makes the difference. I love Cambodia and her people and been there annually since 2003! Come ride with me soon.

With such beautiful roads, it would be a crime not to ride it. The USD$8 buffet lunch sounds like a great incentive...if they let you in wearing cyclng outfits :-)

Fm Barb Meadows - Loved reliving the trip once again! I think we were all more scared in the listing boat than in travelling at break-neck speeds down Mt Bokor!