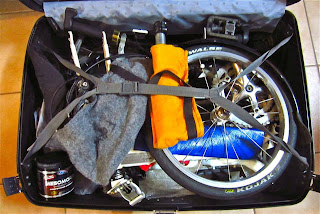 I was elated when I read the above news in a Malaysian newspapers. Many airlines blindly impose an additional fee for sports equipment including folding bicycles despite their packed sizes in small, "normal" size packages. Culprits include Tiger and Air Asia and it is done simply to be a source of additional revenue. For instance, an Air Asia flight from Singapore to Sydney via KL will add another $66 to the ticket. In the USA, many airlines really hit hard for checking in bicycles and this can be $150 per trip for full size bikes. Kudos to Jetstar, as well as many other regular airlines like SIA, Garuda, Qantas, Silk Air for allowing bikes both folding and regular with no charges.

The impetus for this move by the Malaysian Tourism Board is to increase cycling tourism and is yet another indicator of how foldies are gradually making its impact on society. Datuk Abdul Khani was delighted that 300 cyclists participated at the launch of his Bicycle Countryside Packages.

I'm not surprise if the honourable minister himself owns a foldie, or two.

Posted by Oldyonfoldy at 4:39 PM