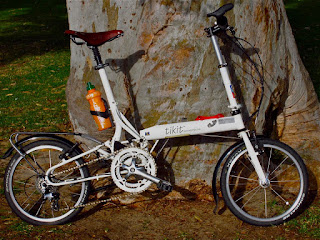 It was great to read that Pasadena is giving people $220 to ride foldies in conjunction with public transport as the last mile solution. I'm very glad that the advantage of a foldie is recognised by Transport providers.

How to get from the transit station to work or home: this perennial transportation challenge is known as “the last mile.” And it is a real obstacle to getting people out of their cars and onto trains and buses.

In Pasadena, California, they’re now trying to solve that puzzle with folding bikes, and a little assist from social media.
The city’s new FoldnGo program offers people who live, work, or go to school in the Southern California City $220 off the price of a folding bike. To hold up their end of the deal, program participants are supposed to ride transit with their folders at least twice a week, and are encouraged to check in with pictures on Facebook to prove it.

As last-mile solutions go, folding bikes have a lot of advantages, according to Fred Silver, vice president of Calstart, a consortium promoting clean transportation technologies that is implementing the program for Pasadena. "Folding bikes are less intrusive that regular bikes on trains during peak hours," says Silver, who says that folding bike technology has advanced a lot in recent years, making them easier to fold and more like conventional bikes in their ride. "You can bring them on the bus, which you can’t do with a regular bike. You can bring them to your cubicle. And they’re getting to be like luggage – you can drag them behind you now."
Silver says that the folders provide a "triple bottom line" – good for the environment, good for people’s health, and good for the finances of transit agencies, which typically have to pay about $25,000 to build each parking spot at a transit station – if the land is even available.

Altogether the program will hand out 600 vouchers for the purchase of folding bikes from Dahon, which is partnering in the effort. Depending on the model the recipient chooses, the final cost will be anywhere from $214 to $258. Pasadena City College students can get another $80 knocked off the price.

Silver says that Calstart hopes to create programs like Pasadena’s elsewhere in the sprawling region covered by the Los Angeles County Metropolitan Transportation Authority, and has published a “Folding Bike Implementation Plan” to assist interested municipalities [PDF]. He says subsidies on folding bikes could represent a meaningful part of the solution to many of the transit problems in the region and around the country. "It’s a win, win, win situation."
Posted by Oldyonfoldy at 5:37 PM

Was browsing for Dahon Dove, and I found my way here.

I am an avid folding bike rider in the Philippines. Folding bikes are fast becoming the bike of choice here. It's compact and easy to set up.