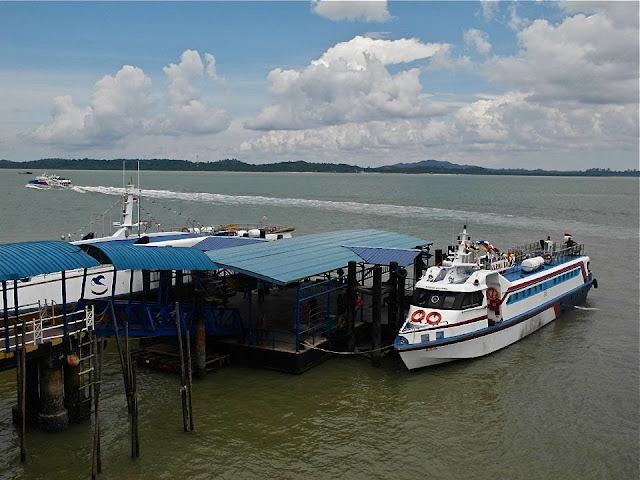 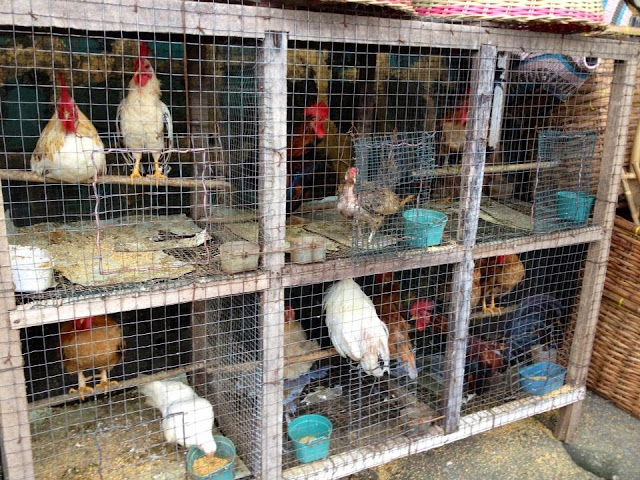 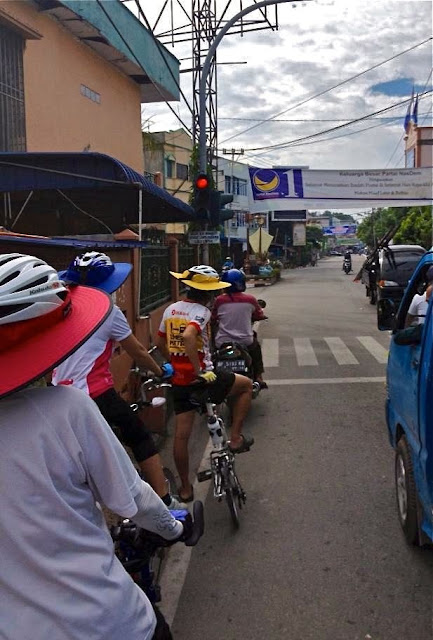 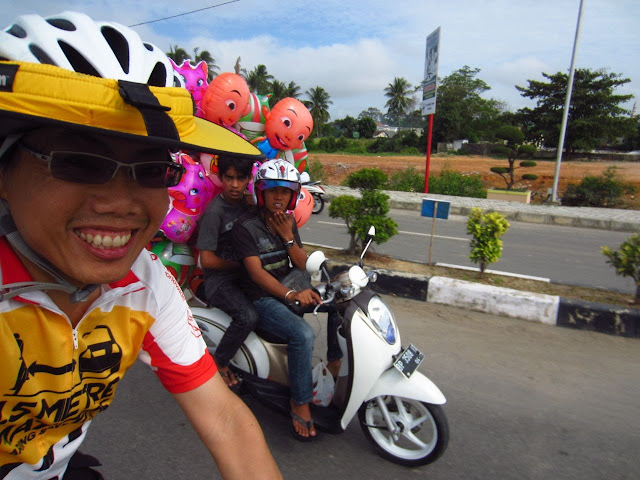 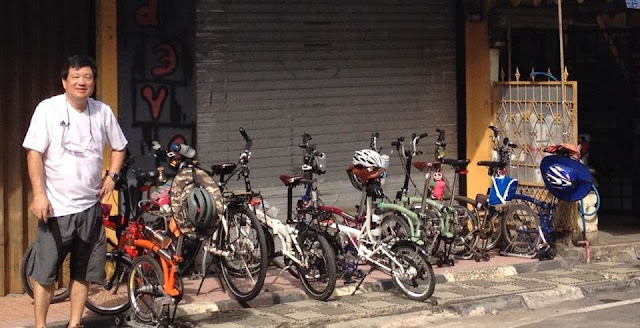 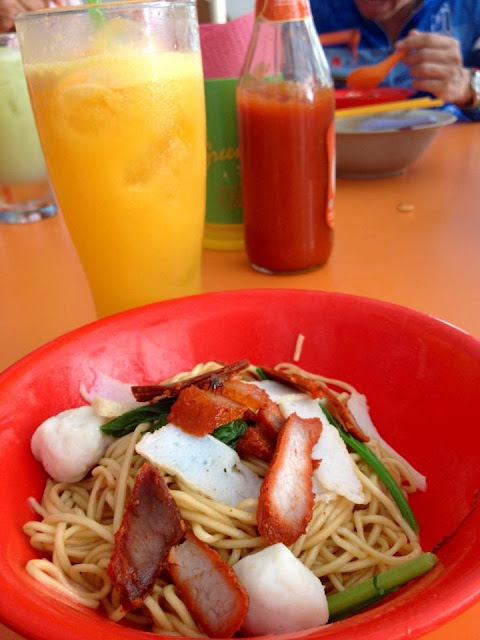 I woke up early to recce a route for the morning ride around Tg Balai. Its always good to make sure I don't lead the fold astray and it was nice to see the town wake up slowly. Perhaps this was Sunday and also a national holiday so the streets were quiet and most shops were shut. As I got out of town, I bumped into a very familiar orange colored Brompton and it was none other than Uncle Roland. He too had the same idea for an early morning exploration and shared that a very suspicious guy was hanging around him. Roland reckoned he was not going to be invited out for breakfast and took evasive action. Later on, I found out too that Ejin too went out to spin her wheels.

At 8am, the troop was all ready to go and we had a very forgettable coffee and noodles breakkie at our hotel's cafe. Just as we were about to set off, Audrey's front tire gave up the ghost and George Kee, her knight in shining helmet, came to her rescue and fixed it in 3 min flat. 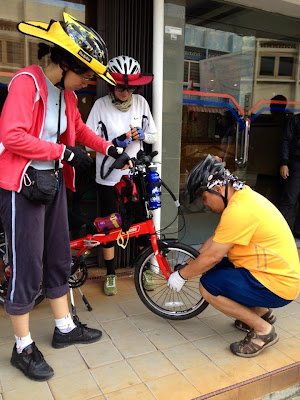 We rode to a Chinese village just 2km out and the same wrecks along the coastline were still there after so many years. along with other boats.. They made for great pics and I felt like a Japanese tour guide leading his obedient tourists as everyone was clicking away. 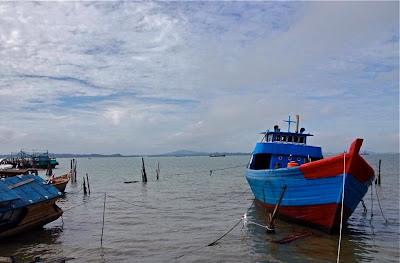 Next stop was a bird/chicken seller who displayed his wares along the road. What intrigue was a very cheeky monkey who enjoyed showing us his bottom, and that got us laughing non stop. 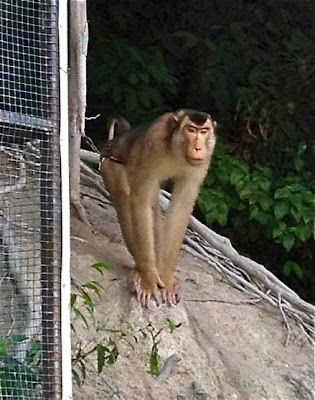 For a workout, we all climbed up the steepest hill in town and made a turn into the old Dutch Naval Officer's villas with commanding views. The old tennis courts overlooking the sea bore testament to the good life the colonials enjoyed then. A quick ride back to town saw traffic really thicken and we headed for our real breakfast - Bak Kut Teh (stewed pork rib soup in herbal broth). There are at least 3 shops here right after the jetty but the first one is said to be the best and we were not disappointed. It was a real fitting end to our trip and apparently, this stall was famously featured on Singapore TV. 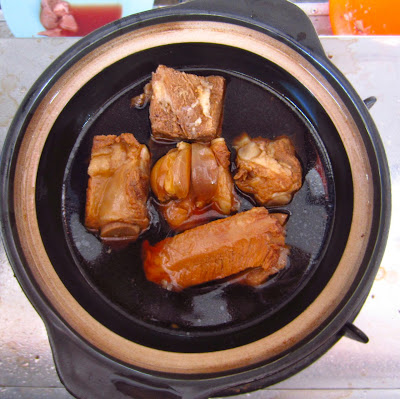 There was still time to make a quick dart into the bike shop and Audrey got the deal of the century, a mirror for less than $2, fitted. There were plenty of MTBs hanging around and indeed, Karimun has some very nice off road tracks that deserve to be explored in the future.

We went home in 2 batches as the ferries plying the Singapore to Tg Balai route are not very bike friendly. I led the 11am while Ejin took the 2pm one. It was sad to finally say our goodbyes to everyone as we entered the ferry terminal. 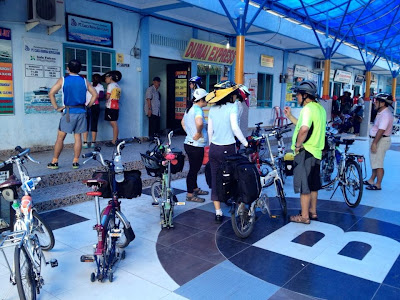 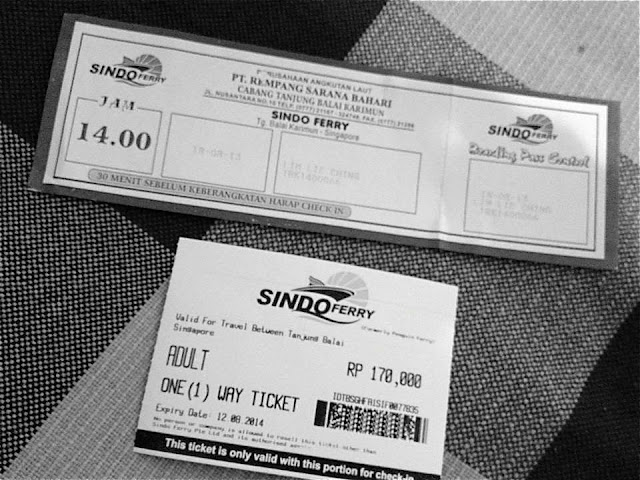 Group 2 continued their eating spree and when I looked at their pics later on, I could not but feel a bit jealous... Otak Otak, Laksa, Wantan Mee and more. O well, that just means another trip must be made to catch up on the food I missed! 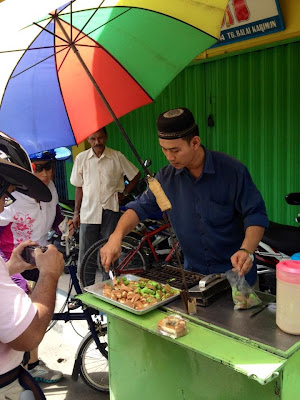 All in, I was very happy to be able to share the joys of touring in the Riaus with these fine bunch of fun loving folks. Till we tour again, my grateful thanks to Kevin, Roland, George, Loh, Ejin, Cindy, Elaine Pan, Elaine DT, Audrey, Wendy and Berenda for a very special time in the Riaus. 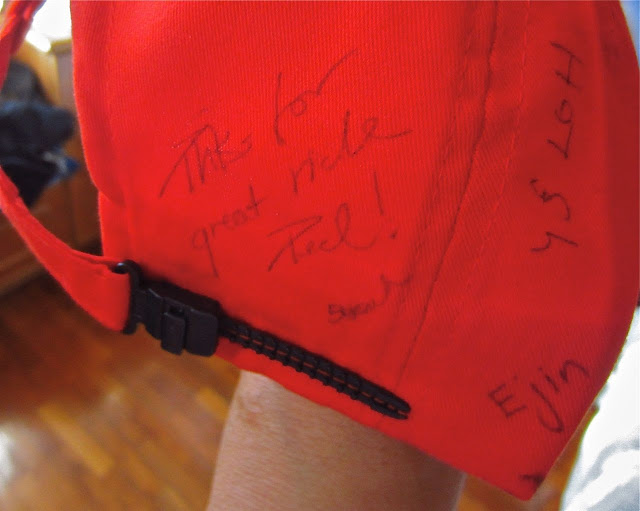 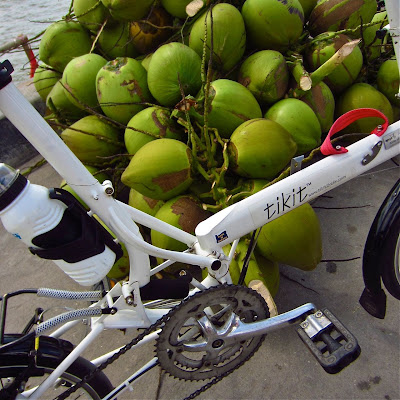 I was very pleased touring with my Bike Friday Tikit. Although it is a commuter like the Brompton, it is fitted with double chain rings so that it can tackle the hills better. With its high pressure Kojaks, it really ate up the miles though one must be careful in the wet. It helps that it has full fenders and can take my Orteleib pannier with no issue.  With my trusty B17 Brooks to assure all day comfort, I must say this is the Tikit to tour. 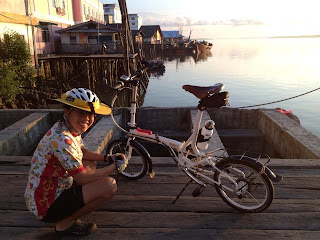 Pic Cindy
Posted by Oldyonfoldy at 9:11 AM