1st RPL ride - a most special time of cycling and solidarity 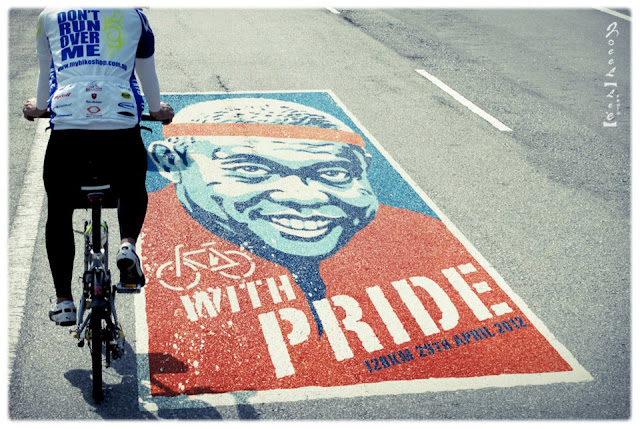 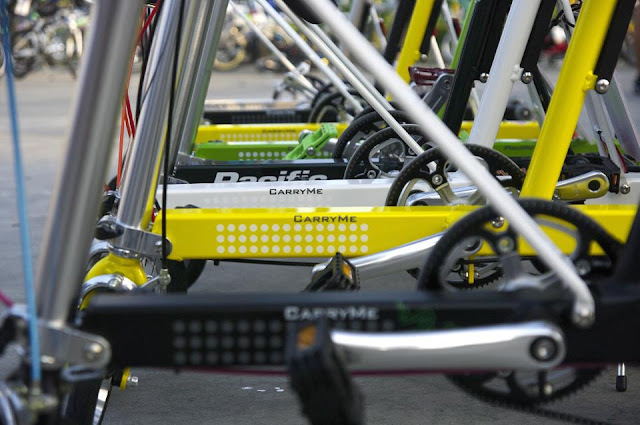 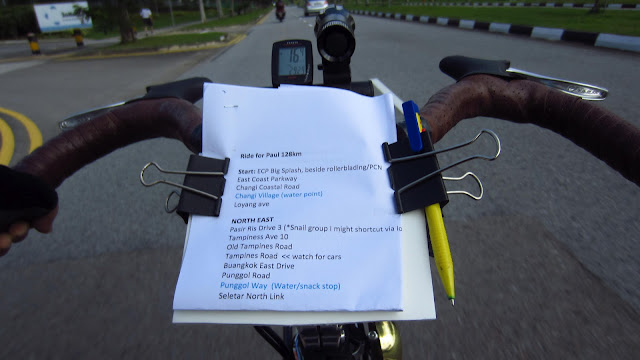 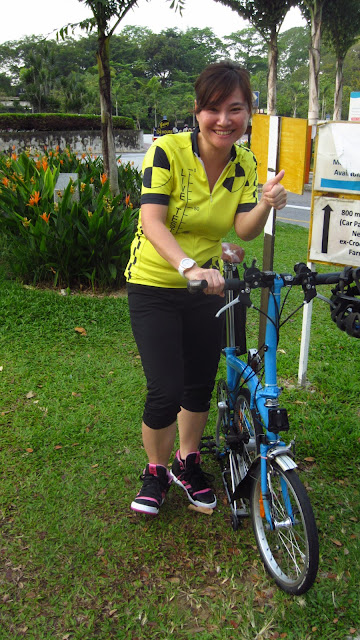 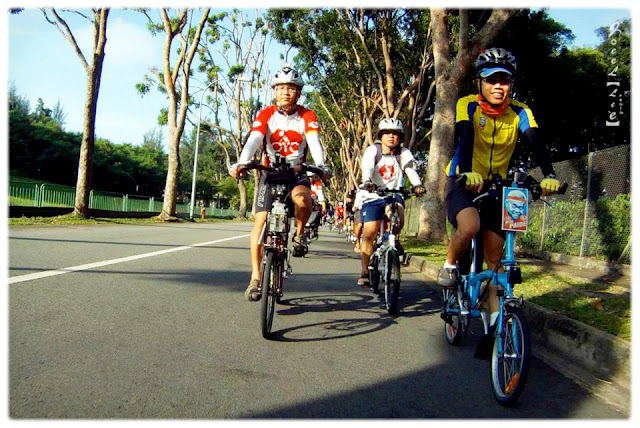 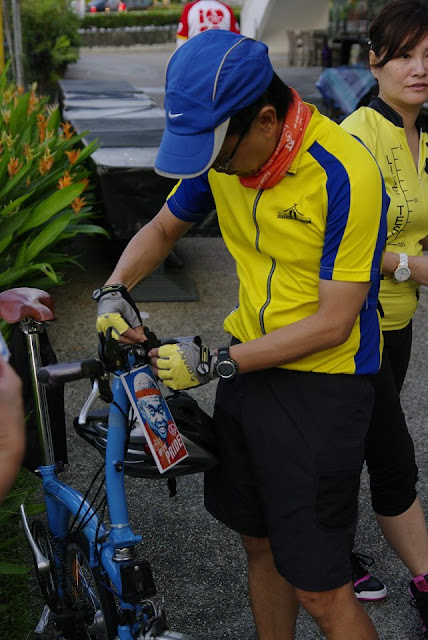 It was TW's idea some months back to do something significant to remember and honour the late Paul Lim on his 1st anniversary. I was absolutely delighted that he decided on a long ride around tiny Singapore, 128km to be precise. This stirred the hearts and interest of so many that we were quickly oversubscibed with 90 registered cyclists and a few more. 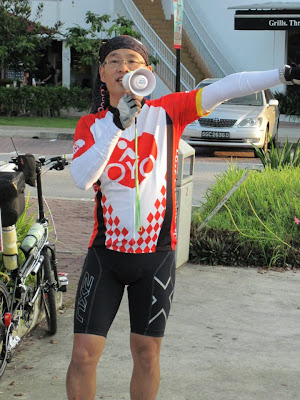 I was asked to ride Paul's blue Brompton with the S-handlebar and felt very honoured to ride this special bicycle. Reflecting much of Paul's need for speed, this British commuter was equipped with Stelvio light hi-performance tires and a Brooks sport saddle that absolutely did not agree with my bottom. The last time it was ridden was by CW on a Ride of Silence event nearly a year ago so it was pretty dusty and had no air in its tires when I picked it up a day before. 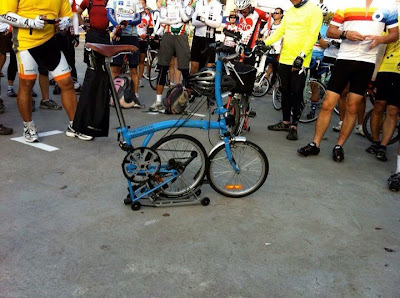 At 0640, I went to get Sandra, Paul's wife to Big Splash, East Coast Park, our meeting point and picked up Christoph as well. It was to be his first long ride on his brand new Bike Friday NWT. I was so glad he could join us as we have shared many happy times together on the saddle. 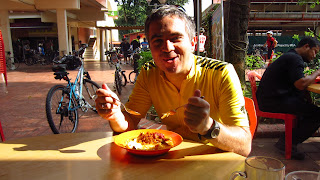 It was nice of Cil to play chauffeur for us. It was a carnival like atmosphere when we got there with so many old and new friendly faces. Mary and her team were so efficient to process us and made sure everyone was put in one of the 5 cycling groups consisting of about 20 each. 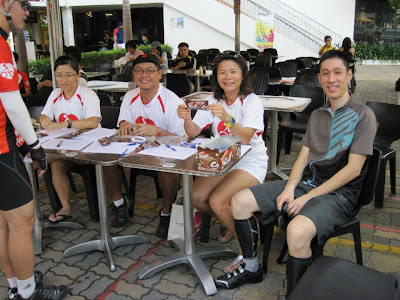 What was impressive was a bunch of 9 riders attempting it on micro Carry Me bicycles led by a fiesty young lady Ro. Paul used to ride one of these and out ran even a Speed Pro once. 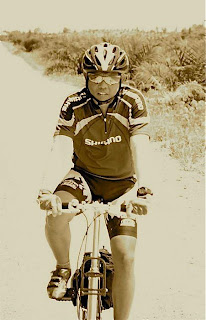 At the opening speech, I expressed my deep gratitude to so many for their time and support and wished them God's blessings for a safe and fun ride. It was also important to use opportunties like this to make special memories for one another, old and new friends. 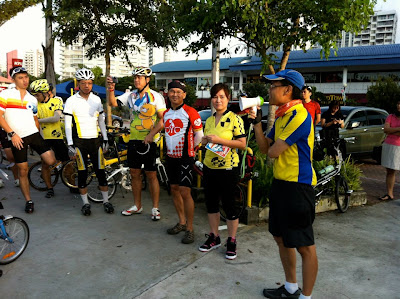 Sandra was the VIP to flag us off but I was so excited to start that I went off prematurely! It was rather embarrassing to have to do it again. 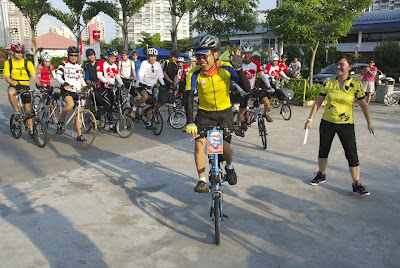 Many were moved by her strength and faith in picking up the pieces for her family so well and with his joy, touched the hearts of so many who were there. Indeed God's favour was with us and we enjoyed a most brilliant day weather wise, cloudy and breezy with just a bit of rain to cool things down. Paul must have pleaded hard for us!

I rode in Group 4 led by Taiwoon and enjoyed catching up with this amazing and energetic friend. The first 20km felt like a typical Sunday ride along the beautiful East Coast park and it ended so quickly as we laughed and chatted on our bikes. 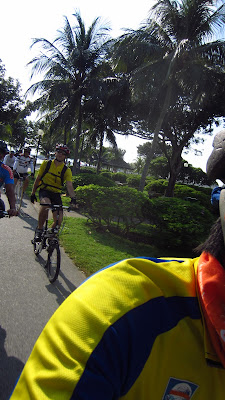 He took pity on my bottom as Paul's special Brooks really gave me a hard time, and we swapped bikes at Changi Village after a short break. TW was immediately impressed with the speed of Paul's Brompton but after 10 minutes, his bottom too started to protest. I on the other hand, was on his ultra plush Pashley TSR with unique front suspension system and Brooks B17 that ironed out any road irregularities effortlessly. It was like riding on a Rolls Royce and I deliberately enjoyed going through bumps. We cruised easily through Pasir Ris and the magnificent Punggol Waterway Park. Christoph remarked that he has not seen such a beautiful place to ride in Singapore and I concurred wholeheartedly. 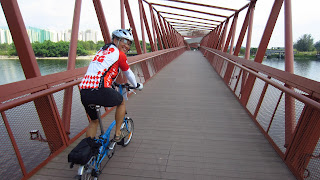 We had our second break at Punggol and this time it was Christoph's turn to ride the Brompton. It was a match made in heaven as the shape of his bottom somehow fitted Paul's hard seat like a hand in glove. He was absolutely impressed that the Brompton was so fast and responsive and truly enjoyed riding it. TW and I were not complaining as he had a chance to enjoy the NWT's famed touring abilities and this bike is just built for long distance riding. I was still on the limo TSR and was grinning from ear to ear. Yishun Dam came up quickly and we could see Johor across the Straits of Singapore. It was amazing how much progress we were making! Traffic was very light this Sunday morning and we had the best sweepers in Andy and Darren to guide us safely through intersections. 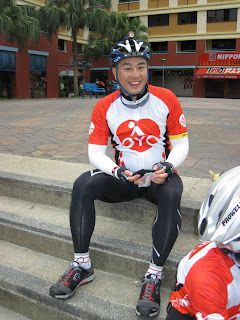 All this time, we were concern for our Carry Me team who started off last and it was worrying as news about their progress was scarce. At our water stop in Yishun, still no news. The 7/11 we stopped had plenty of signs of Group 3 where so many empty bottles of drinks and 100 plus laid neatly on the table. TW was sharp enough to spot a pair of gloves so if you have lost it, its your lucky day! We soon reached Sembawang and thereafter Woodlands and it was so encouraging to see Uncle Teo drive by in his lorry. He pulled over and distributed ice cold drinks for all which really lifted our spirits up. 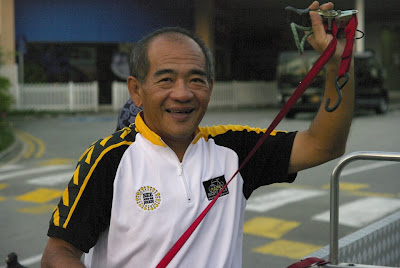 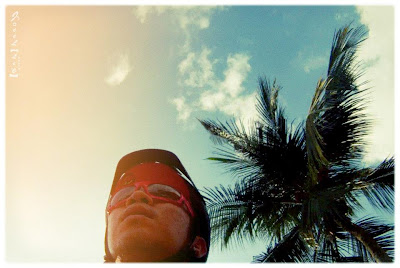 At Kranji, we stopped for our lunch and it was so nice to meet Group 3 led by Louis. Our presence must have given them some healthy pressure and it was so fun to exchange notes and catch up. I was blown away by the generousity of Hardy of Bicycle Spa where he distributed fantastic home made ice cream to all as an after lunch dessert. I had to go up to him to shake his hand as he drove all the way in this boondock part of Singapore to ensure we were well taken care off. Just as we were going to take off, it started to rain and this was so welcomed as it did an excellent job of cooling things down.

I swapped with TW again, this time riding the NWT and loved it. I immediately appreciated its lively and responsive ride! 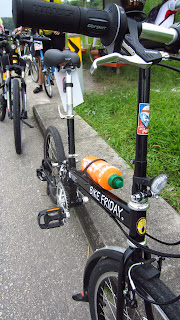 It was fun riding along the quiet and shady Neo Tiew Lane but it was here that my right knee started to act up a bit unfortunately. Along Chua Chu Kang highway cum emergency runway, Uncle Teo showed up again in his lorry and it was great to see him. He had backtracked to see if he could find the Carry Me team but they were nowhere to be seen. We found out later on that they took a slight diversion as they were caught in the rain and ended up at the finishing point faster than everyone else though they only did 82km, which is a very respectable distance on 8" tiny wheels. 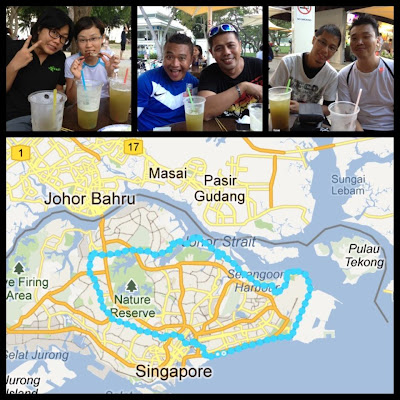 I was warned about the slopes at Nanyang Tech Uni but ended up wondering if we actually did it. At our regrouping point, I asked where this climb was and was told we had completed it, much to my surprise. It was then that I realised that our recent climb 3275m to Wuling in Taiwan really made all the difference and changed my perspective forever what a real climb really is. But my knee was protesting and I had to go a bit slower at this stage.

At the drink stop near City Harvest Church in Jurong, we once again bumped into Group 3. This time they merged with Group 2 and it was quite a sight to behold with so many friends and bikes parked everywhere. Fatigue was starting to set in and some even had cramps. I was glad to chat with Gary, another fellow Bike Friday-er and this was his first super long ride. Was so proud of him. By this time, we had clocked 86km but our spirits were still so high. I enjoyed a local burrito called Popiah and we had drinks aplenty.

It was then back to the cycling, this time the industrial part of Jurong along Jalan Buroh. I was grateful for excellent navigation as I would be hopelessly lost in this part of the woods. We stopped at a SPC station to cool off in the aircon shop and I got a much appreciated ice cream treat from Christoph 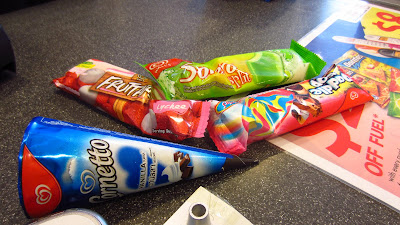 It was a nice ride here as we had to cross over 3 bridges on this quiet highway and as a team, we hit some very decent speeds.  I found out that I was not the only one with knee pain as Bless on her new Brompton was also suffering understandably as this was her first ride past 60km.

We arrived at McDonalds West Coast at just before 4pm where Peter was waiting for us with cold H20 drinks in his black SUV. I was deeply touched by the kindness of all these friends. Peter had wanted to join us but was recovering from a recent fall. Here, Uncle Teo was also at hand this time to rescue a young lady on roadie whose legs were buggered. She walked with a limp and had to call it a day. It was here that Christoph and I called it a day too as this was near our homes. We had planned to ride for only 40km but ended up 100km!

By this time, George leading the lightning Group 1 had already arrived at Big Splash ECP, a good one hour ahead of anyone. I missed out on the delicous soyabean jelly dessert that Mary and her team bought to welcome those who completed the 128km. To say that this day was a big success is an understatement. All of us had barrels of fun but most importantly, we did it for our dear friend Paul who would have loved to join us today. The Remember Paul Lim Ride brought so many of us together doing something we all love so much. It build many bridges of friendships with people from all walks of life. Indeed if anything, Paul's life continues to inspire so many of us. 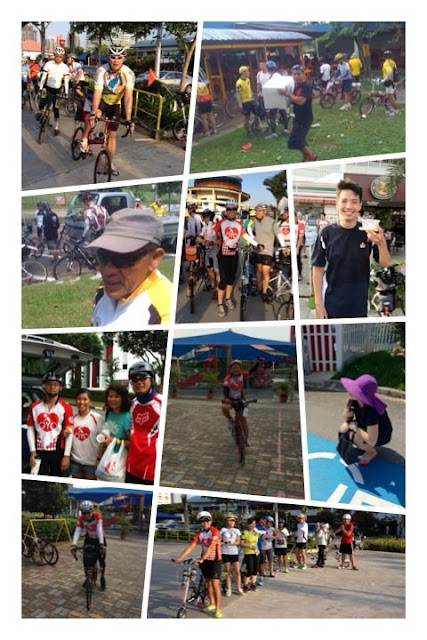 I asked TW if we could do this again next year and was met with a promise that it will happen. I really admire this dear friend for his selfless spirit in helping all of us enjoy friendships on our bicycles and my grateful thanks to Kim and Momo for allowing him to serve us this way. 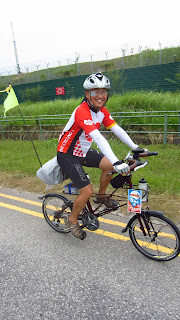 So thank you Paul for blessing us with your legacy, still so fresh in our hearts. Sandra's words to him on his Facebook page provides a most fitting close to the end of a very special day indeed.

"Today must be your happiest day as you saw so many of your friends ride 128KM for you and almost all of them made it to the finished point. I am sad that I could not do this for you... you know I am not a long distance rider. I know you love to do marathon too, so I have registered for the SunDown for you... but I can only do the 10 km run for you... your turn to watch over me! The boys will definitely join all these uncles and aunties on their next cycling event!"


I tell you the truth, unless a kernel of wheat is planted in the soil and dies, it remains alone. But its death will produce many new kernels--a plentiful harvest of new lives.   The words of Jesus in John 12:24 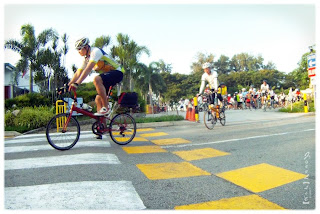 Posted by Oldyonfoldy at 5:16 PM