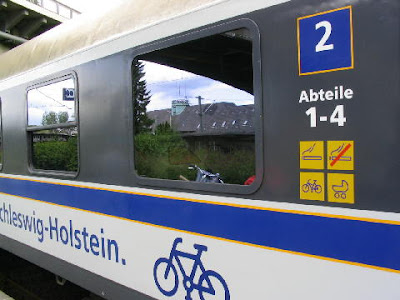 No worries if you have a Bike Friday Tikit in a suitcase... ok ok, there is a 10 min assembly time.

The Singapore Government have too often been accused of not listening to its people and been criticised for its archaic "Father knows best" attitude when it comes to making public policies. But splashed in the news today is the announcement by Transport Minister Raymond Lim that folding bikes will be allowed in trains and buses for a 6 month trial period. This is in response to discussions with focus groups and is certainly a step in the right direction. Kudos Minister Lim!

"Responding to this, LTA together with the public transport operators will launch a six-month trial from March 2008 to allow cyclists to carry their foldable bicycles on board trains and buses. LTA will also work with NParks and other agencies to leverage on the park connectors to enable cyclists to get to public transport interchanges more easily. Bicycle parking facilities at the MRT stations and bus interchanges in housing estates will be improved."

At the risk of sounding like a broken record, more people on bikes will certainly ease congestion, lessen pollution, burn less oil and make for a healthier populace. A greener Singapore for sure. I've been bringing my foldie through the MRT for a year without any problems so far, but my anxious heart always skips a beat when I pass the ticket turnstill. Now, I can go through with a confident broad smile.

Meanwhile, downunder in Melbourne, Victoria's Transport Minister Lynne Kosky just banned bicycles from their overcrowded trains during peak hours this month. It was a band-aid solution to a massive problem of overcrowding in trains. Certainly dents its "most liveable city in the world" image. Fortunately, the bicycle advocacists have been lobbying hard and it may very well be overturned.

It will be interesting to see if the Singapore commuter will jump onto the foldie saddle with such enthusiasm to the extend that it starts clogging up our trains/buses. And if it does, I'm confident that "Father" has something already in store.
Posted by Oldyonfoldy at 6:33 PM