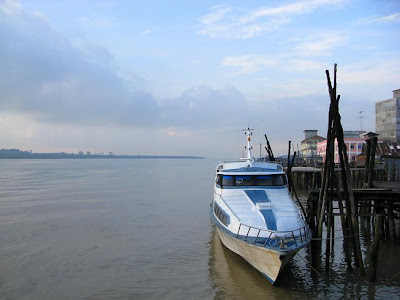 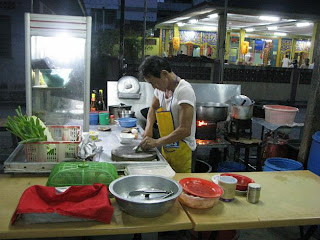 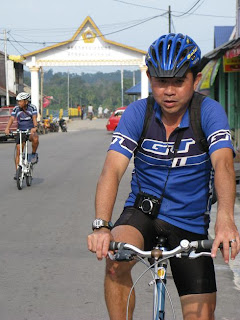 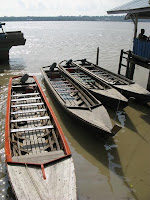 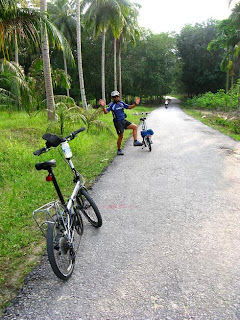 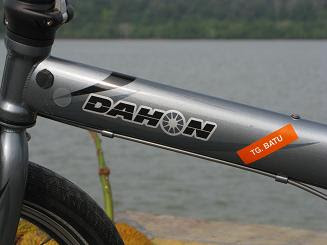 Tanjong Batu, the main town of Kundur Island, charms me with its quiet old time character. It's hard to imagine that this region few hundred years ago was once the heart of the Malay Sultanate with European powers jostling for economic privileges. Its a 3 street town whose life centers on its small harbour and supporting businesses. Old and rusted Dodge trucks from the 60s still carry goods to and fro from docking boats. For some strange reason, the seedy industry seemed to have disappeared and we were glad for that.
.
Since the cessation of the direct ferry from Singapore in Nov 07, its very much a local affair with very few tourists. We checked into the best hotel in town, Hotel Gembira. With only a 10% occupancy rate, our foldies and us were showered with attentive and courteous service. That plus only 190,000R (or about S$28) for the suite resulted in 3 very happy campers.
.
If you are Teochew speaking, going to Kundur will be like visiting your old kampong as the ever friendly Chinese locals will welcome you with open arms. Great food offered at even greater prices. We were pleased to find the best Wanton Mee near our hotel and for breakfast, we could not believe local delicacies like Kway Chap, Chai Tow Kway, Chok, Noodles & Soya Milk were available.
.
But what won me over were the great cycling roads around Kundur Island. Nearly zero traffic save for the occasional mopeds and ojeks (van taxis) cruising pass us slowly. Urung, an even smaller coastal town 18km north, was a pleasant discovery during our afternoon ride. We were blessed with wonderful cool weather - overcast with a very light drizzle. Plenty of rattan panniers for mopeds were being unloaded at the jetty and we had fun trying them out for size on our bicycles. The adventurous streak in us took us westward another 14 km across the island. Even quieter roads with small rolling hills made the ride magical. Some parts of the roads were pretty bad with huge pot-holes and washed out roads but that only added to the experience.
.
We then headed back to town just at the last minutes of sunlight and finished the 46km ride with a sumptous dinner at Ah Kun's homecook "che char". He came highly recommended and seeing the masterchef skillfully handling the wok with leaping flames only added to the delight of our dining experience.
.
All that riding made us truly famish and we headed off to the Pasar Malam for supper after a much needed shower. Finishing off a great day with a $6 massage to soothe aching muscles ensured that I slept ever so soundly - even though I forgot to bring the much needed ear plugs. A necessary apparatus needed to help survive the night in the same room with 3 tired guys.
.
What a fantastic discovery for 2008 indeed!
Posted by Oldyonfoldy at 6:52 AM