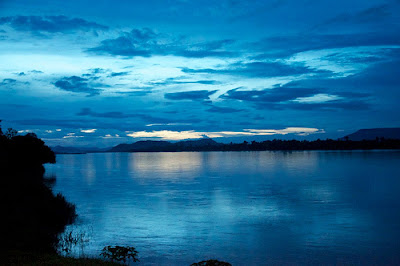 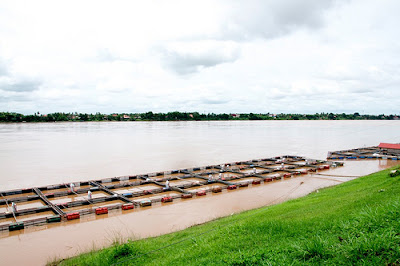 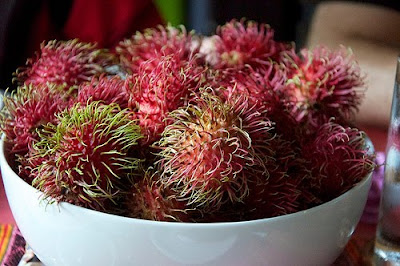 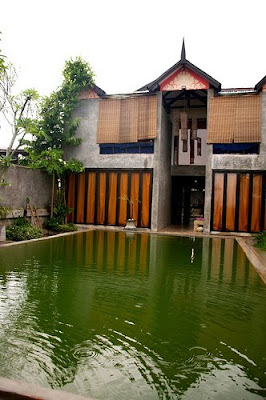 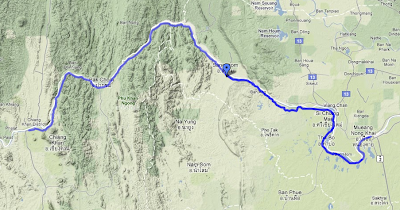 Breakfast was 745am and everyone was up way before that. Tiger prepared a special breakfast - a hybrid of Vietnamese roll with egg, pork and veggies which was the perfect start of the day. 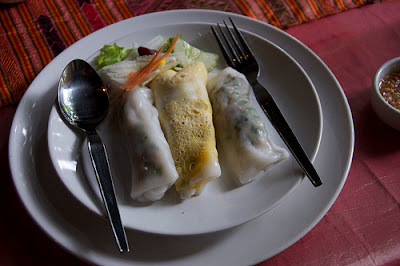 It was still raining a little but that provided for a very cool 9am start. Christoph aka BMW don his special wet weather footwear, all ready to pedal away. Having done countless tours before, this ride was literally a ride in the park for him thus his choice of a simple 3 Speed Dahon Curve! 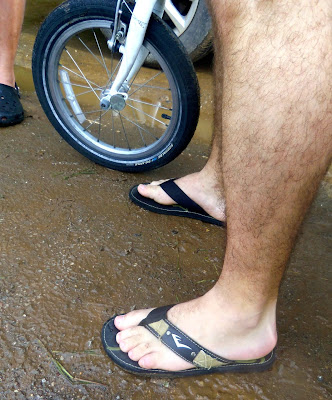 Our route was to Sri Chiang Mai, some 45km away and then to Sangkom about 90km. The first few kms saw us made a lot of stops as we had to adjust our bicycles - panniers, handlebars, seat height etc but once all that got sorted out, we were making good pace. Following Route 211 was easy as we glided past the magnificent Friendship Bridge to Laos. 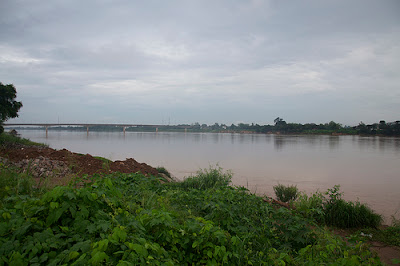 69 yo Uncle Ken was by far the friskiest rider and we had to put a leash on the "young" man. 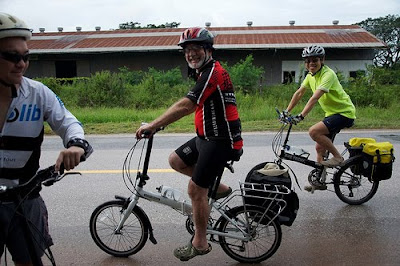 The scenery improved slowly as we left the town of Nong Khai and entered the agricultural centre of Issan. Rich green rice fields, fruit trees and small Bans (villages) where friendly people waved us on. 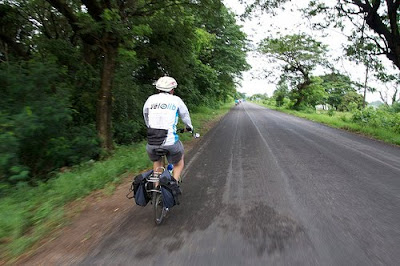 Our morning tea break was at Ban Tha Bo, where routes 211 and 2020 intersected. We sheltered under huge umbrellas, slurping away hot noodle soups and provided lots of entertainment to the locals. 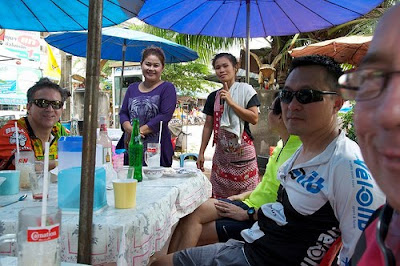 The weather couldn't be more perfect - dark clouds but no rain resulting in very cool weather.
We continued our journey and took the quieter backroads, led by Christoph who did this few years ago. It was serene and tranquil as we moved quietly, stopping from time to time to soak in the sights. 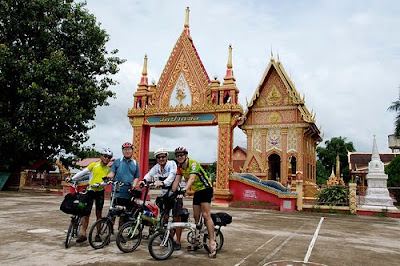 We made Sri Chiang Mai just pass noon and stumbled upon a small eatery that served the best Pad Thai (fried noodles) ever. That was supplemented with more food from Christoph as he wandered out to return with grilled chicken, fish and the famous papaya salad. We gorged ourselves silly and that made it hard to get back on the saddle. 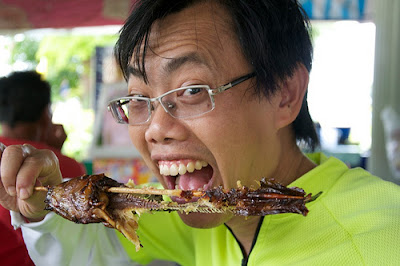 It didn't help that the sun was starting to blaze down on us but we persevered. Riding under lush green trees gave us a much needed relief and we enjoyed being in the canopy of leaves. 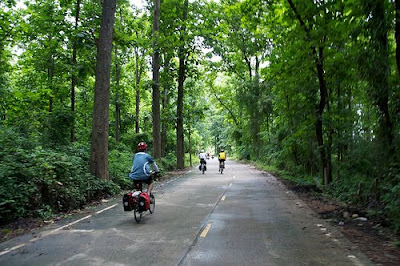 We took the backroads as far as possible until the roads became too broken and rough. Here, I was very glad I had fattish 2.1 touring tires that made it a breeze compared to those using skinny road tires. 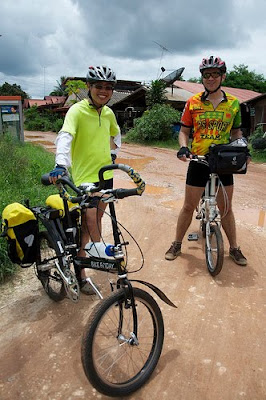 Back to the main road, it started to go inland a bit and hills started appearing. I was told that it was a flattish ride but it was not something that was too much of a problem. What goes up must come down eventually so we enjoyed whizzing downhill at top speed to gain momentum for the next hill. I managed to hold on to a farm tractor up one hill and enjoyed the unexpected assistance. That was great fun talking to the farmer's kids and dog! 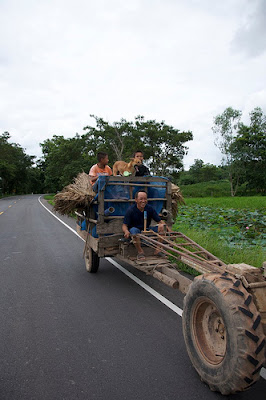 Unfortunately at 25km before Sangkom, poor Joshua lost control when he was flying downhill and crashed. I was coming downhill and saw a couple of foldies parked at the side of the road. His front wheel has somehow wobbled and he went down hard. Joshua took a beating on his helmet which cracked and the left part of his face was bruised. Mike gave him immediate first aid but the crash shocked him and we had to get him to the next town. 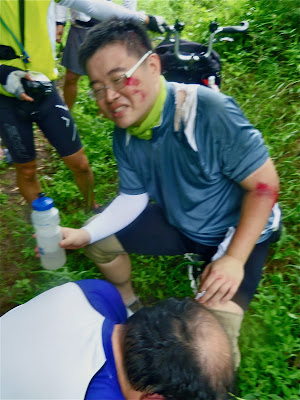 A tuk tuk stopped but tried to profit from the accident by asking a princely sum. Fortunately, a kind pickup truck stopped and ferried both Joshua and Mike to the hospital. The rest of us continued the ride feeling a little solemn and worried. But we had lots of hills to overcome and that was energy sapping. One particular hill saw us pushing our bikes but I barely struggled up on my BF Expedition with the help of granny. 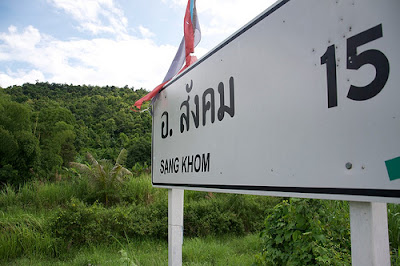 Sangkom finally appeared and it was a beautiful town. We met with the two doctors at a riverside restaurant, relieved that Joshua's injury was not too bad. Mike and Joshua were raving at how pretty the Thai nurses were and Joshua wished he could be warded. We drank buckets and ate like a horse to replenish our bodies. 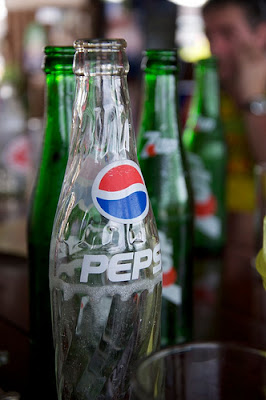 We were pretty spent with the heat and the hills. Christoph's family joined us in their wagon and we checked into a beautiful hotel 2km south of town. The Poo Pae Resort is highly recommended with newish buildings and priceless riverside location. It helped too that the staff were quite friendly and that they had bicycles hung on the ceiling as decoration pieces. 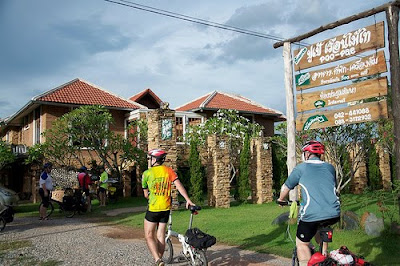 It was wonderful to enjoy a nice warm shower and get into fresh clothes. Both Rod and I immediately had a therapeutic massage which invigorated us to no end.

Dinner was a grand affair and we slept like babies, with wonderful views of the Mekong River flowing lazily by. It couldn't have been a better start to our adventure, especially knowing that Joshua was well enough to continue the next day. 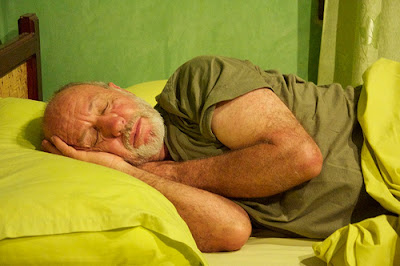 Posted by Oldyonfoldy at 7:15 AM

interesting to read a post w/o images...the visuals somehow forms in front of me! Glad to know everyone survived...helmets still saved life!

This was the day I am convinced on the importance of a helmet.... the sound of metal, flesh, road was just tooooooo scary. So glad everything turn out well in the end.