Exploring the deep south of The Riaus - Day Three, Singkep 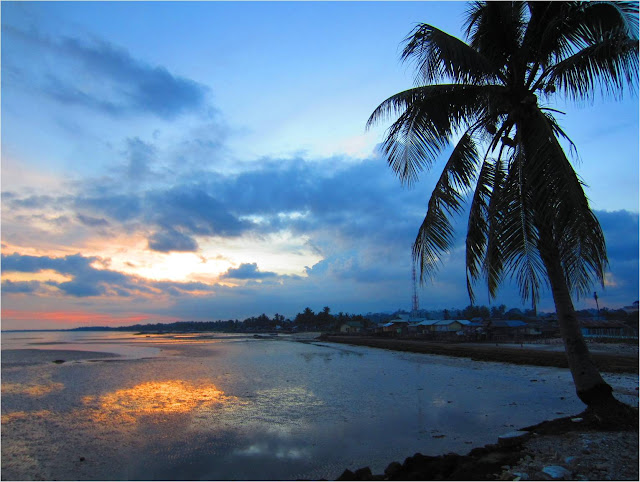 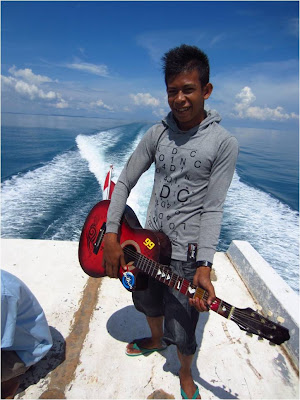 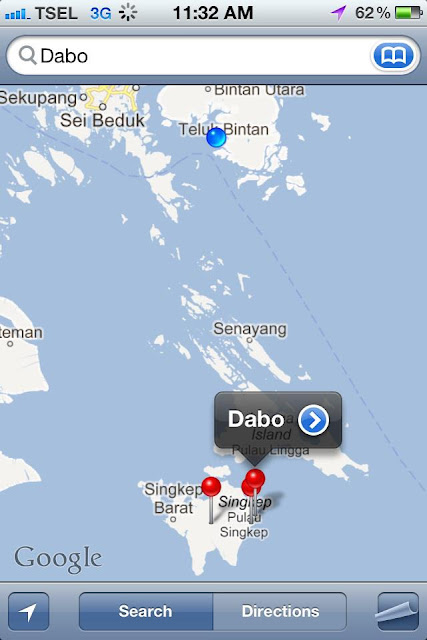 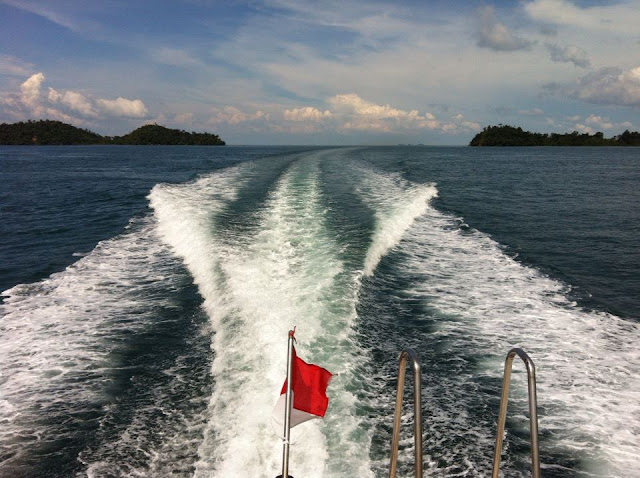 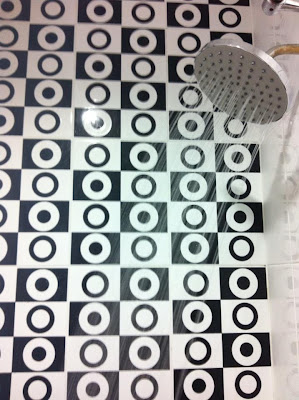 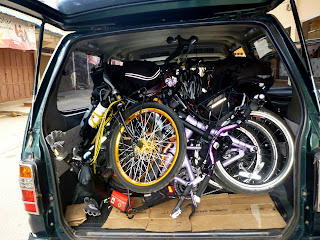 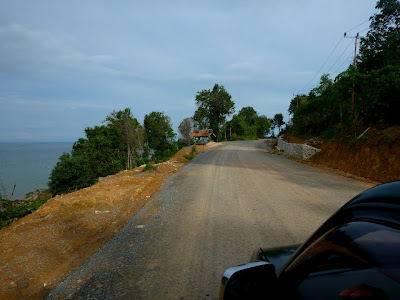 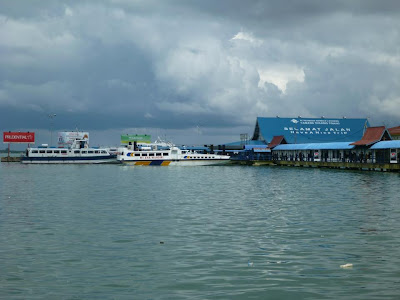 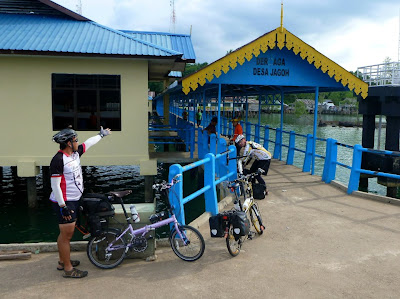 It was to be another wet day when we got up at Ocean Bay Resort after a sound night's sleep. The mission was easy - a mere 38km to Tg Pinang, the largest town and ferry centre of Bintan. Trouble was that we were not sure what to do after that as the information we got about connecting ferries to Galang Island, and onward to Tg Batu, Kundur as well as the ferry to Dabo, Singkep was not current.  One thing for certain was that Christoph needed to return to Singapore from Tg Pinang by hook or crook, as he had to catch a flight with his family to Germany to spend Christmas with his mom the next day. 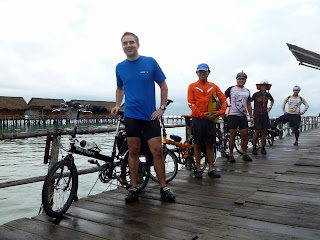 We gathered all ready to roll at 7am for the complimentary breakfast at the restaurant but the staff were nowhere to be seen until ten minutes later. Half boil eggs and toast, with coffee/tea were on offer and that didn't excite anyone. But it provided the much needed prelude to a better breakfast 6km down the road, where the famous Bintan Otak Otak awaited us (grilled fish pate in banana leaves) at Cahaya Warung. As it was still pouring and my cheap rain coat had disintegrated the day before, I managed to buy another rain coat for US$1 from one of the staff. It obviously was used and smelled of dried fish, but beggars can't be choosers. 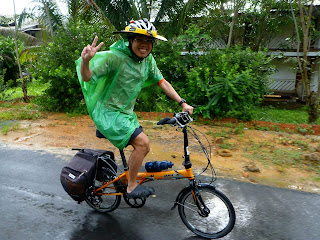 The 6km ride to our Otak stop was very pleasant and the rain trickled down much to our joy. Crossing the familiar bridge at Kawal, I immediately steered everyone right to Otak paradise. These were going for $1 per dozen and is like spicy fish pate, grilled to perfection. Even Storm Storm like it! 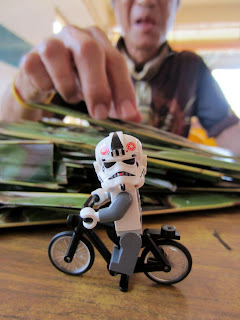 There is much to photograph here as this is a major fishing town and bustling. Even though we wanted to spend more time, we had ferries to catch at 11am and so, we gobbled down our too many Otaks and rode off. 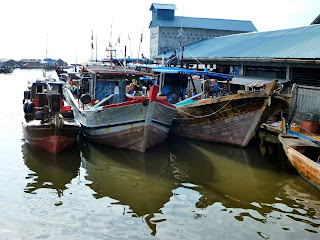 Despite the hotel staff telling us earlier it was downhill all the way to Tg Pinang, we found that wasn't so. I have learned that info given by people regarding directions should not too be taken too literally. The ride was actually tougher than yesterday especially when nearing the town. There were some rather steep climbs that were very challenging. Traffic certainly was much heavier as well. I had wanted to arrive there at 1030am so that we could make it on time for the 11am so there was some pressure to press on. Fortunately being the Dream Team, we ate up the miles in quick time and arrived at the Ferry Terminal after going illegally against traffic at the final stretch. 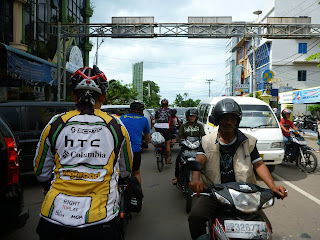 We discovered that we were too late for Christoph as his ferry was actually 1015am but there was another one at 2pm so that was good. After making sure he got sorted out, I rushed to the domestic terminal to see what our options were. It was already 1110am and the ticket sellers were shouting "Dabo! Dabo!"and there was a boat leaving at 1130am. The Galang ferry was due to leave 1230pm. I consulted the rest of the team if they were game to go deep south and cross the equator. It was a unanimous, "Lets Go!!!", Dabo Singkep here we come. I just love the wonderful spontaneous spirit of the Dream Team.

It was hard to say goodbye to poor Christoph who had to leave us, and we exchanged hugs. But because we had a ferry to catch, we had to rush our bikes though the gates and all this rushing was rather fun as we were just travelling on a wing and a prayer. As this was a long 3.5 hr boat ride, wise Matt got us some packet lunches and coffee to go, with dessert to boot. 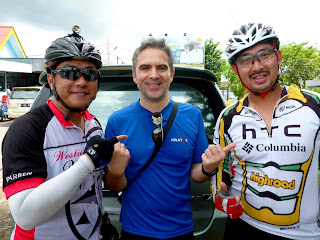 For some reason, the ferry was late and we were approached by an Indonesian journalist on the jetty She was curious to know where we came from and asked us many questions. I supposed we were not a common sight and attracted a lot of attention with the Riau islanders. Once again, the porters took our 4 bikes and loaded it on the roof of the ferry like that have done it for years, and we were off. 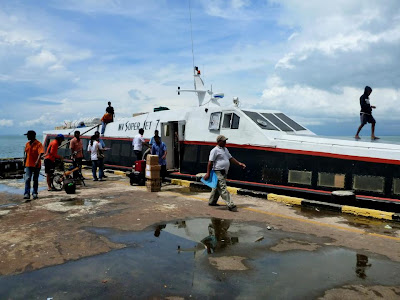 There must have been at least 100 people on this ferry and we found ourselves booked on the first row. Mistake - all the boxes and goods were packed there. The boat was surprisingly stable and fast. There was a music DVD featuring an Indonesian singer with bad teeth and I wondered how he got all the ladies. It didn't help that his dismal performance was on the repeat button. Fortunately, better entertainment was found on the roof deck where the amazing view of blue skies, white clouds and misty islands simply took our breath away. Darren played with the stitched function of his camera and this is the delightful result.

When we arrived at the destination, everyone was in a hurry to exit the ferry except us. I asked, "Is this 'Dabo?" and the crew replied, "Bukan, ini Jago!" For a moment, I was in a panic as I wondered if we caught the right ferry only to find out later that Dabo was a good 28km south of the island. The ferry stopped here as the waters were too shallow. Travelling on a wing, or rather a hull and a prayer cannot get more exciting. 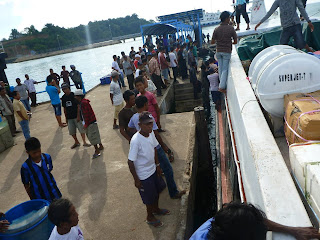 It was nearly 4pm when we disembarked at Jago. Most of the passengers have gone save for a few stray taxis who missed out on their customers. A quick chat in my basic Bahasa revealed that the ride to Dabo was very hilly. Thus, we opted to play safe and decided to taxi into Dabo. The friendly driver wanted US$12 for the trip to town and he had an old Toyota Kijang wagon. If all 4 foldies could fit into the back with us inside, he got a deal! Miraculously, we all fitted in nicely and one more reason why travelling with foldies really rock! Roslan assured us here in this island paradise, there were no baddies. Singkep is one big friendly kampong. 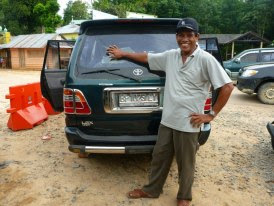 Big and steep hills greeted us as we left Jago and the poor Kijang struggled to climb them, which confirmed the rightness of our decision. The evening drive was beautiful as we skirted the beautiful coast and coconut lined beaches. Roslan dropped us at the Armanda Hotel, opened just 2 weeks ago. It was the glitziest joint in town and we were thrilled that it only costs US$18 night. 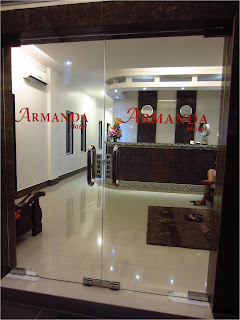 Our rooms were most impressive! Though ours was a bit small, it was brand new, had icy cold aircon and we were surprised to see this in the avant garde design bathroom. 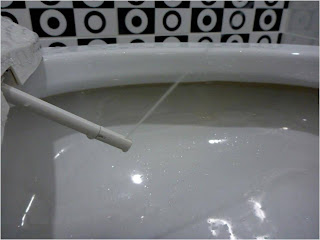 A quick shower and we made our way to the jetty just ten mins walk away to capture the most spectacular of sunsets. It was magically to just soak in the the glorious hues and the living art of a changing sky and setting sun. 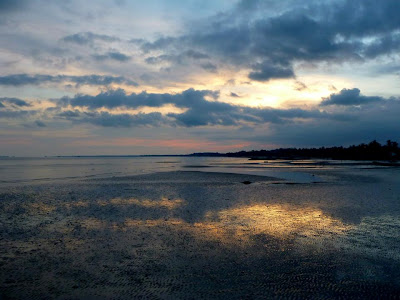 Dinner was taken at Charlie's, a simple warung, just by the jetty. Charlie the owner spoke perfect English and we enjoyed our humble meal of Nasi Goreng there. Our conversations soon attracted the ear of an attractive middle age China businesswoman sitting on the next table who later on struck up a conversation with us. We learn that Ms Jiang lives in Singapore and was in Singkep to check out the mining scene. Both Matt and Darren could converse with her in fluent Mandarin, while KC and I nodded politely. She later asked for our mobile phone no. 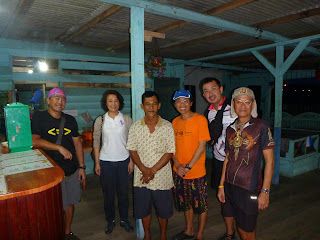 Later on as we were strolling back along the jetty, 2 young Indonesian girls on a scooter greeted us with bright smiles and also asked us for our contact. Darren reckoned it must be his multi-tanned legs that looked like a layered cake, that was attracting all these damsels on this splendid island. What a privilege it was to be riding on the coat tails of such good looking guys in the Dream Team. 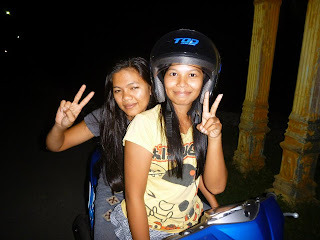 We checked out some of the shops after dinner and finished off with the Rolls Royce of ice creams - Magnums. These sold for half the price in Singapore! Our last stop for the night was to have coffee at Smoky Joes. Well, that is our nickname for the coffeeshop as everyone was puffing away. My life must have been shorten by a few weeks! 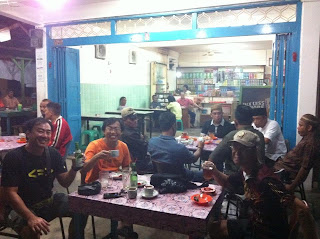 We retired still in a state of amazement that we have actually crossed the equator, and ended up in the remote island of Singkep. What a wonderful day it has been indeed, adventuring with the Dream Team though we missed our German member.

Daily ferry leaves Jago for Tg Pinang at 730am. There is also another ferry that leaves from Jago to Batam at 8am, probably Telaga Punggur, but I have to confirm that.

Tanah Merah Ferry Terminal in Spore has daily connections to Tg Pinang at 850 by IndoFalcon.
Posted by Oldyonfoldy at 11:21 AM

exciting esp when u dont really know where u heading. With the right company.. it doesnt matter. Ride on , Write on sir!

This must have been the most exciting day, like a page taken out of a James Bond movie. Fast bike ride, fast boat ride and island girls flinging themselves to Darren. Haha...

Unexpected adventures are the best...including being asked for protection money haha. Sometimes, you have to act tough when the situation demands it. Good of Matt to keep the confidence.