Cycling anti-clockwise into the doldrums... 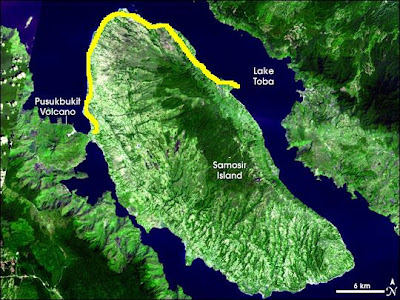 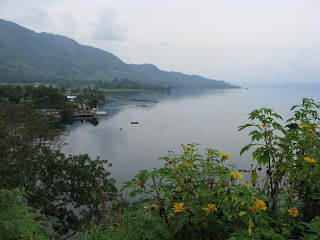 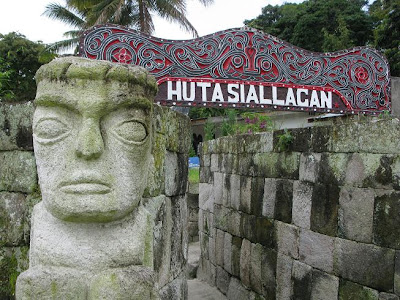 Entrance to the King's "Kitchen" 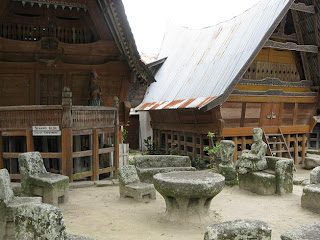 Many heads were put on this chopping block 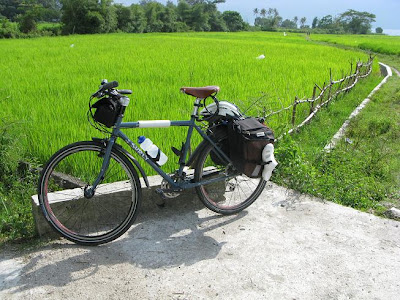 No shortage of rice here! 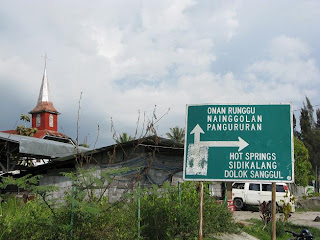 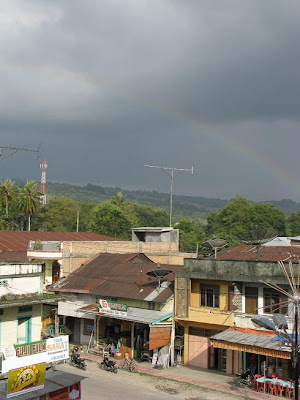 A vivid rainbow to brighten a dull town

It took us 42km to cycle the top part of the 120km permimeter of Samosir Island to reach our destination on the west side, Pangururang - the admin centre. Quiet roads that mostly hug the coastline with views of the the lake, the highlands and the low lying clouds. We visited some ancient royal sites where the old Batak Kings would lop off the heads of their enemies and eat their bodies ritually not too long ago. Raffles and Marco Polo seem to mentioned this as well. Its unimaginable the Bataks are better known now for their melodious music and their Christian faith.

Was delightful to pass through small villages where people shouted the traditional greeting "Horus" ever so often! Once again, the number of churches even in the remoteness places caught my attention.

The town of Pangururang is supposed to be the government hub of the island but it was pretty pathetic in very sense of the word. The best hotel we stayed in featured squart-style toilets -enough said. There was not a single place for a decent meal. Everything closed real early too. At least, I could get my hair wash and pampered at Betty's Beauty Saloon for 20,000 Rp ($3). Here, we bumped into a young Nicholas Cage lookalike policeman who seemed better suited as a male underwear model. He was fascinated with our cycling adventure and Chris was making all sorts of eyes at me while we were talking. Interesting, to say the least.

At night, we wandered around and stumbled upon a most beautiful new church right at the lake side. The Pastor, a dark Batak warrior built gentleman impeccably dressed in a dark full suit, took time to chat with us. He proudly said that there is 4 million Batak believers in Sumatra and they even had missionaries in the USA and Singapore.

That enlightening conversation compensated a little for the doldrums offered at "Nothingsville" Pangururang.
Posted by Oldyonfoldy at 5:21 AM