The cycle of Heaven and HELL - Pt 2 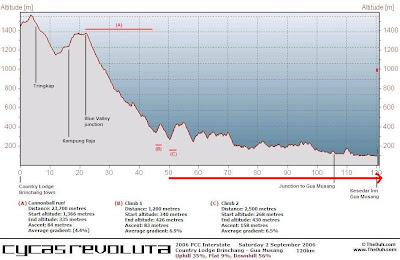 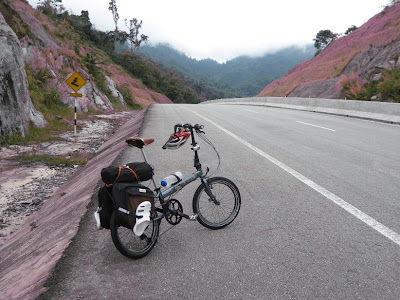 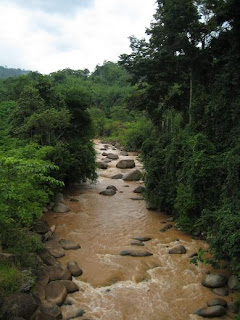 The heart of the Taman Negara jungle 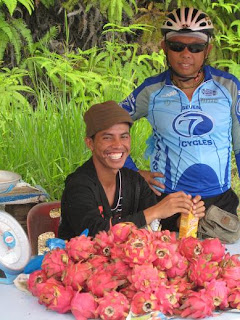 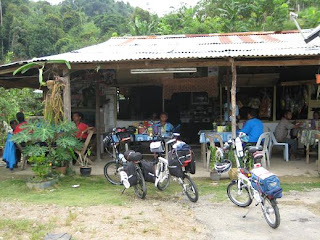 Salvation #2 - an oasis in the wildnerness, 75km point 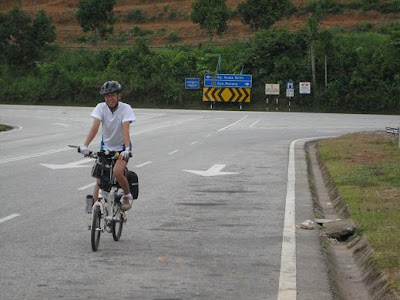 End of the torture - GM turnoff

What goes down must come up...

This summed up the rest of the 70km route. 1km of downhill followed by 1 km of climb, repeated at least 40 times - like a heart-rate chart! The rolling hills caught us unprepared and the very limited gearing of our foldies translated to excruciating uphills. The basic idea was to attack the hills with a powered descent, hoping that the momentum will help ease the struggle. But after hill #25, we had no more strength left and simply glided down the hills, pedalled until the bike could not move, then began the long push up the hill. Even iron leg Paul, who could overtake a slow climbing timber lorry at the early stage uphill, soon succumbed to fatique.

The torture saw us consuming more water than we planned for and we soon ran out. Thoughts of folding the bikes and begging for a lift from some good Samaritan flashed temptingly like an oasis in the desert. Pushing the bike up painfully each hill with aching legs, I began to appreciate why people who did this route had a support vehicle. With no mobile phone coverage, we could not call for help if we collapsed. The sight of 2 dead dogs with flies buzzing around as I passed it saw me wondering if that was going to be my fate too. I was a defeated man in every sense of the word but thanks to the encouragement of RW and Paul, and the great shame of a failed trip, we gritted our teeth and inched forward pedal by pedal, step by step.

Miraculously, a fruit stall appeared out of nowhere. The mercy of God! Fresh pink dragon fruit never tasted so good and we devoured them immediately. It started to drizzle and this was so cooling. The seller asked why we did not simply take the bus. We smiled. The much needed refreshment gave us enough strength for another 10km.

Then the torture began - again. This time, left leg began to cramp up and fortunately, some Counterpain Gel did the trick. It did not help that we have descended to 200-300m, gone was the cool air forever. As we fought the losing battle of the hills once again, our spirits and bodies were fading. I was coasting down hill #? wearily in a semi-conscious state when I saw Paul waving with a big grin. At 75km out of nowhere in this "highway of wilderness" was a small wooden hut selling ice cold drinks and food. Jehovah Jireh - God the Provider intervened again! I was so delighted that I charged into the dirt entrance road at full speed and did a rear wheel skid turn, in joyous celebration. Ice cold pineapple juice, creamy hot tea, instant noodles with egg - it was the best RM$7 spent ever. A truck full of Tenaga workers drove in and looked at us curiously, wondering what possessed these 3 mad fools to attempt such a ride.

The replenishments really gave us the boost needed and the turnoff to Gua Musang soon appeared. We rode the other 16km to town briskly, surprised at our newly found energy. The sun was setting, marking the end of our day in hell and we were so glad.

Tired, smelly and grouchy, we rode into town on our little wheeled bikes in the dark. A great meal of rice, wild boar, pork & peanut soup, eggs and bean sprouts did its job splendidly to nourish us. We managed to get the last 2 rooms at Fully Inn, the best hotel in town and collapsed into our beds gratefully.

We have been through heaven and hell in one day and survived to tell the UP and down tale of 3 crazy foldies, finishing 115km in 10 hrs! Though we've earned our stripes deservingly, perhaps even foolishly, we WON'T be doing this again for a long while. Until amnesia sets in ...
Posted by Oldyonfoldy at 11:34 PM

That much suffering meh? Not to be left out, I clocked 160 kms on the Trucker, Mon - Wed.

Believe me it wasn't easy or scenic going around flat flat S'pore.

The trip would be much easier done on a "Shirley" but tak boleh masuk bus or kereta api la...