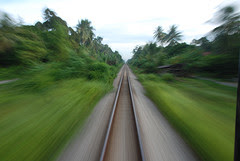 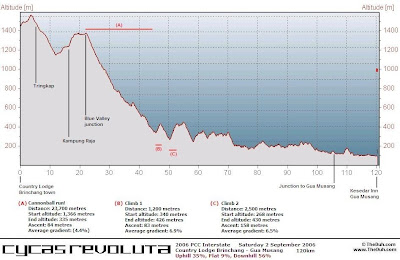 So you like downhills? This should satisfy you! Thks to F Tang for sharing this map. 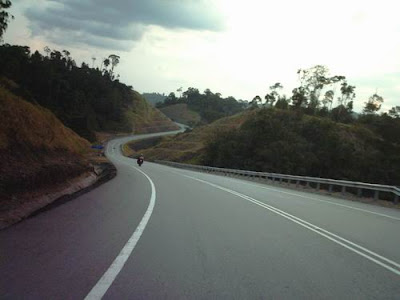 The long & winding road - a joy to ride?

In about a week's time, 3 foldies will be descending from the peaks of Cameron Highlands down into the heart of the Taman Negara Rainforest. This largely downhill descent is 120km and is along one of the newest and deserted roads of Peninsula Malaysia. I've been talking and dreaming about doing this for nearly a year now, and its just had to be done.
The plan is to catch the night bus from Singapore 500+km north to Equatorial Hotel, Brinchang, Cameron Highlands. Spend the day enjoying the cool mountain air and then begin the ultimate descent of 1500m at the crack of dawn to Gua Musang. Return is via the famous *jungle train - and due to the bus and train travel arrangements, the folding bike is the only way to go here. Tour buses aren't very friendly to have full size bikes in their belly and trains certainly won't allow full size bikes in the passenger cabins.
This promises to be one heck of a downhill ride as can be seen on the altitude map so it should be fun, exciting & challenging. Stay tune...
.
*.Traveller Henrik Meurs took the slow jungle train from Gemas to Wakaf Bahru. He writes: "The trip on the Jungle Railway to Kota Bahru is one of the most beautiful train trips possible. The scenery can only be described as breathtaking. There are quite a few stops during the first two or three hours. After that, villages become rare and the train starts climbing the first flat mountains. From then on we enjoyed endless views over primary rain forest, large trees interrupted by exuberant plants and monkeys at play. After 4 or 5 hours, when you just start to think that you might have seen all the wonders the Malaysian jungle has to offer, the train enters the mountains. Words fail me to describe the beauty of the scenery of these two or three hours during which the engine pulls you through the mountains topped with rain-forest, over wooden bridges and through narrow gorges. The fare was just 21 Ringgit, about $5..!"
.
http://wikitravel.org/en/Jungle_Railway
Posted by Oldyonfoldy at 11:09 PM

Hi oldyonfoldy, your "old" energy is breath-taking! You tempt me to take the Jungle Train next time I am back in your neck of the woods. I love trains (most of the time).
Jie

Well, I hear the train may not be aircon so let me check it out and get back to you Jie. All the wonderful scenery isnt going to count for much if one is sweltering in the Malayan heat :)

Confirmed! The train is airconditioned. The view is splendid but do bring your own food. We were in the train for 12 hrs and only had snacks...