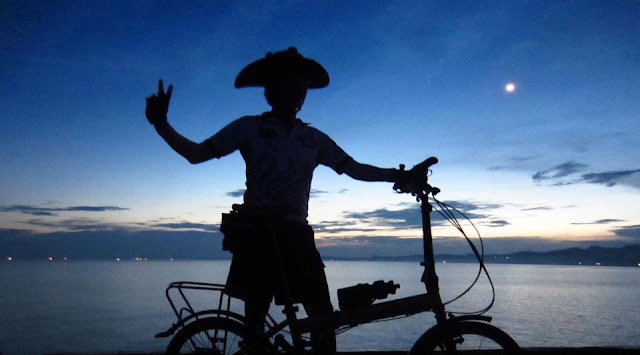 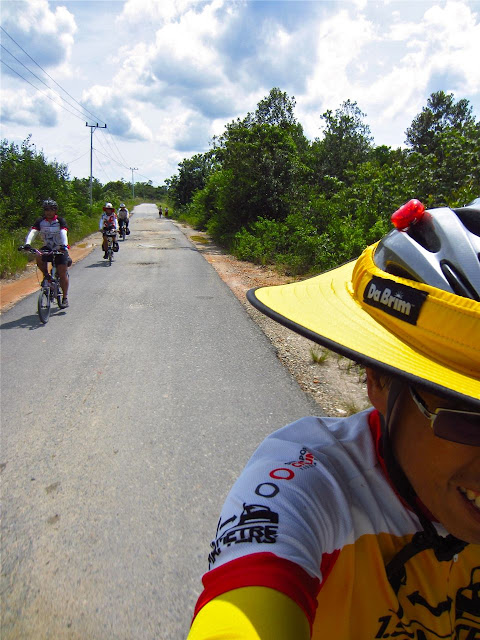 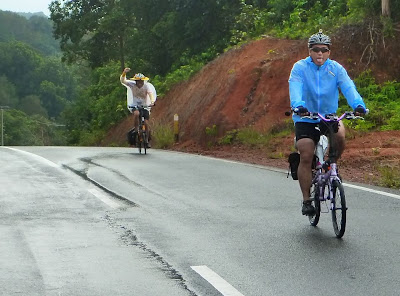 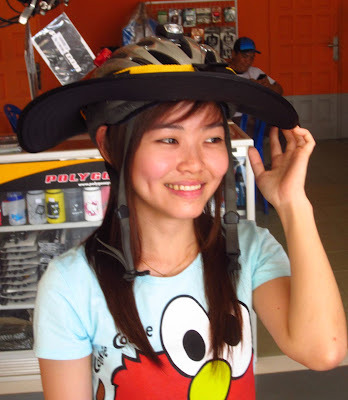 Like a Brooks saddle, some products get better with more use. Our Dream Team adventure to the Riau Islands of Indonesia last week was the perfect testing ground for my Da Brim. As an avid tourer, the litmus test is whether its just a gimmick or is it really something that adds to the touring experience.

My initial problem with the Da Brim was that after 30km/h, I had a Mary Poppins encounter but it was solved by ensuring that the helmet straps were all fastened down properly. Once the fit is good and tight, the lift off effects reduced considerably. Thus, a right fitting helmet is essential here. Some of the downhill stretches saw me hit an indicated 50+km/h and I learned the trick is to tilt my head down so instead of a lift, it became a push just like a giant spoiler of a race car.

The nearly 300km we did on various terrains and the wildest of weather conditions, from hot sunny afternoons to monsoon rains of various intensity, provided the perfect testing grounds for the Da Brim. The huge shade it provided around my head ensured that even in the blazing afternoon tropical sun, it was like being under an umbrella. With UPF50+ protection plus a 3.5"front and a 4.5" rear extension, my face, nose, ears and neck did not require sunscreen and at the end of the 6 day trip, I did not have that "raccoon" look. One of the problems of riding in the rain if one wears glasses like me is zero visibility when the water just pours all over your face, making you nearly blind. With the Da Brim, riding in the rain became a brand new experience. Call me crazy but I never had so much fun when it poured buckets for hours while we were riding along Trikora Beach, Bintan. The only problem was when rain started creeping in through the top of the helmet through the vents but this is no fault of the Da Brim. Easily solved with a plastic helmet cover/shower cap. 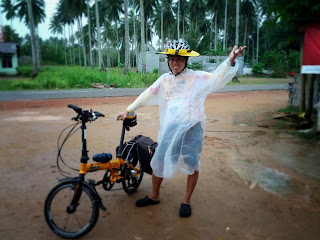 An unexpected bonus of riding with the Da Brim is the amount of attention it drew. This was really important as traffic can spot you from a mile away and because I looked like some Pirate of the Caribbean on small wheels, we were given ample space and some cars/motorbikes even slowed down to have a better look. I really appreciated the safety it provided. Also, it became a very good social magnet and many people came to comment on how nice it is. Some even wanted to try it on and I didn't mind it one bit.

The Da Brim could very well be my best touring accessory yet and this is confirmed by two very respected tourers. I was so surprised when KC, a touring veteran in my cycle group showed up with his home made version of the Da Brim for our trip, mounted on his 25 year old helmet. 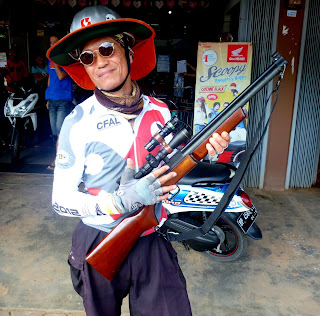 Later, I also pleasantly discovered that Russ Roca, an American chap who tours around the world on Bromptons wrote a stunning review of the Da Brim, calling it "the most functional bike helmet visor ever".

I reckon the Da Brim could very well be the best US$37 discovery for 2012 and I cannot wait to use it again for my upcoming adventure tour to Cambodia and Vietnam in 3 weeks time. I now consider it an essential part of my touring equipment together with my Brooks where the longer its used, the better it gets.
Posted by Oldyonfoldy at 4:22 PM

nice..nice! Not glam but seems to be very useful! Thank Bro Al for this review. I have to try this one day sir!

I really had a great time stopping by your site, it gives me a lot of information. You can also visit my site, thank you!