A spectacular Carry Me crash in Battambang 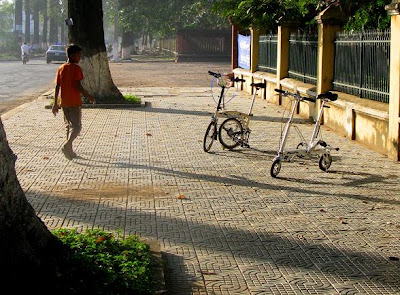 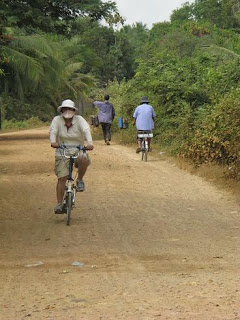 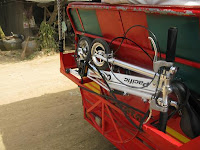 CM recuperating after the crash.
.
.
I've taken 2 weeks before deciding to write about this crash I had in Battambang on Thu Dec 13. I guess I still can't believe it happened.
.
My wife and I were cycling to the Bamboo Train about 5km outside of Battambang, trailing a Tuk Tuk carrying our team. Her 6 speed Brompton could cruise at a good clip while my single speed Carry Me was struggling to keep up with her and the Tuk Tuk. So a brilliant suggestion was thrown to me - why not hang on to the Tuk Tuk and get a free ride?
.
Tempted, I finally relented. Lazy me grabbed on the left edge of the Tuk. It was fun, not having to pedal and flying at 30km/h. Fun until the Tuk had to avoid an oncoming car and moved to the edge of the road. The little 8" wheels of the Carry Me were not too happy going "Cambodian off road" at such high speeds and started going out of control.
.
I had 2 choices - to try control the wobbling bike or to do a John Wayne "horse to train" stunt. Fortunately, my faith in Hollywood compelled me to do the latter and I jumped off the uncontrollable iron steed onto the Tuk Tuk, legs dragging on the ground. It was a pity that this was not video-ed as it would make good "Funniest Movie" fodder. Celia witnessed it from behind and complimented on my acrobatic ability.
.
I wasn't too sure about that and was glad to walk away with just a small scratch and a badly bruised ego. But more importantly, the CM was not damaged at all. Thank God for that.
So much for being lazy! Lesson learnt - no such thing as a free ride in cycling.
More about the amazing Bamboo Train:
http://www.thingsasian.com/stories-photos/28415/6208464/0/hom0_mrec
Posted by Oldyonfoldy at 4:21 PM