Cargo Bike - My next toy? 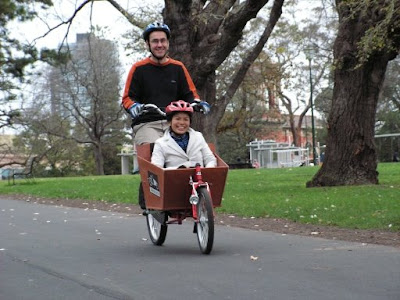 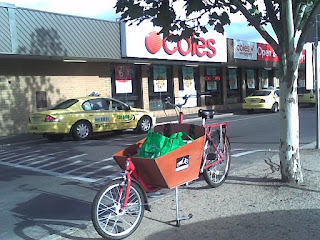 A "no worries" grocery run
I've always been very fascinated with foldies, and in fact all sorts of other interesting bicycles. The biking capital of the world is Copenhagen, Denmark and there, riding a bike is such a part of their lifestyle. The Cargo Bike, which has Danish roots, has caught me attention recently and its a most intriguing way of going car-free. Its basically an extended bicycle with a big box between its wheels.

Its ability to transport kids to school or ice cream treats, go out with your special someone for a nice evening ride, make a trip to the groceries and even haul all sorts of things are wonderful options that the Cargo Bike offers. The social and fun factor in making music together as per the video is awesome! I think it can fit several foldies easily as well.


A beautiful song that goes with a care-free bicycle ride - as it should be!
I've been making some enquiries with Tim Paton from Cargo Bikes Australia and am getting excited. Thinking very hard indeed...

A LHT with four panniers is pretty darn useful and can carry a lot. Having said that a true cargo bike is the next level of performance. Having owned a Big Dummy since the spring I can say that in my opinion the key to enjoying a cargo bike is to use it a lot.

If you only ride your cargo bike once in a while than you end up having to store a huge beast without getting much benefit and you won't feel really comfortable on it when you do ride it.

For people that have lots to haul using your cargo bike is a no brainer, but for most of us who only need to haul big loads occasionally I would suggest getting a cargo bike you'd ride just for fun - without a load.

The Big Dummy is a big bike, but it's very fun to ride even without a load. I often ride with folks that are slower than me so the heavier Big Dummy acts as an equalizer. It handles just as well empty as fully loaded and when unloaded it isn't a wide beast - just long so that minimizes my logistical issues getting it around town.