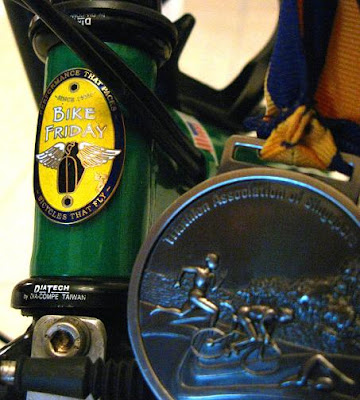 Who says you can't race with a foldy? 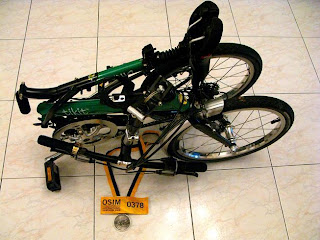 This folded package becomes a "race" bike in 5 secs 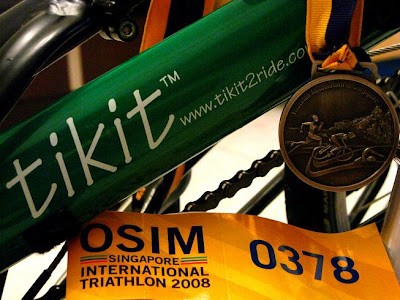 Tri race results OUT! Jem was the fastest Australian (out of 3, where were all the Aussies?) in the 10-12 yo boys category. But what is of interest is that riding the Bike Friday tikit, his 10km time was better than the 24 gear Speed Pro used last year on the same route.

OK, so Jem is older by a year and has gotten a bit bigger and stronger. He did 51:24 last year and has improved his overall time by 5 mins. It could also be the weather was better, maybe Jem had a bigger breakfast, I cheered louder etc but it shows that the tikit is not a slow bike.

Overall in terms of cycling results, the only folding bike beat 70% of the all the cyclists including roadies and other full-size bikes.

Not bad for a boy who spends most of his time playing computer games, and had only one pre Tri ride. Now Jem is encouraged to work harder for next year, and that is what the Tri is about - improving oneself in every sense of the word. And having fun!

This may be a very rough lab test on the performance of the Bike Friday tikit but finishing top 30% in an open bicycle race for the only folder is very commendable indeed. Perhaps its time for an Air Friday next time? 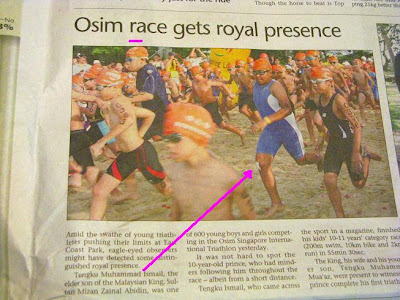 My prince and the Malaysian Prince competing together

*The Malaysian Prince did very well too for his first attempt - 55:31
Posted by Oldyonfoldy at 1:10 AM