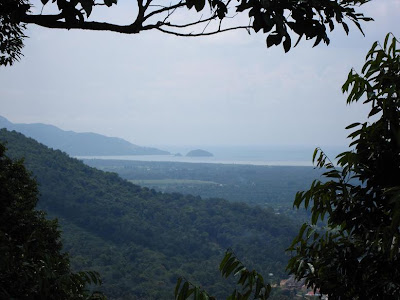 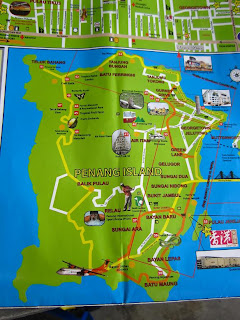 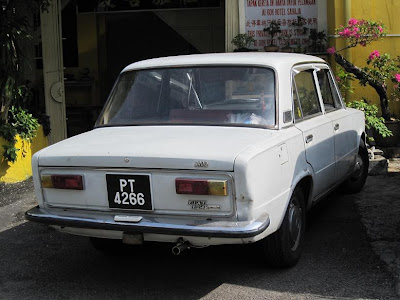 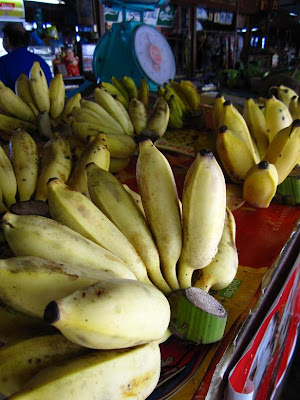 There is something about overeating that makes one oversleep. We didn't get up till 9am and started a little later for our attempt to cycle around the island. Penang is just slightly smaller than Singapore and the circumference can be 80km if you loop behind the airport.

Our first stop was to Batu Ferringi, the main beach area 15km away which was pretty deserted when we got there at 1030. The route was pleasant with a few gentle hills skirting the coast under shady trees. 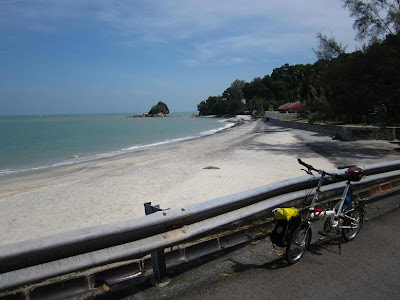 We were determined to eat more healthy after last night's sin of gluttony and settled on a fresh orange/pineapple juice and a delicious plate of cut papayas and watermelons at a friendly cafe. 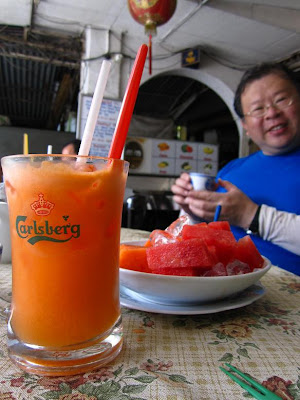 We met a retired Australian couple from Adelaide who were once stationed in the RAAF airbase in Butterworth in the 70s and enjoyed a short chat with them.

Many people will turn back after this point and that is a shame as we found the other side of Penang fascinating. A steep but short climb after the turn off from the coast saw us reach a beautiful dam.
. 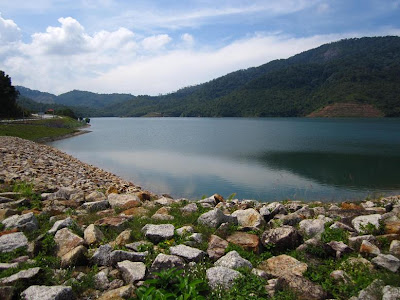 Here, the road becomes narrower and climbs into the hills offering cool respite from the afternoon heat. It was special to ride inside the canopy of trees with crickets singing and the gurgling of streams.
. 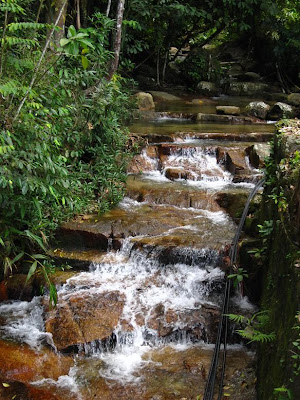 At some points, there are breathtaking views and we were so glad we did this route for the first time. Discovering, exploring, adventuring are what makes bike touring fun. What goes up must come down and come down we did. It was exhilarating carving through the corners at high speed but I was careful not to scrape my brand new Ortelib pannier hanging on my front rack around the bends. 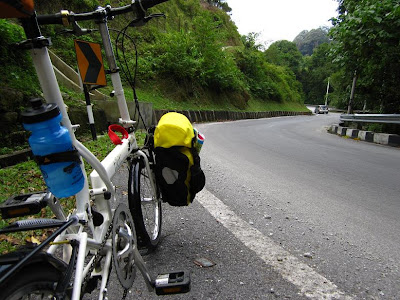 Our target was Balik Pulau, a small town 40km south of the island where we enjoyed another round of the famous Nasi Kandar. All those hills really made us ravenous and we wolved down our spicy lunch with great satisfaction. We thought that it was going to be an easy 20km ride back to town, cutting through the central part of the island but we were dead wrong!

The road began gradually for the first 400m, and then it was a cruel climb of 940m in only 3 short km. Despite my valiant attempt at riding up, I had to get off the tikit and pushed ALL the way up. My left knee was somehow hurting badly so I guess that was the perfect excuse I needed not to ride. 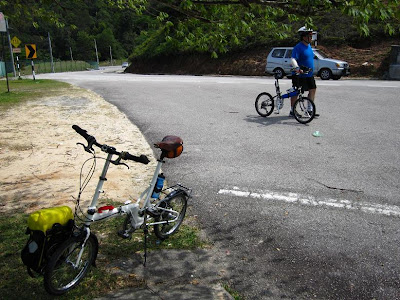 Even with the smaller 42t chain ring, it was tough to climb this stretch. Both Mike and I perspired profusely and we were so relieved to find a drink kiosk at the top of this torture. The Langkawi Cable Car peak was only 700m so we did felt a sense of accomplishment, even though we pushed.

Once again, such hard work uphill resulted in a blast of a downhill where my tikit exceeded 60kmh easy. At such speeds, I truly appreciated the stability and rigidity of its well-engineered frame and it helped too that the brakes were meaty and could scrub off the speed when needed. 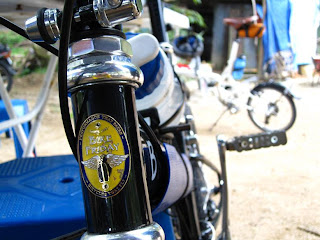 Mike who rode the Expedition also commented on how secure and confident he felt on his Friday! I guess hills are like pregnancy - though the climb was hard and painful, the wonderful end result made it all worth it and the pain is quickly forgotten.

We arrived back at our hotel just after 5pm but not before battling the heavy evening traffic. After a quick shower, I rewarded myself with a Thai foot massage to soothe those aching muscles. It was really kind and magnanimous of Mike's school mate, Chor Kooi to host us a sumptous dinner at the Penang Swimming Club and we enjoyed getting to know his warm extended family and especially his lovely children. 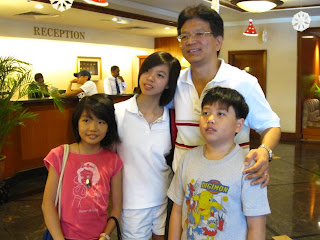 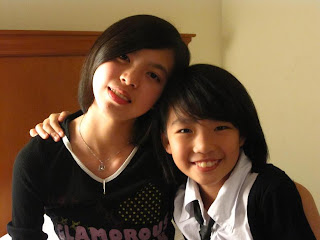 Being Penangites, they were bemused that we actually cycled this crazy route and came back in one piece. Ignorance, they say, is bliss but I will recommend this anti-clockwise route to anyone who loves a challenge.
Posted by Oldyonfoldy at 3:31 AM