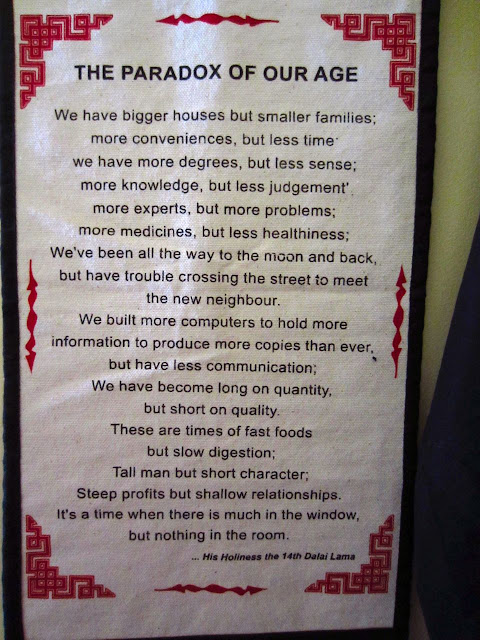 Hanging on the wall of our room at the Blue Wren YHA. Words of wisdom from the Dalai Lama lamenting on the state of modern affairs. So what really matters in life? A millionaire cosmetic surgeon who died Oct 18, (the day this trip was done) echoed these thoughts, and has this to say. Riveting! 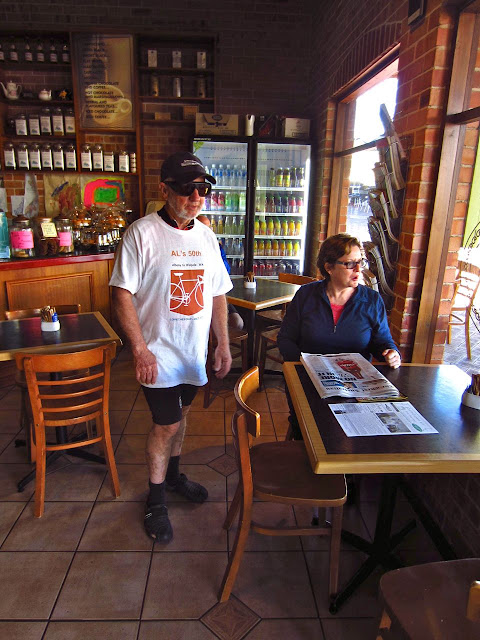 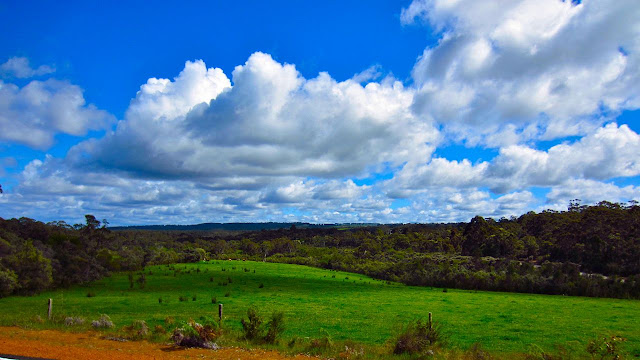 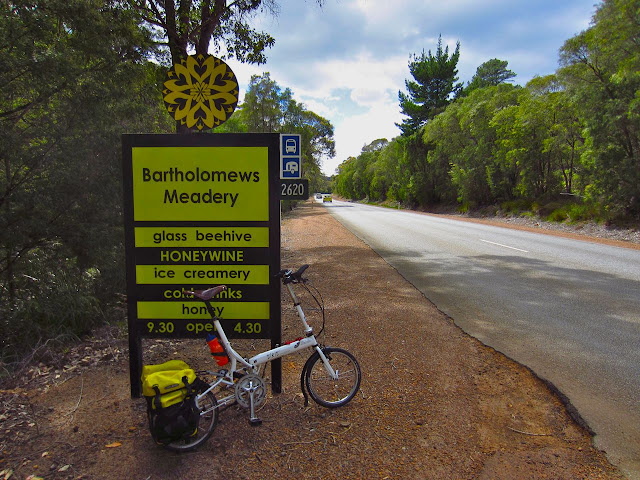 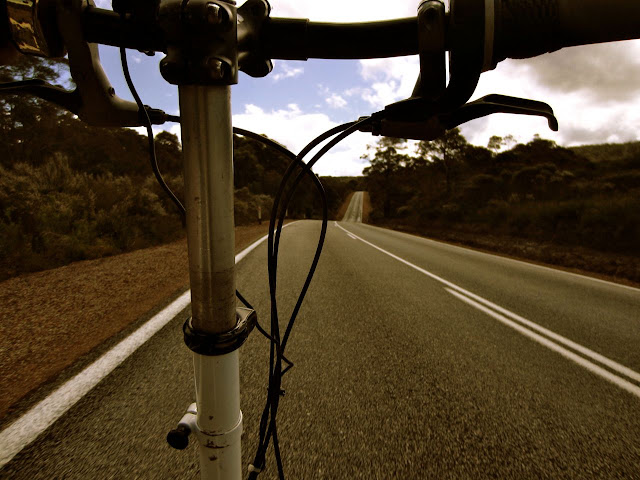 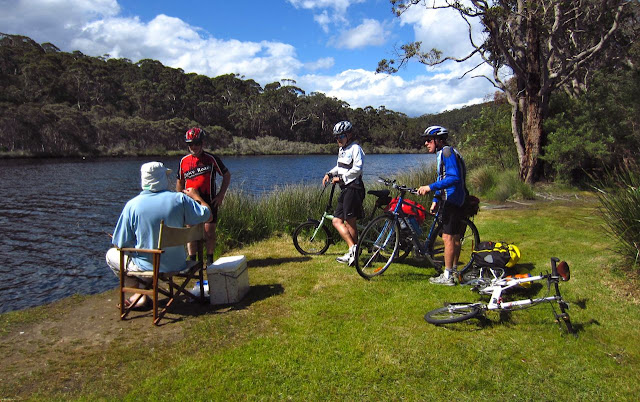 My first day as a 50 year old was not promising. Graham the YHA manager warned us that the 65km to Walpole was somewhat hilly and that took the wind out of our sails. I encouraged myself that it cannot be worse than my 3275m climb to Wulin 7 months ago in Taiwan but when a seasoned MTB says it, it is disconcerting.

We packed our panniers, loaded the bikes and said goodbye to Graham and his wonderful Labrador, Flint. First stop was breakfast and we found a lovely cafe, opened at 745am. As per our style, we ordered 3 big breakfast and shared among 4. It was good but Cosi yesterday was somewhat better. Attractive service is a big plus I guess. 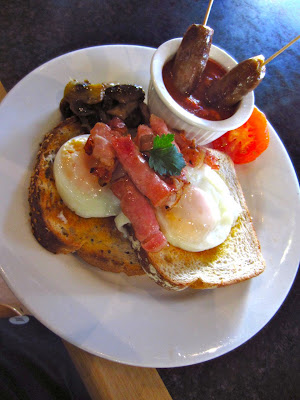 Getting out of Denmark, we grudgingly pushed our loaded bikes up the hill towards Walpole to warm up and to prevent us from throwing up. They say we get strongest on the 3rd day of riding so we hoped that's true. It was not a good start as indeed, the hills came early. What didn't help too was the cycling lane disappeared 3km out of town and while waiting for the rest, a Magpie did a dive bomb on me. Fortunately, it narrowly missed me. I now remembered why my friend Patrick Khaw had "antennas" coming out of his helmet.

It was obvious that this was going to be a hard slog but the promise of honey ice cream at the 16km mark kept us going. The lady running the Bee Farm came out excitedly to check out our small wheels. She herself is a cyclist and has not seen foldies touring this region yet. We ordered the largest scoop of 3 flavours to share and it was heavenly. 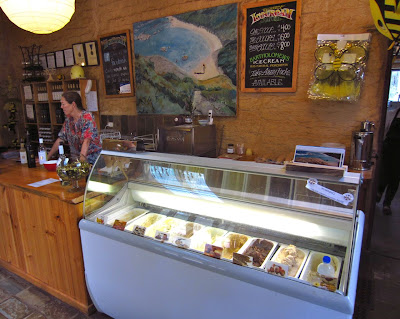 Moving on, we enjoyed the long downhills while it lasted and struggled painfully up those long climbs. Kenneth was very kind to take over 70yo Ken's pannier so that it was slightly easier for him. They say its through hardships that friendships are forged and that is so true. With half his load gone, Ken found his second wind and we were glad. 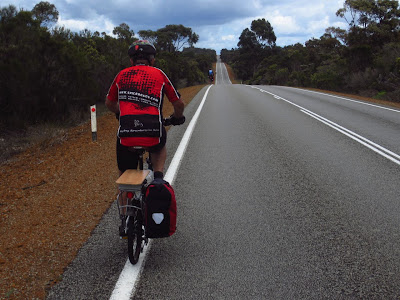 The group was now very spread out as the hills separated the men from the boys so to speak. One way to make things a bit more comfortable and even was bike swapping. We put Ken on Rod's 700c hybrid most times and that gave him the best mechanical advantage. The trick to conquering rolling hills is to ride down at maximum speed and use the momentum to bring you up. 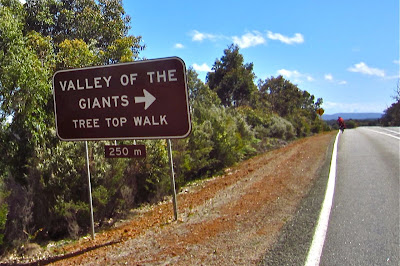 That's the theory anyway but often, I found momentum can only bring up so much and then, its back to grinding the crank labourishly. I can see the need for an e-bike to assist us oldies up those climbs in my future tours. At 50, we are technically senior citizens in some countries so we are entitled to some "assistance".

This stretch was particularly scarce for drink/food stops and the next one was at the 45km mark at Bowbridge. 30km does not seem like much but with killer hills, it felt like 90km. It was heartwarming to spot 2 fully loaded touring bikes coming in the opposite direction and that lifted our spirits. I quickly whipped up my Ixus to shoot them and we waved to each other like school kids. 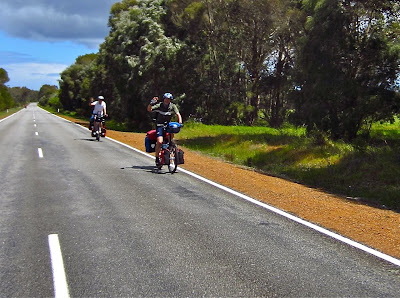 We were so relieved when we arrived at the Bowbridge Roadhouse where we refuelled on pies and sandwiches. The kitchen was closed so we could not have a hot meal. However another 10km further at Nornalup, Graham told us about tea rooms which had tea and scones and we saved our stomachs for that. While taking a break, it started to rain and we used that as an excuse for an extended rest. It was fun seeing all sorts of vehicles from motorbikes, cars with boats, campervans all pulled up for a break. This is home to the Tree Top Walk in the Valley of the Giants but since we all have been there, we pressed on. 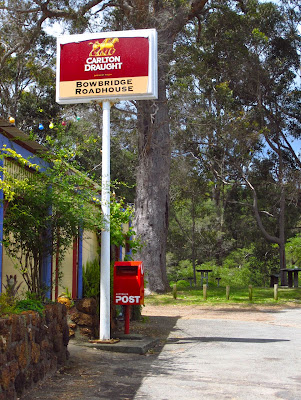 Arriving at Nornalup, we could not find the Tea Room. Riding around the small town led us to a beautiful river side where we saw a man fishing, enjoying himself. He said the young couple who ran the famous Tea Room closed down a few weeks back and it was a shame as they served really top quality food. Our stomachs were so disappointed at hearing this news! 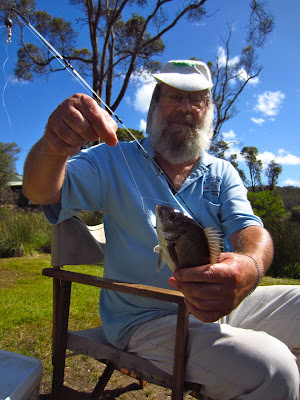 Looking at the weariness written all over our faces, he encouraged us by saying one more big hill to Walpole, and we are done. Only another 10km to go. Also, he told us the best places to eat in Walpole and that was the type of news we wanted to hear and got us springing.

The 10km to Walpole went by quickly despite there having more than one big hill. There were long downhill stretches that we got us really flying. It took us 45 mins to do the distance and when we arrived at Walpole, our first order of the day was to eat. We found of all places, a Philippine restaurant which sold pretty nice Asian food and we enjoyed that very much. Rod celebrated with a calorie laden sweet milkshake.

The YHA Walpole was the first building to greet us when we entered and it was very well run by a mid age lady, Peggy who struck me as being a most organised person. The buildings were old and could very well be like being transported in the 1960s but it was clean and functional. The kitchen especially was so well kept we could eat off the floors so kudos to Peggy! It also had a very spacious lounge area and free internet. 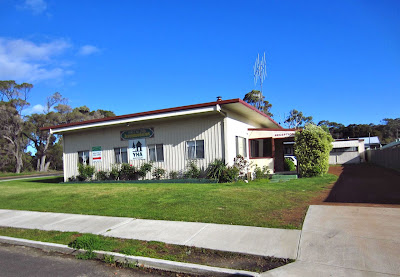 Ken was to catch the 430pm bus to Albany to collect his SUV which was parked at his cousin's home. Trust Rod to tag along as it was better for Ken not to be driving alone in the dark back to Walpole. It helped that being Senior Citizens, the usual fare of $25 was only $10. 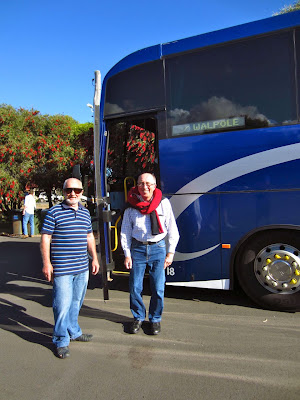 The reward of his thoughtfulness was being able to join in for a nice home cook freshly baked Quiche, which made Kenneth and I so jealous. Nevertheless, we had a nice dinner too and Kenneth kindly gave me a birthday treat. We enjoyed speaking to the waitress who was on a working holiday visa from Albania. Trust Kenneth to chat up the girls!

At 930pm, Ken and Rod returned beaming. What took us 2 days to ride, took him 2 hrs on his turbo diesel SUV. Our ride has ended. We have done 200km all in and enjoyed ourselve immensely. We also managed to keep to the $50 a day budget! But like always, we look forward to new beginnings, touring wise. What a great trip it has been and our lives have been enriched and deepen through spinning together on small wheels across the beautiful south-west coast of Western Australia. It's a birthday ride I will never forget. Anyone for the Great Ocean Road, Victoria next year? 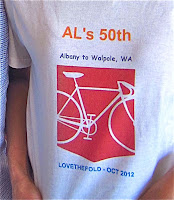 Posted by Oldyonfoldy at 7:52 PM

Very nice friends you have and all adding up to almost 3 decades! What a ride today.

I recalled that stretch of road has very little rest stop. Most are home run petrol stop and they are like 50-100km apart!

I missed the tree top walk too! Did you guys pay a visit?