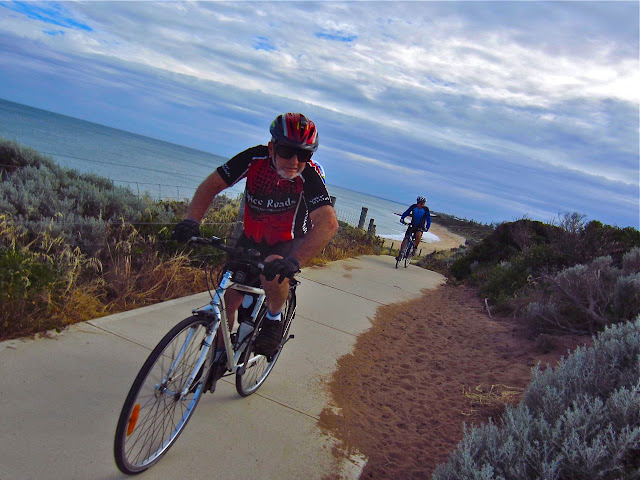 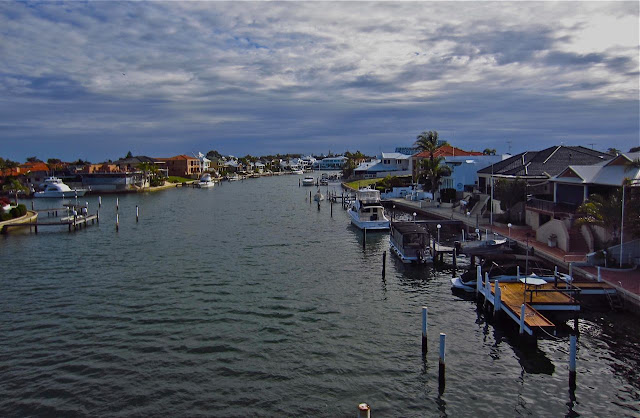 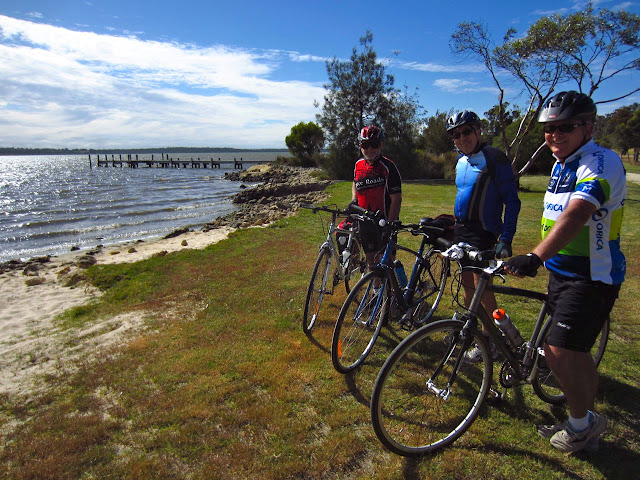 Its been a while since I took the 94 XO5 for a spin and what better way to do this than to go out with her cousins, all spotting 700 wheels. Rod had his brand new Giant Cross City, Peter his Specialized Hybrid with a carbon fork and Uncle Ken on his 20 year old restored Shogun. This was the first time we all rode 700c bikes!

Our destination was Mandurah and I caught the 610am train down. It got a bit chilly so Postie Rod took the lead when we got off the train to ride to Ken's home at break-neck speed. His rationale was to get our blood flowing. Not only was my blood flowing but I was gasping for air when we got to Ken's home. I certainly did not feel cold at all after that 4km sprint where we were cruising at 30 - 35km/h in biting cold weather.

It was lovely to ride along the spectacular coast once again and gliding on big wheels was refreshingly different from our foldies. Big wheels seem to be happier rolling once on the move but making sharp turns was like turning the Titanic (after 16" wheels) and occasionally, the wheel hit my foot. 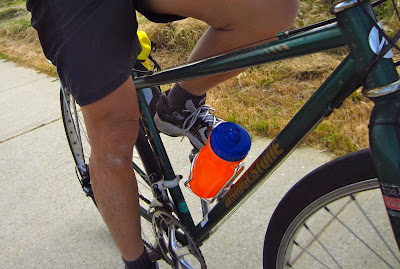 Also, climbing and starting off seemed harder and I think its got everything to do with initial weight. After all ceteris paribus, a 700c is heavier than a 20" wheel. 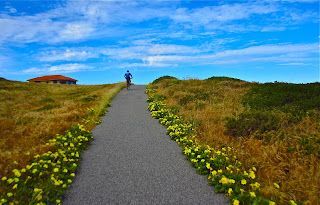 I was surprised at how nicely my XO5 still rode after all these years and it brought me back good memories when I toured down the East Coast of the Malaysian Peninsular some years back. What is unique about the X05 is its "priest" handlebars where it is a semi-curve arc, which made for a most natural and comfortable position. The French priests of old used to visit their parish on bicycles with these style bars, hence its name. 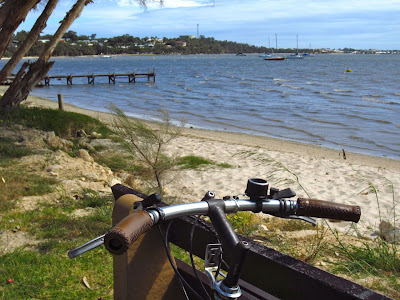 With the tail wind behind us, we were flying! It was special to come across a bunch of school kids on skateboards and Pete and I allowed them to hitch a ride from us. Always very special to talk to a bunch of fun loving kids. This young student April was going for her Japanese exams in school.


We arrived at Dawsville Cut in no time and we proceeded another 10km to our regular picnic spot. Its always nice to have morning tea here where there is a jetty that never fails to have birds drying their wings, and even the huge Pelican every now and then. I forgot to bring my kite and usually, the territorial Galas would dive bomb my kite when I got it up, making for exciting entertainment. Our morning conversations centred around touring the Great Ocean Road and behold, the planning has begun! 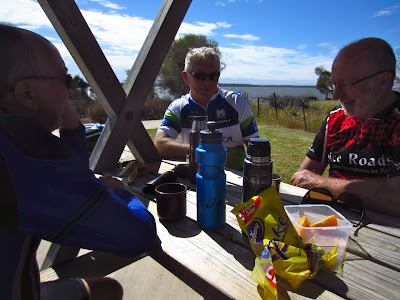 Morning Tea #2 came at the ex-Jolly Frog Restaurant now known as Hot Rock Cafe which offered spectacular views from inside. The coffee+cake special at $8 was good value and we enjoyed our time there very much. 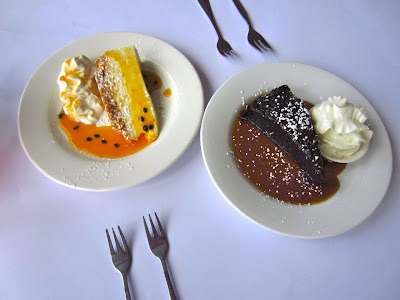 Riding back to Ken's place was tough as the wind was against us and it was hard work. I think our speed dropped to 14km/h but like most things in life, there is seldom a free ride. It was a great workout nevertheless! 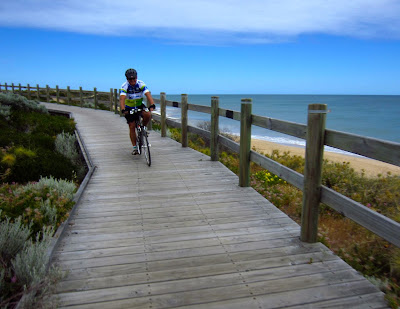 We got back to Mandurah Train station at just before 12pm and covered 55km all in. Not bad for a morning's ride with the 700 Club!