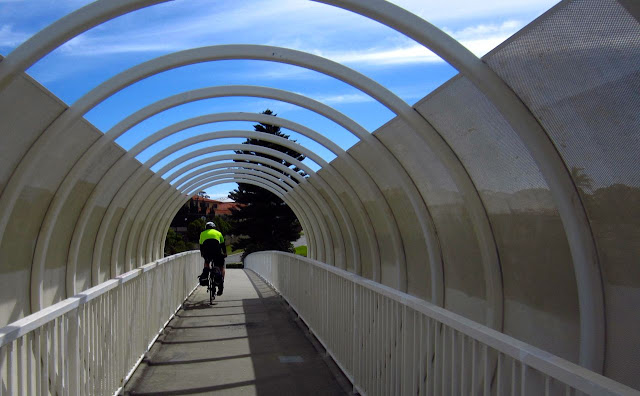 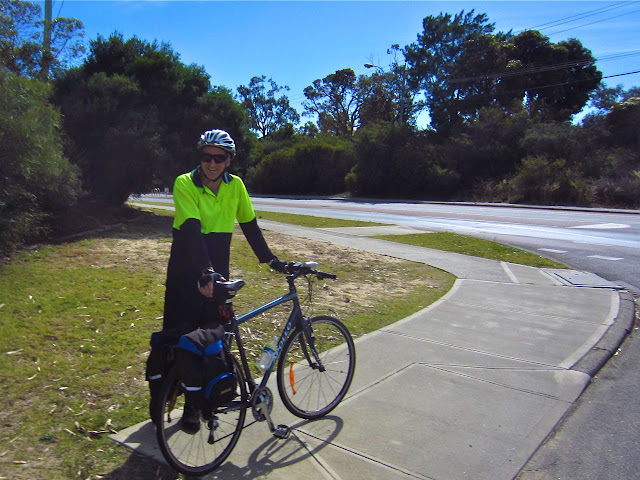 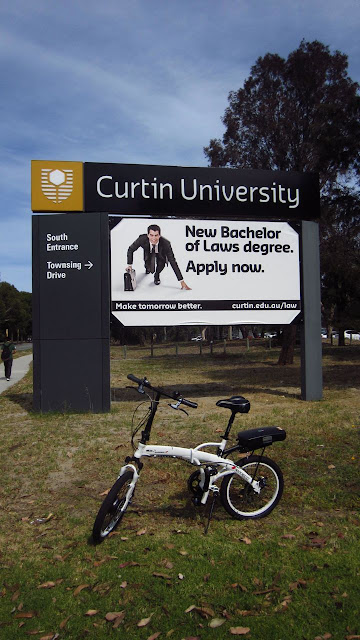 I've know Ian for sometime now but what I didn't know was that he rides to work daily on his hybrid to Curtin Uni. That got me very excited because I think people who commute by bike are everyday heroes. They are doing their bit for the earth, in great shape and all of these heroes I met are super nice folks.

Last week I decided to ride with him to uni as I wanted to check out the best route to Curtin from my home. This worked out really well as Ian just lives in the next suburb so we had a riding "date" last week. I couldn't decide whether to use the Prodeco E-bike or my Speed Pro. Well, I figured e-power will be intriguing especially for this engineering professor as technology is very much a part of his heart beat. 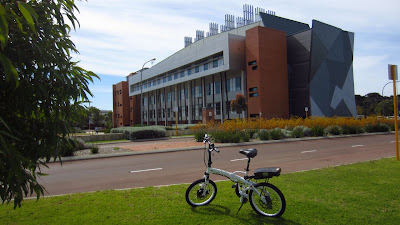 Met Ian at 830am and there he was, waiting for me in his safety luminous vest and panniers at our agreed location. His route is 10km and his usual way of going to work is via the Mt Henry bridge, up the Kwinana for 1km, then turn off to Salter Point, through Waterford and that's it. Sounds easy enough until I realised Ian is not your everyday commuter. He is a commuter on steroids and he sits at 30km/h, carves corners at break neck speeds and makes hills look like a ride in the park.

Ian grew up in a farm and has been riding since 5. That explains his confidence and remarkable agility. Ian used to run to keep fit but as with all of us mid decade champions, our joints get squeaky. So he fits in one hour of riding everyday in his routine in place of his runs.


Ian loves this ride because it is scenic and I totally agree with him. It is mainly on bike paths and hugs the northern part of the Canning River, going through leafy suburbs with zillion dollar homes. However, there are some serious hills and Ian mentioned one of his colleagues tried cycling to work once through this route, and gave up. But one thing is assured, you do reach the destination pretty fresh and invigorated. 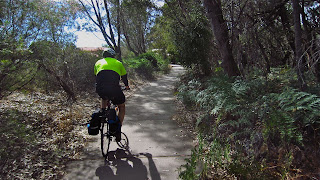 I was so glad I rode the e-bike because I had to use full throttle just to keep up with Ian. The only time I could lead him was on the uphills. Other than that, I had to use both engines (e-power + human power) to keep him in sight. We completed the 10km ride in 25 mins flat including waiting time to cross the busy morning roads. All in, a really fun morning with the flying professor.

Posted by Oldyonfoldy at 5:45 PM